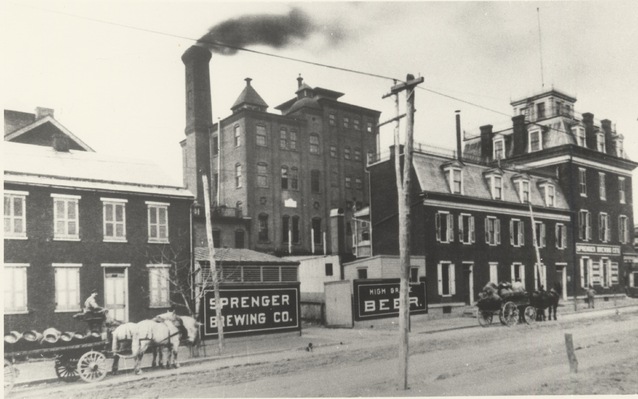 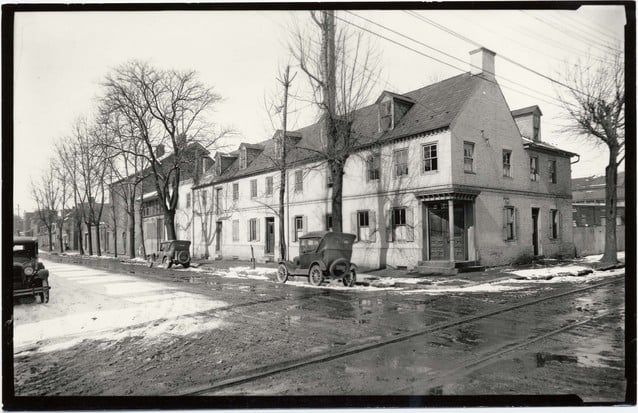 When Columbia Brewery was raided and the beer was dumped during Prohibition, people raced to capture it downstream.

We don’t know exactly when the first beer was brewed in Lancaster County, but it was likely very soon after Europeans arrived in the early 1700s. Brewing traditions had been well-established in Europe for hundreds of years, and those traditions simply moved to North America along with the settlers.

In the first half of the 18th century, brewing was a task that occurred not in breweries, but in the back rooms of taverns and inns throughout Lancaster County. The beers made by local innkeepers were generally in the English style, meaning they were ales – fermented at warm temperatures by top-fermenting yeast. The resultant brews were relatively dark, cloudy and strong.

Gradually, around the middle of the 18th century, brewing moved out of the back rooms and into proper breweries. By 1773, there were two breweries functioning in Lancaster. That number rose to at least nine by 1810, by which point Lancaster County was producing 7 percent of the nation’s beer.

In 1840, John Wagner of Philadelphia reportedly introduced American drinkers to lager beer, a German style that was drastically different from the English ales that dominated the American beer landscape at the time. Lagers were fermented at cold temperatures by bottom-fermenting yeast strains, and they were light and clear in appearance and crisp in taste.

Thanks to the large number of German immigrants in Lancaster County, lager brewing caught on quickly here. John Wittlinger brewed the first lager in Lancaster in 1842 at what would later become the Rieker Star Brewery on West King Street.

Demand for lager began pushing local production numbers higher, a fact which was only magnified when word of Lancaster’s high-quality beer spread beyond Pennsylvania.

“Lancaster in America occupies the same position that Munich does in Germany in regard to this branch of industry. The fame of our beer has spread over the whole Union, and wherever we go, whether North, South, East or West, ‘Lancaster Lager Beer’ is known.”

In 1873, the county boasted 14 lager breweries – not just in the city, but from Columbia to Lititz to Mount Joy. By the early 1900s, as breweries continued to crop up, the workforce numbered in the hundreds and annual output ballooned to 6.2 million gallons, or 37 gallons of beer for every county resident.

Lancaster’s distinction as “the Munich of America” had stuck, and the county’s reputation for quality brought with it some high prices – kegs of Rieker Star lager sold in Boston for $10, nearly $250 in today’s terms.

Ironically, it wasn’t Prohibition that drove the first nail into the coffin of local brewing. It was World War I. Fuel restrictions cut back on the amount of coal that could be used, meaning that by the time Prohibition passed in 1919, only five breweries remained in the county – the Rieker, Wacker, Sprenger, Haefner and Columbia breweries.

Breweries struggled to find something else to produce during Prohibition. Some brewed “near-beer,” others made soft drinks, and still others tried to survive by selling ice. Of course, there were those that continued producing beer illegally.

One such was Rieker, which secretly pumped its beer through hoses run through basements and sewer lines so it could be bottled and shipped to Canada for sale. In 1931, the hoses were discovered and state police shut down the operation. Newspapers covered the story daily, including a tale of two dwarfs who installed the hoses.

A similar raid shut down illegal operations at Columbia Brewery in 1932, resulting in more than 200,000 gallons of beer being dumped into the borough’s sewer drains.

In December 1933, Prohibition was repealed, but Lancaster’s brewing industry was unable to recover. As was the case across the nation, the few small breweries that had survived Prohibition couldn’t compete with the rise of the massive factory brewers that would soon dominate the American beer landscape.

In 1935, there were four breweries left in Lancaster County; in 1950, there were two; in 1952 only Wacker remained. Despite making its best effort to modernize and expand, Wacker was unable to compete with the massive Midwestern brands such as Budweiser, Miller and Coors. In 1956, Wacker brewed the last batch of beer to be made by a Lancaster brewery for nearly 40 years.

Throughout the 1960s and ‘70s, American beer was largely mass-produced and cheaply made. Drinkers who craved higher-quality brews opted for imports, even at much higher prices. In the 1980s and ‘90s, the rise of microbreweries and brewpubs brought the idea of locally made, high-quality beer back into the public eye.

The trend reached Lancaster in 1987, when Stoudt’s Brewery opened in Adamstown, adjacent to the long-standing Black Angus Restaurant and Pub. In 1995, Lancaster Malt Brewing (now Lancaster Brewing Company) opened in a former tobacco warehouse at the intersection of Mulberry and Plum streets.

Brewing had finally returned to the “Munich of America.”

Over the last 20 years, breweries, brewpubs and craft beer tasting rooms have proliferated in the county. Some have been short-lived, but the majority have survived their early years to become part of a thriving craft beer scene that’s drawing acclaim throughout the mid-Atlantic region.

There are currently 22 breweries operating in Lancaster County, with at least three more in the planning stages. Beer has fully returned to the county, with hand-crafted, local brews on tap not only at brewpubs, but also at countless bars and restaurants throughout the region.

Inside Outstanding in the Field, the $235 a ticket farm-to-table dinner