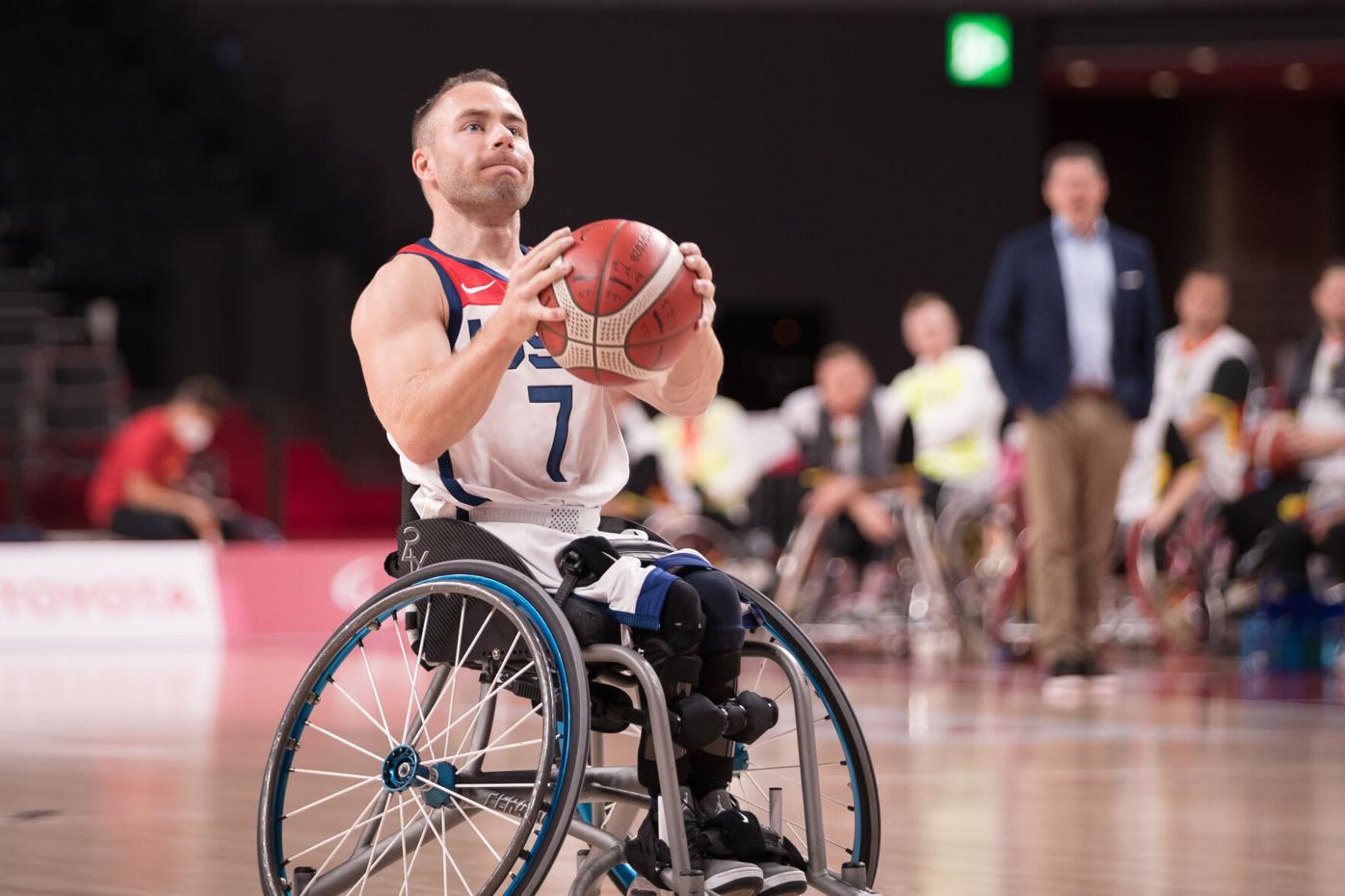 Ryan Neiswender looks up, preparing to make a shot into the net. 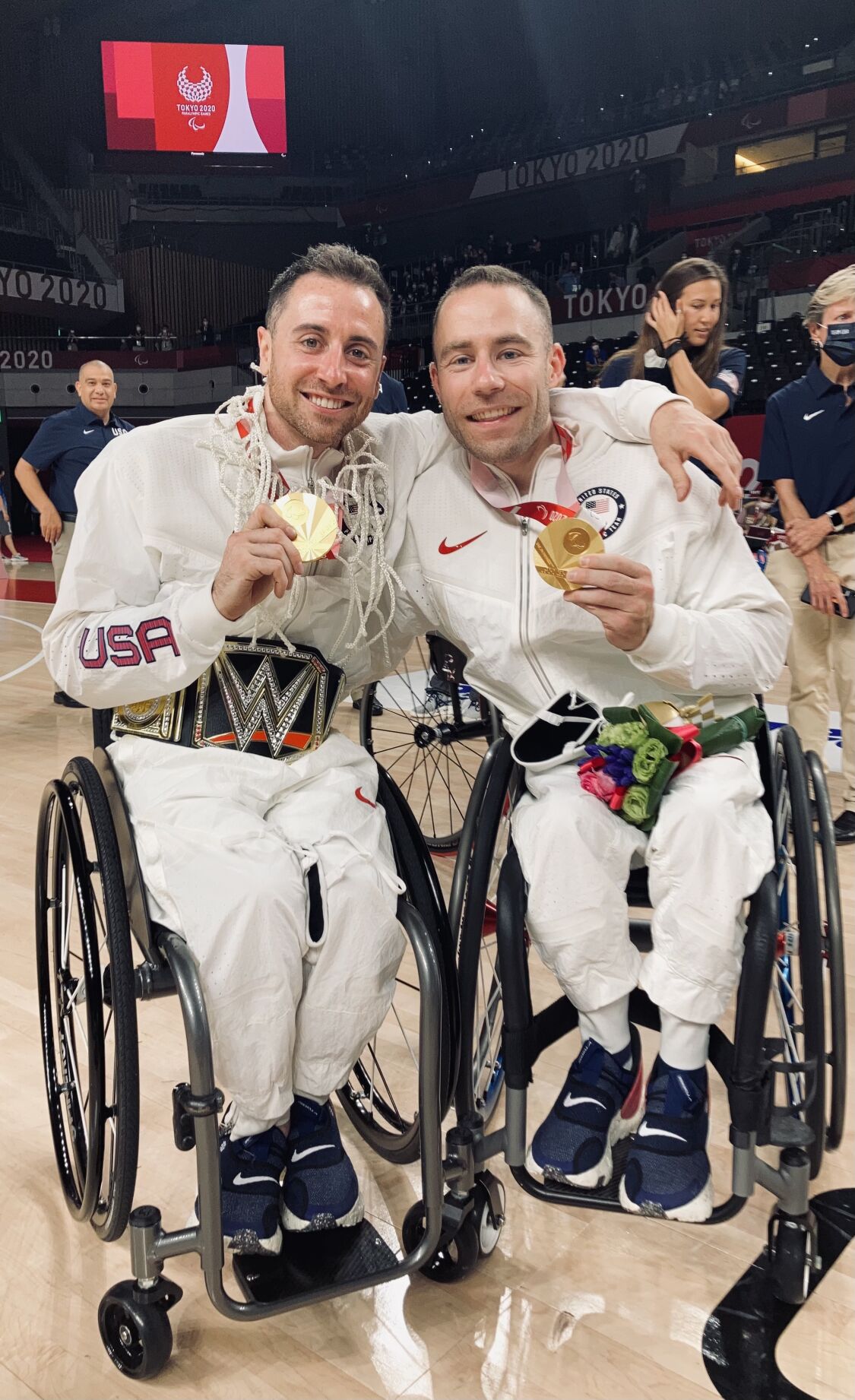 Steve Serio and Ryan Neiswender hold up their gold medals on the court after contributing to the 64-60 win Team USA took over Japan. 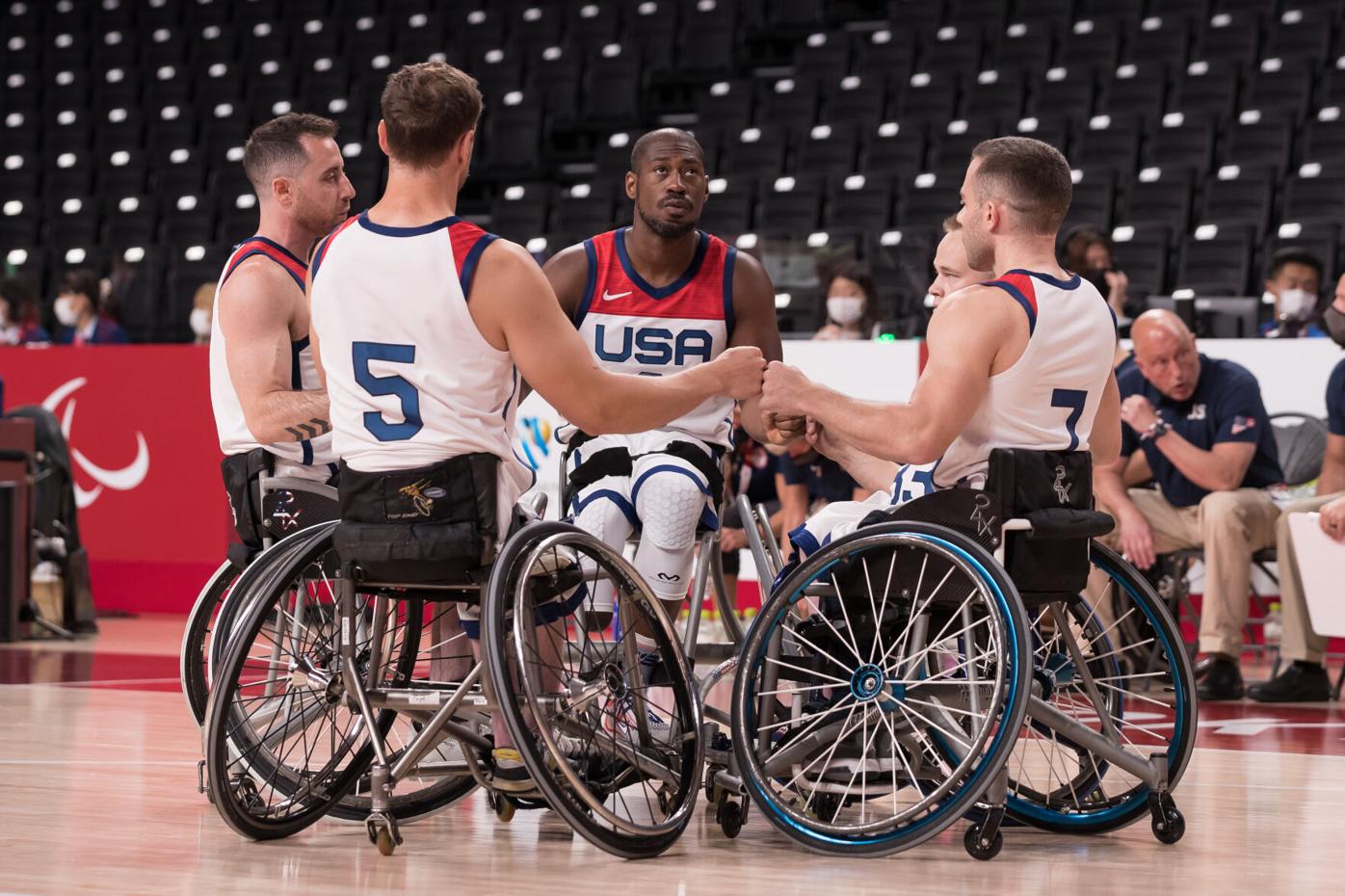 Ryan Neiswender and his teammates gather in a circle on the court as they prepare for the 2020 Tokyo Paralympics.

Ryan Neiswender makes his way down the court in his number 7 Team USA jersey. 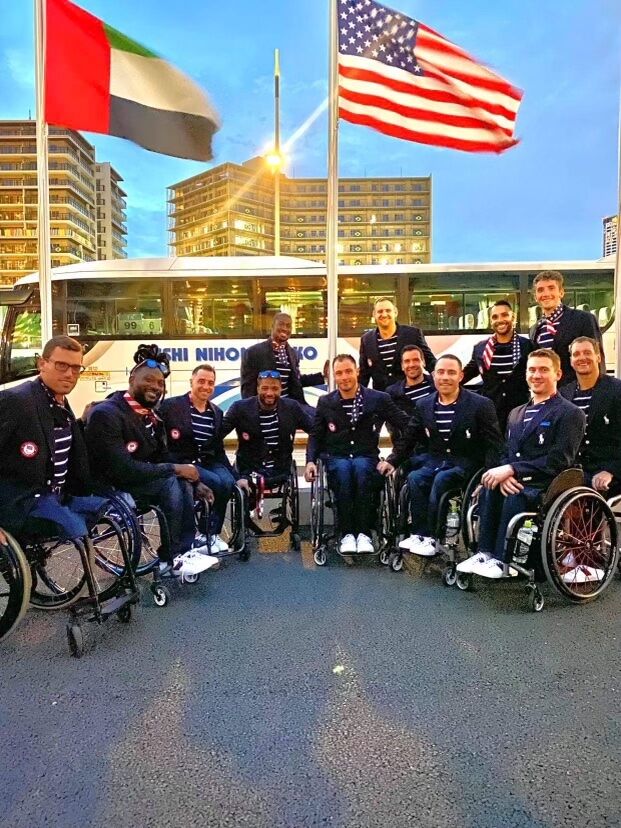 Ryan Neiswender and his team USA teammates pose by the American Flag in Tokyo. 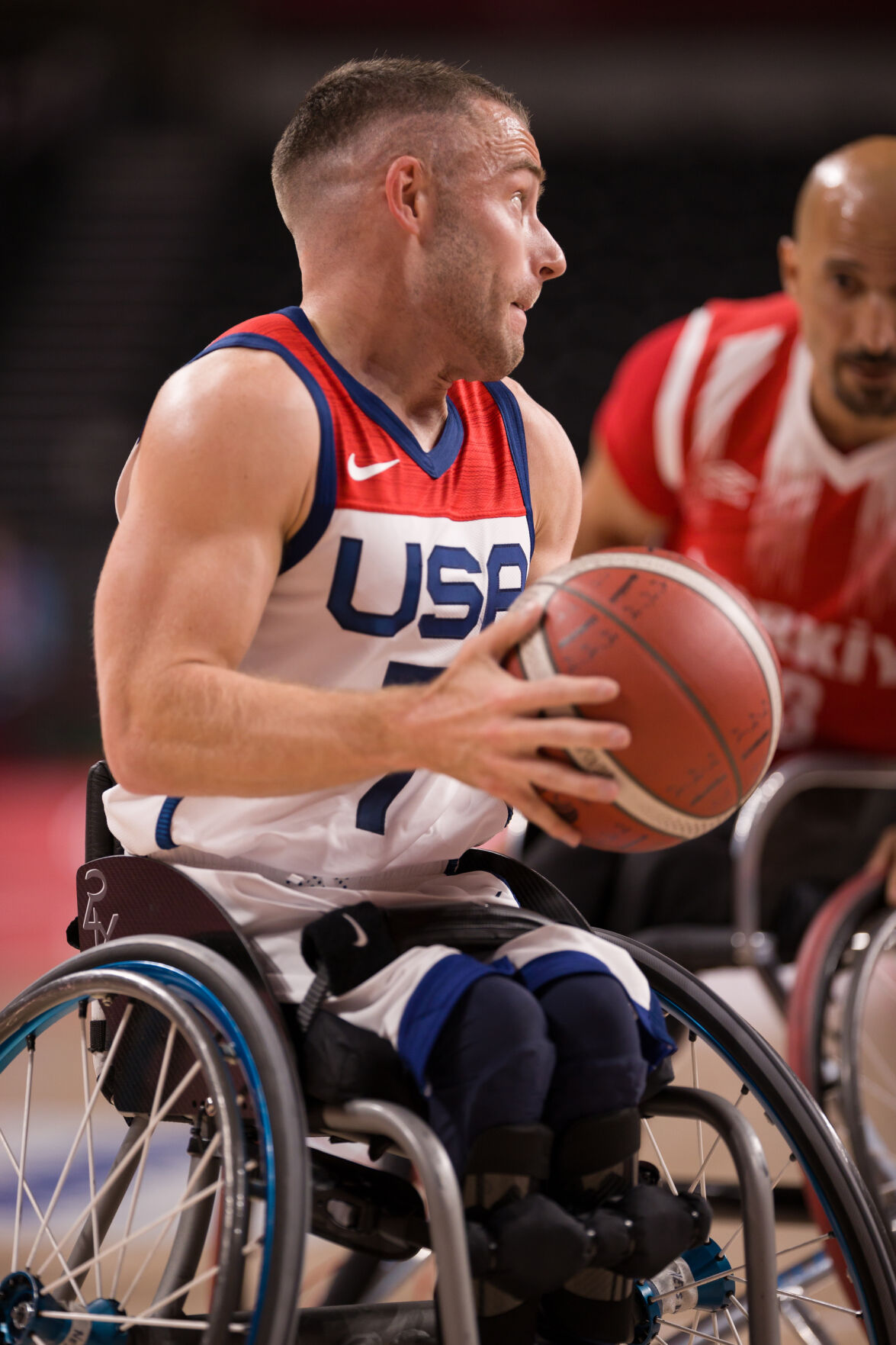 Ryan Neiswender keeps a firm grasp on the basketball, defending it from competitors in the 2020 Tokyo Paralympics.

A newspaper clipping changed the trajectory of Ryan Neiswender’s life.

At 27 years old, he won gold as part of Team USA in the 2020 Tokyo Paralympic Wheelchair Basketball competition.

“If that newspaper article wasn’t written when I was 8 years old — I mean maybe we’d find it (wheelchair basketball) — but I’m not 100% sure I’m where I’m at today,” Neiswender said. “There’s a ton of 8-year-old Ryans out there that don't know about adaptive athletics …. I hope newspaper articles like this may unlock that door for another 8-year-old Ryan to go pursue his dream and reach his untapped potential.”

Born with arthrogryposis, a muscle disorder that prevented the joints in his legs from developing properly, the South Lebanon Township native has been on the U.S. wheelchair basketball team every year since his 2013 graduation from Cedar Crest High School in Lebanon County.

For major competitions, like the Paralympics, the team is cut down to 12 with four alternates. Neiswender was an alternate for the 2016 Rio Paralympic Games, but made the final Paralympic team for the 2020 games.

“This is my breakthrough,” he said.

With this year’s win against Japan, the US became back-to-back Paralympic champions, following a 28-year drought of gold medals from Toronto 1976 to Rio 2016.

“It's hard to put 20 years into a moment, but I think the best way to describe it was when the medal was put on my neck, the weight that the medal had,” he said. “I could feel the 20 years of work and the people that went into the process.”

Neiswender and his teammates weren’t sure they’d get the chance to compete, let alone win gold at the Paralympics this year.

Due to COVID-19, the 2020 Olympics and Paralympics were pushed back to 2021. Neiswender used that time to train and prepare himself for whatever the competition might look like.

Though the team got the green light for competition, spectators were excluded. Neiswender’s parents, including his father who had never missed a game, stayed in the U.S.

“We were excited for him. And we were also excited for us,” said Ryan’s father, Daryl Neiswender. “We were disappointed that we couldn't go, but we were so thankful that Ryan did make the team and then we just prayed as a family that he would be given the opportunity to go and play.”

Toyota sponsored a friends and family celebration in Colorado Springs, Colorado, where the United States Olympic & Paralympic Committee is based. Attendees had a full itinerary, including a tour of the USOPC Museum, and plenty of TVs that showed the Paralympics 24 hours a day.

Toyota “just tried to make the experience joyful and happy,” Daryl Neiswender said. “They knew the disappointment of the families that they couldn’t go to Japan. It was really a great experience and they did a wonderful job of taking care of us.”

Cardboard cutouts of the athletes were even placed in the ballroom, hotel lobby and several other locations, according to the Team USA website.

Despite a total of 5,770 miles between Colorado and Tokyo, the Neiswenders felt included in the games.

“You’re a lot more nervous,” Daryl Neiswender said. “Your heart is pumping. I think every play is so important. It’s more important than if you’re just watching it as a bystander or a fan.”

From Tokyo, Ryan Neiswender experienced not only the nerves of competition but the stress of preparing for the game of a lifetime under strict COVID-19 precautions.

From the plexiglass at the dining hall to the need for gloves, masks and plenty of hand sanitizer, Ryan Neiswender said the team “definitely knew COVID was present.”

And the team was not lucky enough to make it through the Paralympics without a COVID-19 scare. After the semifinal game between the U.S. and Spain, Ryan Neiswender and his teammates were notified of a close contact with an Iranian wheelchair basketball player who tested positive for the virus.

“For the remainder of our time in Tokyo, we were quarantined in our rooms,” Ryan Neiswender said. “Getting ready for a gold medal-winning match and not being able to leave your room was definitely tough.”

The team, however, had a knack for bouncing back.

In the team’s final game against Japan, they were down five points with under five minutes left. Yet the U.S. secured a 64-60 win that fulfilled Ryan Neiswender’s childhood dreams.

“When I look at 8-year-old Ryan, I don't think he knew all that it was going to take to get to that dream, but I think he believed it was possible,” Ryan Neiswender said.

Ryan Neiswender attributes his success to the sacrifices his family, including his wife, Lauren, have made. In the last few months, he said he’s spent more time with his teammates than he has with Lauren. And, in the past month, the two moved to North Carolina to follow his wheelchair basketball training and job.

“Not many people get to live out their childhood dream and it's because of not only the work and dedication that I've put into it,” he said. “It's my wife, making the sacrifices to travel and live in different places of the country so that I can train, it's my parents that give up every weekend throughout the basketball season.”

For years, Ryan Neiswender’s parents drove him two and a half hours to Baltimore twice every weekend so he could practice with a full team.

“It speaks to my parents’ ability and desire, and the love to want the best for me and want to open up as many doors as possible,” Neiswender said. “I don't think they would have done it if I wasn't as passionate as I was, but it was something that I really wanted to do and they wanted to make that possible.”

Neiswender was brought up in an athletic family. His father was a coach for the Cedar Crest soccer team and his sister, Lauren, played tennis and soccer. Even his friends were heavily involved in sports.

But the Paralympics weren’t on Daryl Neiswender’s mind when he drove his son to his first basketball clinic 19 years ago.

“We just wanted to give him a chance to experience sports and to enjoy playing sports, but one thing we did notice was he was very passionate about sports in general,” Daryl Neiswender said.

Daryl and his wife, Peg Neiswender, still live together in South Lebanon. The couple taught in the Cornwall-Lebanon School District before retirement.

“It's my family that supported me along the journey, it's the community that empowered me,” Ryan said. “It's my faith that really laid that foundation for me to be able to play free, play confident, play with joy.”

Lebanon Catholic returns to the county under a new name

Lebanon – After a yearlong hiatus, Lebanon Catholic School plans to return for the 2021-22 a…

Nearly 44% of Lebanon County residents identify as Hispanic, according to Data USA, but Spanish-language news outlets are few and far between.

Elizabeth Lynch, adopted from Germany when she was 3 years old, had no idea she had a biological brother or that he had been searching for her.

Here's when trick-or-treat, other Halloween events are in Lebanon County