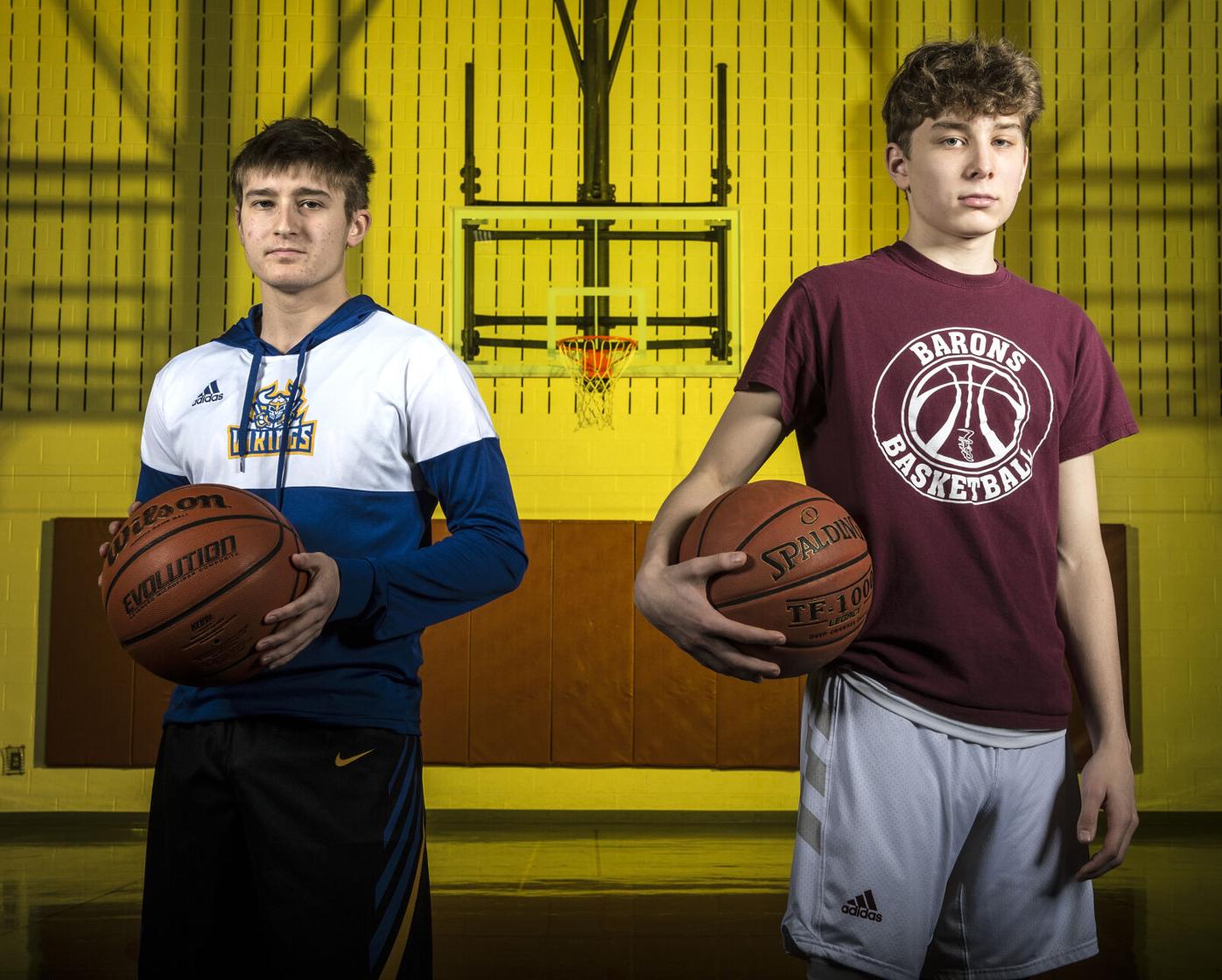 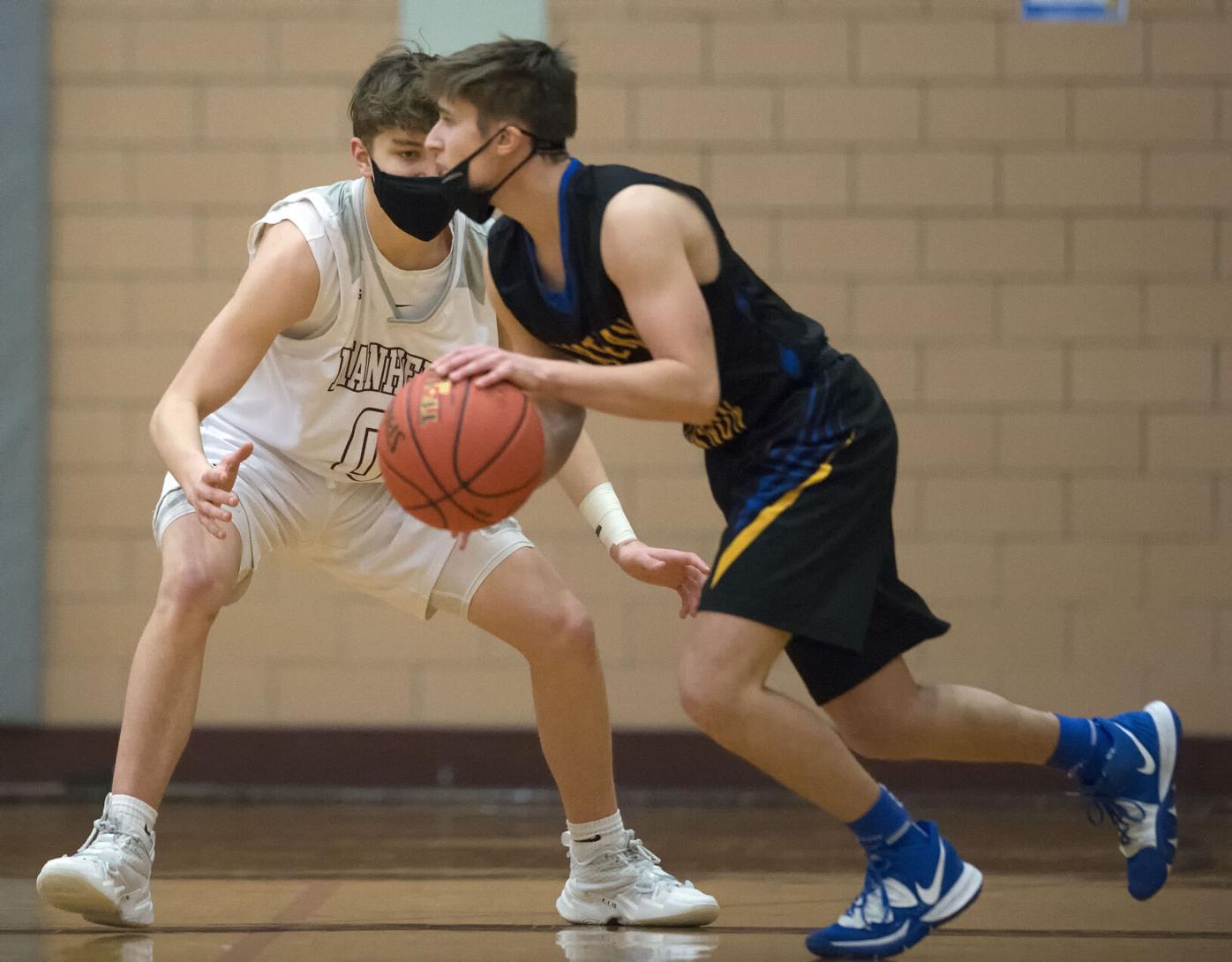 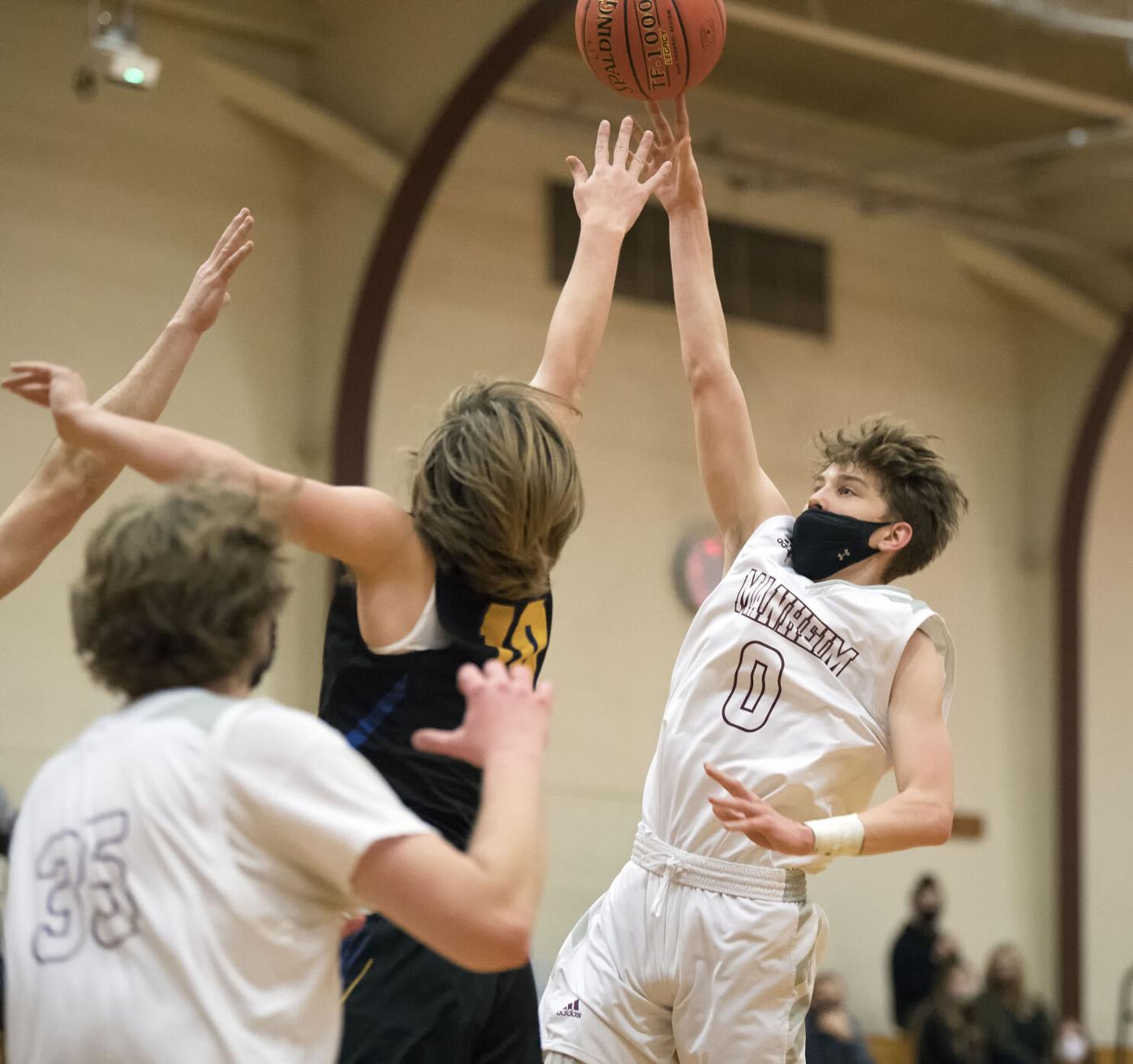 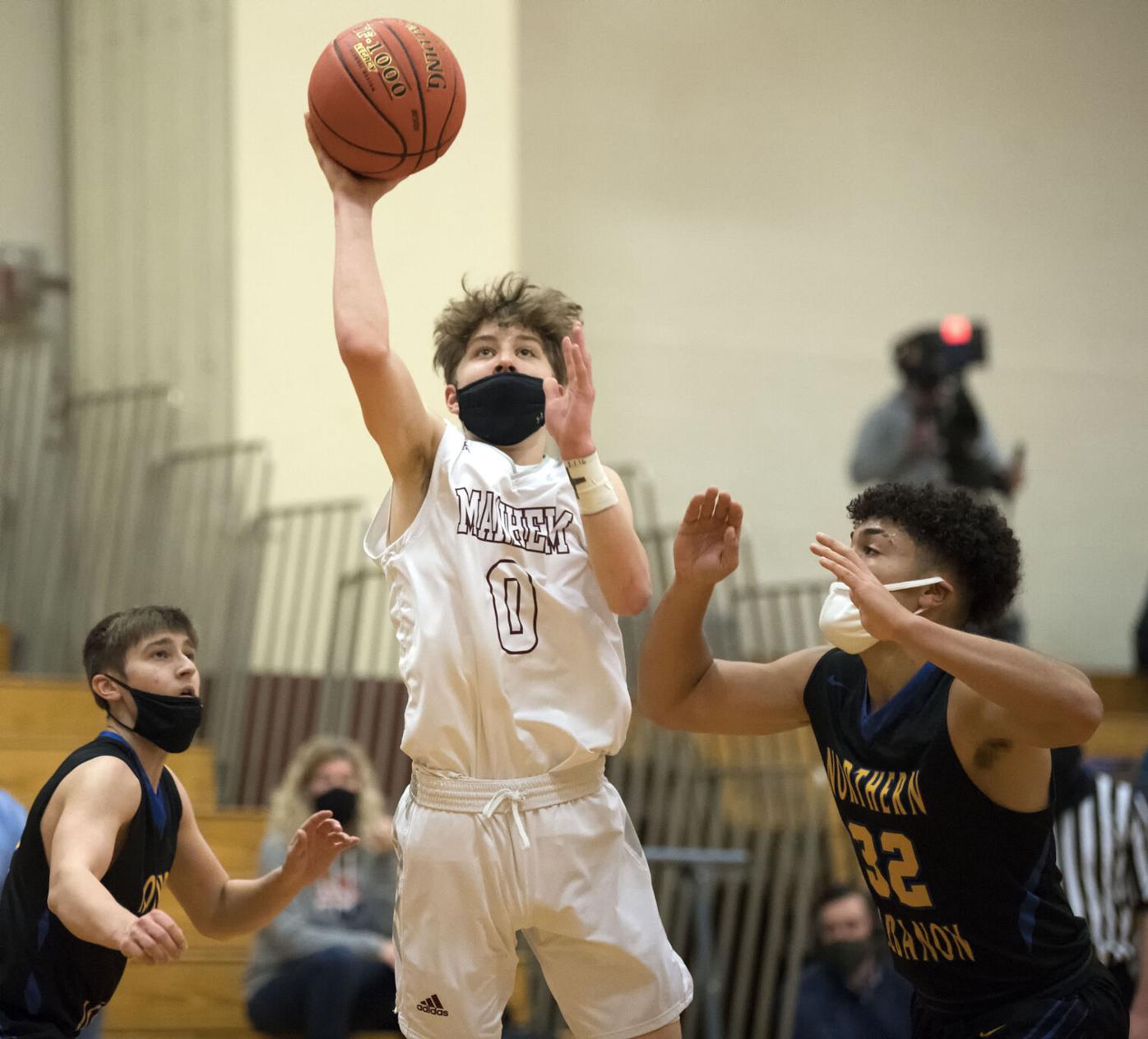 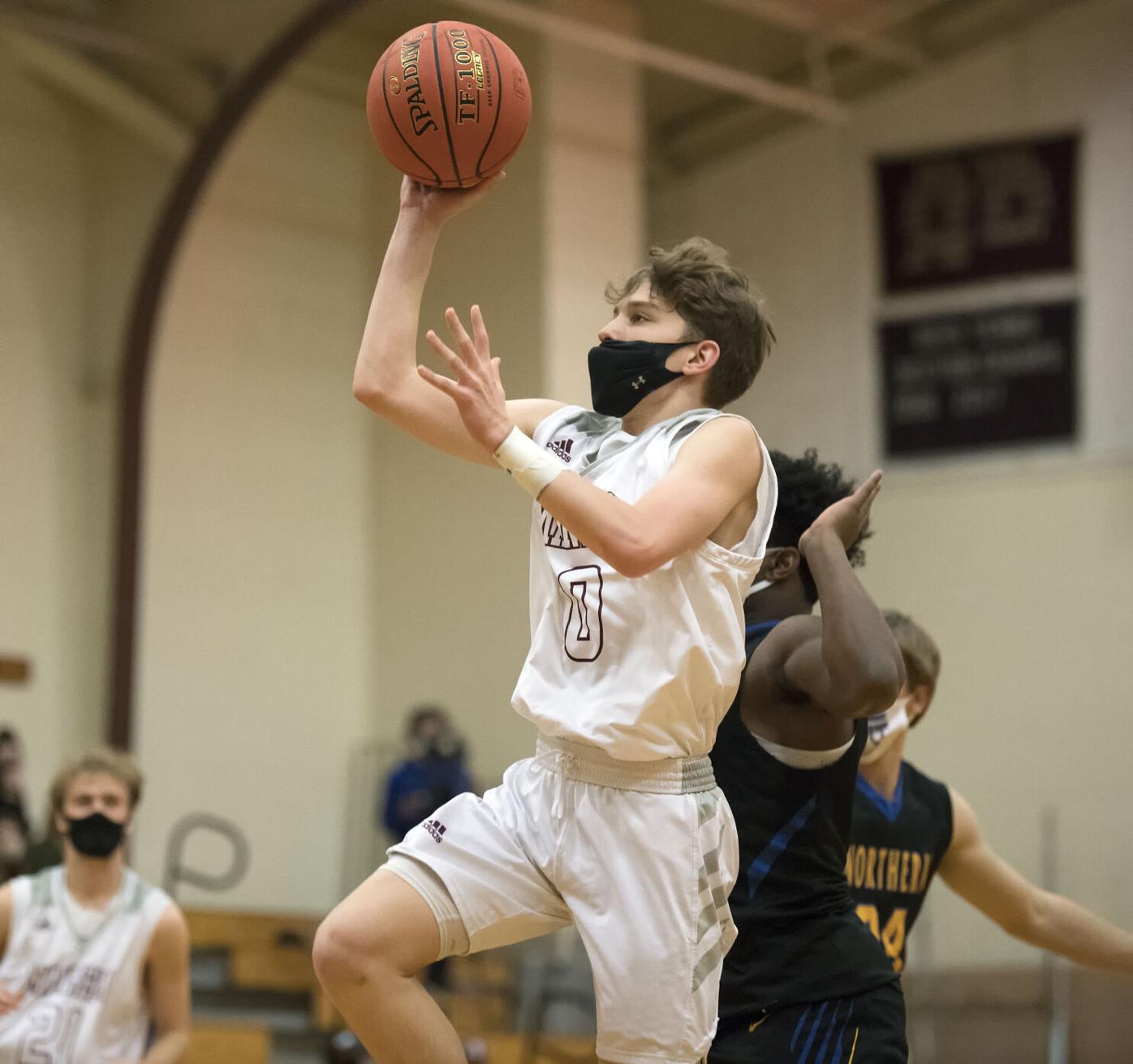 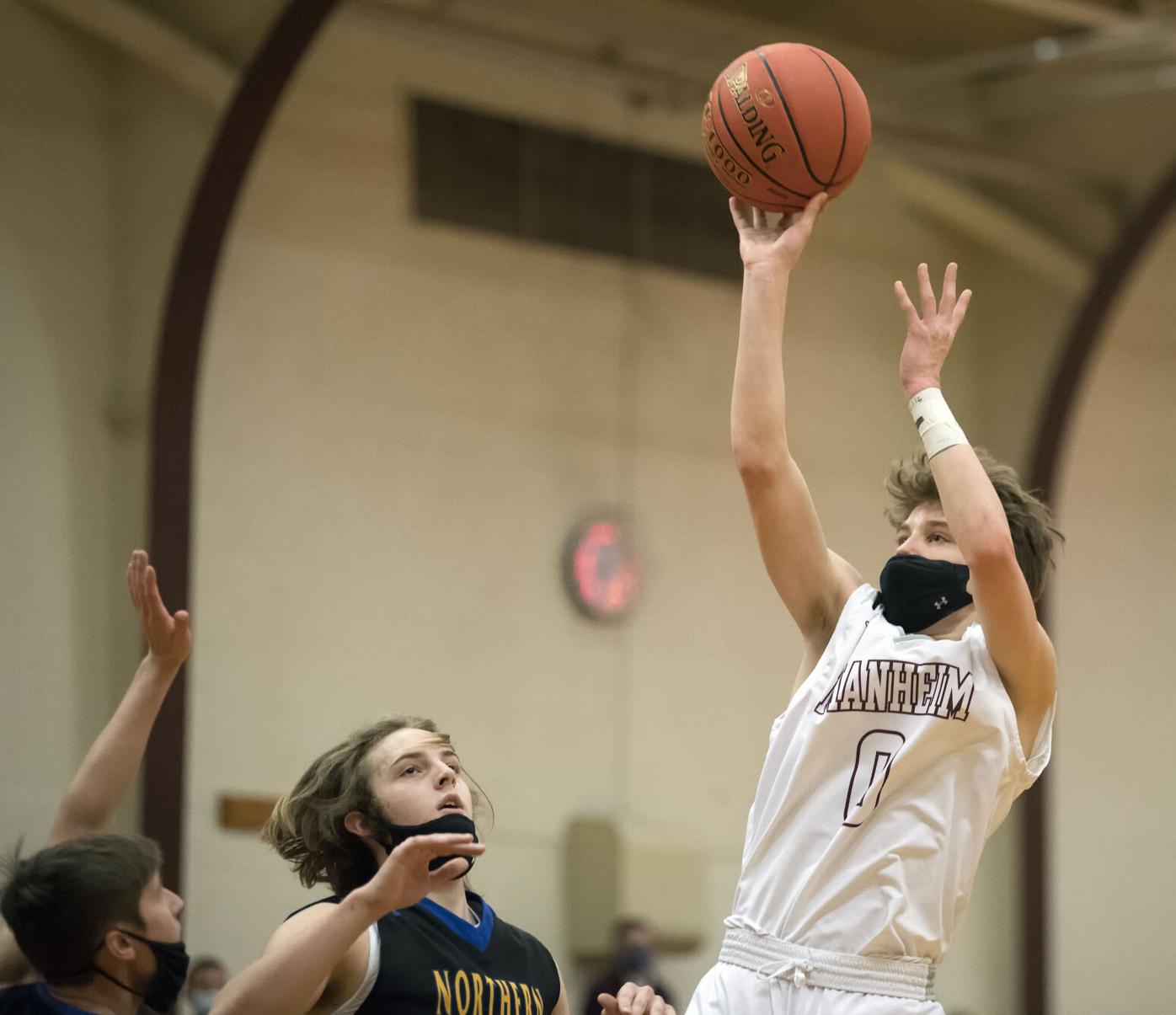 Manheim Central's Trey Grube (0) floats one in for a score against Northern Lebanon during first half action of an L-L non-league boys basketball game at Manheim Central High School Wednesday Feb. 10, 2021. 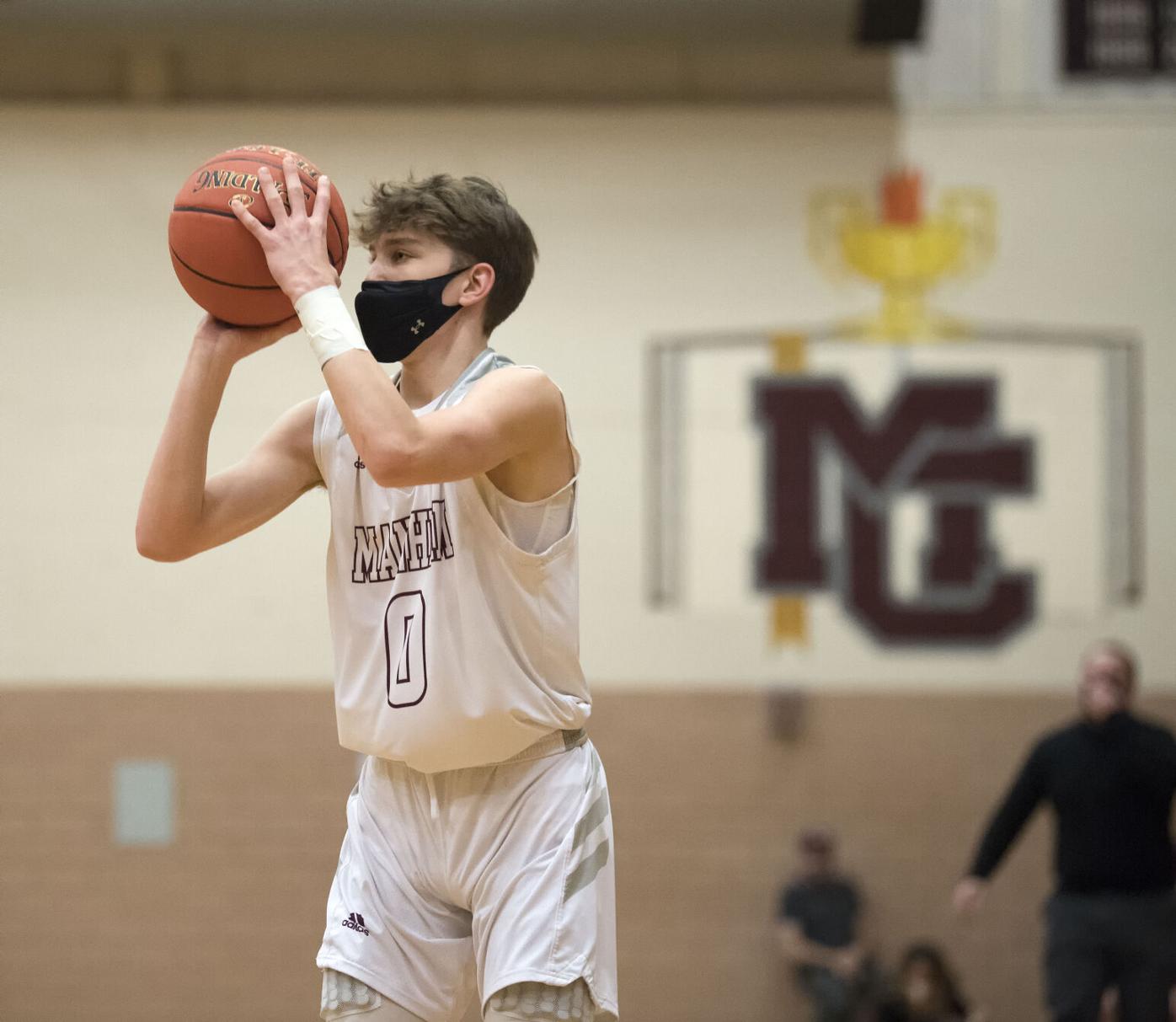 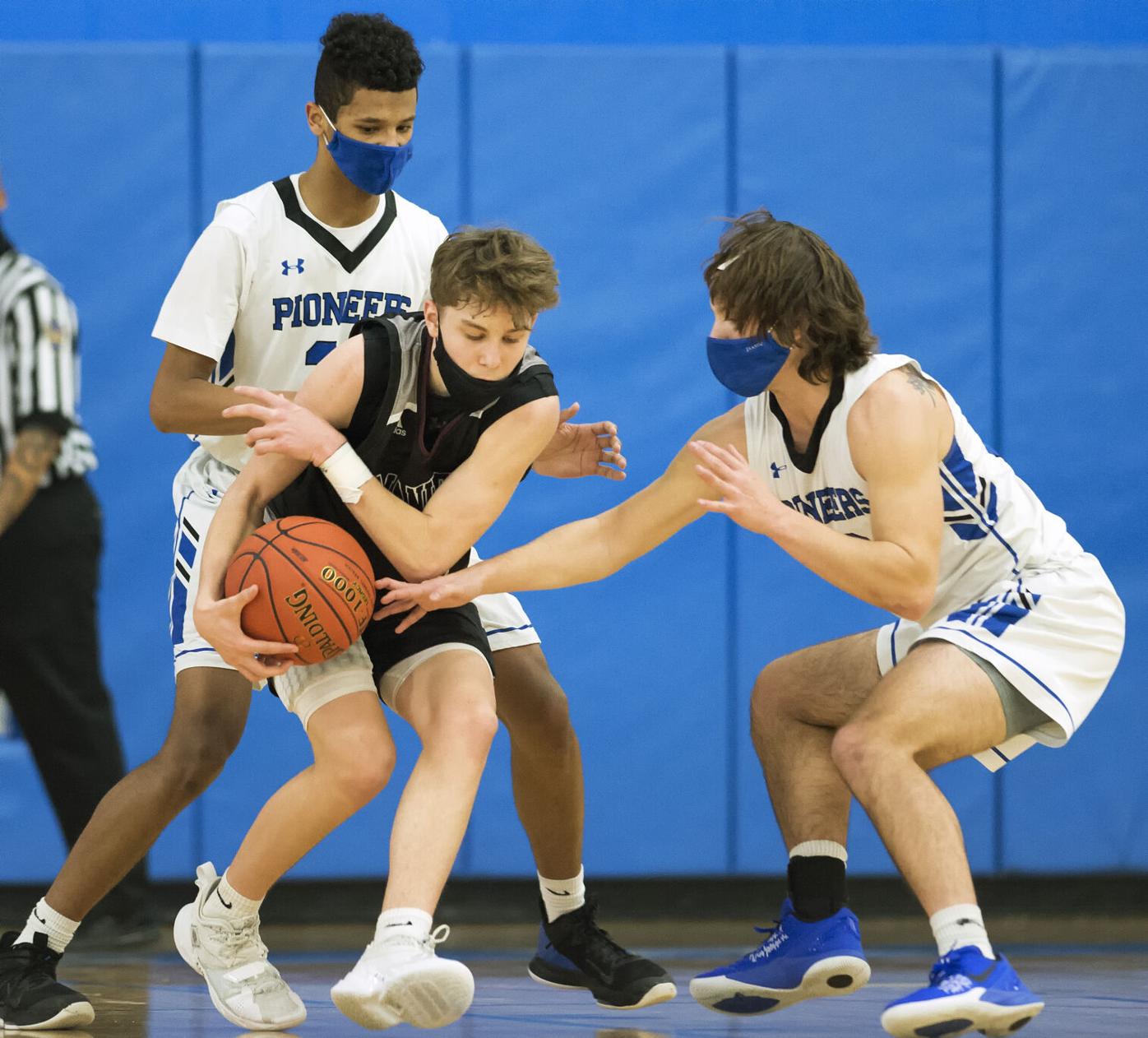 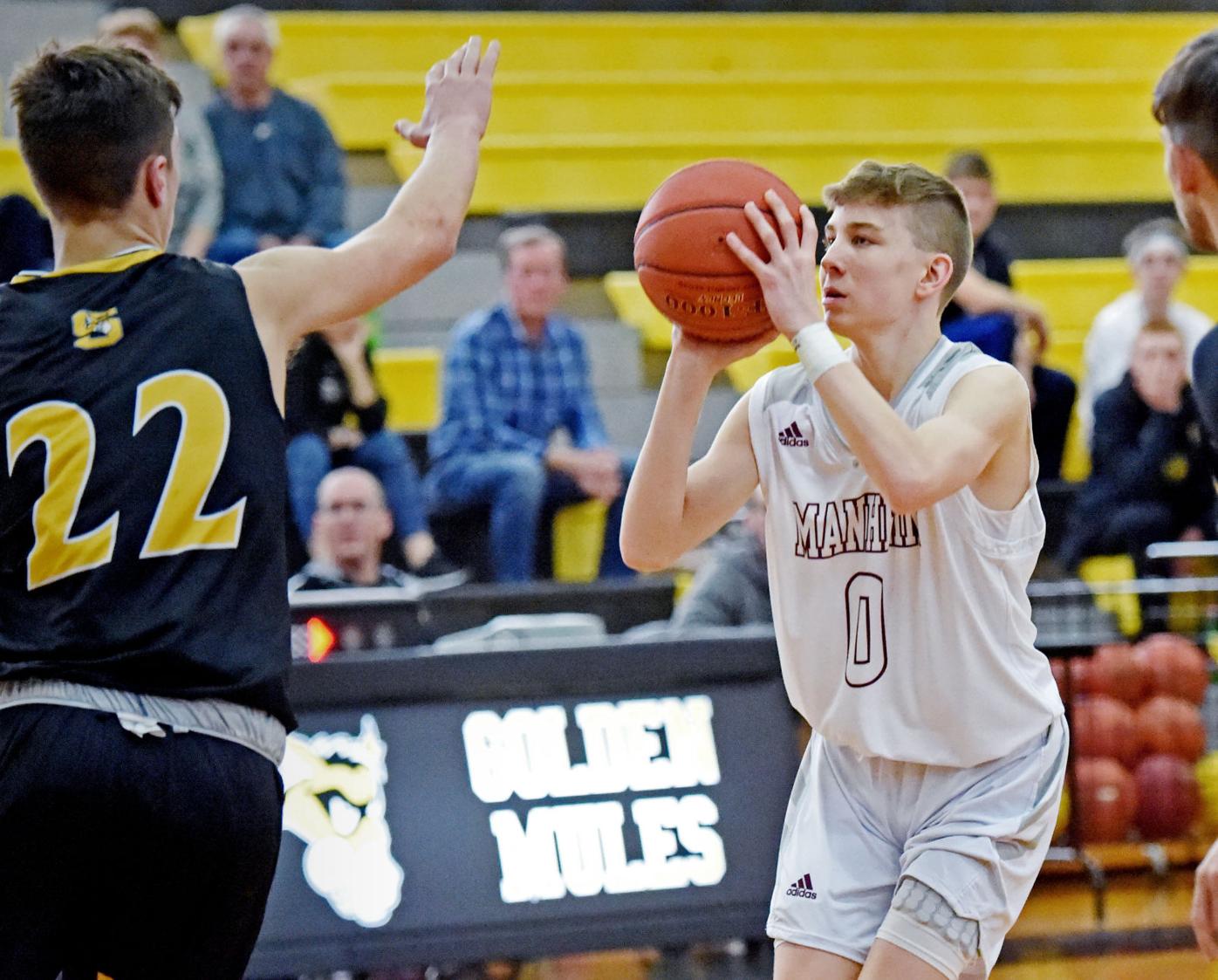 It’s approaching the sixth anniversary of one of the most astonishing shots in the basketball career of Golden State Warriors guard Steph Curry. In a March 2015 home game against the Los Angeles Clippers, Curry slipped around a screen while dribbling through two defenders, was met by another double-team, dribbled behind his back to his right, took two more dribbles backwards and launched a fadeaway 3-pointer from the top of the arc. The shot swished through the net.

By a wide margin.

“There are times where Peyton, in big moments, will take three dribbles past half-court and just fire,” George said. “As a coach, your mouth is agape and the opposing coach is looking at me like, ‘Are you serious?’ ... Sometimes as a coach, like Steve Kerr with Curry, you just have a great player there.”

'A lot of teams have shooters now'

The prolific shooting from deep by Curry and much of rest of the NBA over the last half-dozen seasons or so has trickled down to the youth ranks. High school coaches, many of whom grew up on the inside-out approach, have had to adjust.

“A lot of teams have shooters now,” George said. “I’m sure Fish is in the same boat. He’s got a couple kids who can shoot. He runs all sorts of stuff to try to get Trey looks. That’s what you have to do. ... If I had a true big (tall forward who plays in the interior), in the old days you’d dump it in, everybody is in, you start moving, you kick back out. It’s a little tougher to do that today.”

As for Wolfe and Grube, their perimeter shooting has also come because of their size, or lack thereof. Grube is 5-feet, 10-inches tall and weighs 145 pounds. Wolfe is even smaller.

In other words, they don’t yet have the size and strength to pound with the trees down low. So they’ve stuck on the outside and perfected their shooting strokes.

“You hit the nail on the head there,” Wolfe said.

Wolfe has done so at the guidance of parents Amanda and Neil Wolfe, both Lebanon High School alums. Amanda, maiden name Hayes, was a Cedars basketball player who went on to play at Juniata College. Neil Wolfe is in the National Guard. In short, their son has gotten his shooting stroke from his mom, and work ethic and discipline from his dad.

“Over the summers they rebound for me a lot,” Peyton Wolfe said. “My mom tells me if I have a bad game. She’s usually pretty honest with me about that.”

Grube has done so at the guidance of his dad, Derek, and older brother, Jayce. Derek Grube is an Elizabethtown alum and former Bears football and basketball player.

“I credit all of my game to my dad,” Trey Grube said. “I don’t think he’s ever missed one of my games. In the offseason, we got to Spooky Nook and he trains me. He pushes me to be the best I can be.”

The brothers played together last season, when Jayce was a Barons senior. Jayce is the one who has taught Trey how to stay even-keeled throughout a game, even in the clutch moments when his team needs a big shot. For instance, last season as a freshman, Trey Grube came off the bench in the first four games of the year. In that fourth game against Warwick, he played so well in the first half that he started the second half, then hit the game-winning free throw in the final seconds in a one-point win. He has started ever since. Later, in the final game of the season, he hit the game-winning 3-pointer at the buzzer to top Cocalico.

Wolfe, who has been a starter since the beginning of his freshman year, and Grube are two of just eight L-L players to score 30 or more points in a game this season, and two of just four to have scored 33 in a game. Grube’s 33-point game was aided by nine 3-pointers. Wolfe’s came on five 3-pointers and 16 of 18 shooting at the free-throw line. Wolfe’s 53 made free throws are the second-most in the league, evidence that, while he admits his interior game is still developing, he does know how to draw the foul when he attacks the rim.

Both players are shooting better than 80% from the charity stripe, evidence of proper shooting form.

What are the secrets behind proper form?

“I usually have my right foot slightly in front of my left,” Grube said. “Then for me it’s mostly about rotation. I have my non-shooting hand on the side (of the ball). Then my dominant hand on the front laces. And then bring the ball above the head and follow through. The goal is to get the rotation so the ball has a backspin as it leaves your hand.”

Grube said he also looks at the back iron of the rim when shooting. Wolfe's approach is more simple.

Northern Lebanon played at Manheim Central on Wednesday night. It was a lopsided victory for the Barons. Wolfe and Grube combined for four 3-pointers, with Wolfe hitting the first 3-ball of the game. Grube hit the last. It wasn’t quite the sharpshooting extravaganza that might have been expected. But neither are going to stop shooting any time soon, which is another key piece in explaining the art of a good shooter.

“I have always have the confidence,” Grube said. “That the next shot is going in.”

Name your sport, and Elco's Braden Bohannon has probably excelled at it

Braden Bohannon’s favorite time of year is the summer.

In 2013, Techeal Gonquoi had just finished third grade and expressed a desire to play sports…

Editor's Note: The assertion that “recent studies have indicated that mouthwash is effective…

Overcoming pressure to follow in father's footsteps, Columbia's Michael Poole carving his own path on hardwood

Because dunks are uncommon at the high school boys basketball level, fans usually are sent i…

The best boys' basketball team in the state is ... TBD [column]

In what has become an annual tradition in This Space, today we answer the question, “Who’s the best (high school boys) basketball team in the …

With one week left before the Lancaster-Lebanon League tournament begins, three of this year’s five league playoff spots are taken.

In late January, we took a look at the large and impressive group of freshmen boys’ basketball players having varsity impact in Lancaster Coun…

We entered last week with 11 Lancaster-Lebanon League boys basketball teams, and five Class 1A teams from Lancaster County, set to compete in …