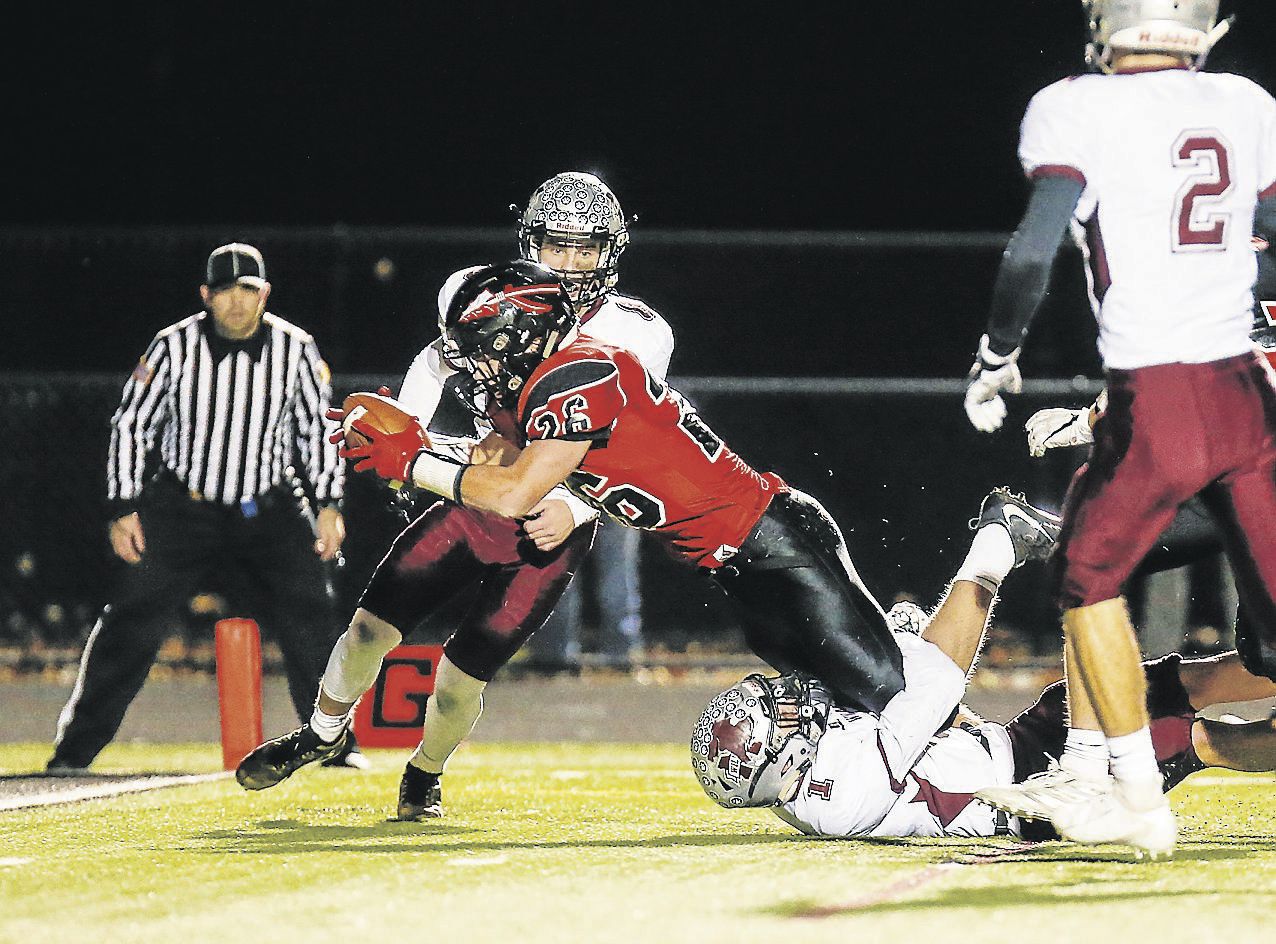 Warwick's Colton Miller is tackles by Mechanicsburg's Taylor Shearer as he reaches for the goal line during Friday's District Three Class 5A playoff game in Lititz. 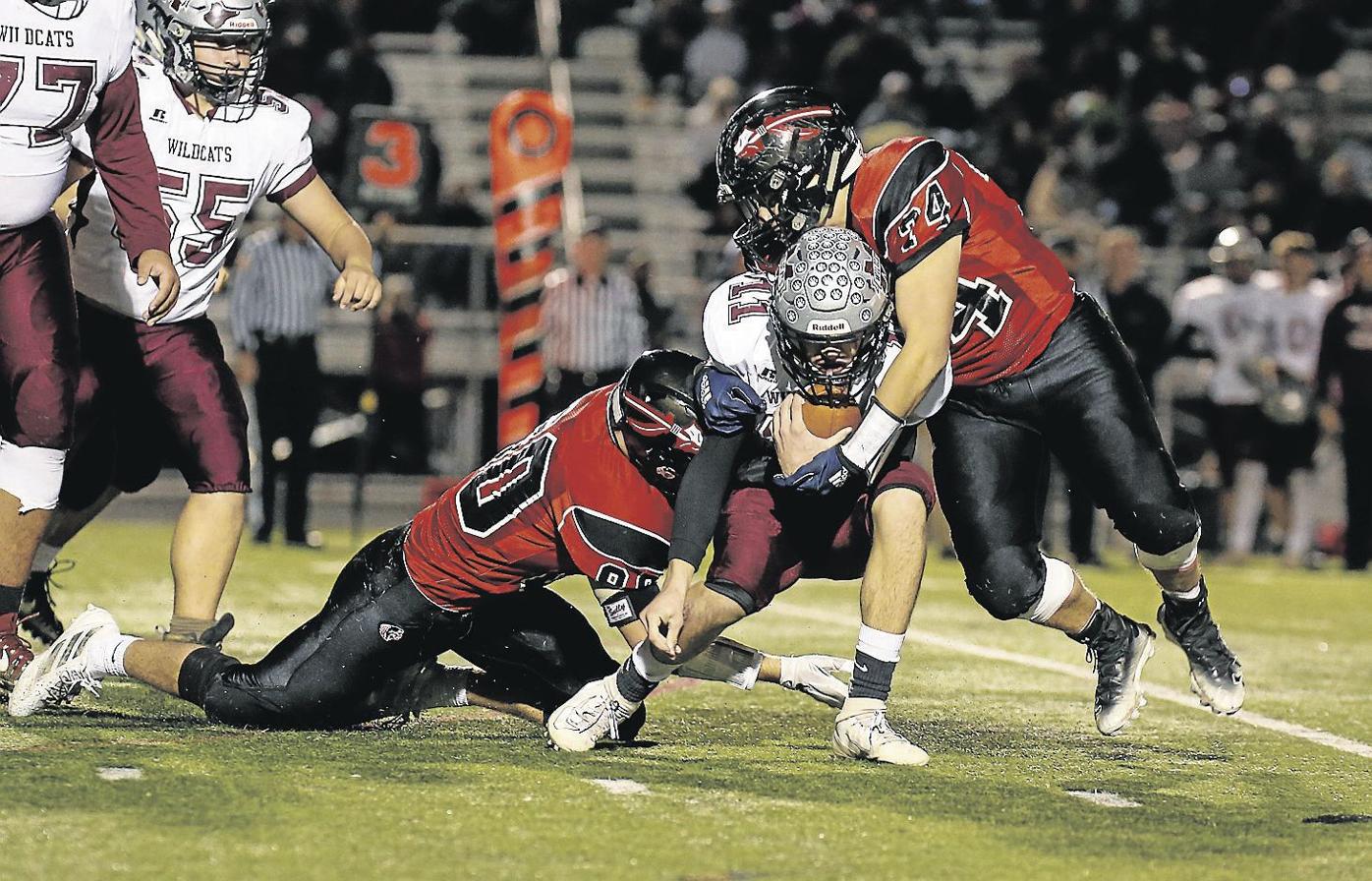 Warwick's Colton Miller is tackles by Mechanicsburg's Taylor Shearer as he reaches for the goal line during Friday's District Three Class 5A playoff game in Lititz.

Colton Miller set the early tone for Warwick by rushing for a combined 27 yards on his first two carries Friday night.

By game's end, the junior running back ran for a game-high 157 yards and three touchdowns on 24 attempts, as the fifth-seeded Warriors defeated No. 12 Mechanicsburg 34-6 in a District Three Class 5A first-round playoff game at Grosh Field in Lititz.

The win sends Warwick (9-2) to next Friday's playoff quarterfinals to face fourth-seeded Manheim Central (9-2), a 48-0 winner over No. 13 Waynesboro.

In the Warriors' win over the Wildcats (6-5), senior David Hnasko added 82 rushing yards and a 43-yard TD run, helping Warwick gain 279 yards on the ground.

"Early on, we ran a couple of formations, looked at some stuff, and we thought we'd be able to run the ball, so we did and we were really good at it," Warriors' coach Bob Locker said.

Although the Warriors went on to collect 430 total yards against Mechanicsburg, they also turned the ball over four times — on two fumbles and two interceptions. Plus, the two teams combined for 234 penalty yards.

"On the first two drives in the first quarter, we did what we knew we could do, and then all of a sudden, we got sloppy." Locker said. "At this point in the year, you can't do things like turn the ball over. It is very uncharacteristic."

The Warriors came out moving the ball well after receiving the opening kickoff. Warwick QB Joey McCracken (13 for 21, 151 yards) connected with Caleb Schmitz (5-63 yards receiving, TD) on a slant pattern to set up Miller's 1-yard TD run with 3:53 elapsed. Tanner Haines added the PAT to make it 7-0.

For the season, Miller now has 1,091 rushing yards and 27 touchdowns.

After managing only nine first-half rushing yards and 48 total yards in the first half, Mechanicsburg came out following the break and put together a 77-yard scoring drive, capped with a 4-yard TD pass from James Anderson (11 of 20, 82 yards, INT) to Nicholas Morrison on fourth-and-short.

The Wildcats, who finished with 203 total yards of offense, were then threatening to make it interesting after Caleb Brubaker recovered a Warrior fumble at the Wildcats' 40.

But Warwick's defense forced a three-and-out, and then Miller's 3-yard TD run with 30 seconds left in the third stretched the lead to 27-6.

Just over four minutes later, McCracken's 29-yard TD pass to Schmitz gave Warwick a 34-6 advantage and put the game out of reach.

"Mechanicsburg played hard," Locker said. "They were scrappy, they didn't quit and they did some things well, so hats off to them."