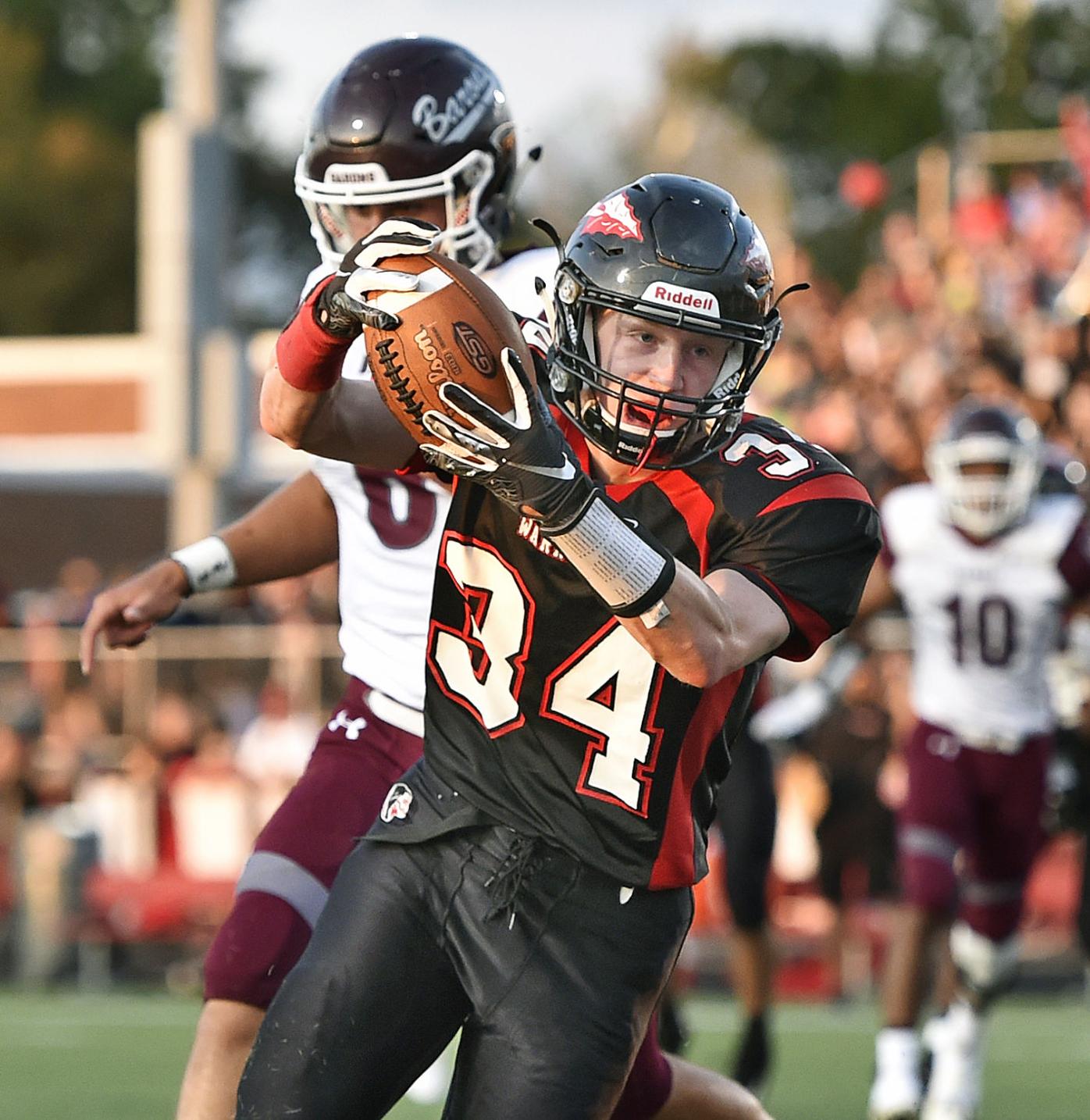 Warwick's Caleb Schmitz (34) goes in for a touchdown after a catch against Manheim Central during first half action on Grosh Field at Warwick High School Friday September 6, 2019. 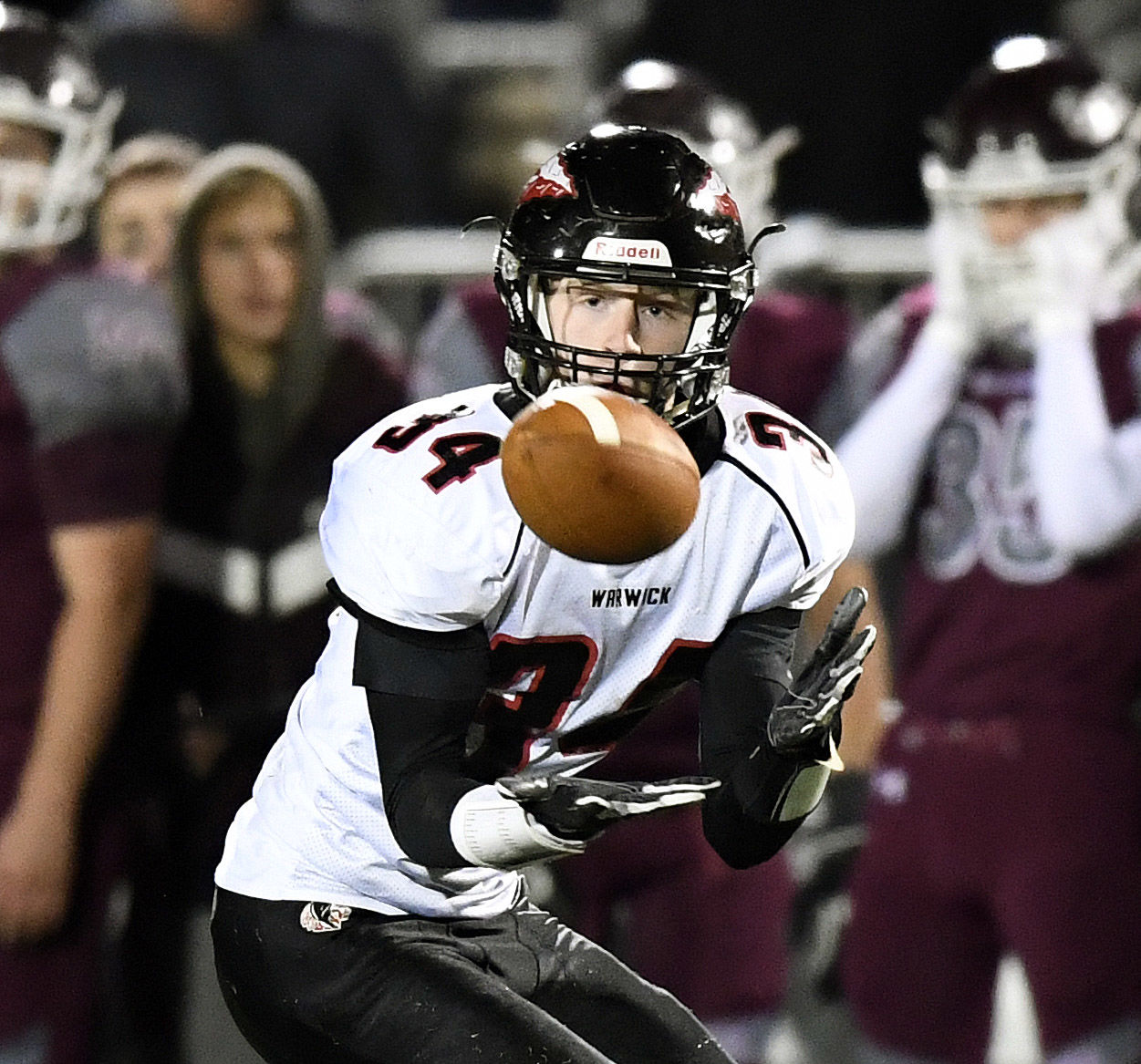 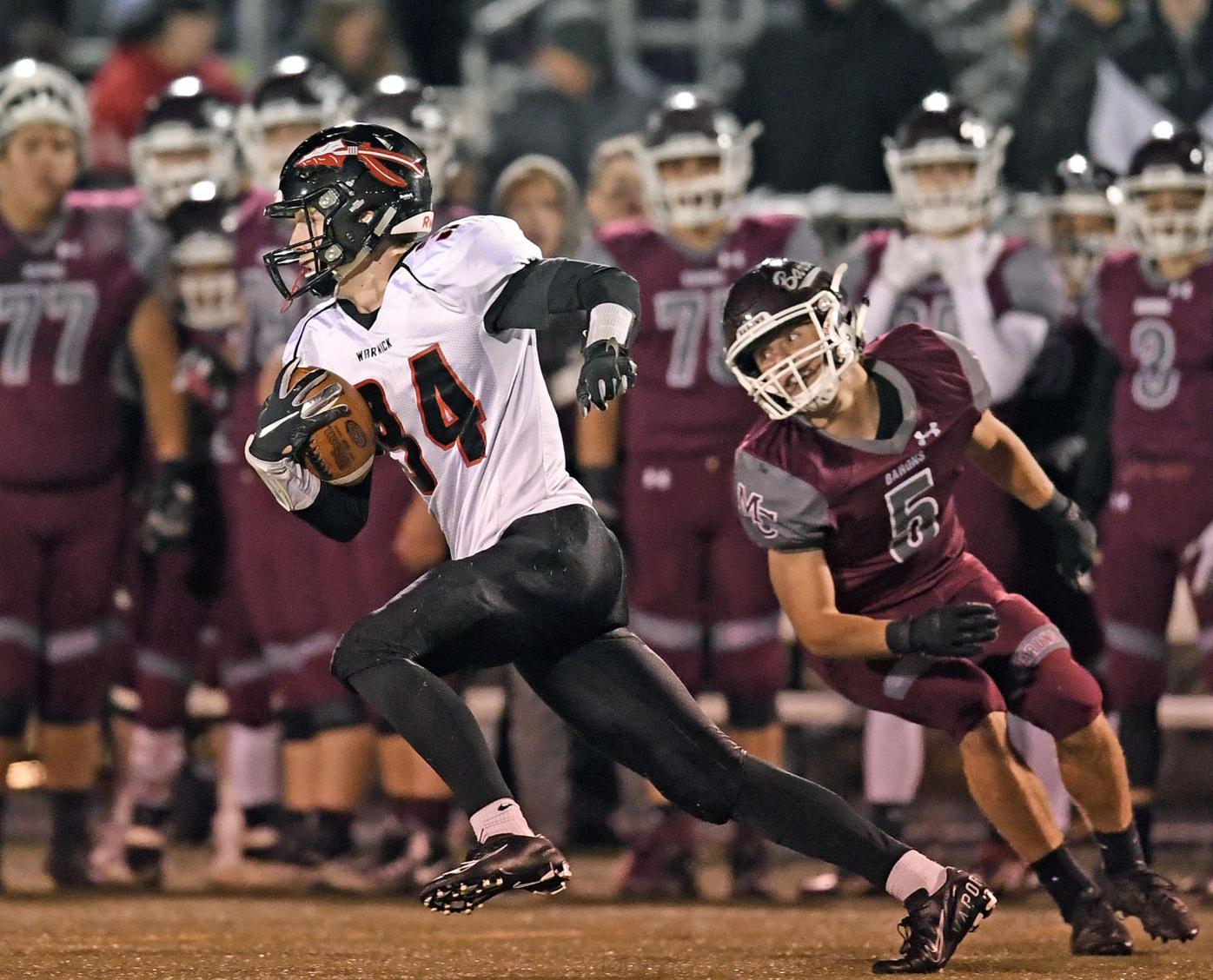 Warwick's Caleb Schmitz (34) goes in for a touchdown after a catch against Manheim Central during first half action on Grosh Field at Warwick High School Friday September 6, 2019.

An Ohio native, Warwick rising senior Caleb Schmitz grew up an Ohio State football fan. Although his family moved to Pennsylvania when Schmitz was in the first grade, he has spent nearly every football Saturday since then watching the Buckeyes and longtime assistant coach Luke Fickell, who has now spent the last three years as the head man at the University of Cincinnati.

“I’ve been keeping an eye on Cincinnati,” Schmitz said by phone Friday evening. “I watched Coach Fickell growing up.”

Cincinnati offered Schmitz, a 6-foot-4-inch, 200-pound wide receiver/safety, a full athletic football scholarship May 11. Eleven days later, on Friday, Schmitz verbally committed to the Bearcats. Cincinnati is coming off an 11-3 season in which it finished ranked No. 21 in every major college football poll.

“They are just winners,” Schmitz said.

Schmitz’s commitment closes a whirlwind four-month recruiting period since he picked up his first athletic scholarship offer from Western Michigan on Jan. 29.

Schmitz made unofficial visits to Penn State, Syracuse, Bowling Green, Michigan and Western Michigan, but had to postpone a trip to Cincinnati.

“Thankfully, for me I’ve been around the (Cincinnati) campus, being from Ohio,” Schmitz said. “I’m down in Ohio probably at least every summer visiting family.”

Football apparently runs in the genes of the Schmitz family. One of Schmitz’s uncles, John Jackin, played in two Rose Bowls for Michigan. Another uncle, Eric Schmitz, has been a longtime coach at the high school and college levels.

“My dad was a great football player in high school (in Ohio) but got in a motorcycle accident,” Schmitz said. “He played rugby at Bowling Green.”

Schmitz’s father, Jason, commutes to his day job as a CEO of a building manufacturing company in Ohio, which has influenced his son.

A two-year defensive starter, Schmitz made 49 total tackles, 10 tackles for loss and four interceptions from his safety spot last season. He also hauled in 56 receptions for 957 yards and 13 touchdowns as a receiver. The output led to Schmitz earning Pennsylvania Football Writers’ Class 5A all-state honors and picking up all-star nods from EasternPaFootball and Pennsylvania Football News.

In normal circumstances, Schmitz’s commitment may have come at a later date considering the big offers he has already received sometimes show up for rising high school seniors in the summer after their junior year, when they dazzle in summer recruiting camps or showcases. The COVID-19 pandemic has pushed those events back to July at the earliest.

Schmitz didn’t want to wait that long. He instead remained active in reaching out to coaches and sending them both game film and film of his personal workouts, the majority of which he’s done at Weaver Fields in Manheim Township.

“That’s just the situation we’re all in with this coronavirus stuff,” Schmitz said. “(Cincinnati) felt right. Once you get a feeling about someplace you jump on it.”

When Lancaster-Lebanon League football resumes later this fall — fingers and toes crossed — there will be multiple specialists to keep an eye on.

MaxPreps, which has been tracking high school football statistics, rankings and accomplishments across the country online since 2002, has unve…

There will be plenty of top returning talent on the defensive side of the ball this fall, when the 2020 Lancaster-Lebanon League football seas…

Previewing the L-L League Section 2 teams, which are listed alphabetically ...

A milestone victory. A triumphant comeback. And a clean 2-0 getaway for Warwick.

With the first winter snow of the season in the forecast, and with winter sports on pause because of coronavirus protocols, here are a few L-L…

A pair of Warwick senior standouts took advantage of the early NCAA signing period for Class of 2021 graduates on Wednesday.

Four Lancaster-Lebanon League senior football standouts have been selected to represent Pennsylvania and play in the prestigious Big 33 game.