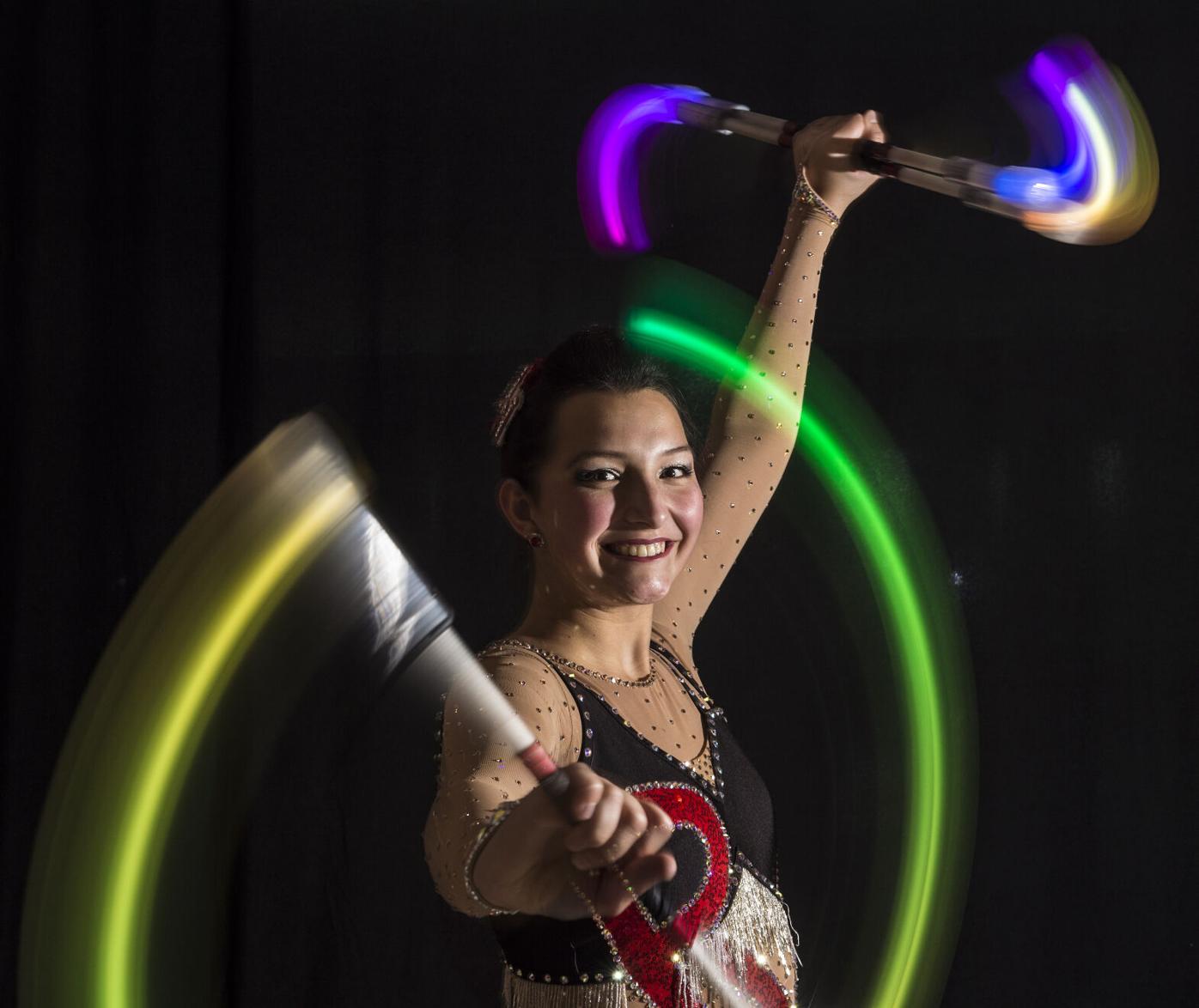 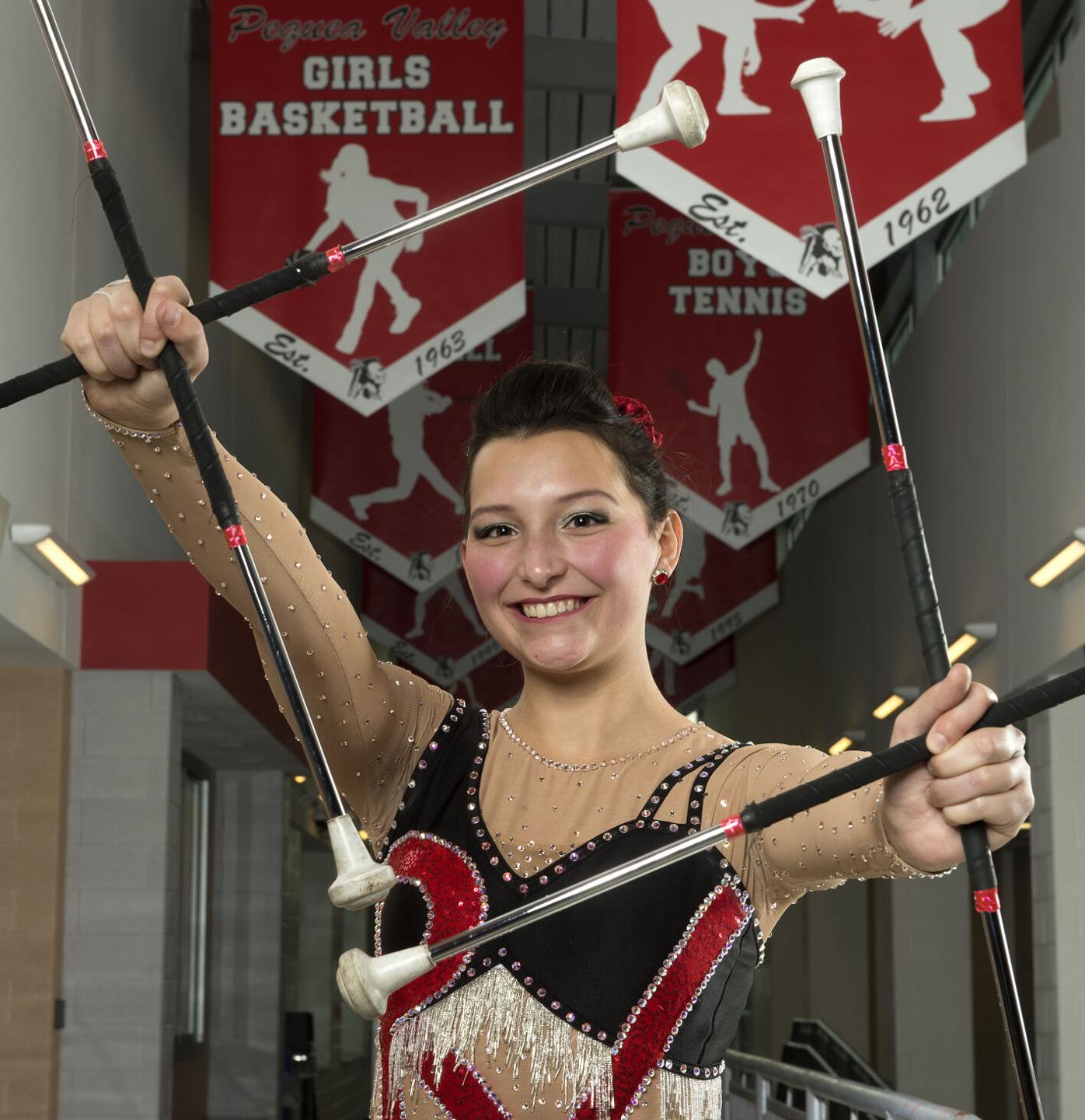 Sometimes at her performances, Emilie Thibeault sparks inspiration in youngsters.

When she reached the eighth grade, she approached Jim Ackerman, who was then the Pequea Valley High School marching band director. Thibeault wanted to know if she could twirl baton for the marching band.

The thing is, only a handful of Lancaster-Lebanon League schools have a baton twirler attached to their marching bands. And before Thibeault’s arrival, a couple decades had passed since Pequea Valley last featured a twirler in its marching band. More on that in a bit. But just know Ackerman took a chance on Thibeault. And it's paid off.

Thibeault, now a Pequea Valley senior, has become one of the best twirlers in the country.

She’s racked up several medals at various regional, state, national and international tournaments in the last couple years. She hopes to be a feature twirler in college, having applied to Delaware, East Carolina, Furman, South Carolina, Syracuse, Lebanon Valley and California University of Pennsylvania. She's in the process of applying to Harvard and North Carolina as well.

"If I hadn't had this opportunity at my high school, it would be a lot harder for me to go and twirl at college," Thibeault said. "Twirling in a gym for competitions is completely different from twirling out on the field for a marching band."

Among her course load this fall, Thibeault has a speech class, in which she is preparing a presentation focused on convincing her peers that baton twirling is a sport. A part of that presentation will include a saying drilled into her over the years by her coach, Ab-Salute Twirling director and Conestoga Valley alum Wendy Rhoades.

"It takes the precision of a quarterback, the strength of a gymnast, the poise of a ballerina and the stamina of a track runner," Rhoades said. "All underneath a stick."

Being a successful baton twirler also requires daily practice on a year-round basis, akin to a gymnast.

"We're trying to do various elements," Rhoades said. "Spinning, dancing, jumping, twirling. ... Underneath, how high do we have to send a baton to do all these things while the baton is in the air? And then catch the baton underneath or between the legs."

It's why Thibeault, in an effort to stay limber, stretches every day. And practices throwing multiple batons each day, whether that be in the driveway or backyard of the family's Paradise Township home, or on an open grassy area at a nearby park. She also spends some evenings at Prestige Gymnastics in East Hempfield Township.

Twirling competitions take place at least once a month, leading to various fundraisers, such as sub sales, to help offset costs. After all, competitions quickly become expensive when you factor in participation fees, travel, lodging and meals — in addition to buying custom-made costumes and replacing broken batons.

But some of Thibeault's more recent accolades have been more than worth the effort: she’s the 2019 two-baton state champion, 2019 North Atlantic Regional champion in two- and three-baton twirling, and  the 2019 Twirling Unlimited International champion in two-baton twirling. She also won four gold medals, one silver and two bronze at the 2019 Amateur Athletic Union Junior Olympics.

Like other twirlers, Thibeault's many 2020 competitions were wiped out by the COVID-19 pandemic, something that may have impacted her college recruitment.

The coronavirus also kept the Pequea Valley marching band to only performing at home games this past fall. As a result, Thibeault didn't have the chance to use her fire batons, which she admits have caused minor burns to her forearms over the years.

"I have a fire routine, but we can't do it at Pequea Valley because we have a turf field," Thibeault said.

Still, her career has become more than Thibeault could have thought possible when she first asked Ackerman about twirling for the band.

Ackerman is no longer the Pequea Valley marching band director. But when he took over the program in 2008, he said it had 18 students.

Part of that is because Pequea Valley is a small school, with graduating classes averaging around 100 students. And the band must compete for participants against the many fall sports offered today, although PV students are encouraged to participate in multiple extracurricular activities.

It's why, in an effort to drive up the number of students in the marching band, Ackerman pulled the program out of performing in competitions.

"Competition bands require a lot," Ackerman said. "There's a week of band camp and summer practices at night. Then when school started you had to practice three nights a week. Our students are involved in other sports and other activities because the school doesn't have enough students. I think what happened was kids were just burning out."

Plus, competition bands are under pressure to perform well, which may explain why some band directors might be hesitant to utilize a baton twirler. After all, a dropped baton during a marching band performance might lead to docked points in competitions.

"Whatever is right for each school is great," Ackerman said. "But this is our school and I wanted to find a new path. If I have kids who can do something, I find a way to help them find a place with what they have."

This explains why Thibeault also plays the quad-drums with the marching band in the bleachers during the first and second halves of football games, then performs with the batons on the field during halftime.

It's also worth noting here Thibeault plays the drums in the school's concert band, and serves as a student council treasurer, class treasurer and a National Honor Society vice president. Additionally, she works a part-time job as a lifeguard at the Lancaster Family YMCA. All while maintaining a 4.3 grade-point average in the classroom.

"If I hadn't pushed myself," Thibeault said. "I don't think I'd be successful as I am now."

Sometimes, after Thibeault's performances, little girls will run up to her, inspired to pursue baton twirling after what they just witnessed. What advice does Thibeault have for them?

"Try your best. Don't let anything get you down," she said. "If you're struggling with something, just continue to work at it. Take advice from coaches and parents. Ask people questions. Push yourself, but not to the point you want to quit. Make sure you want to do this and commit to it. If you want to be good at something, then you have to put in the effort."

And, perhaps, find the right person to give you a shot to twirl baton for the high school marching band, as Thibeault did with Ackerman.

"Maybe through this article," mother Heather Thibeault said. "The right person reads it and it's another marching band director at another school who would be open-minded to giving (baton twirling) a try."

A champion for lacrosse and a motivator to his students, Jim Fiora won't be forgotten [column]

Plans for apartment complex with 104 units in Pequea moves forward

Always on the move, tennis is just one of four sports for Pequea Valley senior standout Josh Jarvis

A trip to the beach likely encompasses thoughts of relaxation. Like sitting

Under normal circumstances, without a pandemic going on, the recruiting process Emilie Thibeault experienced over the last six months likely w…