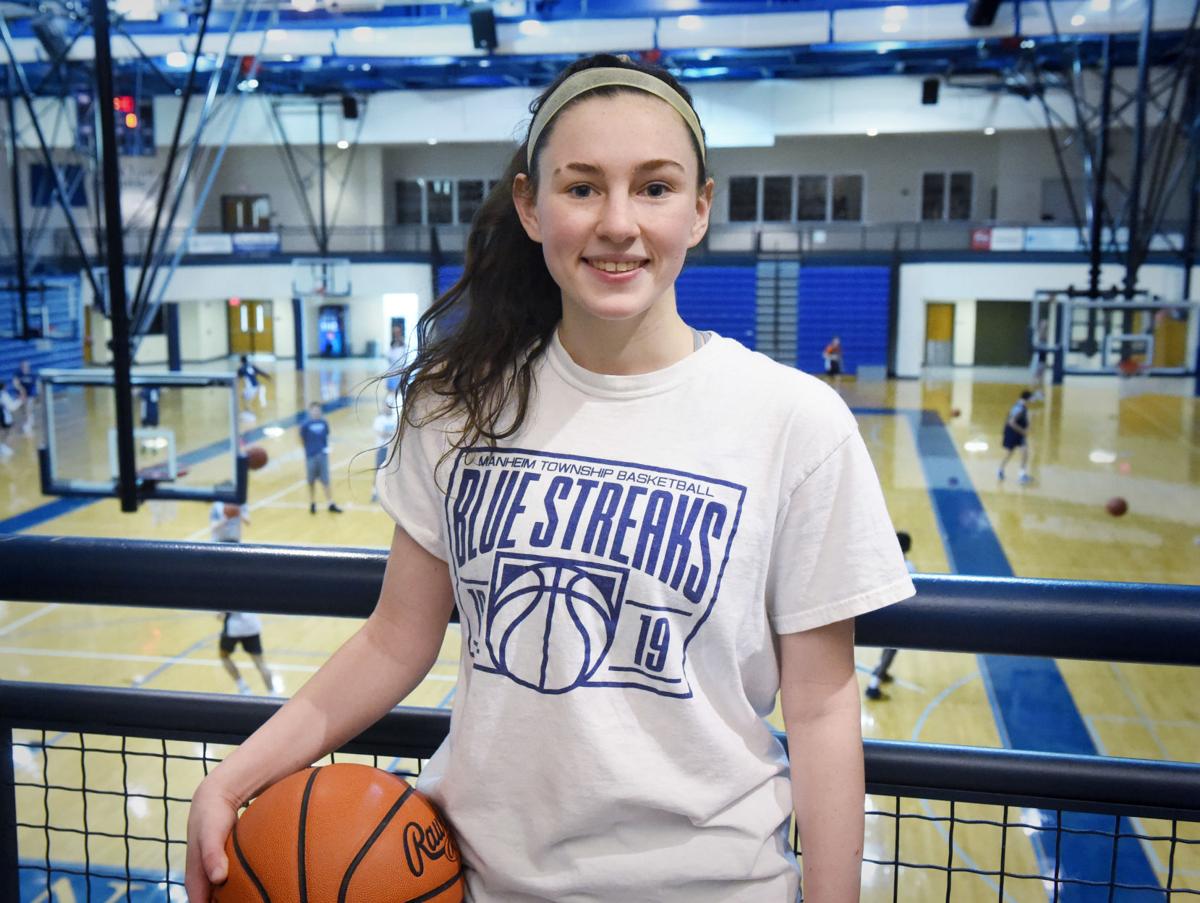 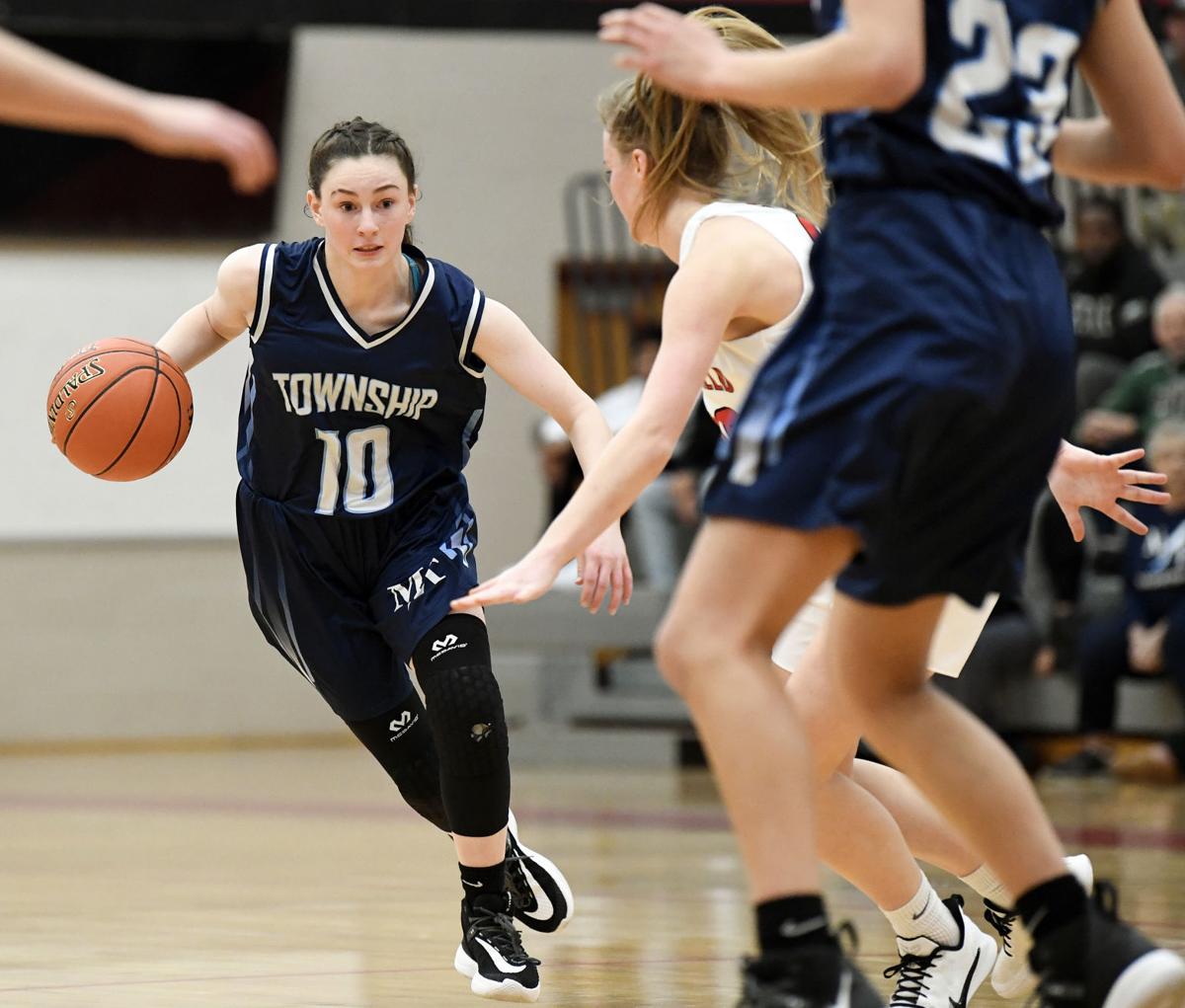 Manheim Twp.'s Ali Quinn (10) controls the ball at the top of the key against Hempfield during first half action of an L-L section 1 girls basketball game at Hempfield High School Friday Jan.10, 2020.

Manheim Twp.'s Ali Quinn (10) controls the ball at the top of the key against Hempfield during first half action of an L-L section 1 girls basketball game at Hempfield High School Friday Jan.10, 2020.

Ali Quinn will forever be grateful that she has wonderful memories of the last day she spent with her dad.

“He dropped me off at school that day,” Manheim Township’s senior student-athlete said. “Most of the time when he drove me to school, we’d fight about politics, or we’d listen to Tom Petty, because he loved Tom Petty. But that day was different. He was like, hey, do you want to go to McDonald’s for breakfast? I said sure. That was great.”

Later that day, her dad, Stephen Quinn, died unexpectedly from a heart condition.

“Sometimes teens get so caught up in life that they forget to say I love you,” Quinn said. “But I did that day. And I’m so glad I did.”

Ali and her dad had a special bond. Stephen played basketball for Lancaster Catholic in his prep days, so he paid particular attention to his daughter’s career and how she played the game.

“A group of teachers used to play pick-up games twice a week after school, and I remember him coming in and playing with us a few times,” Township girls basketball coach Sean Burkhart said. “He was a good guy to play with. He was always laughing and having a good time on the floor. He always wanted the best for his kids, and what they were doing.”

That would be sons Ben and Nick and daughter Ali, who has firmly established herself as one of the top defensive players and all-around point guards in the Lancaster-Lebanon League. She’s having an outstanding senior season, just a few years after losing her dad.

Ali and her mom, Kelly, look after her brothers.

“Senior year has been the hardest because there are a lot of lasts,” Quinn said. “And I can’t share those lasts with him. Graduation. Senior Night. Not having him there for Senior Night in soccer was so hard. Senior Night in basketball will be especially hard because my dad was the basketball guy.”

Pep talks. Pointers. Talking shop. Stephen Quinn was a handyman by trade, and he taught his daughter to play sports passionately, and with an edge. So it's not uncommon to see Quinn sprawled out on the court, diving after loose basketballs. Or playing in-your-face defense from end-line to end-line.

That's Ali Quinn, who said she can hear her dad’s voice in her head during games, urging her on.

“He always told me to play defense and pass the ball,” Quinn said. “He’d say pass first, shoot it second. So that’s what I’ve always done and that’s how I’ve always played. It’s my last year, and if he can’t be here, then I want to do the best I can — for him.”

Quinn excels in transition and in the open court, playing gritty defense and forcing steals at one end, and running the break, making pinpoint passes and chipping in with fast-break layups and 3-pointers at the other end.

“She plays tough,” Burkhart said. “We go as she goes. With Ali, it’s not always vocal. But she’s starting to realize that this is it. She wants to be on a team that’s remembered for doing something. You can see it in her demeanor.”

On the basketball court and off. She's excelling in the classroom, too; Quinn was recently accepted at Millersville University, where she’ll study social work in hopes of becoming a therapist for kids under 18. She wants to help kids overcome things like she's had to overcome at such a young age.

“She’s done a tremendous job figuring things out, being a big sister to her brothers and supporting her mom,” Burkhart said. “She’s mature beyond her years.”

Quinn’s last year playing basketball for the Blue Streaks has been her best yet. She's been a terror on defense, and is chipping in more than six points a game, as Township is in line for league and District Three playoff spots.

“When my dad played basketball in high school, he was the smallest guy on the court, and that’s pretty much me,” Quinn said. “He didn’t shoot the ball much; he was always known as the guy who played defense and made the awesome passes and tried to hype his team up. So I’ve always tried to do that: Bring the energy and play the best defense and to have the heart. That’s what my dad taught me.”

Stephen Quinn would be very proud.

From Nigeria to Linden Hall to Division I basketball scholarships: Adaramoye, Mbeledeogu excelling in Lancaster County

Cats and ferrets can get COVID-19. But don't panic.

Another Lancaster Catholic vs. Northern Lebanon showdown, another battle royale.

A big night of hoops on Tuesday in L-L League girls’ basketball circles, with all five first-place teams in action. That meant facelifts in th…

The stretch drive has arrived.

The clock is ticking.

For the first time in 15 years, a Lancaster-Lebanon League girls basketball Section 1 championship banner will be unfurled inside Hempfield’s …

A very eventful Tuesday night in L-L League girls’ basketball action, when not one but two squads sewed up section championships. Here’s the r…

Just five games on Thursday’s L-L League girls’ basketball schedule — but plenty to discuss. Here’s the roundup, plus some notables and links …

It’s the final week of regular-season play for Lancaster-Lebanon League girls’ basketball squads — and where did those last two months go, by …

Believe it or not, the finish line of the girls’ basketball regular season arrives this week; L-L League teams will wrap up section play on Tu…

And that’s a wrap for L-L League girls’ basketball section play for the 2019-20 season. There are still two more nonleague games on the schedu…

The L-L League girls’ basketball playoffs hit the quarterfinal round on Saturday, with four games at four different venues. Previewing those games …

Lancaster Catholic is still in line to win its third Lancaster-Lebanon League girls basketball championship in a row. Barely.

Up next on the girls’ basketball docket: The District 3 playoffs, which commence Monday night in a gym near you. Lancaster County and Lebanon …

The District 3 girls’ basketball playoffs resume with games on Thursday and Friday. Here’s a preview …

YORK — Manheim Township limited No. 3 seeded Central York to only eight field goals in the first half of Thursday's District Three Class 6A gi…

News, notes, facts, stats and previews as the District 3 girls’ basketball playoffs continue to roll on …

Piggybacking off of our PIAA boys basketball overview, here’s a look at the girls’ brackets, with some preview items, local ties, games and pl…

The final day of the PIAA girls’ basketball state championships was supposed to be Saturday at the Giant Center in Hershey. It would have wrap…