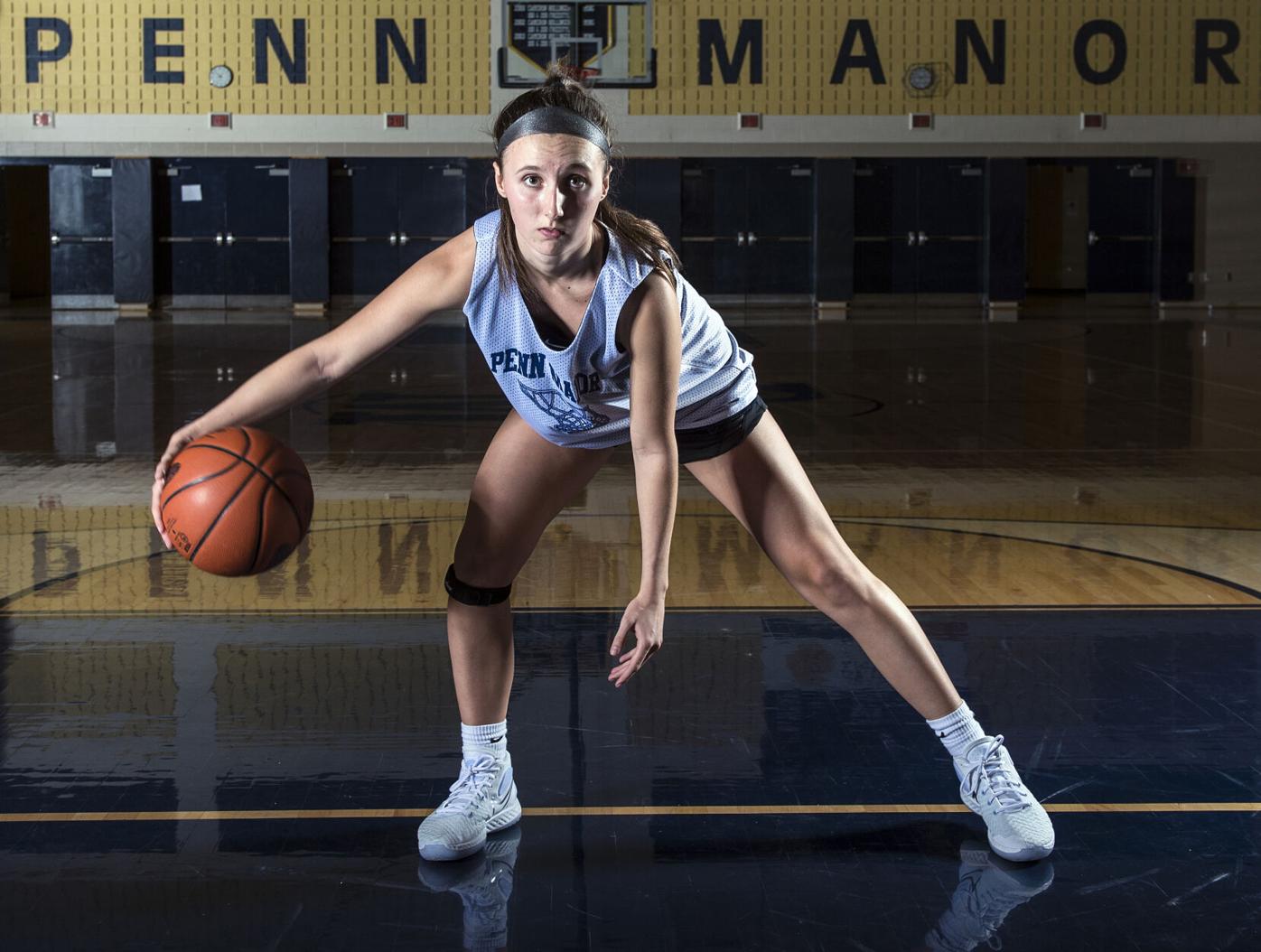 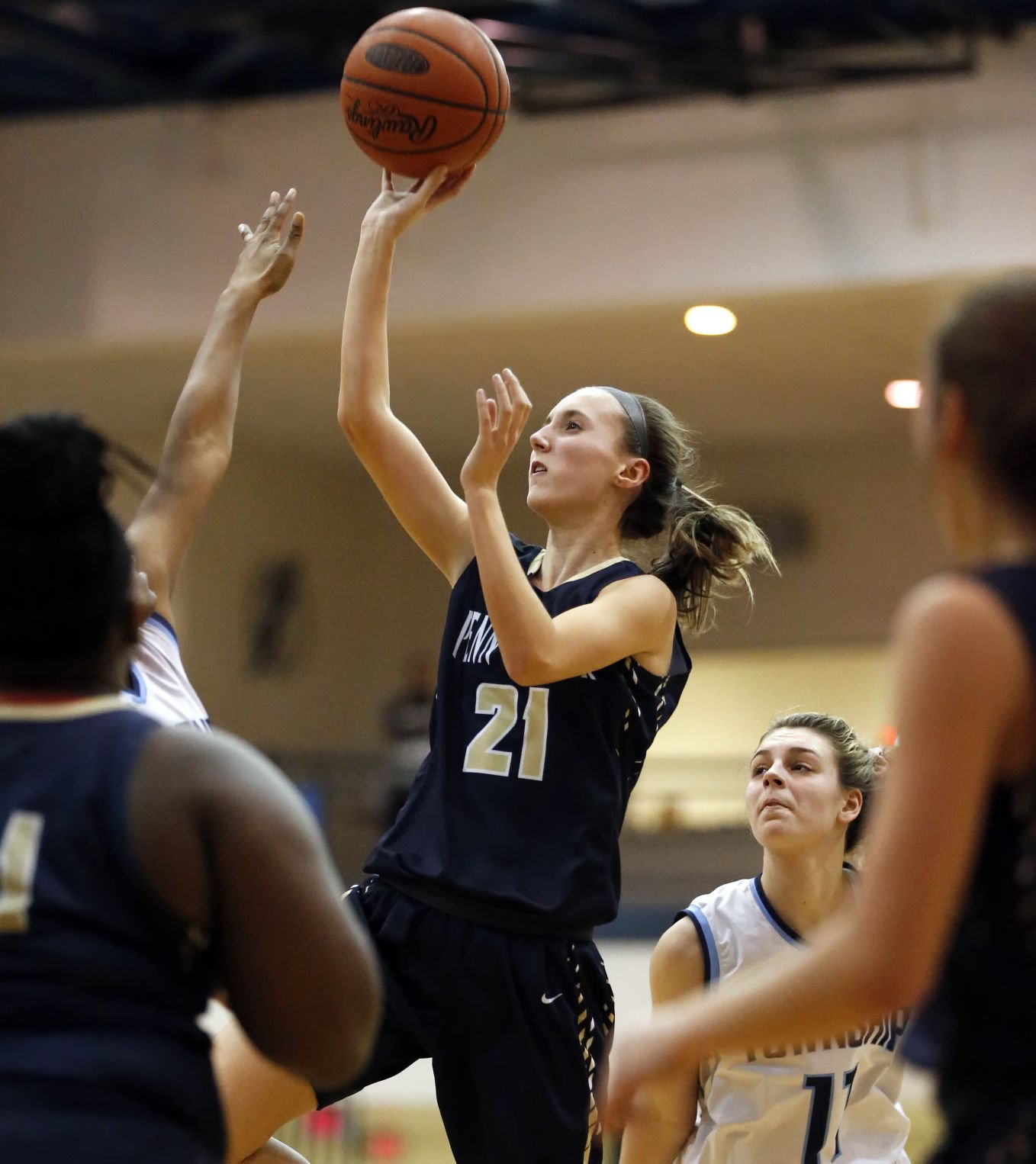 Penn Manor's Morgan Miller (21) goes to the hoop against Manheim Twp. during second half action of an LL League section one game at Manheim Twp. High School Tuesday Jan. 15, 2019. 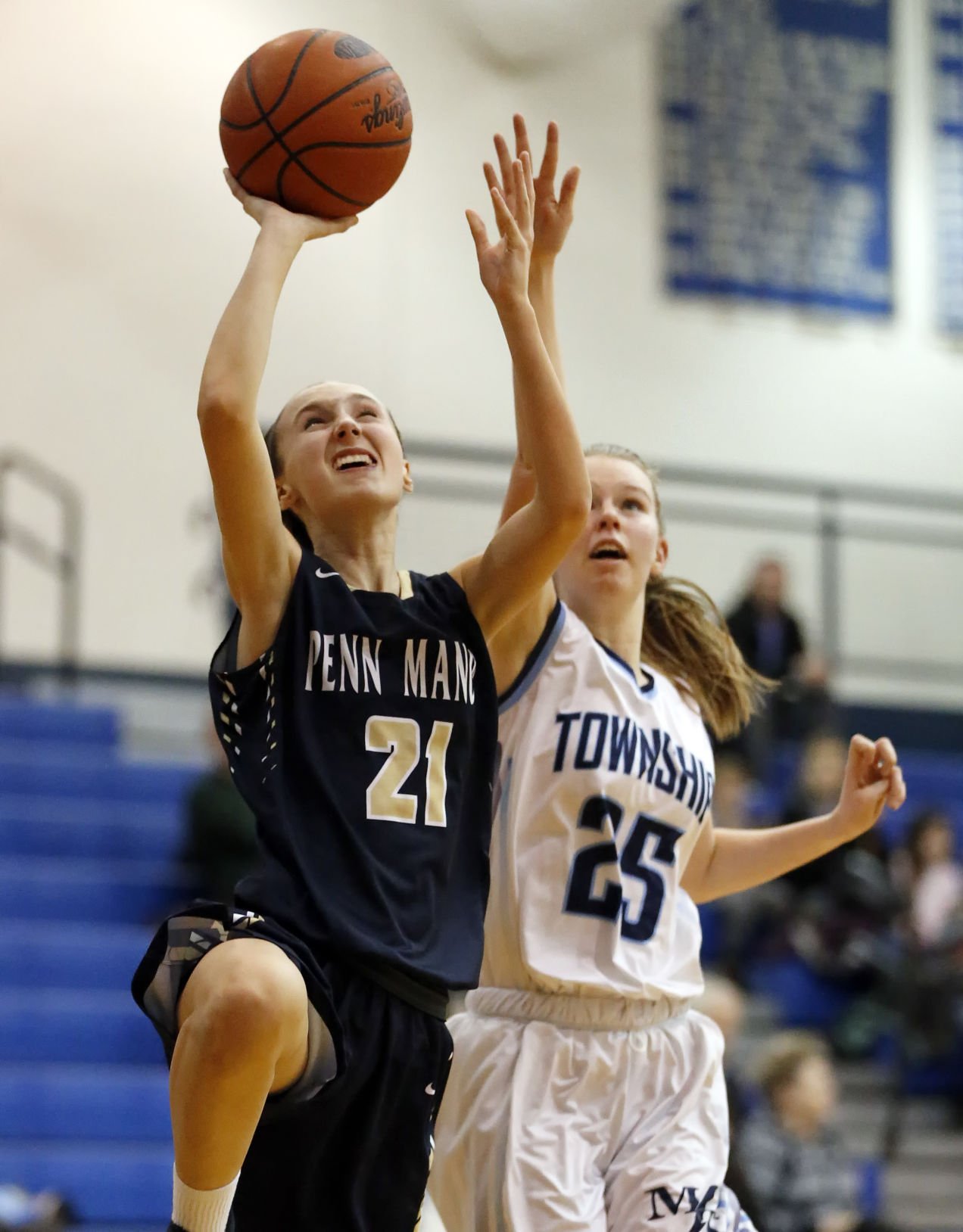 Penn Manor's Morgan Miller (21) goes to the hoop against Manheim Twp. during second half action of an LL League section one game at Manheim Twp. High School Tuesday Jan. 15, 2019.

“Fourth grade,” Penn Manor’s junior hoops standout said. “It was our first rec game at the elementary school, and I remember wearing our little t-shirts and running around out there. It was super fun. I loved it. And I knew then that I wanted to keep doing it.”

She has. And quite well. Miller hit the court sprinting at Penn Manor, earning a spot in the Comets’ starting lineup as a freshman.

In her breakout ninth-grade season, she popped in 10.2 points a game and drilled 28 3-pointers, instantly becoming a must-guard arc threat. Last winter, Miller boosted her average to 12.2 points, and she sank 37 treys, giving her 493 points and 65 3-pointers heading into her junior season — a season that is currently on pause per Gov. Tom Wolf’s mandate because of the coronavirus outbreak.

Miller got the basketball itch from Penn Manor coach Megan Collins, when Miller was a student in Collins’ third-grade class at Central Manor Elementary School in Washington Boro.

“She sparked my interest,” Miller said of her current coach. “I remember her telling us about how her dad helped coach her when she was little, so I knew I wanted to give it a try.”

Miller and teammates Sydney Shepos, Riley Peart and Emily Riggs were third-grade classmates under Collins’ tutelage. Now they’re all teammates on the Comets’ varsity squad. Collins said she remembers teaching that group dribbling drills at recess back in third grade. They’ve all stuck with it over the years and earned varsity spots.

Miller actually found out from the JV coach that she’d made the varsity roster as a ninth-grader.

“I remember talking to the JV coach and he said no, you’re not going to be playing on my team,” said Miller, a wing wizard who stands 5-foot-9. “I asked him what he meant, and he said that I’d be playing varsity. I was surprised. I won’t lie. I knew I put in a lot of hard work, but you don’t expect to come in your freshman year and be starting varsity and shooting 3’s.”

Collins, a former Penn Manor and Elizabethtown College player herself, had no qualms immediately inserting Miller into her starting five as a ninth-grader.

“How’s your work ethic? Are you coachable? Your will. Your drive,” Penn Manor’s sixth-year coach said. “If someone has those things that early, you just know, and I knew. When Morgan steps on the floor, I don’t have to worry about the percentage she’s going to give. It’s the same every time. I saw that in her as a third-grader.”

Turns out Miller is a bit of world traveler. Her dad, Thomas, served in the army for 24 years, so the family was on the move a lot. Morgan’s two older brothers, Penn Manor grads Ryan and Cavin, were born in Maryland.

Morgan was born — get this — in Heidelberg, Germany, and she lived in Deutschland until she was 3. Her dad was then transferred to Kentucky, where the Millers lived for another three years before landing back in Lancaster County. Thomas is a McCaskey grad; Morgan’s mom, Kim, went to Lancaster Catholic.

Miller picked up a basketball for the first time in third grade. She made the traveling team as a sixth-grader and the varsity as a ninth-grader, as she continues to carve out quite the path for Penn Manor.

Miller has also honed her skills on the AAU circuit; she plays for 717 Hoop Dreams, and her teammates there include L-L League standouts Erin Gonzalez from Garden Spot, Yazmeen Norris from Conestoga Valley, the Lancaster Country Day duo of Kiana Wakefield and Piper Graham, plus Penn Manor teammates Lily Sugra and Shepos.

Miller credits Sugra for her screening prowess, allowing Miller to get that extra second to catch and shoot from the arc.

“She sets a good screen,” Miller said. “She can hold it for a second a two, just enough time for me to get around (my defender), catch it and shoot it.”

And, more times than not, make it.

When she’s not in the gym with her teammates, you can probably find Miller in her driveway at home, launching jumpers and working on her game.

“I’ve always had a decent shot,” said Miller, an honors student who carries a sparkling 4.3 weighted GPA. “In the summer I’ll go out in my driveway and shoot all day. It’s something I’ve always enjoyed, and I always wanted to be able to shoot from long distance. So I’d go outside and just shoot and shoot and shoot.”

Sometimes her dad plucks rebounds for her. Miller also uses sidewalk chalk to sketch the 3-point line on the macadam so she can practice her trey work.

“If I was coaching against her,” Collins said, “her name would be at the top of the kids we have to shut down. She’s constantly working hard, day in and day out. She’s always looking to improve.”

End result: Miller is on pace for a 1,000-point career for the Comets. And her goal is to play in college. In the meantime, she’ll keep working on her all-around game, while helping Penn Manor move up the Section One charts.

“We have the talent here, so we’re excited for this season,” Miller said. “We know it’s really tough right now, but we’re hoping we get to play all of our games. Right now, we’re grateful for every minute we get together on the court.”

They came up through their respective prep pipelines with plenty of fanfare. And when Ephrata’s Jasmine Griffin and Manheim Central’s Maddie K…

After a one-month hiatus, basketball is back. Hallelujah.

After an uncertain offseason and a four-week government-mandated shutdown because of the coronavirus pandemic, the high school basketball seas…

For Penn Manor’s girls basketball team, it was just what the doctor ordered.

There were seven games on the L-L League girls basketball docket to get the week kicked off on Monday, including a 4-pack of head-to-head sect…

Just two games in L-L League girls basketball action on Thursday, and they were both Section 1 showdowns, and the race got a facelift.

The 2020-21 girls basketball season has gone from a marathon to a sprint, and the truncated schedule means the Lancaster-Lebanon League sectio…

For the first time this winter, all 25 Lancaster-Lebanon League girls basketball teams this week should all be in action at the same time in t…

With postponements piling up, here's how District 3 basketball chase is coming together

With basketball on pause here early in the week because of the snow, here’s a look at the District 3 power ratings, and who is where with the …

Because of the truncated season, and because the L-L League will not count crossover games toward the league standings this winter, the sectio…

It’s the final full week of games in L-L League girls basketball action, so the final push for District 3 power points is very much on.

The L-L League championship game wasn’t the only tilt on Saturday’s slate, as the regular season hit the tape and the race for District 3 powe…

And then there were four.

The Lancaster-Lebanon League girls basketball coaches have made their lists, checked them twice and cast their ballots for their 2020-21 all-s…