Work has finally begun on transforming the Safe Harbor railroad trestle into a pedestrian bridge that may be a national destination. 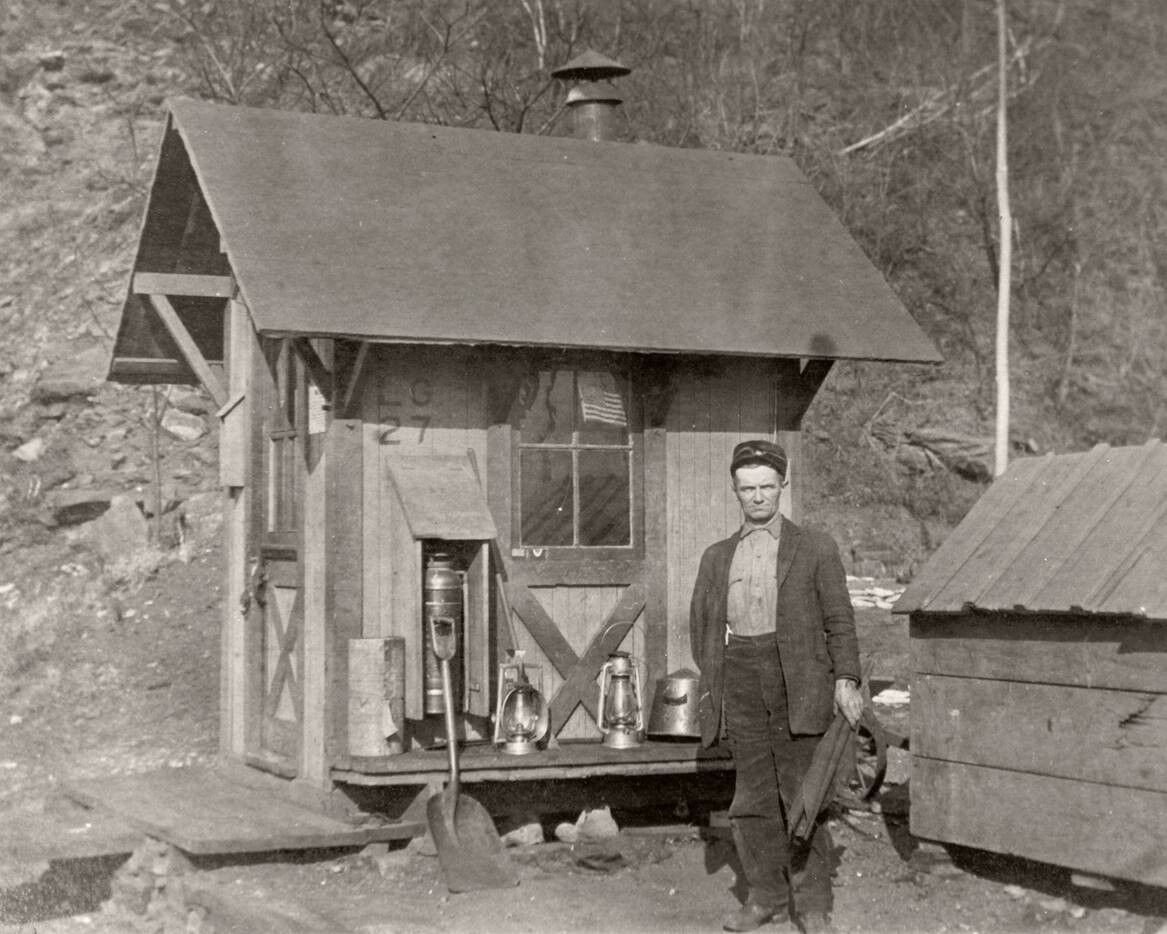 This old watch box hut from along the Enola Low Grade rail line will be reproduced near the Safe Harbor bridge.

Work has finally begun on transforming the Safe Harbor railroad trestle into a pedestrian bridge that may be a national destination.

This old watch box hut from along the Enola Low Grade rail line will be reproduced near the Safe Harbor bridge.

This time next year, Lancaster County residents should at last be able to walk out on the towering, curving 114-year-old Safe Harbor railroad trestle, look down through a glass panel at the mouth of the Conestoga River 110 feet below and take in a sweeping view of the Susquehanna so grand that it is believed people will come from near and far to see it.

Work has begun on the landmark to transform it into a pedestrian bridge, uniting two sections of the Enola Low Grade Trail, the county’s longest recreation trail at 28 miles. The structure, nearly one-third of a mile long, has never before allowed humans to walk on it since it was bult in 1904-1906 and abandoned to trains when the Enola Low Grade line was closed in 1988.

In October 2021, Manor Township officials hope to let the first walkers and bicyclists wander over the Conestoga River on the second-longest railroad trestle in Pennsylvania. That vision began in 1989.

“It’s exciting to be at this moment. It’s hard to believe we are finally here, and it’s taken a long time. But everyone is anticipating crossing that bridge and seeing that view of the Susquehanna,” says Mike Domin, a senior planner for the county Planning Commission.

The $7.8 million bridge renovation between Manor and Conestoga townships is vital in bringing together two sections of the county's most scenic multiuse byway, the 23-mile Enola Low Grade Trail and the 5-mile Manor Township Enola Low Grade Rail Trail. A year ago, it was called the most pressing trail gap in the state by the state Department of Conservation and Natural Resources.

In these COVID times, the Manor Township portion has seen 68,000 users so far this year, more than twice as many who visited in all of 2019. So joining the long-separated rail-trails is timely.

“The bridge is not only an important trail connection. It’s going to be a destination,” Domin says.

Indeed, local and state officials believe the Safe Harbor project will raise the rail-trail’s appeal beyond regional interest and bring economic blessings to towns along the way.

Thus, the Department of Conservation and Natural Resources two weeks ago announced the official formation of the Schuylkill to Susquehanna Greenway, an 85-mile ribbon of interconnected rail-trails from Philadelphia to the Susquehanna near Bainbridge.

Just about half the new Statewide Major Greenway would be in Lancaster County, consisting of both sections of the Low Grade and the Northwest Lancaster County River Trail that follows the Susquehanna for 14 miles between Columbia and Falmouth. The final northernmost segment of the latter trail to Falmouth is being paved now.

Though a majority of the trail sections that would be part of the larger greenway are finished or under construction now, it may take 10 years or more until the entire network is complete.

The Pennsylvania Environmental Council, which helped coordinate the new greenway, predicted it would be “one of the most heavily trafficked in the commonwealth and will be a boon to local recreation and tourism, too.”

Crews for general contractor Rylind Construction have completed 5 miles of fencing, temporarily bisecting the Manor Township Enola Low Grade Rail Trail to move equipment to the bridge. The original wood decking will begin being peeled away any day now.

New concrete decking with railings will be built. Though more expensive than wood, concrete will last longer and can’t be burned like an arsonist did to the all-wood flooring of the Martic Forge railroad trestle over Pequea Creek in 2018.

In two spots, glass panels will be inlaid so users can stare down 110 feet into the Conestoga. As part of the project, Manor Township crews will reproduce one of the original wooded watch box huts, circa 1904, used for warmth and communications by railroad crews who walked the line looking for debris or trouble.

Also planned are two mounted birdwatching scopes, a pavilion and three picnic tables and a small observatory so users can look at the Safe Harbor Dam.

Pushed by Manor Township for years, the bridge rehab project slowly accumulated funding from the state, federal government and Lancaster County. But still there remained an $808,000 funding gap that Manor Township took on.

A successful capital campaign to raise the money is just about closed, with donations from Manor Township residents and businesses ranging from $15 to the $500,000 chipped in by the Lancaster County Solid Waste Management Authority.

“The support we have seen willing to partner with us on this project has really rejuvenated us and made us want what is best for the community,” said Ryan Strohecker, Manor Township manager.

In addition to the Low Grade rail-trails and the Northwest Lancaster County River Trail, the newly designated Schuylkill to Susquehanna Greenway will head east from the eastern Lancaster County line to Atglen Borough. Trail planners envision a SEPTA subway extension to be built in Atglen that will enable greenway users to, say, ride from Lancaster County to Atglen and take a bike onto the subway into Philadelphia to ride other trail sections.

East of Atglen, the greenway will follow the Chester Valley Trail on another old railroad right of way through Chester and Montgomery counties.

From there, an extension would be built to connect to the existing Schuylkill River Trail, following abandoned rail lines that will eventually stretch from Philadelphia to Reading and on to Frackville, Schuylkill County. In 2015, the trail was the named the best urban trail in the nation by USA Today’s Best Readers Choice poll.

As monumental as the Safe Harbor bridge transformation is, there are still gaps before the greenway is realized. A viability study is to be released any day on Manor Township’s plans to connect the southernmost terminus of the Northwest Lancaster County River Trail with the Enola Rail Trail, a distance of about 5 miles. The long-term goal is to simply continue following Norfolk Southern’s rail line along the river. But a short-term solution may be to designate a bike and walking lane on extended shoulders along Route 441.

The 2018 burning of the Martic Forge trestle leaves a temporary gap in the Enola Low Grade Trail. Not enough grant money has been gathered to rebuild the bridge surface, but officials are still hopeful it can be done so both the Safe Harbor and Martic Forge bridges can reopen around the same time. Efforts are under way to improve the trail surface in Bart and Eden townships.

There is one major gap on the Chester Valley Trail.

Missed out on your dose of LNP | LancasterOnline content this past weekend? We got you covered.