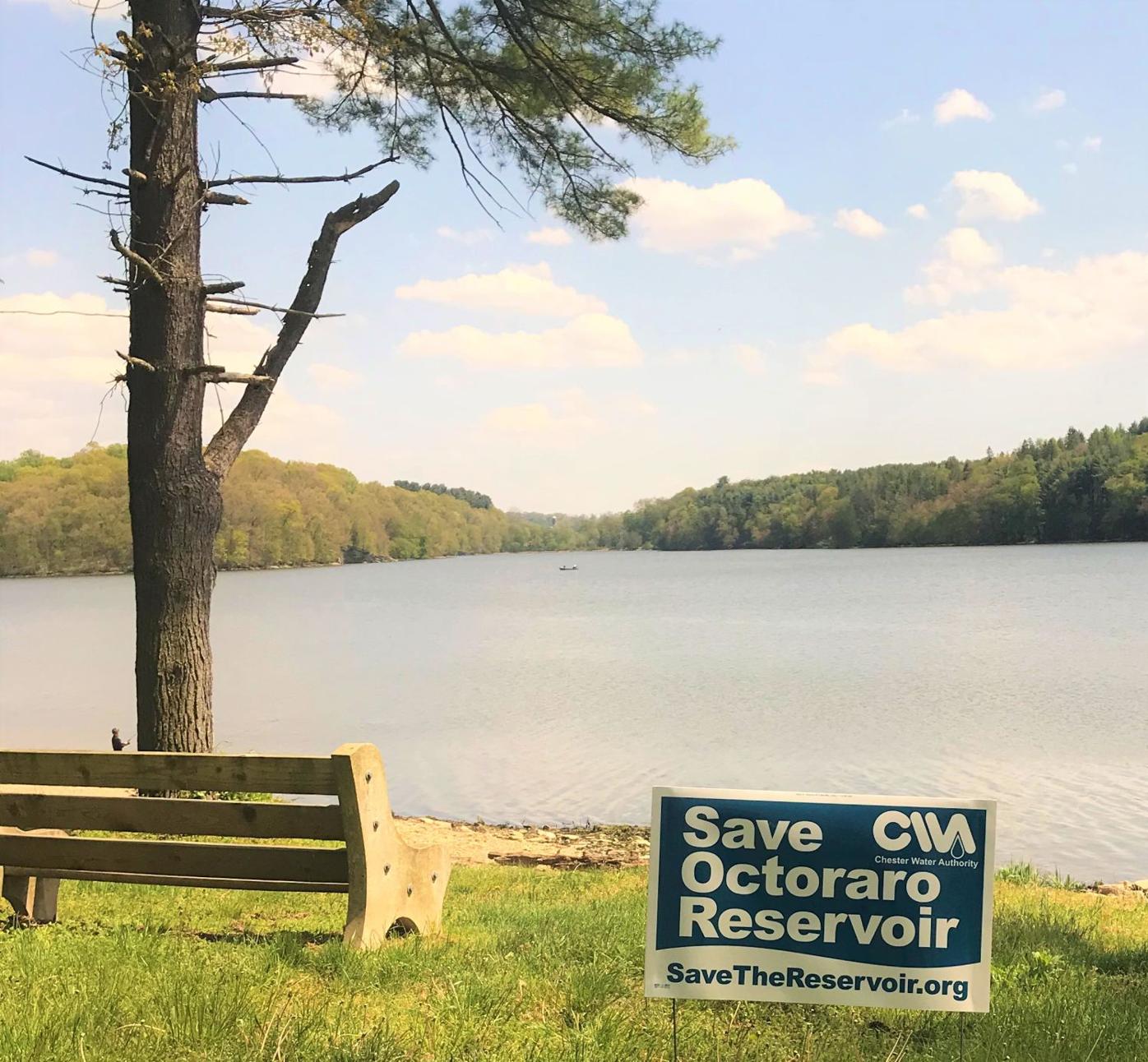 A sign protesting the potential sale of the Octoraro Reservoir along the shore of the lake in Lancaster County. 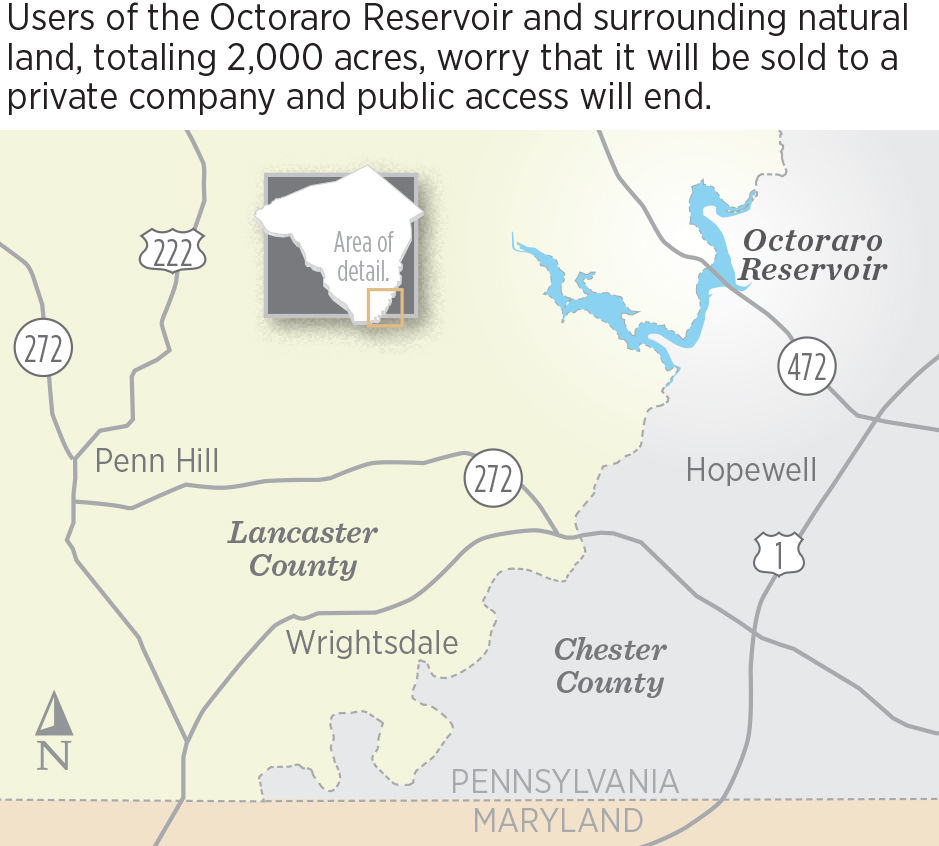 A sign protesting the potential sale of the Octoraro Reservoir along the shore of the lake in Lancaster County.

What’s with all the “Save Octoraro Reservoir” signs sprouting like spring flowers in Lancaster County’s southern end?

No one in Lancaster County drinks water from the 642-acre Octoraro Reservoir, which straddles the Lancaster-Chester line. About 200,000 customers in Chester and Delaware counties do. But the 69-year-old drinking water source and surrounding 1,358 acres of forests, fields and lakeside roads, mostly in Lancaster County, are a cherished draw for public recreation.

People fish and paddle the beautiful reservoir and its many wooded fingers. Hunters flush pheasants from a specially groomed section of fields. Hikers hike. Birdwatchers flock to its variety of wooded and water habitat. Bikers like the secluded roads, as do many residents who drive gravel roads just to gawk at nature. Farmers grow crops on leased land. The grassroots Octoraro Watershed Association, with in-kind help from the Chester Water Authority, has done amazing things getting farmers to put in streamside buffers and other conservation practices.

There was plenty of resentment and opposition when the city of Chester and its Chester Water Authority built the reservoir. Farmland and Octoraro Creek, now a state scenic river, were flooded. People lost their land.

As an olive branch, residents were told at the time that the public would be able to use the land and water. And by all accounts, the independent Chester Water Authority has been a good steward of the land and welcoming of public use.

Now, there is a real fear all those public uses will be taken away if the city of Chester, now in a state-declared fiscal emergency, is allowed — or ordered — to sell the reservoir and its drinking water to a private company. Hence all those save-the-reservoir signs.

There is an assumption that a private company, beholden to maximizing profits for shareholders and wary of public-use lawsuits, will fence off the entire 2,000 acres. It has happened before.

Some Pa. anglers bristle over surprise trout opener, but most agree it was the safe thing to do

“What worries me is if someone gets it who doesn’t have any ties to the community. People feel as if it’s theirs. We’re proud of it,” said Tom Shaffer, of Oxford, who, along with his wife, fishes and relaxes in the lake in a bass boat about 50 times a year.

“A lot of people around here take ownership of it and stewardship of it. We’re proud of it. It would be a crime,” he said.

Although the city of Chester has received three bids from potential private buyers, the likeliest, if courts allow it, is Bryn Mawr-based Aqua Pennsylvania, which has been jockeying to buy the reservoir since 2016. Aqua Pennsylvania owns and provides drinking water in 32 counties in Pennsylvania.

There have been 16 lawsuits filed so far over the potential sale of the reservoir, none of them resolved.

So, I asked Aqua Pennsylvania President Marc Lucca if the reservoir and all 2,000 acres would be sealed off from public use under the utility’s ownership.

“They (people) have nothing to worry about. Reservoir use will remain as it is today,” Lucca said. He added, “The land around the reservoir is not something we are looking to sell. We’re not going to come in there and wipe out this beautiful area that is used by so many people for various reasons.”

“That’s a flat-out lie,” said Francis Catania, attorney for the Chester Water Authority, which is fighting for its life. “They have made no such promise. There is nothing in the documents they have submitted as part of the bidding process that says that. They say one thing to the newspapers, and the documents where their intentions are on record, those intentions are absent. They did not do it at Springton Reservoir, and they’re not going to do it here. Shareholders are not interested in turning that land into a preserved space.”

A case in point the water authority and others like to cite is Aqua Pennsylvania’s purchase of the Springton Reservoir in Delaware County. The utility closed the reservoir and surrounding land to public use shortly after Sept. 11, 2001, and never allowed public access again. Lots bordering the reservoir were sold for high-end homes.

It was fenced off, and Catania calls it a “water fortress.”

In a letter to the Philadelphia Inquirer in 2004, Aqua Pennsylvania said it closed the property because of security concerns and several lawsuits against the company by users who were injured after trespassing on posted parts of the property.

Lancaster weather: The year of no winter

Still, there persists a conviction that the utility would close and develop the Octoraro property.

State Rep. Bryan Cutler ,of Peach Bottom, and fellow Rep. John Lawrence, who represents parts of both Lancaster and Chester counties, have written a letter against the sale of the Chester Water Authority to the state Department of Community and Economic Development, urging the state agency not to allow the sale. So has every state senator and representative in the service area.

One reason, Cutler and Lawrence said, is “to protect public access to the Octoraro Reservoir.” Many other public officials in the Chester Water Authority’s service area have come out against the sale, mostly on grounds that drinking water costs will go up.

The Chester Water Authority is fighting back tooth and nail. It has created a website, chesterwater.com, and Facebook page, Save CWA, that bashes Aqua Pennsylvania. The authority also makes and hands out the “Save Octoraro Reservoir” yard signs.

Authority attorney Catania says the authority started the process to have the 2,000 acres put in a trust where it couldn’t be developed but that action has been blocked by the lawsuits, some of them brought by Aqua Pennsylvania.

Several key decisions are to be handed down in court including if the city of Chester even has the right to sell the independent authority.

Meanwhile, longtime users of Octoraro continue to worry about what might happen.

“We’re basically under attack by a hostile takeover. We could lose everything,” said Jim Neary, owner of Jim’s Live Bait and Tackle and recreation coordinator for the authority. Neary has run his shop and boat rental business on the lake for 20 years. He worries not only about losing his livelihood, but also the special programs for veterans and law-enforcement personnel he and his wife, Gina, spearhead.

“For some of our members, that’s a real concern — loss of access to what is a remarkably good water resource for the locals,” says Rupert Rossetti, president of the Octoraro Watershed Association citizens group.”

More in From rustic tarts to Buchanan's presidential carriage: 10 weekend reads to catch up on today (3 of 9)

It may be only a couple of weeks before clouds of mayflies blacken the skies above the Susquehanna River in northwestern Lancaster County, whe…

“My passion for the Conestoga happened the first time I put a kayak in it and it took me back home. I don’t know what else to say. It just fel…

Soon, millions of mayflies are expected to make their annual flight over the Susquehanna River in Lancaster County, swarming so densely they’v…

Hoping to protect plantable soil while reducing waterway pollution, the state Department of Agriculture has made $2.5 million in grant funding…

Come with me back to a time when going to hunting camps in Pennsylvania involved train rides, then long mule shuttles to primitive cabins or tents.

Since I’ve been working from home for more than a year, a majority of my daytime has been spent looking out a 4-foot-by-8-foot window. You may…