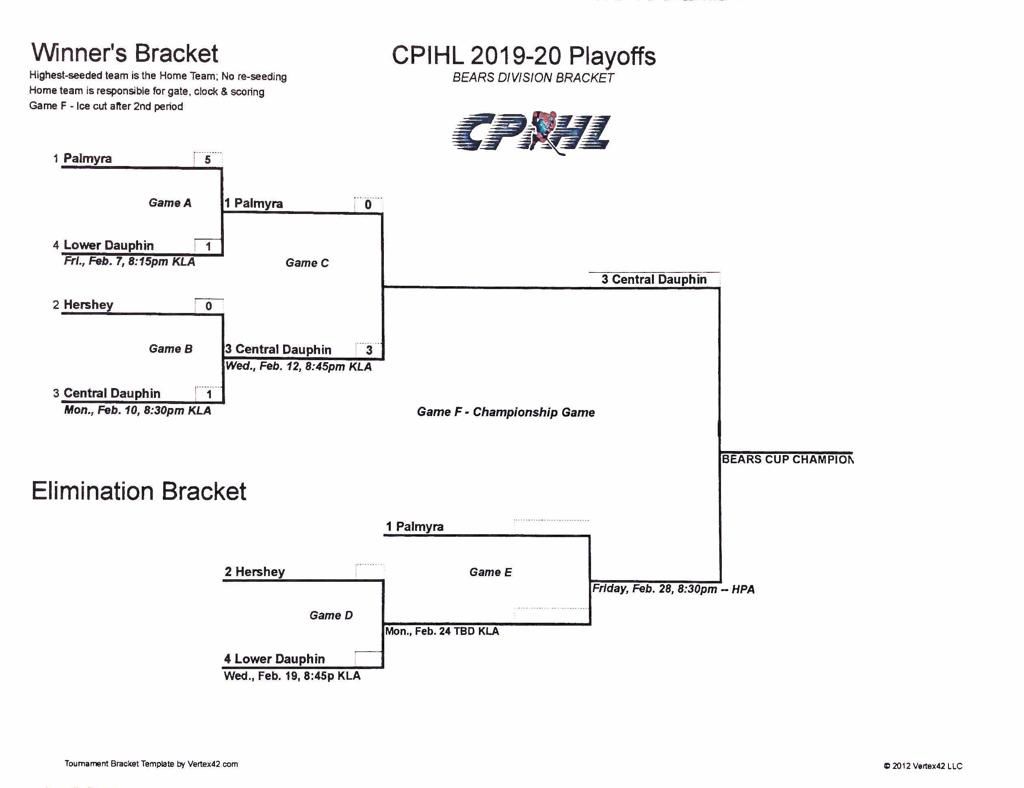 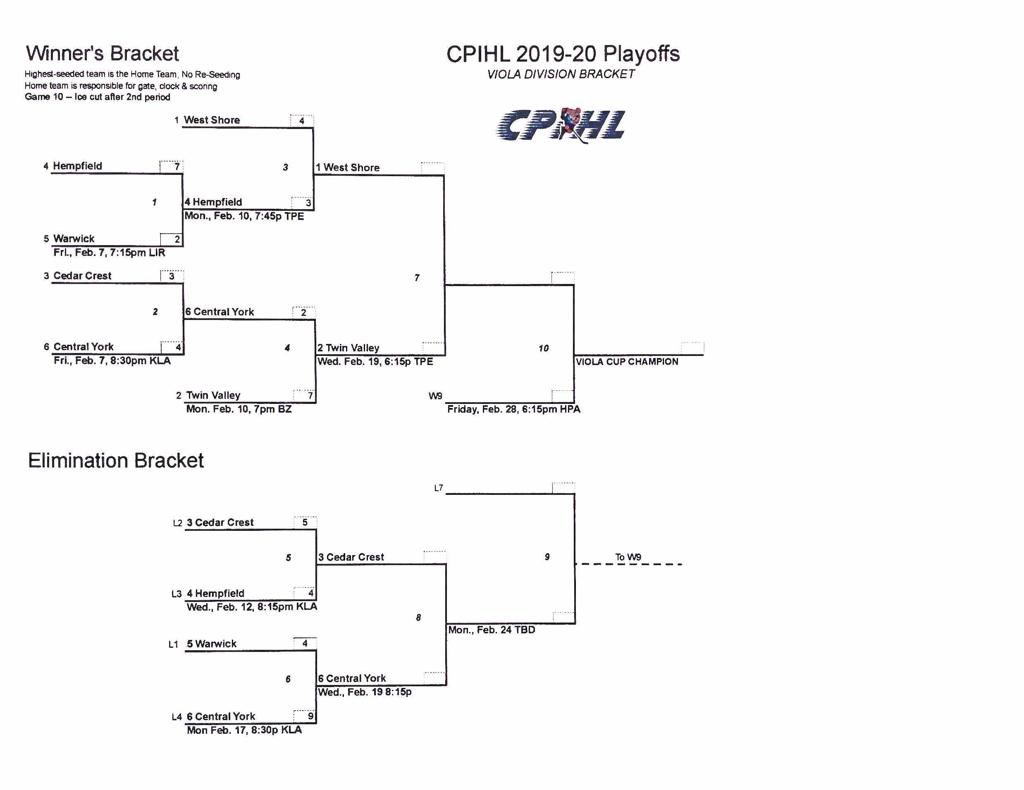 Here's a look at the matchups.

On the line: The winning team advances to face Palmyra in an elimination game cheduled for Feb. 24 at Klick Lewis Arena while the losing team bows out of the tournament.

How they got there: The Trojans suffered a 1-0 first-round playoff loss to Central Dauphin Feb. 10. The Falcons defeated Manheim Township in the Bears Division play-in game before opening the double-elimination round with a 5-1 loss to Palmyra Feb. 7.

Goaltenders: Hershey's Christopher Larkin stopped 57 of the 63 shots he faced against Lower Dauphin in the regular season. He also turned away 20 of the 21 shots he faced in the team's playoff opener. Lower Dauphin's Eric West compiled a 3.50 goals-against average and a .881 save percentage in the Falcons' two playoff games. He had a .900 save percentage in three regular-season games against Hershey.

Notable: The team that has scored first lost all three regular-season games between the two clubs ... Hershey outscored Lower Dauphin 5-0 in the third period of their head-to-head games ... The loss to Central Dauphin snapped a five-game winning streak for the Trojans.

On the line: The winning team advances to the Feb. 28 Viola Cup championship game scheduled for 6:15 p.m. at Hersheypark Arena. The losing team meets either Cedar Crest or Central York in an elimination game with the other championship-game berth on the line.

How they got there: After receiving first-round byes, West Shore opened the playoffs with a 4-3 overtime victory over Hempfield and Twin Valley topped Central York 7-2.

Head-to-head: The only time the two teams met on the ice during the regular season went to overtime. West Shore won it, 6-5, on a Christian Holtzapple goal 3:00 into the extra frame.

Goaltenders: West Shore's Alex Rigling made 23 saves on 26 shots against in the playoff win over Hempfield. Caleb Dinsdale got the playoff start in goal for Twin Valley, stopping 17 of the 19 shots he faced.

Notable: West Shore erased a 3-2 third-period deficit against Hempfield to advance in the playoffs. Shore also came back from a 5-4 deficit in the regular-season game against Twin Valley ... Nine different Twin Valley players had at least a point in the Raiders' playoff opener.

On the line: The winning team advances to face either West Shore or Twin Valley in an elimination game scheduled for Monday at a site and time to be determined. The losing team makes its postseason exit.

How they got there: The Falcons, with players from Cedar Crest, Lebanon, Lebanon Catholic and Elco, dropped a 4-3 shootout decision in their playoff opener vs. Central York Feb. 7 before bouncing back with a 5-4 overtime win over Hempfield Feb. 12. Before the Panthers defeated Cedar Crest, they topped Annville-Cleona in the Viola Division play-in game. Twin Valley knocked them into the elimination bracket with a 7-2 decision Feb. 10, and they advanced with a 9-4 win over Warwick Monday.

Head-to-head: Prior to their first postseason matchup, Cedar Crest had won a pair of regular-season games against Central York with a 5-0 victory Jan. 3 and a 6-3 decision Jan. 15.

Players to watch: Cedar Crest's Brock Smith had two goals, including the game-tying tally, and an assist in the Falcons' win over Hempfield. Central York's Logan Myers leads the CPIHL in postseason scoring with seven goals and two assists. He had a hat trick in the win over Warwick and a goal and an assist against Cedar Crest in their playoff meeting.

Notable: Cedar Crest was outscored by a total of 5-1 in the second period during the playoffs. Conversely, the Falcons outscored opponents 6-0 in the third period and overtime ... Central York has won six of its last seven games.

The Latest: Trump says he will vote in person