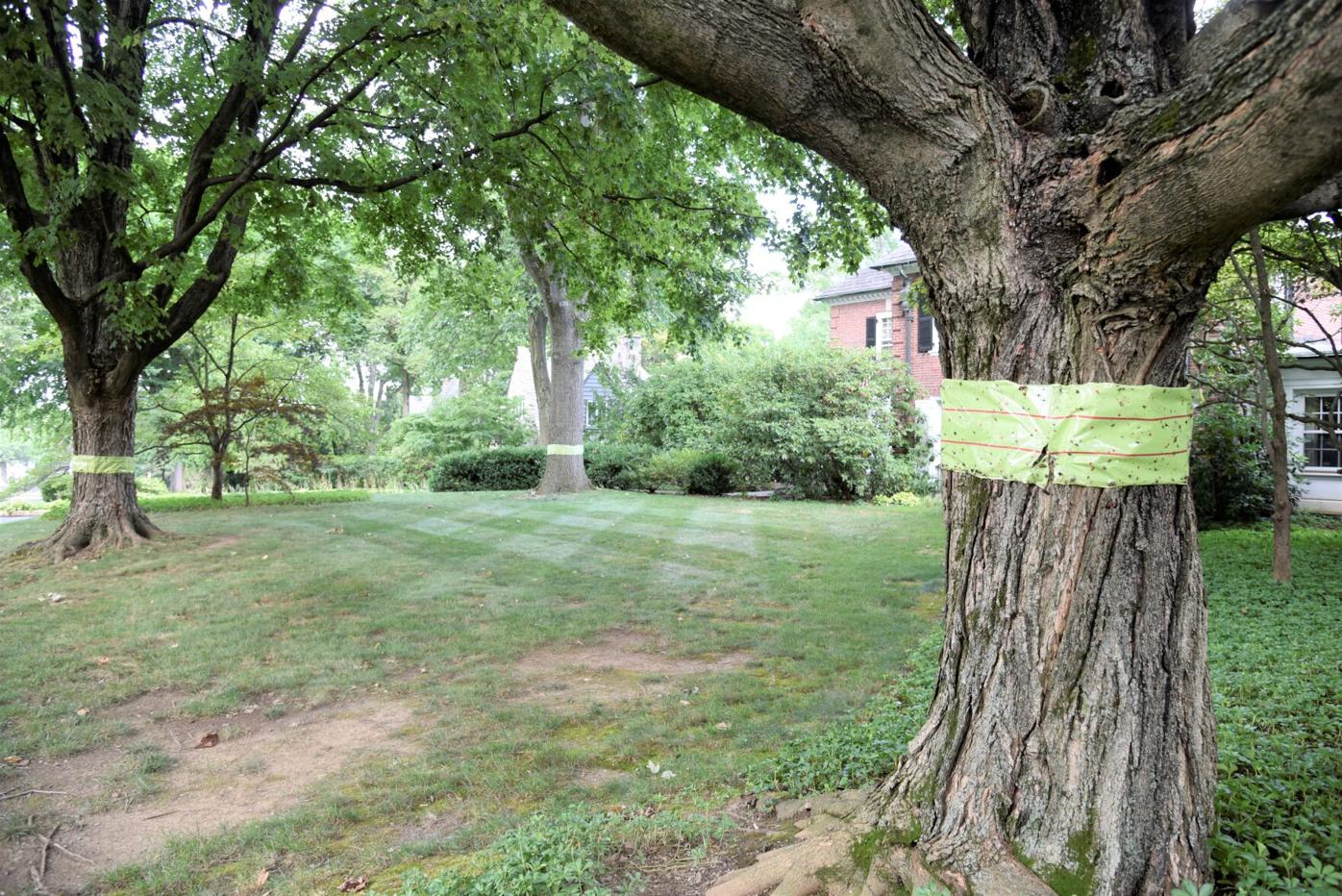 Multiple trees with sticky tape to trap spotted lanternflies in a yard in Lancaster Township. 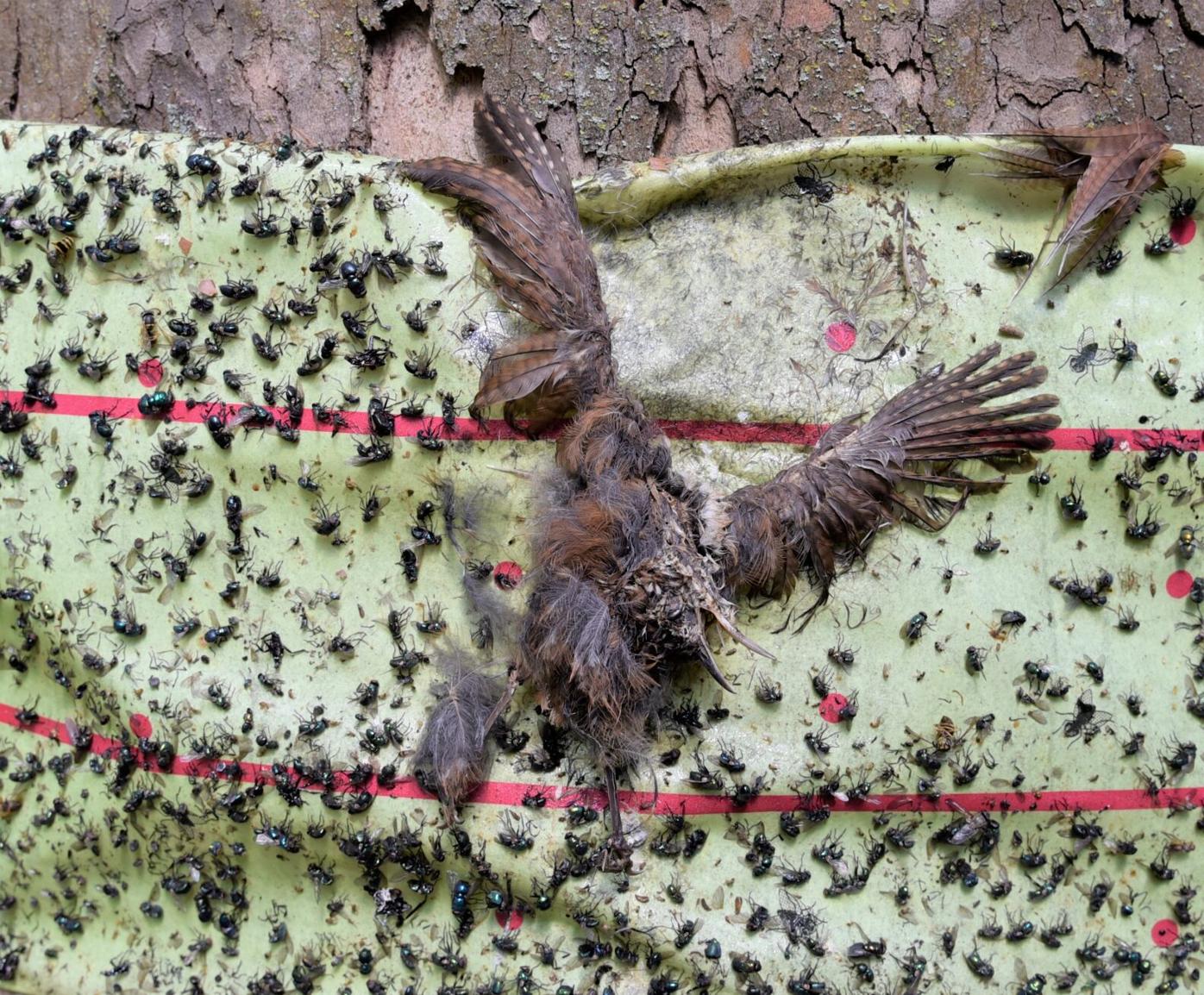 A bird killed by sticky tape put up to catch spotted lanternflies in Lancaster Township. 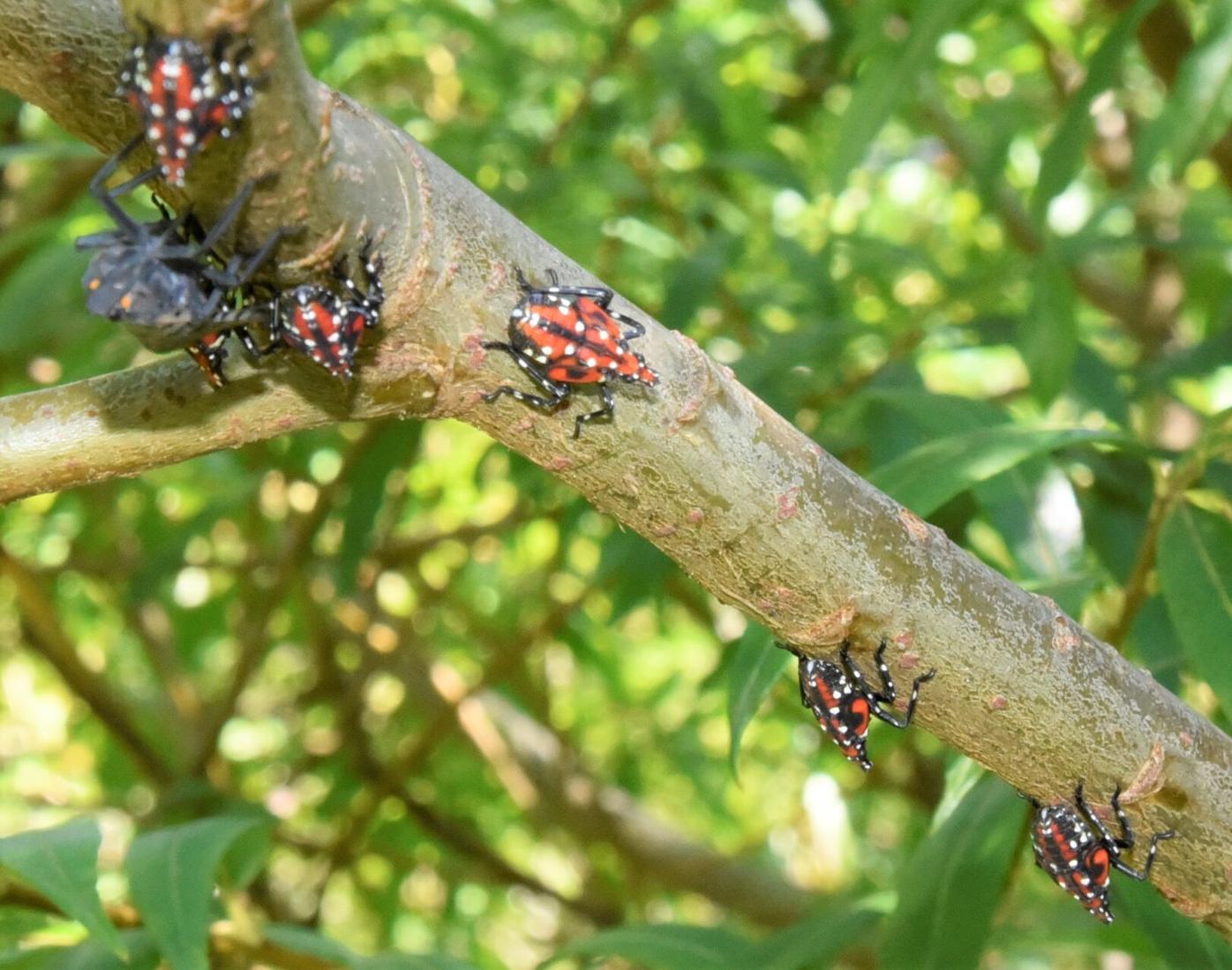 Spotted lanternflies gather on a tree in Lancaster Township.

Multiple trees with sticky tape to trap spotted lanternflies in a yard in Lancaster Township.

A bird killed by sticky tape put up to catch spotted lanternflies in Lancaster Township.

Spotted lanternflies gather on a tree in Lancaster Township.

Many well-meaning Lancaster County residents are falling victim to a horrible solution-gone-wrong that is killing birds, animals, pollinators and other beneficial insects by the thousands.

Trees in yards across the county are sporting bands of sticky tape designed to slow the invasion of spotted lanternflies, a destructive invasive insect that has exploded in the area this spring and summer.

Sticky tape, also known as sticky bands, has been the cheapest and easiest-to-install tool to arrest the bug and was recommended initially by state agencies and Penn State Extension services. The tape has become a big seller in garden shops and big-box stories like Lowe’s and Home Depot — the Lowe’s I went to was sold out — and online.

But that was before birds started showing up plastered alive against the sides of trees and people realized the solution is worse than the problem.

Tracie Young, a licensed rehabilitator who runs Raven Ridge Wildlife Center, in Washington Boro, has seen woodpeckers, hawks and other birds, as well as bats, opossums, snakes, flying and gray squirrels and other wildlife brought to the center on cutaway sections of tape by horrified residents.

Some of the wildlife is attracted to the tape by the sight of struggling insects. Others are just following their natural movements up and down trees.

“It’s very stressful to us when you have these animals who are crying out in pain and stressed out. It’s horrible and something has to be done,” Young says.

Young estimates the center is getting about two birds or animals every day, grotesquely splayed on tape. With broken bones, tongues ripped out, skin pulled off and stressed, only about 10% survive.

If you find a bird or animal stuck on tape, do not try to free it. It takes special chemicals to dissolve the substance. Rather, cut the tape around the critter, place it in a box where it is warm and quiet and call Raven Ridge Wildlife Center at 717-808-2652.

A few weeks ago, The Schuylkill Center for Environmental Education, which includes a licensed wildlife rescue service for the Philadelphia area, put out an urgent bulletin with a #Saynotostickytape hashtag, noting it had received more than two dozen entangled birds in a single week.

Craig Boyhont, a Lititz resident, took a morning walk a few weeks ago and was surprised to see about two dozen homes sporting the tape on trees. He also spotted two dead downy woodpeckers stuck in different yards. One of the landowners, he noticed later, put chicken wire over the tape to spare birds. The other did nothing.

Few of the sticky tape manufacturers warn of collateral damage to wildlife, including beneficial insects that get stuck.

Now, alarmed wildlife rehabilitators around the state, Penn State Extension, the Pennsylvania Game Commission and others are trying to halt the killing. LNP has written stories (bit.ly/3gCNiDx) about the danger, but it still seems to be escalating.

Some local residents have knocked on neighbors’ doors, alerting them to the wildlife threat in their yards.

Fortunately, it’s easy to avoid being an inadvertent animal killer: Don’t use the tape. There are other funnel-shaped traps, sometimes called circle traps, that hang on a tree and won’t catch wildlife. One new such product being suggested by rehabbers is The LanternTrap! Go online to lanterntrap.com. Penn State Extension has been recommending a do-it-yourself circle trap (bit.ly/2PxaXJD).

If you want to use the sticky tape, it can be made safe by placing window or garden screen, landscape grid or chicken wire elevated over the top of the tape so lanternflies can climb into the trap but birds and animals don’t come in contact with the surface. Pushpins work well in fastening the screen or wire over the tape.

Others have suggested cutting sticky tape so that it is only 2 or 3 inches wide to reduce birds and animals becoming stuck.

“We’ve been trying to get people away from the sticky paper entirely,” says Heather Leach, a spotted lanternfly control expert with Penn State Extension. “A lot of people don’t want to use chemicals on their properties, but unfortunately the tape has had unintended consequences.”

Leach says residents shouldn’t feel a call to duty to use traps of any kind to halt the lanternfly spread. “We actually don’t think that trapping is likely to reduce the overall populations of spotted lanternflies,” she says, though she adds that use of the traps can knock down infestations of the bugs in individual yards or vulnerable trees.

The Pennsylvania Game Commission has addressed the problem with posts on Facebook and in field officer reports, recommending people wrap chicken wire around the tape strips.

Volunteers with Raven Ridge plan to soon get permission from local businesses to put up warnings of wildlife harm from sticky strips next to the products, and recommendations on how to make them safe.

When Bob Walter thinks about the Little Conestoga Creek, his mind often wanders back to the 1700s, a time when colonials were just settling La…

With one arm extended toward the base of a tree, Amanda Goldsmith reached out, pulling away a covering of wire mesh to reveal a band of sticky…

All of us knew this day would come. That a For Sale sign would go up amidst the stinging nettle on the edge of the last patch of trees in our …