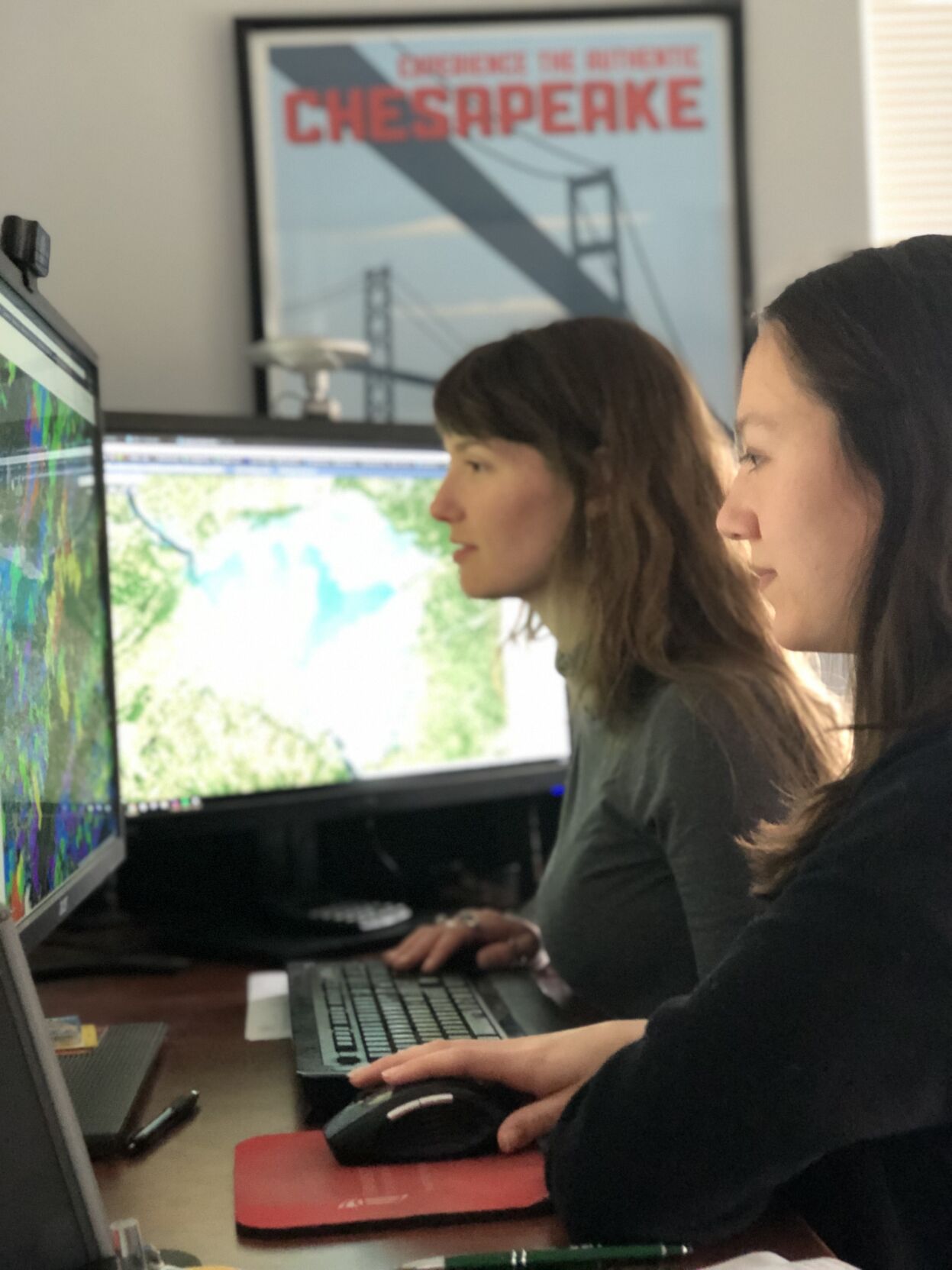 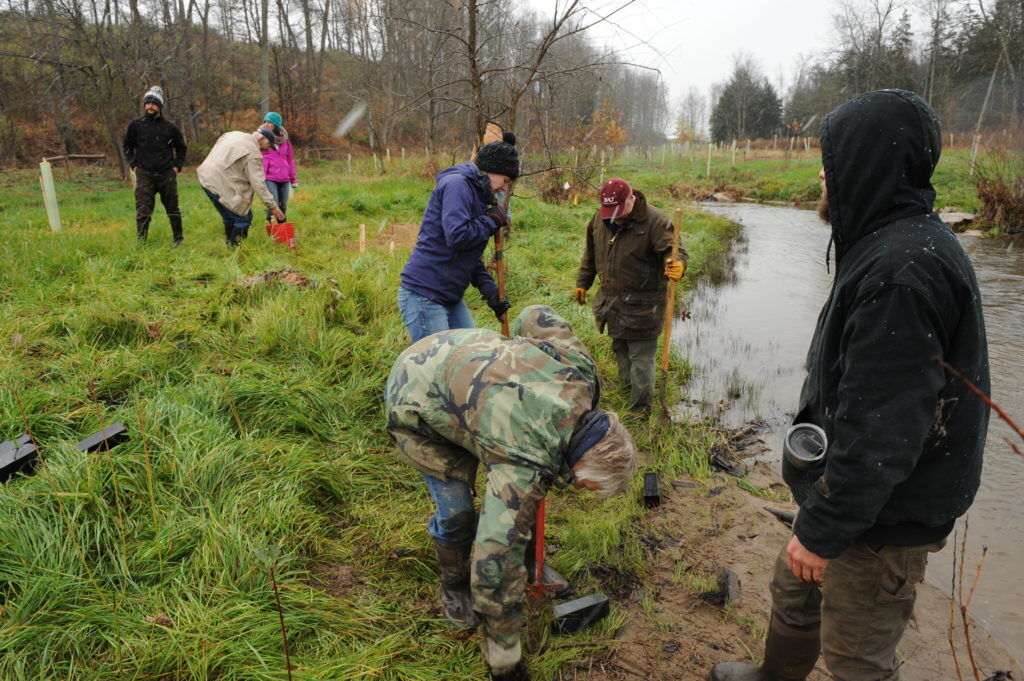 Crews plant trees along a stream in Centre County as part of a pioneering "precision conservation" project in Pennsylvania, including Lancaster County, that uses high-resolution aerial images to find land where water quality can most effectively be improved.

Crews plant trees along a stream in Centre County as part of a pioneering "precision conservation" project in Pennsylvania, including Lancaster County, that uses high-resolution aerial images to find land where water quality can most effectively be improved.

A few months ago, thanks to improvements farmers made on their land, two small tributaries to Pequea Creek were removed by the state from the list of impaired streams in Lancaster County.

They were the first waterways in Lancaster County to be removed from the official list of polluted waters in more than 20 years.

Now, a new project has been launched in the county to repeat that feat and get eight priority stream sections similarly cleaned up and delisted as quickly as possible.

“People in Lancaster County have been hearing about cleaning up our streams for a long time but have no sense it’s happening. Part of what we’re excited about here is getting people to see that clean streams is an actual possibility,” said John Cox, chairman of the board of Turkey Hill Dairy and a member of Lancaster Clean Water Partners, a local group helping with the project

“Stream delisting is important as something to really celebrate and potentially get landowners and local communities excited,” added Carly Dean, project manager for the Annapolis, Maryland-based Chesapeake Conservancy, which is spearheading and funding the project.

The Rapid Delisting project, as it is called, is being drawn up with the considerable input of more than 30 local organizations and municipalities. They are close to finalizing the eight targeted streams from each of the county’s major watersheds.

Each will be picked because of cooperative landowners and water quality that can be dramatically improved by conservation practices. Most likely will be headwater streams.

Besides the rapid cleanup goal, what’s unique about the initiative is that the priority streams are primarily selected by people sitting at computers examining high-resolution aerial images of landscapes in the county.

From changes in elevation and land uses, trained Chesapeake Conservancy staffers can determine such things as the rate of runoff, where water concentrates, steep slopes, effectiveness of vegetation buffers, types of land cover and more.

“We like to think of it as an MRI snapshot of the landscape,” said spokeswoman Jody Couser.

Once the stream sections are selected, landowners — usually farmers in Lancaster County — will be approached about a willingness to allow funded conservation measures, known as best-management practices, to be put in place.

It’s called Precision Conservation and the conservancy has pioneered its use. It can, according to the group, “put the right restoration and conservation practices in the right places at the right scale while ensuring that they are working as designed.”

The conservancy, which has received more than $6 million from the U.S. Environmental Protection Agency to map out the entire Chesapeake Bay watershed with high-resolution imagery, hopes the effort in Lancaster will become a prototype to be used throughout the bay.

“It’s revolutionizing how conservation is being done in the Chesapeake Bay,” Couser said. “Information is power.”

The Lancaster Clean Water Partners, a countywide group that has a goal to provide clean and clear water in local waterways by 2040, is enthusiastic about the pilot project.

A science-based approach and concentration on agriculture runoff presents the best way for Pennsylvania to meet its commitments to reduce harmful sediment and nutrients that end up in the bay, said Joellyn Warren, a West Lampeter Township resident and chair of the Lancaster County Clean Water Consortium, another local water group.

“We’re glad we can see on-the-ground results for clean and clear water.”

The effectiveness of the Precision Conservation approach to determine which landscape factors have the greatest effect on water quality was demonstrated between 2016 and 2019 on land along 11 streams in Centre, Clinton, Lycoming and Huntingdon counties.

Once the eight streams are picked and landowners agree to conservation work, it will take several years for the on-ground work to be done.

And maybe 10 to 12 years before water quality improves to the point for a stream to be removed as a polluted stream. Evidence will largely come from small aquatic insects that need clean water, known as macroinvertebrates, again populating the streams.

“It took hundreds of years to get these streams in this condition, so 12 years is rapid recovery,” Cox noted.

Added Matt Kofroth, watershed specialist for the Lancaster County Conservation District, “It does have far-reaching implications for us. We’re the issue for cleaning up the bay and this is one way of going about doing it.”

It is hoped federal funding will pay for on-farm improvements such as streamside buffers, cover crops and manure control.

“I think there is a mythology out there that our farmers aren’t doing the right thing,” Cox said. “That’s not true. A lot of small farmers simply can’t do or afford to do it. It’s not that they don’t want to. We’re helping them identify what would be best for their farm, how to get that done and then give them financial support.”

A bill to extend and strengthen the state’s mortgage and rent assistance program will get a new chance to pass the legislature this week, less…

When I was a lad visiting my grandparents’ farm in Illinois, I would sometimes carry a .22-caliber rifle and walk along a thick hedgerow betwe…

Carrying a long, narrow shovel, Steve Groff walked into a field on his Holtwood farm, pausing when he reached the right spot to thrust the too…

As Dellinger Run wends its way toward Chiques Creek, it stretches through 56 acres of farmland in Rapho Township, where owner Mark Heller enjo…