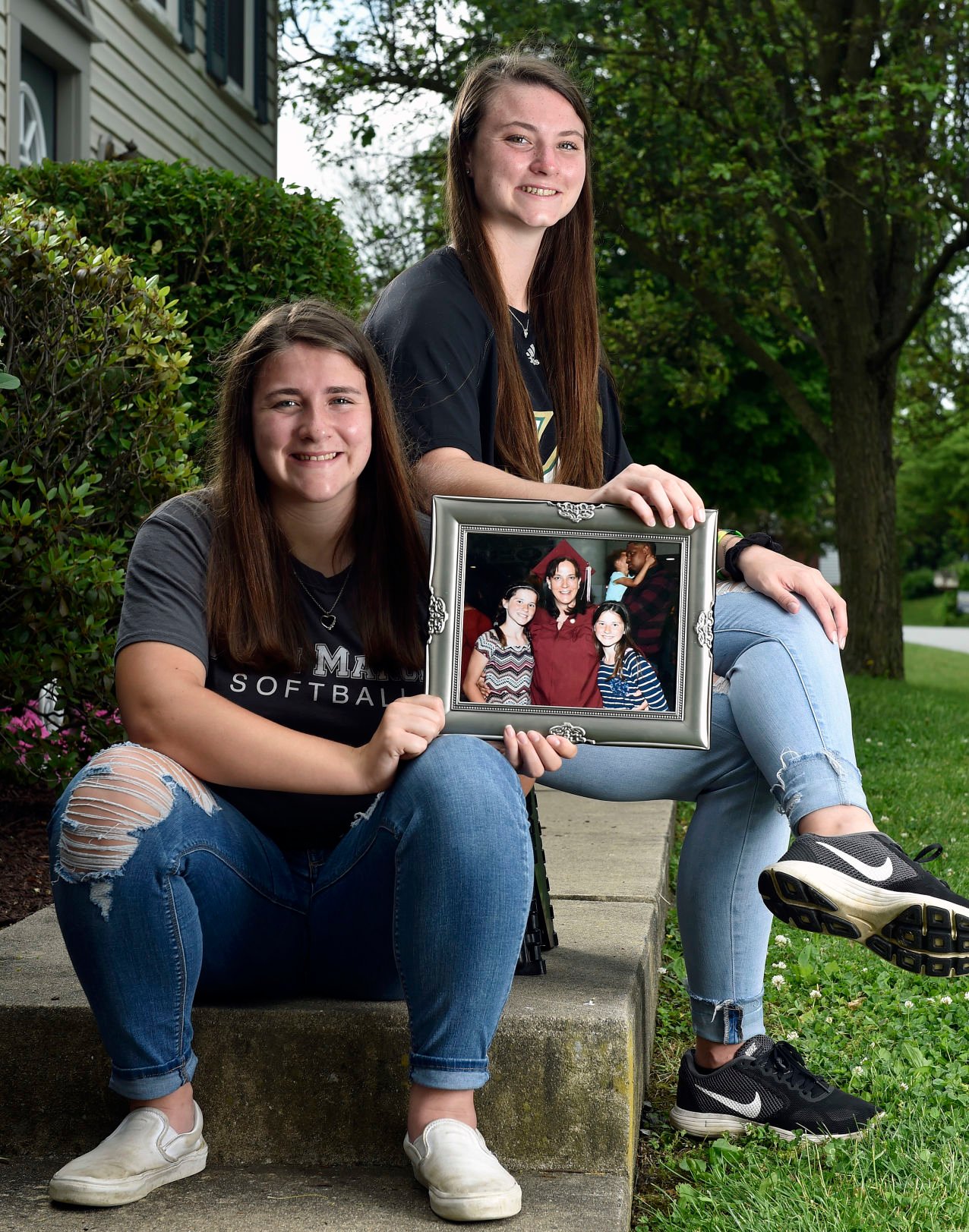 Current and former Penn Manor softball standouts Tori Hook (left) and Brittany Hook hold a 2018 photo of their mother Melissa Hook, posing with their twin sisters Morgan and Chloe Hook, outside their home in Willow Street on Friday May 29, 2020. The Hook's lost their mom unexpectedly back in February. 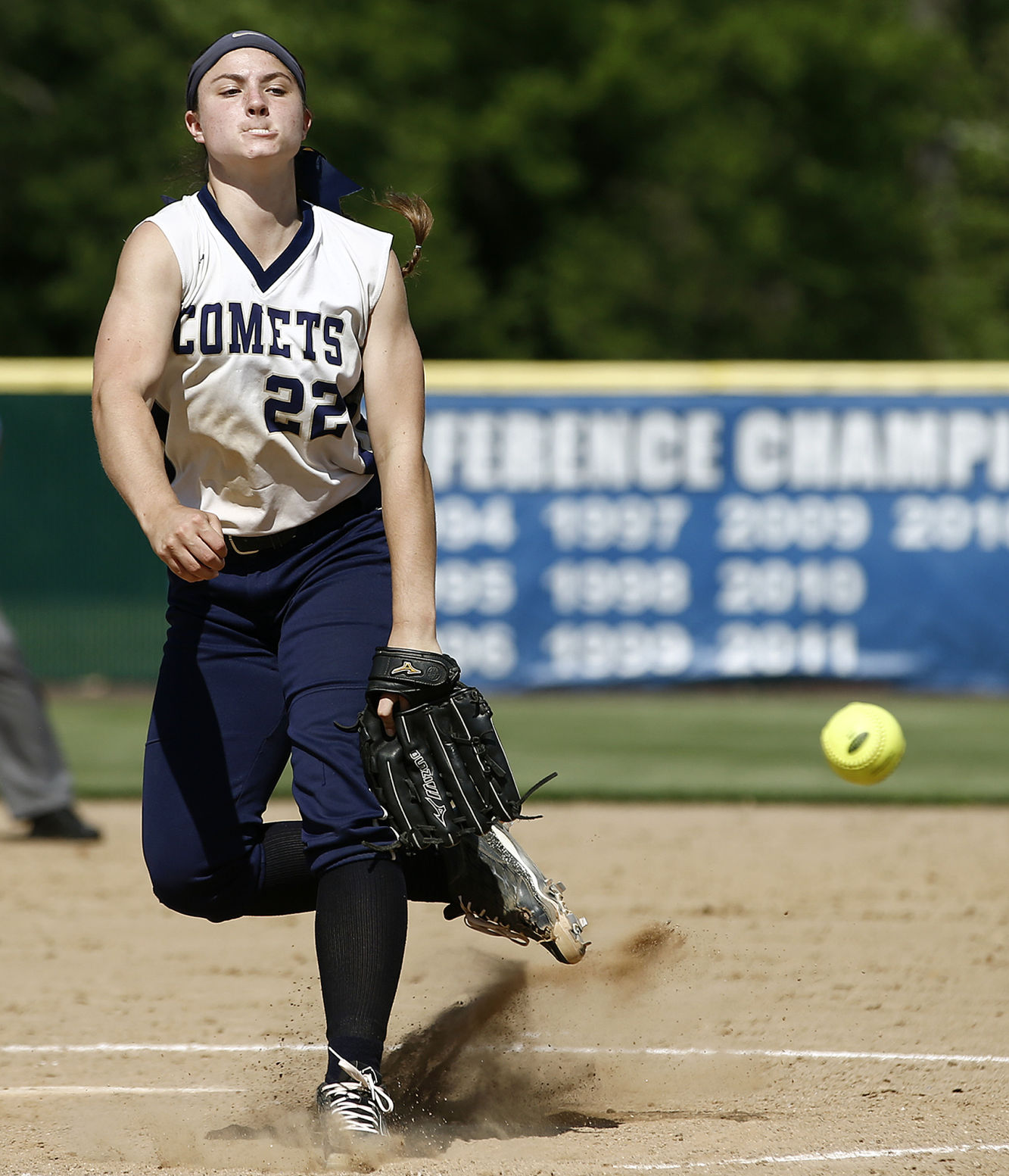 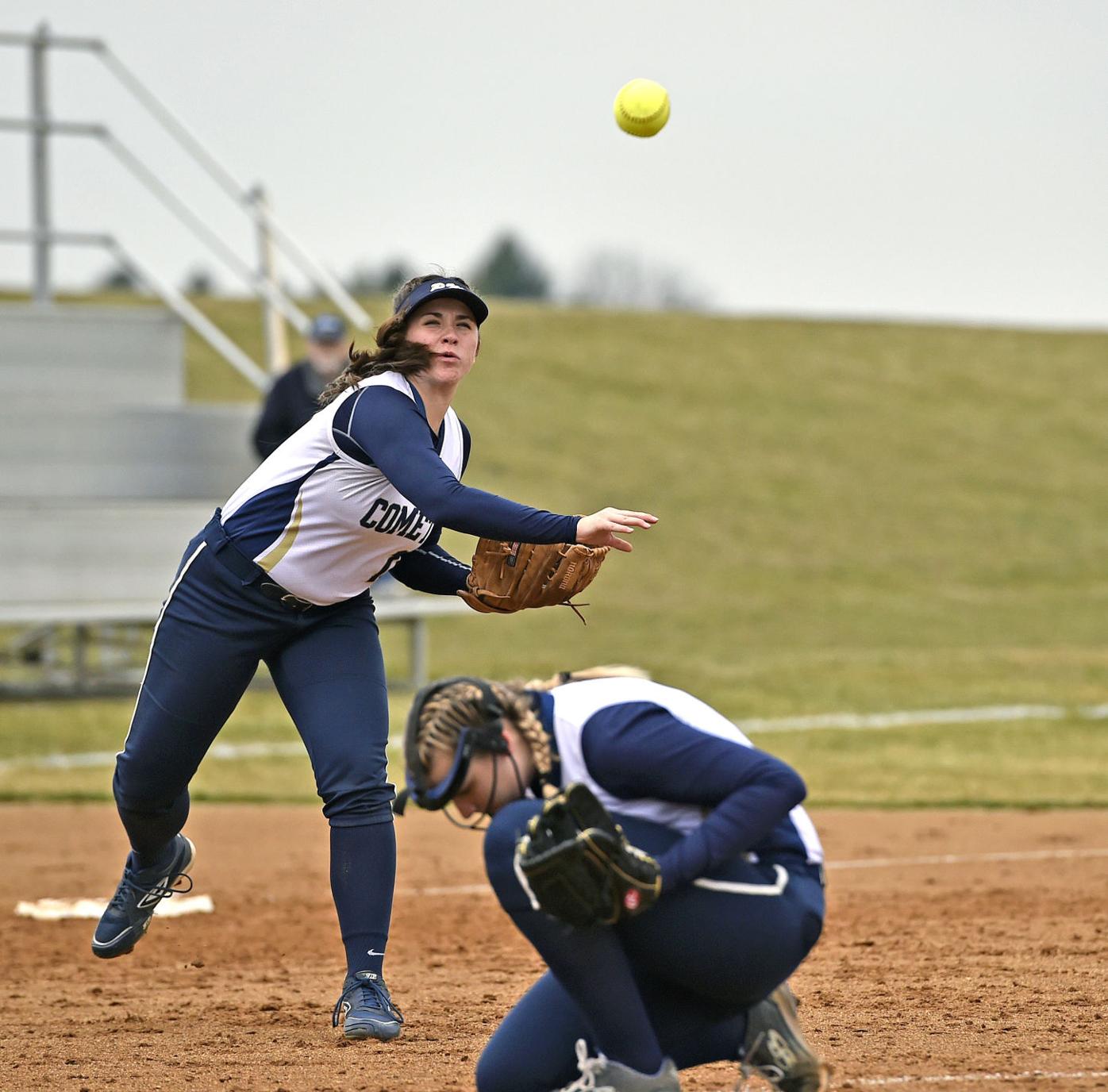 Penn Manor third baseman Tori Hook (10) takes out the runner at first base against Warwick during second-inning action of an L-L League Section 1 softball game at Warwick Middle School on Friday March 29, 2019.

Current and former Penn Manor softball standouts Tori Hook (left) and Brittany Hook hold a 2018 photo of their mother Melissa Hook, posing with their twin sisters Morgan and Chloe Hook, outside their home in Willow Street on Friday May 29, 2020. The Hook's lost their mom unexpectedly back in February.

Penn Manor third baseman Tori Hook (10) takes out the runner at first base against Warwick during second-inning action of an L-L League Section 1 softball game at Warwick Middle School on Friday March 29, 2019.

Feb. 4 was supposed to be a fun moment for former Penn Manor ace pitcher Brittany Hook, who was setting sail on her sophomore season for the University of South Florida’s softball squad in Tampa.

That day, USF was taking on Team USA in a preseason exhibition game. And while Hook got an inning in the circle, she pitched with a heavy heart.

Just a day earlier, back in Millersville, her mother had died, suddenly and unexpectedly, of a cardiac event while at work. Just 48, Melissa (Breitenbach) Hook and husband Michael loved watching their daughters — Brittany, Tori and 12-year-old twins Chloe and Morgan — play sports.

Melissa Hook had been a fixture at Penn Manor softball games for years; Brittany was a four-year starter and all-state performer, and Tori cracked the Comets’ starting lineup as a ninth-grader. The sisters were high school teammates for one season, much to the delight of their parents.

But the family's world was turned upside down on Feb. 3.

“I got back to the locker room after practice and I had a missed call on my phone,” Brittany Hook said. “I was about to call my mom and then my dad called me. He didn't sound like himself, and he told me what happened. I just remember falling to my knees and instantly crying. A wave of emotion came over me.”

Unable to get on the road home until Feb. 5, Hook remained at USF and pitched in the game against Team USA.

“I didn’t sleep the whole night before,” she said. “My mom was excited for me to play against Team USA, and I knew she’d want me to play.”

Her life forever changed, Hook departed Florida the next day. And now, still mourning the death of her mom, and back with her family in Willow Street after her season was canceled because of the COVID-19 pandemic, Hook is taking it one day at a time.

“I feel like my life is on pause,” she said.

Ditto for sister Tori, a rising senior slugger and all-star third baseman for Penn Manor. She was working at Willow Valley on Feb. 3 when her supervisor summoned her to the office and told her she was needed at home for a family emergency.

“I was shaking the whole way home because I didn’t know what was going on,” Tori Hook said. “My dad took me into my room and told me that my mom had passed away. I just started crying.”

Like her sister's college campaign, Tori's season was also canceled. And this spring, perhaps more than ever, the Hook sisters could have used softball, first and foremost to honor their mom, and also to escape the real world for a little while, and take their frustrations out on the field.

Tori had planned to honor her mom this season by switching her Comets' jersey from her trusty No. 10 to No. 1. Melissa Hook had worn the No. 1 during her own softball days at Manheim Township, where she was an ace pitcher for the Blue Streaks. Instead, Tori will wear No. 1 next spring in her senior season for Penn Manor.

For her part, Brittany Hook got to continue her season for a little while this spring.

After spending nearly three weeks at home with her family, she went back to Florida and resumed her season in memorable fashion on Feb. 28. Slated to get an inning in relief for her season debut against Texas A&M-Corpus Christi, Hook was called into the game to protect a 1-run lead in the final frame.

What happened next was right out of a Hollywood script.

Hook fired three pitches, all for strikes, for the game-clinching strikeout in USF’s 5-4 victory. It was her first collegiate save, in her first game back in the circle since losing her mom.

“It felt different than other games,” Hook said. “I was definitely feeling the energy, but I was completely calm. Usually I’m nervous, but I felt calm and composed. The stadium was so loud when I came in, and I’ll never forget that. Everyone was cheering for me. I started tearing up, and I felt my mom was with me there the whole time. I had a feeling it was going to be a good outing; I wasn’t expecting a three-pitch strikeout, but it worked out that way.”

“It was my first save in college,” Hook said, “and I did it without my mom. Normally I would call her right away after a game, so it was different not being able to do that. But I knew she was smiling up there.”

Hook ended up pitching in five games for USF this spring, and she went 1-1 with a 2.05 ERA, along with that one magical save. She picked up her first college victory on March 4, going six innings in an 8-2 victory over Detroit Mercy in Tampa.

That outing, like every pitch in every single outing moving forward in her career, was for her mom.

“This has definitely changed my perspective on a lot of things,” Brittany Hook said. “Every day is truly a blessing because you never know what could happen. Life is definitely too short.”

Editor's note: This story will be updated throughout the day with the latest in COVID-19 information.

No Big 33 football game, but L-L League participants to be honored via virtual watch party

Editor's note: This article was originally published on June 11, 2020.

Tattoo — Noun: (1) a pattern, picture, legend, etc., made by the act or practice of marking the skin with indelible pigments; (2) a signal on …