And with Sunday, Nov. 28, designated as a legal hunting day, hunters across the state are gearing up now for a full weekend chasing whitetails.

Since the Pennsylvania Board of Game Commissioners early this year reinstated two weeks of concurrent deer hunting statewide, both bucks and does are legal game anywhere in Pennsylvania starting Nov. 27 and running through Dec. 11.

(Remember that Sunday, Dec. 5, is not an open hunting day for deer.)

For Adam Lenhard, 28, of Warwick Township, any hunting he might do during the Pennsylvania gun season will be for antlerless deer only.

That’s because this summer, he “won the lottery,” as the Conestoga Valley High School graduate puts it.

Lenhard, who works in sales for Kinsey’s Outdoors in Mount Joy, enjoyed “the best hunting of my life” during archery season in October when he participated in the annual archery deer hunt at Middle Creek Wildlife Management Area.

I’ve only ever talked to a couple hunters who have participated in this hunt since they revamped it in 2016.

Every hunter I’ve talked to basically told a story similar to Lenhard’s.

It costs nothing to enter the lottery and any licensed bowhunter is eligible.

If picked, you get permission to bowhunt for a full week on one of the best managed properties you’ll find in the state – public or private.

It has to be one of the best bowhunting opportunities available to the public anywhere in Pennsylvania.

But back to Lenhard.

He has hunted Lancaster County public land since he was 12, and had never tagged a Pennsylvania whitetail buck before this season.

Last summer, he decided to apply online for the annual Middle Creek bowhunt, which allows 48 hunters selected by lottery drawing to chase deer in the controlled-access area of the 6,000-acre property owned by the Game Commission on the Lancaster-Lebanon county line.

The controlled-access area is intensely managed for a variety of wildlife and is mostly off limits to the public.

Hunters are divided into groups of 14, and each group is given one week to hunt during the statewide, fall archery deer season.

Each hunter is assigned to one of five hunting zones, ranging in size from 154 to 327 acres.

Lenhard had heard about the Middle Creek bowhunt, but he had never applied to participate before this year.

So he was pleasantly surprised when he received a packet in the mail in August informing him he’d been picked to hunt the very first time he applied.

Lauren Ferreri, the Middle Creek manager, said 906 hunters applied for this year’s hunt, which is on par with recent years.

Lenhard really went nuts when he read further that he’d also won the right to hunt for both antlered and antlerless deer.

“I was screaming like crazy, and my wife said, ‘What’s wrong with you?’” he said. “I told her I literally just won the lottery.”

Lenhard has spent enough time during his life driving through Middle Creek and fishing the lake that he knows the caliber of bucks the managed area holds.

“There are some monsters in there,” he said. “I’ve seen them.”

In September, Lenhard attended the mandatory orientation meeting at the Middle Creek Visitor’s Center, where he learned all the rules and met the Game Commission officials he’d encounter during the hunt.

In accordance with the rules, he was allowed to scout on Sunday, Oct. 10, ahead of his hunting time from Oct. 16-23.

Lenhard spent eight hours with his dad, Dave Lenhard, exploring the 291 acres of Zone 1 he was assigned to hunt.

He hung six trail cameras – five cellular – and three sets of climbing sticks he planned to use with his tree saddle.

“I had done quite a bit of aerial scouting with maps before we went, so I had some places in mind I wanted to check out,” he said.

“But when we got in there, it was way thicker than I thought, and there was deer sign everywhere. I’ve never seen so much deer sign.”

During the week between his scouting day and his hunt, Lenhard’s cell cameras fired to his phone picture after picture of awesome bucks. 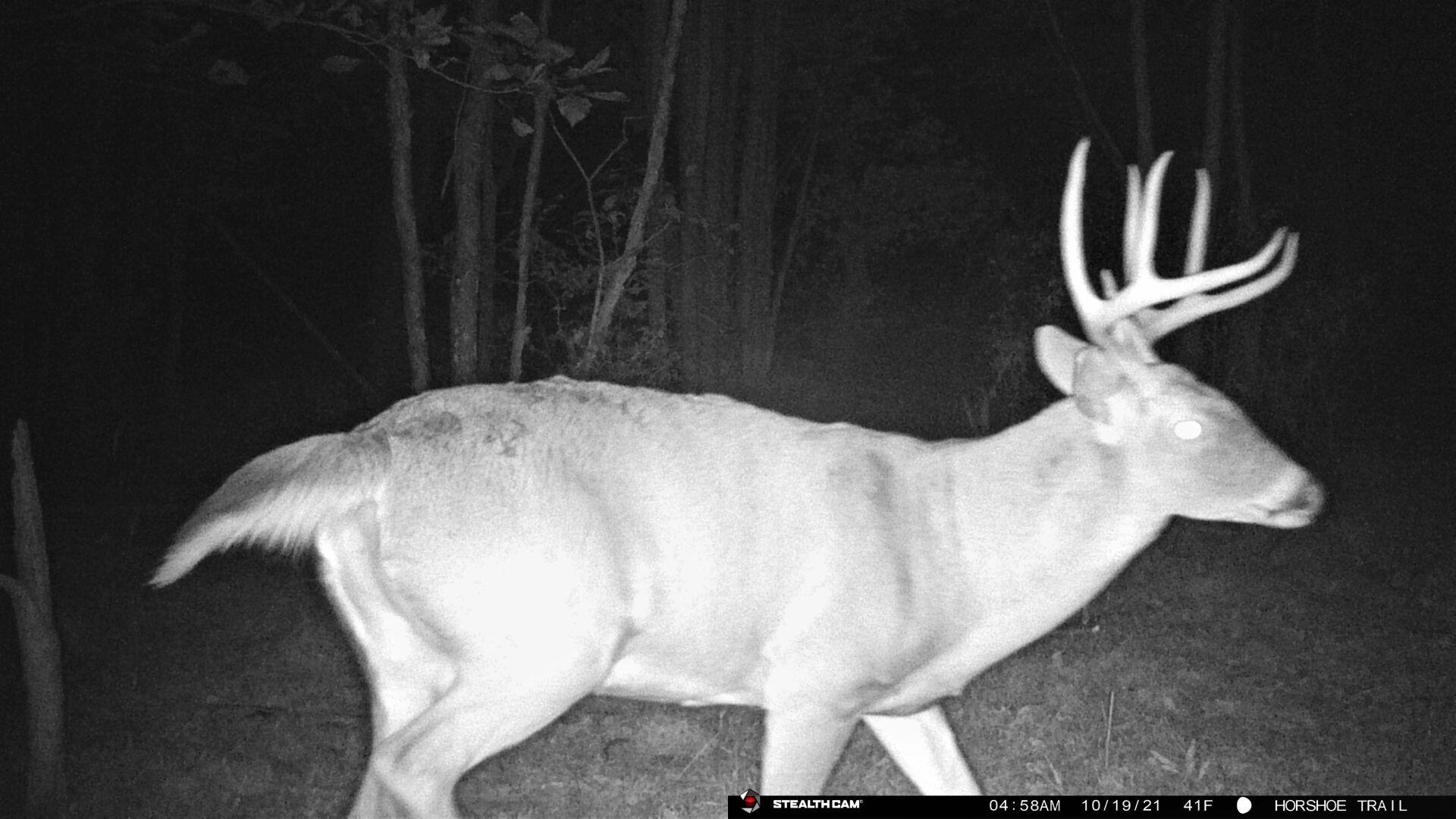 Eager to expend as much effort as possible during his designated time at Middle Creek, Lenhard cashed in a week’s vacation for it.

Oct. 16 finally arrived, and when Lenhard showed up to hunt, the first thing he saw in his headlights as he drove to his parking area was a solid, 130-class eight-point buck standing next to the road with a group of does.

“I hadn’t even started hunting yet, and here was a buck I could only dream of,” he said.

Though he wouldn’t know it until the end of the week, Lenhard had his 291-acre zone all to himself for his hunt. The three other hunters assigned to hunt the zone with him never showed up that week, which, surprisingly, isn’t uncommon, according to Middle Creek officials.

Lenhard had a buck tag, plus three doe tags he could use at Middle Creek. Every time he saw a doe, though, he thought how shooting it might wreck his chances at a buck.

He hunted every morning and evening, only coming out of the woods at midday for a quick lunch.

“I counted them all, and I saw 65 deer during my week,” he said. “That’s by far the best deer hunting I’ve ever had in my life.”

The hunt also afforded Lenhard some new experiences with deer. For instance, he had never before called in a buck with a deer call.

“I’ve used deer calls plenty of times in Lancaster County, but I never had anything respond,” he said.

That changed for him big time the evening of Oct. 22, when an eight-pointer he’d seen several times through the week showed up walking away from Lenhard’s position.

He grunted and the deer came running, but offered no shot.

As the buck walked away, Lenhard grunted again, and the deer came back.

The two played this game a couple more times before the buck apparently figured out something was wrong and seemed to be intent on leaving.

Lenhard hit him with a snort-wheeze, though, and the buck just couldn’t stand that challenge.

He returned, entered one of Lenhard’s shooting lanes and a perfectly placed arrow netted Lenhard his first Pennsylvania buck.

“I had told myself that Friday night I was going to take this buck if he showed up,” Lenhard said. “I know there are bigger ones out there, but I felt like it was time to punch my PA buck tag.”

Lenhard lauded the Game Commission both for offering the Middle Creek bowhunt to the public and for the way the hunt was organized.

Everything about the experience from start to finish was “professionally run and you could tell they wanted us to have a good time and have every chance to be successful,” he said.

Hunters can apply for the annual Middle Creek hunt in July. The application can be found at that time on the huntfish.pa.gov site by accessing your profile and then clicking on “Buy Applications.”

Tell us your most cherished hunting tradition [form]

The 2021 firearms season for antlered deer in Pennsylvania starts Saturday.

Public use of the outdoors in Lancaster County has never been in such demand and now there is another option for exploring its waterways.