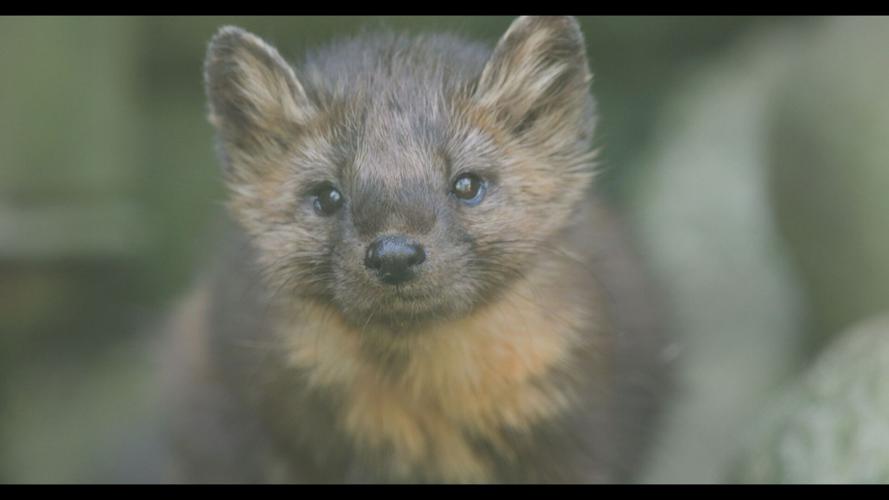 The American marten, once found in Pennsylvania, may be ready for a comeback. 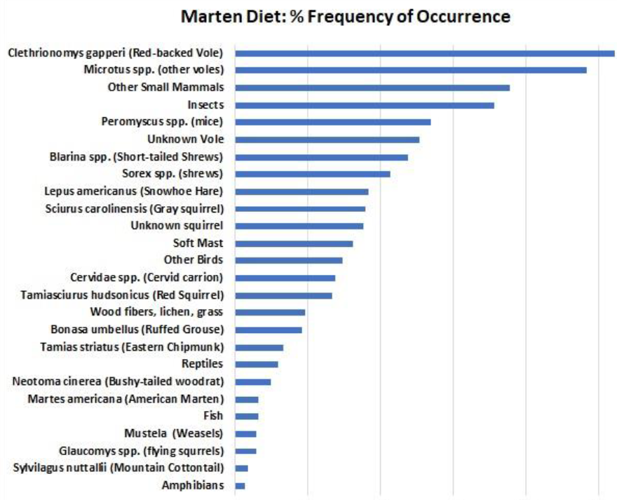 A graphic from the Pennsylvania Game Commission detailing what American martens eat.

Now, it may be the turn for one last iconic species we drove away: the American marten, a cat-size furry predator in the weasel family that spends a lot of time in the treetops of mature forests and rummaging under logs and snow.

Twenty years after a study first called for the marten, formerly known as the pine marten, to be reintroduced in the state, the Pennsylvania Game Commission may be ready to give it a try.

An extensive high-tech survey of available habitat around the state and consultation with biologists in seven other northern and Midwestern states where the furbearer has been successfully restored led to this conclusion: This icon of wilderness and big woods can again roam the wooded mountains of north-central and northwestern Pennsylvania.

After evaluating a 42-page feasibility assessment on reintroducing the marten, the Pennsylvania Game Commissioners recently gave the go-ahead for staff to prepare a relocation and management plan for the project and field comments and concerns from the public.

To read the fascinating full feasibility study, go to the commission's website here.

No martens would be released into the state unless the Game Commission gives final approval, likely at its September 2023 meeting.

If that happens, martens would be live-trapped in other states and Canada and released in places where Pennsylvania has the largest tracts of fairly contiguous mature forests. Think the vast public forests in northern tier counties, the PA Wilds region, Allegheny National Forest and perhaps a few larger game lands in northeastern Pennsylvania in Luzerne, Columbia, Sullivan and Wyoming counties.

The Poconos and Laurel Highlands are not being considered as ideal habitat, nor is the Delaware Water Gap National Recreation Area because of forest fragmentation.

No threat to game

Let’s get this out of the way up front: The small predators, though adept hunters, do not pose threats to game species, especially grouse and turkeys, whose populations have been on the downswing in recent years.

In fact, extensive diet surveys done on martens in other states reveal that, by far, the main food on the menu — 68% — are voles, mice, shrews and other small mammals. Insects, plants, carrion, fish, amphibians, reptiles and occasionally another marten account for most of the other food sources.

Research by the Western Pennsylvania Conservancy found that those sources of food are abundant in the proposed release areas. Not to mention the thousands of deer carcasses that remain in the woods after hunting seasons.

No turkeys were found in the stomachs of martens in various research studies and only rarely a grouse.

And since they eschew open areas and humans, martens would not be preying on backyard chickens, says Tom Keller, the Game Commission’s furbearer biologist, noting a repeated concern he has fielded.

A poll of 1,047 by a Penn State research arm found that 92% were in favor of reintroducing martens. Hunters surveyed also showed strong approval.

The marten’s treetop-climbing abilities and under-snow habits should help it avoid being eaten by larger predators such as bobcats, coyotes, fishers, weasels and foxes. Great-horned owls, eagles and northern goshawks sometimes snatch a marten.

Until the early 1900s, martens were found in northern counties in Pennsylvania. A combination of logging our vast forests and unmitigated trapping sent them on a downward spiral.

About the size of a mink but smaller than a fisher, they had a prized pelt that in value was second only to beavers for a time. Another name for martens is the American sable.

Weighing 1 to 3 pounds and about 19 to 27 inches long from nose to tip of tail, they have dense brownish-black hair. An orange-yellow bib covers the throat. They have large feet to help them walk on snow and short legs so they can crawl into crevices and tree cavities where they hunt and den. A pointy snout and long whiskers aid hunting in tight spaces such as tree cavities and a dense forest understory.

The last stray records of martens were in the 1920s. Occasional martens that have turned up since then, like three in the 1950s and 1960s in Potter and Wayne counties, and a skull collected in 1970 in Mercer County, are believed to be stragglers that roamed into the state from other northern states.

States that have had successful reintroductions of martens include the Adirondack region of New York, Vermont, Maine, Wisconsin, Michigan and New Hampshire.

A 2002 study by the Pennsylvania Wild Resource Conservation Fund recommended the Game Commission embark on marten restoration. But the agency at the time said not enough was known about suitable habitat to establish a viable population.

There are indeed large enough forested areas with a needed mix of conifers and mature deciduous trees for martens to call home, Keller says.

Snow cover is important for martens, both for hunting under it and for protection from predators. Though less snow is expected across Pennsylvania because of climate change, it is believed the north-central and northwest areas of the state being eyed for martens will receive adequate lake-effect snow from the Great Lakes even as temperatures warm.

Martens were important animals in the cultures of many Native Americans, who developed legends and stories around the predator.

Though not a goal for reintroduction, a limited trapping season might be allowed, as it has with otters and fishers, if martens become firmly established in Pennsylvania, Keller says.

Why bring back the marten?

The feasibility study talks about restoring “a missing piece to the ecosystem,” a boost to wildlife-watching tourism and the martens’ cultural significance to Native Americans. And martens can be an important means of dispersing the seeds of native plants throughout forests.

Maintaining good forest habitat for martens would benefit other mammals and birds that get less attention, Keller notes.

“When we have martens, we know we have a healthy forest,” he says.

This is perhaps the last iconic species that can return to Pennsylvania. A project to restore bobwhite quail is just underway. It’s unlikely the public will ever tolerate the return of mountain lions or wolves. But the marten and the wildness it symbolizes should again have its place in Pennsylvania’s tapestry of wildlife.

Hitting the midpoint of the Appalachian trail, the easy way [column]

The Appalachian Trail spans 2,181 miles from Springer Mountain in Georgia to Mount Katahdin …

It’s been a decade since anyone has legally kept a fish caught on Speedwell Forge Lake.

Rail biking — pedaling a steel-wheeled platform on railroad tracks — is a new outdoors pastime sweeping the country, and two of the three plac…