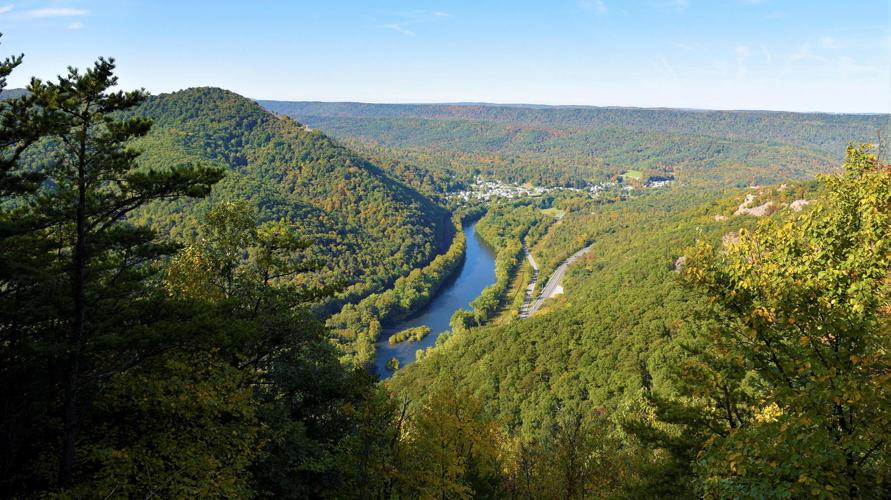 A view of Jacks Narrows and the Juniata River from an overlook near the summit of the Thousand Steps trail. 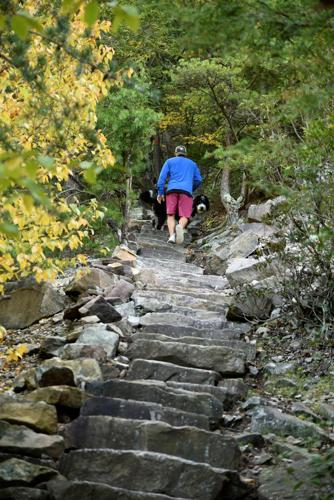 Jason Graney and his dog climb the unique and historic Thousand Steps trail in Huntingdon County. 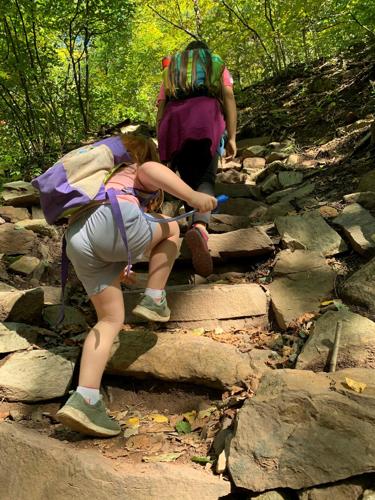 A family makes their way up the Thousand Steps trail, one of Pennsylvania’s most unique pathways.

A view of Jacks Narrows and the Juniata River from an overlook near the summit of the Thousand Steps trail.

Jason Graney and his dog climb the unique and historic Thousand Steps trail in Huntingdon County.

A family makes their way up the Thousand Steps trail, one of Pennsylvania’s most unique pathways.

MOUNT UNION — There comes a sobering point in most of our lives, I suspect, where you realize your body is slowing down and you really can’t do everything you might have a will to.

I found my nearly 70-year-old mind coming to terms with that reckoning lately as I prepared to climb the Thousand Steps trail, a ponderous staircase of rough stone slabs wedged into place 86 years ago by quarry miners as a way to get to work on the face of Jacks Mountain in Huntingdon County.

I had read that it’s a daunting climb as the stones are rough, angled and necessitate ungainly steps up. You ascend 843 feet of elevation in less than a half-mile. It’s been compared to a 90-minute workout on a StairMaster fitness machine.

There are more than 1,000 of those steps — various stories I read put the total of anywhere from 1,037 to 1,042 — by any stretch a rough haul. I was intimidated and nervous. My knees have not been happy with anything other than flat-line walking for a couple years and even going upstairs to bed is no longer effortless.

But this historic and unique trail, now the hallmark of the 84-mile Stepping Stone Trail on State Game Lands 112, has been on my bucket list for close to two decades. The more I read about its history, the more I felt drawn to experience this hardscrabble commute.

From 1936 until the late 1950s, quarry workers from nearby Mount Union used it to access talus slopes of gannister rock used to make silica heat-resistant fire bricks used heavily in the heyday of steel mills, glass factories and other industries. Mount Union, whose three brick plants once employed 2,000 people, still has signs calling itself “Brick Town USA.”

Imagine walking 3 miles or so from town to the base of Jacks Mountain and making that climb just to start a 12-hour work day busting and loading rocks. Six days a week.

In one sense, I felt climbing the steps was a way of honoring the sacrifice of the workers — many of them immigrants cast into a hard and remote land — who did what had to be done to support their families.

And, the photos I’d seen of the views on top were amazing. The mountain looks across to mountain ridges and down on Jacks Narrows where the Juniata River is pinched between two mountains. Here, modes of transportation have been shunted through the gap, from the Frankstown Indian Path to the Pennsylvania Canal to the Pennsylvania Railroad and the current Route 22.

From top to bottom, the 2,321-foot Jacks Mountain has the highest elevation gain than any mountain in Pennsylvania.

More people are seeking out the Thousand Steps trail than ever before. Trail count cameras showed more than 42,000 people at least starting up the trail in 2020 — more than double the previous pre-pandemic year.

So I was determined to do the trail. I intentionally went by myself so I could stop as often as my knees ordered and not be a drag on anyone else. I packed my two trekking poles to shift some of the muscling up burden to my arms.

On a glorious fall morning in early October with fog clinging to the river bottom, I started up the limestone steps that had borne so many work boots.

Someone has marked each 100 steps on the way. Initially, I was annoyed at the intrusion but I came to view them as needed landmarks of accomplishment and subtle entreaties to keep going.

My internal hype of the task at hand as a gauntlet received a reality check when the first person I encountered was Jason Graney, 46, who was gliding up the steps cheerily with his dog. A resident of nearby Mount Union, he said he climbed the steps several times a week to stay fit.

His father had worked in one of the Mount Union brick factories. Though he never had to pulverize rocks with 16-pound sledge hammers on the mountain, Graney can relate to his dad’s fellow workers who did.

“I’ve often thought, boy, what would it be like to climb up this mountain and then have to bust rocks all day, just to get them over to the brick yard. It’s crazy stuff,” he said.

A couple hundred steps and rest breaks later, Zach Irwin, 38, came huffing up the incline. An Army veteran stationed at Fort Bragg, North Carolina, he was visiting his mom in Mount Union, who had urged him to experience the Thousand Steps. Irwin did not seem to be overflowing with motherly affection.

I couldn’t help but feel slightly vindicated about half way up when two women came up the steps, paused for a spell but started back down.

But then, here came Jessica Tenley, a 35-year-old mother with all six of her kids, ages 3 to 15, in tow. This was her seventh annual family trek up the mountain to see the autumn foliage and the views.

The first time, she was pregnant and brought her 1-year-old daughter, whom she lifted onto the bigger steps.

I chuckled to myself, impressed and admiring of their commitment to get outdoors at a sublime time of year.

As I started down the slope one ginger step at a time, thighs already burning, I felt my own gratitude that I can still go to inspiring places I want to. Hobbled or not.

• Ad Crable is an LNP | LancasterOnline outdoors writer. Email him at acrable@lnpnews.com.

Pennsylvania’s newest state park may be in York County, but Lancaster County residents have …

The unfortunately named Allegheny woodrat, a fascinating rodent, one of the most threatened animals in Pennsylvania and the focus of a new res…

For decades, Pennsylvania celebrated “hunting Monday” on the first Monday after Thanksgiving as the statewide firearms deer season opened.

With booming business in Marietta and Columbia, river trails prove to be a boon

In the old riverfront towns of Marietta and Columbia, you don’t have to wait long these days to spot a vehicle laden with a bike or kayak, qui…