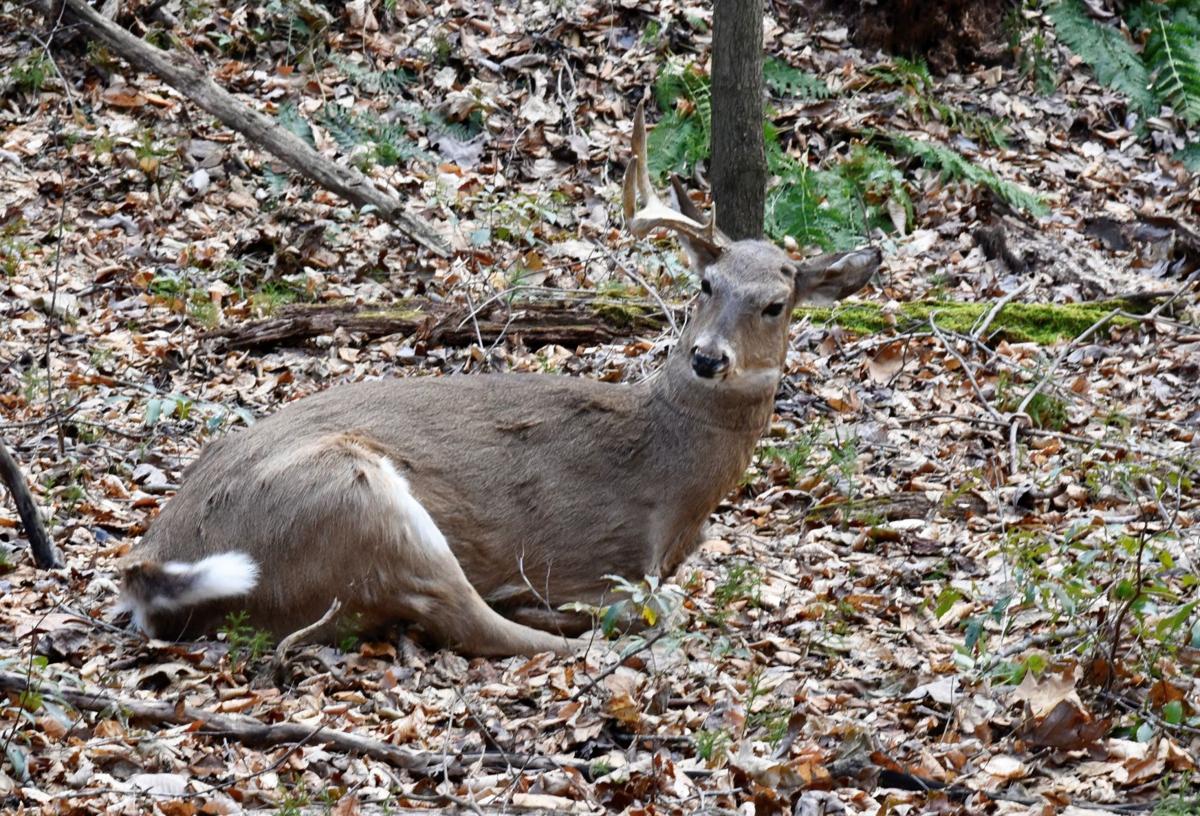 A "robo deer" decoy of a bedded buck sits in woods near a road near Middle Creek Wildlife Management Area shortly before it was shot by a hunter illegally road hunting. 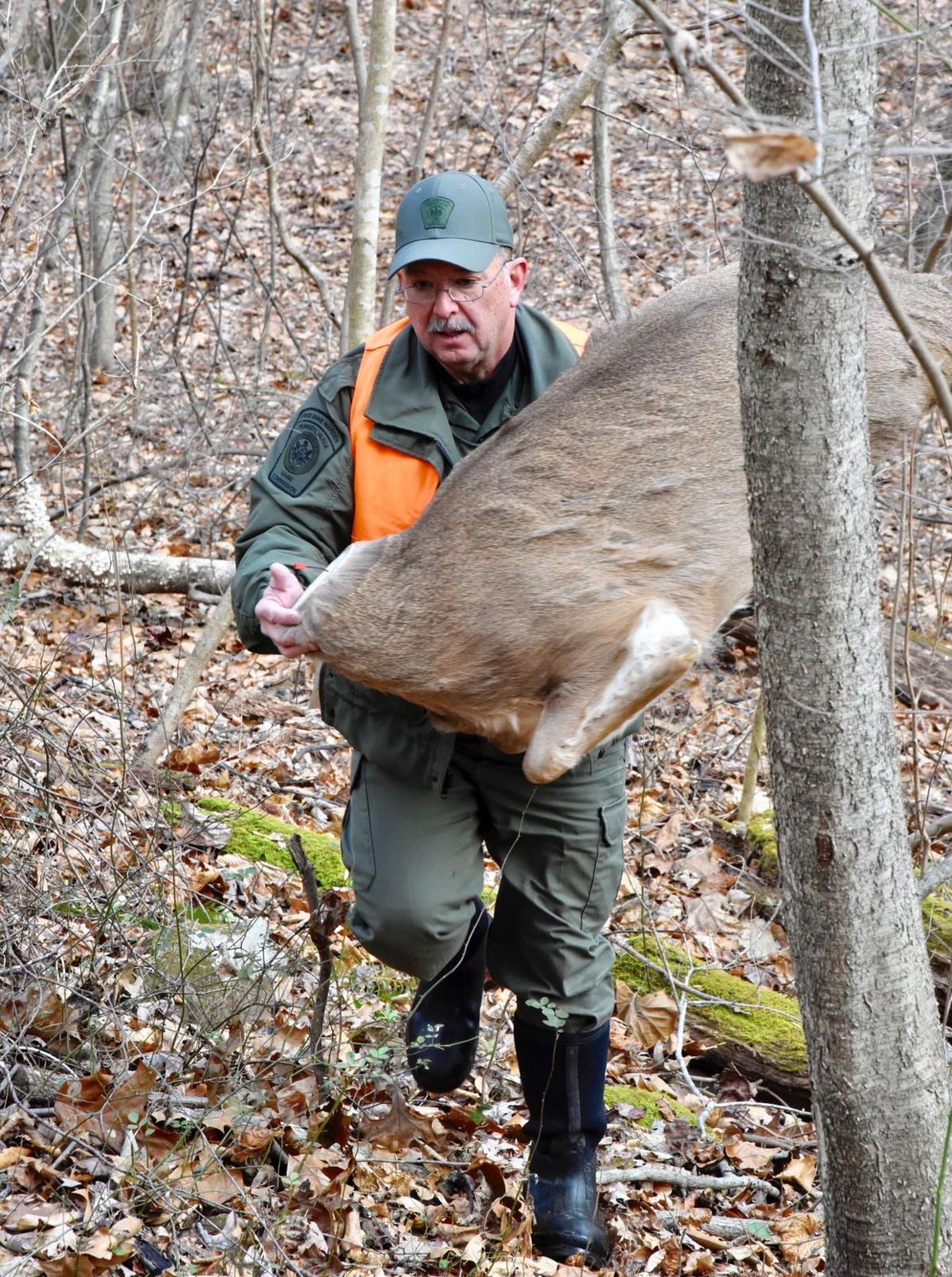 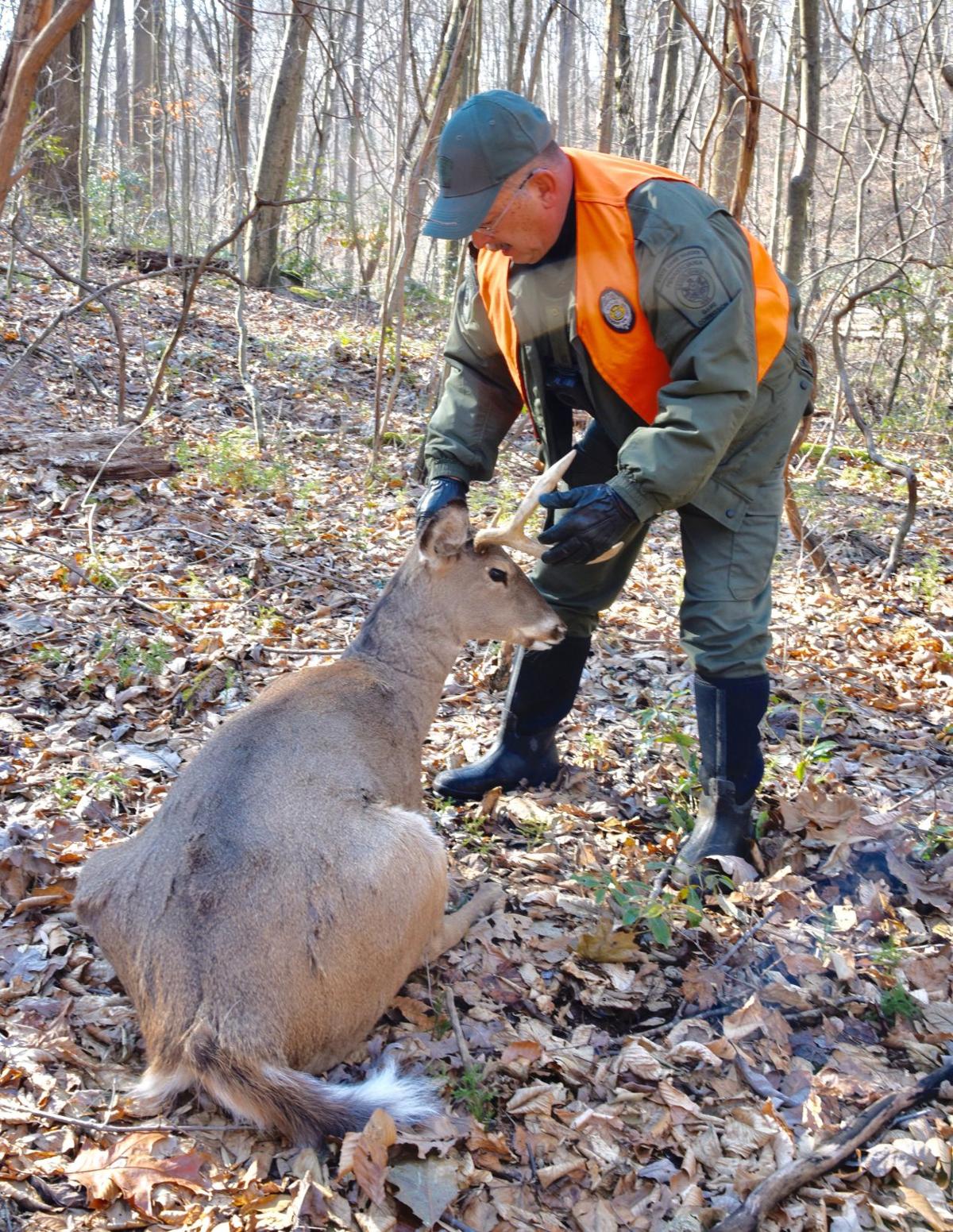 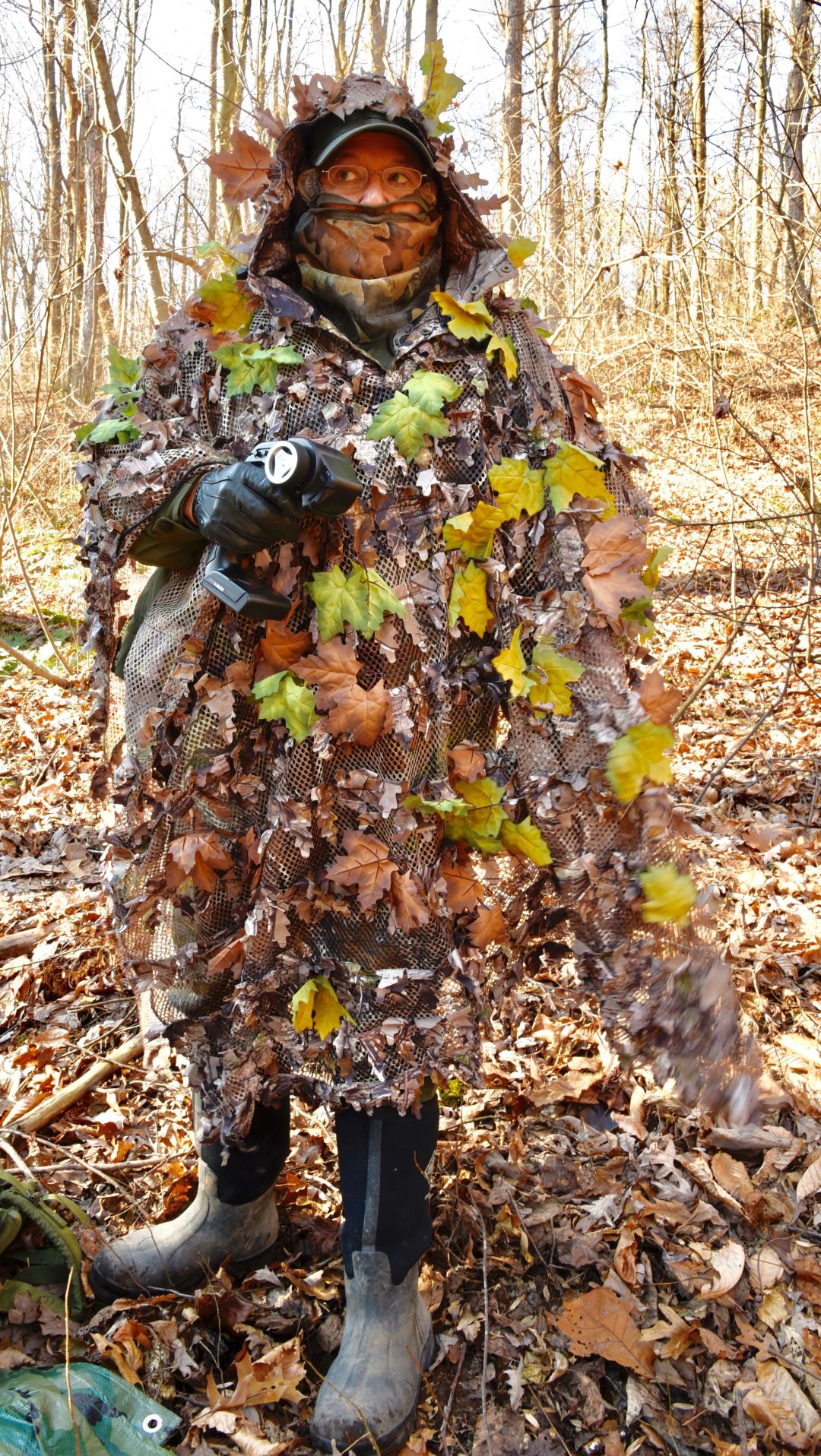 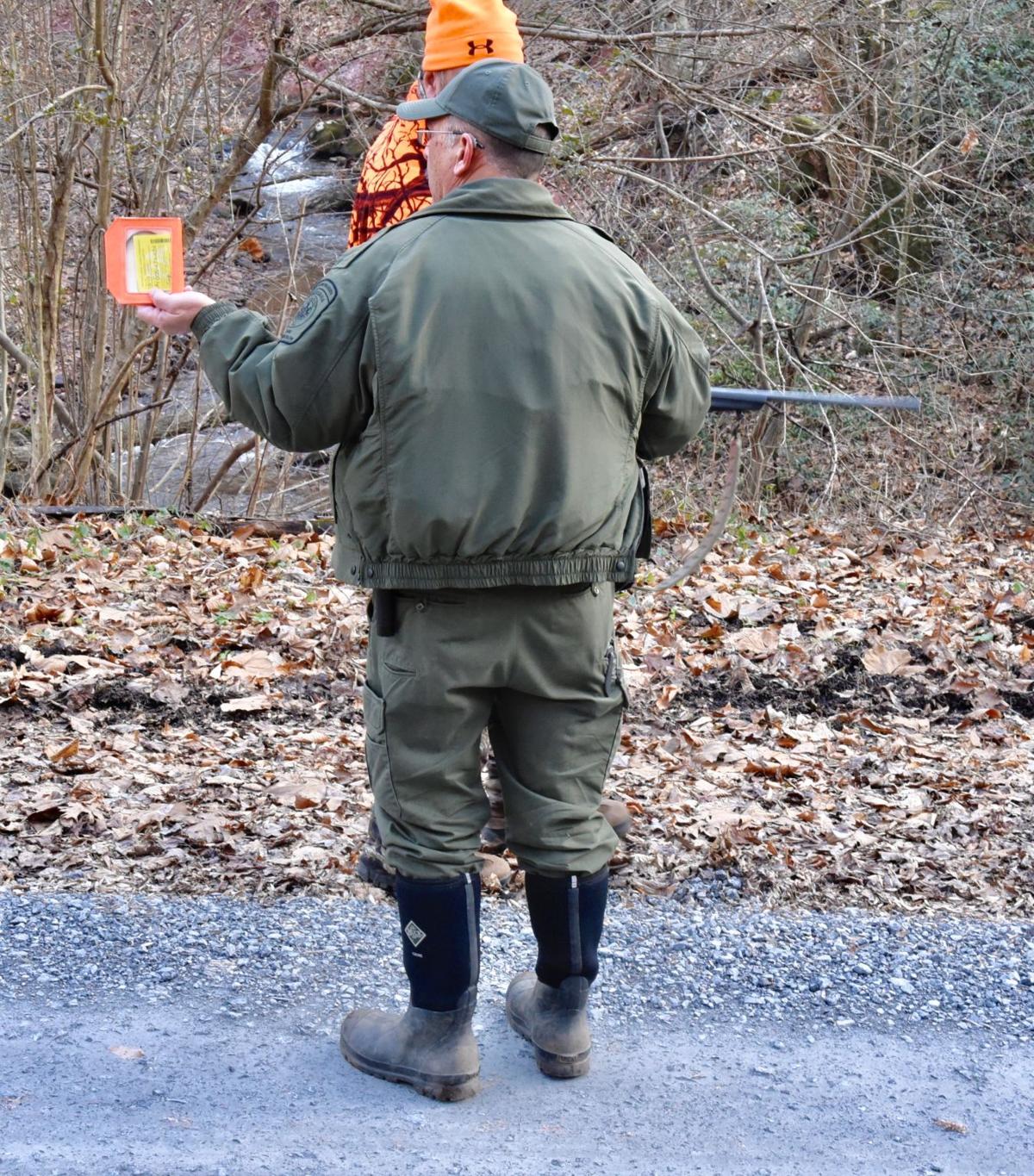 Game Warden Greg Graham checks the hunting license of a hunter after the man shot what turned out to be a robotic deer decoy from a road near Middle Creek Wildlife Management Area. 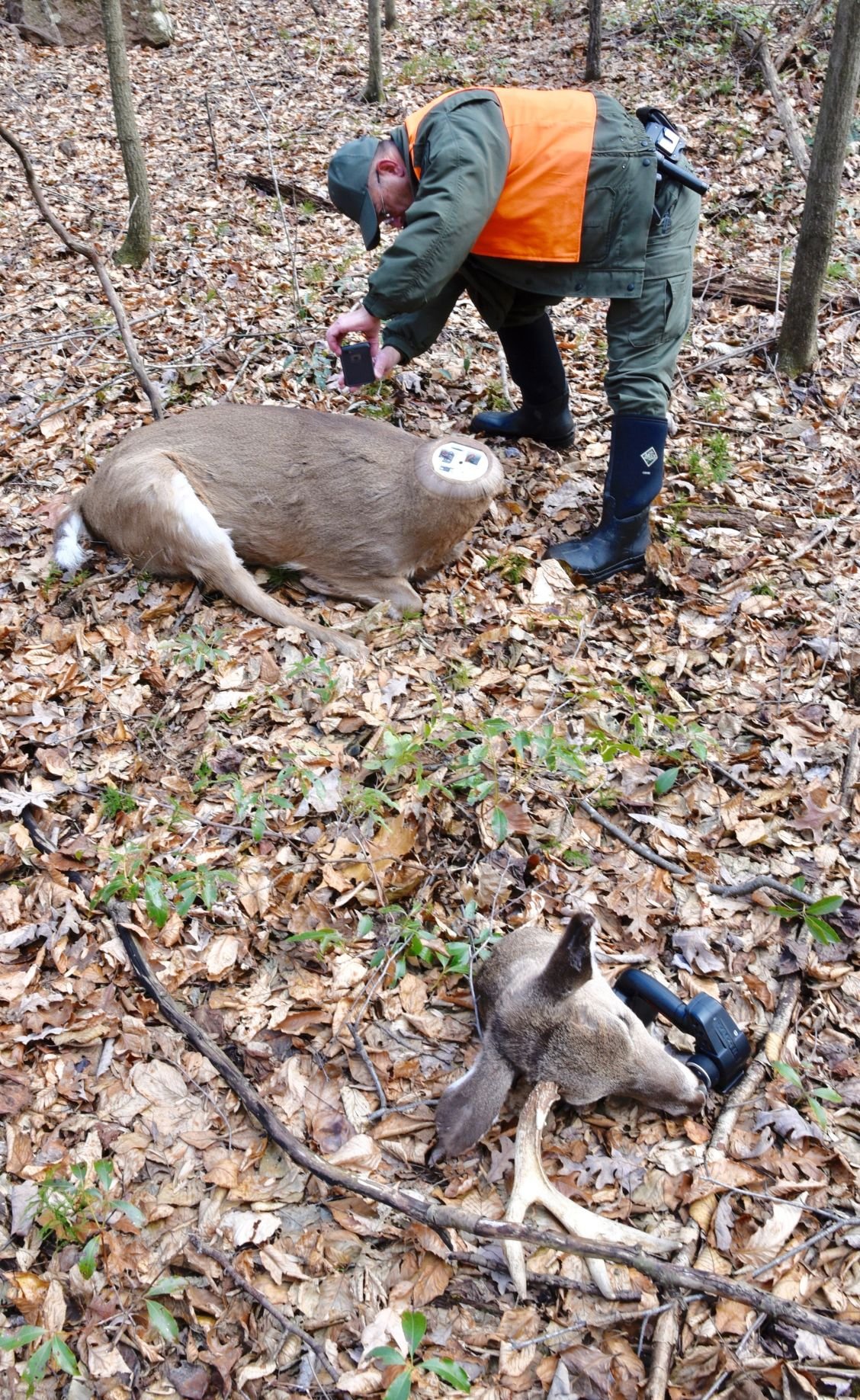 A "robo deer" decoy of a bedded buck sits in woods near a road near Middle Creek Wildlife Management Area shortly before it was shot by a hunter illegally road hunting.

It’s shortly after noon on the last day of the regular firearms season in Lancaster County, a time when a hunter begins to feel time is running out.

The vehicle stops, then backs up a few feet.

Graham knows what the hunter is now looking at — a completely realistic taxidermy-built buck deer bedded down in the leaves and mountain laurel about 40 yards off the road in the woods.

Graham nudges a joystick and, amazingly, the buck moves its head adorned with three-point antlers on one side. For good measure, Graham has the whitetail twitch its white and brown tail.

The car drives on. But a few minutes later, an orange-clad hunter with a rifle slung over his shoulder comes walking up the road.

The man stops, peers and aims while standing in the road.

Boom! The high-powered shot echoes through the ravine. The hunter’s aim is dead-on, but the deer doesn’t flinch.

Before the puzzled hunter can get off another shot, Graham unpeels himself out of a full-body camouflage Ghillie suit, jumps from behind a tree on the opposite hillside and barks, “State officer. Don’t shoot again! Unload your gun!”

Within a minute, an SUV pulls up carrying reinforcements in Haines Henry, a deputy game warden, and Jeffrey Schmidt, a Lancaster County waterways conservation officer with the Pennsylvania Fish and Boat Commission.

The county’s first successful use of a “robo deer” decoy has just gone down.

For the last couple years, Graham and other game wardens in the region have had two of the mechanized deer decoys at their disposal. The other is a standing eight-point buck.

One was purchased by the Federated Sportsmen of Lancaster County and the other by the Quality Deer Management Association. The decoys cost about $1,800 each.

Graham has previously used the decoys as part of a handful of sting operations to try to catch road hunters and nighttime poachers.

This was the first successful bust.

“The whole problem of poaching is we don’t have a clue how much of it goes on,” Graham says. “This is a tool to bring those violators to justice. I’m speaking for the deer who are killed unlawfully."

Around the state, the decoys have been helpful in curbing road hunting, says Randy Shoup, the Game Commission’s Bureau of Wildlife Protection director.

“Road hunting violates the principle of fair chase and is very often an unsafe act. Unfortunately, road hunting is all too common, and a strategically placed decoy puts the warden, the ‘wildlife’ and the road hunter or nighttime poacher at the same place at the same time, which often results in violations.”

The antlers can be swapped out on Graham’s two decoys. He might use an especially large rack to try to catch a poacher who he knows is only gunning for trophy deer.

To protect against being accused of entrapment, the deer decoys are not placed in open fields. Graham had purposefully placed the deer well off the road in woods where it would only be seen by someone looking intently for it.

The nabbed hunter, from Leola, is remorseful not to mention feeling stupid for shooting a foam and hair dummy.

“He said he should have known better,” Henry says.

The hunter committed two wildlife violations: using a motor vehicle to hunt deer and shooting from a roadway. Each carries a fine of $150 to $300.

Graham wants to interview the hunter to “get a feel for the type of person he is.” He doesn’t know if he will level both charges against him.

Judging from his shame after being caught, Graham doubts he will recommend to a district justice that the hunter’s license be revoked for a year. The hunter had told game wardens that he “lives for” deer hunting each year.

He will, however, be assessed a $200 charge for repairing the robo deer. Fortunately, the bullet missed the electronics that enable the decoy’s head and tail to move.

A little glue and deer hair and robo deer will be ready to hit the woods to try to ensnare those who don’t play by the rules of fair chase or the law.

More on hunting and deer in Pennsylvania:

Where have all of Pennsylvania's small-game hunters gone?

The news events that impacted Lancaster County, its communities and its residents in 2018 runs the gamut from joyful and hopeful to heart-wren…

In another case of a local wildlife rescue gone astray, the Pennsylvania Game Commission is considering fining a York County man who took home…

Update 10:15 a.m. — The elusive black bear of Lancaster city has finally been caught.