Two weeks ago, I asked in this column for hunters to share with me their feelings about the use of enclosed hunting blinds for deer hunting.

I’ve noticed more of these shooting houses – often equipped with windows, a door, insulation and a heater - dotting the places across Pennsylvania where deer hunters would likely set up, as well as a proliferation of businesses right here in Lancaster County selling the structures.

I expressed my own view of these shooting houses, which basically is that I’m not a fan because they separate me from the natural world I’m trying to experience through deer hunting.

I prefer traditional tree stands that offer full exposure to the woods and weather, and all they have to offer during my hunts.

The discussion apparently struck a chord, because that article was one of the most read on LNP’s site over a three-day period, and I received dozens of comments from hunters.

For the most part, those comments fell into two camps. First, there were those who agreed with my thoughts. Second, there were older hunters who promised that I will one day be grateful such blinds exist.

Rick Goodhart’s father, Dick, hunted without a blind all his life until he hit the age of 84.

“The blind allowed him to get a few more ‘first days’ in the woods,” Rick Goodhart wrote. “His last year, he didn’t even take his rifle because he wasn’t sure he could hold it up properly to get a good shot, but he still went out.

“He went until he was 87, two years before he passed away. Sometimes, circumstances dictate how you approach hunting. Thanks for the article, it gave me a chance to think about my dad heading out to enjoy his day.” 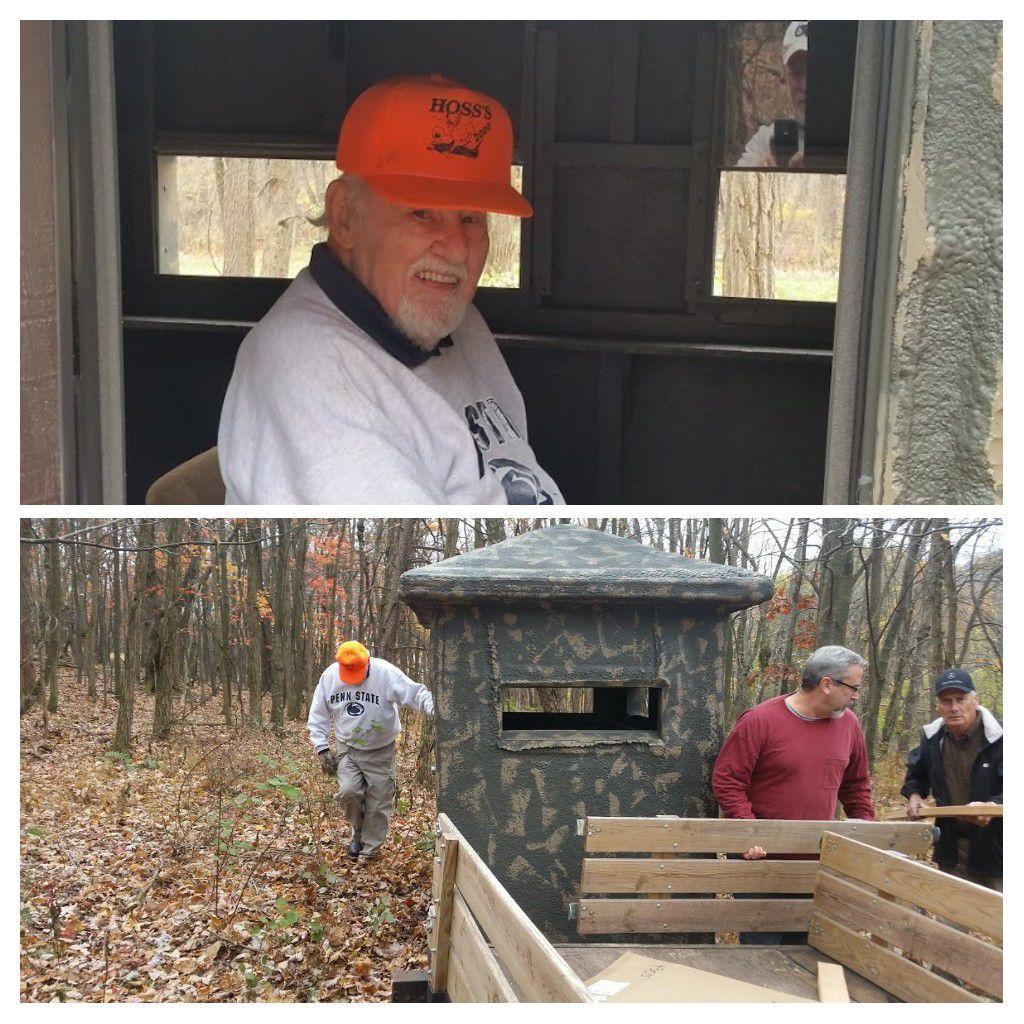 Stevie Thomas wrote about his adult son, who suffered a series of serious physical injuries, and who is now unable to climb into conventional tree stands.

Thomas expects to put up an enclosed blind so his son can continue hunting.

“I said all of that to say to anyone that is healthy enough to hunt from a stand, just do it,” he wrote. “The time may come when you can’t.”

Dave Clark wrote that, without an enclosed blind, he might not go out hunting at all, which would separate him even further from nature than sitting in a shooting house.

“It’s not about detaching from nature,” he said. “It’s just the opposite. It’s being able to sit out there in nature no matter the conditions for a longer time.

“Unfortunately, the older I get, the more comfort I want. I’m not able to withstand the elements the way I used to.”

Robert Steinruck agrees “there is no substitute for hunting in the open woods, away from the confines of a shelter,” he wrote.

“The sounds, sights, smells of the open woodland cannot be duplicated.”

However, Steinruck noted that after 60 years of hunting his favorite spot, exposed to the elements, “there came a time when the body didn’t handle this very well,” and he became concerned about climbing and descending a ladder.

“So, with the help of younger friends, I constructed a blind that has huge windows on four sides and a roof that does the obvious,” he wrote. “Now, at 81, I can still walk the ¾ of a mile to my favorite spot, just outside the hemlocks and 50 yards from my old stand, and, if I wish, climb into the blind to get out of the elements, safe from any climbing.

“With the sides open, I can still pretend I’m in the open woods. With age there comes some sacrifice.” 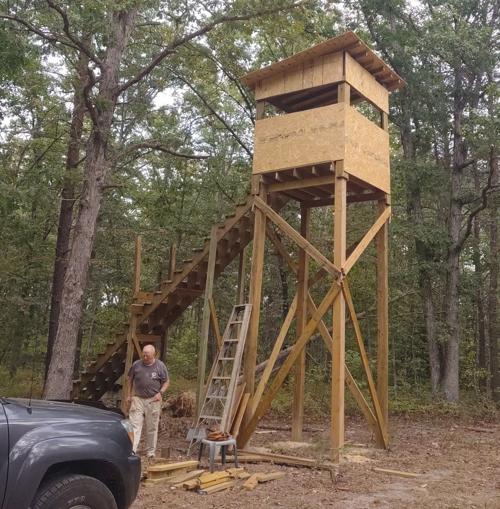 Jeff Wise has an enclosed blind, but he said he only hunts from it when it’s raining.

“I much prefer sitting in a stand and being able to see and hear,” he wrote. “The ground is even more exciting.”

“Anytime I have hunted from a box blind, I felt detached from what is going on around me, and I do not like the limited amount of my vision in my surroundings.”

Mike Herman is a public land bowhunter who takes “immense pride in getting off the beaten path and sitting through freezing elements,” he wrote.

“I cannot stand even sitting in a pop-up blind, much less an enclosed condo. But to each his own…In general, I attribute the increase in condos to general society looking for the easy way out.

“The fast results, no work type attitude that is becoming more prevalent. The old ‘tough times make tough men’ mantra. We are definitely in an easy time in life.”

Along with his comments, Herman emailed a photo of himself standing on a tree stand covered with snow. He said he sat for six hours in a blizzard that day before taking a monster buck with his bow.

“The thing I will always remember, cherish about that hunt is the complete cluster it took for me to come to full draw on a buck closing fast, clearing snow from pins and peep and fletch, having my release jaws froze shut and unable to get on the string – pure panic as the buck was closing in,” he wrote.

Thanks to all who sent me comments. I greatly enjoyed reading each and every one.

My opinion of shooting blinds remains the same as it was before I received all the feedback. I will continue hunting from traditional tree stands as long as I’m able.

When I am no longer able to do so, however, I will have no problem moving to a shooting house – provided I have a place to put one.

If I have to choose between not hunting deer and sitting in an enclosed blind, I’ll definitely take the blind.

Tending to a line on his fly rod, Shawn Coe crouched Friday morning on a stone-and-mud island surrounded by the shallow waters of Octoraro Cre…

In an online conference call, a panel of experts addressed the state’s Board of Game Commissioners Monday, speaking for hours about a deadly i…