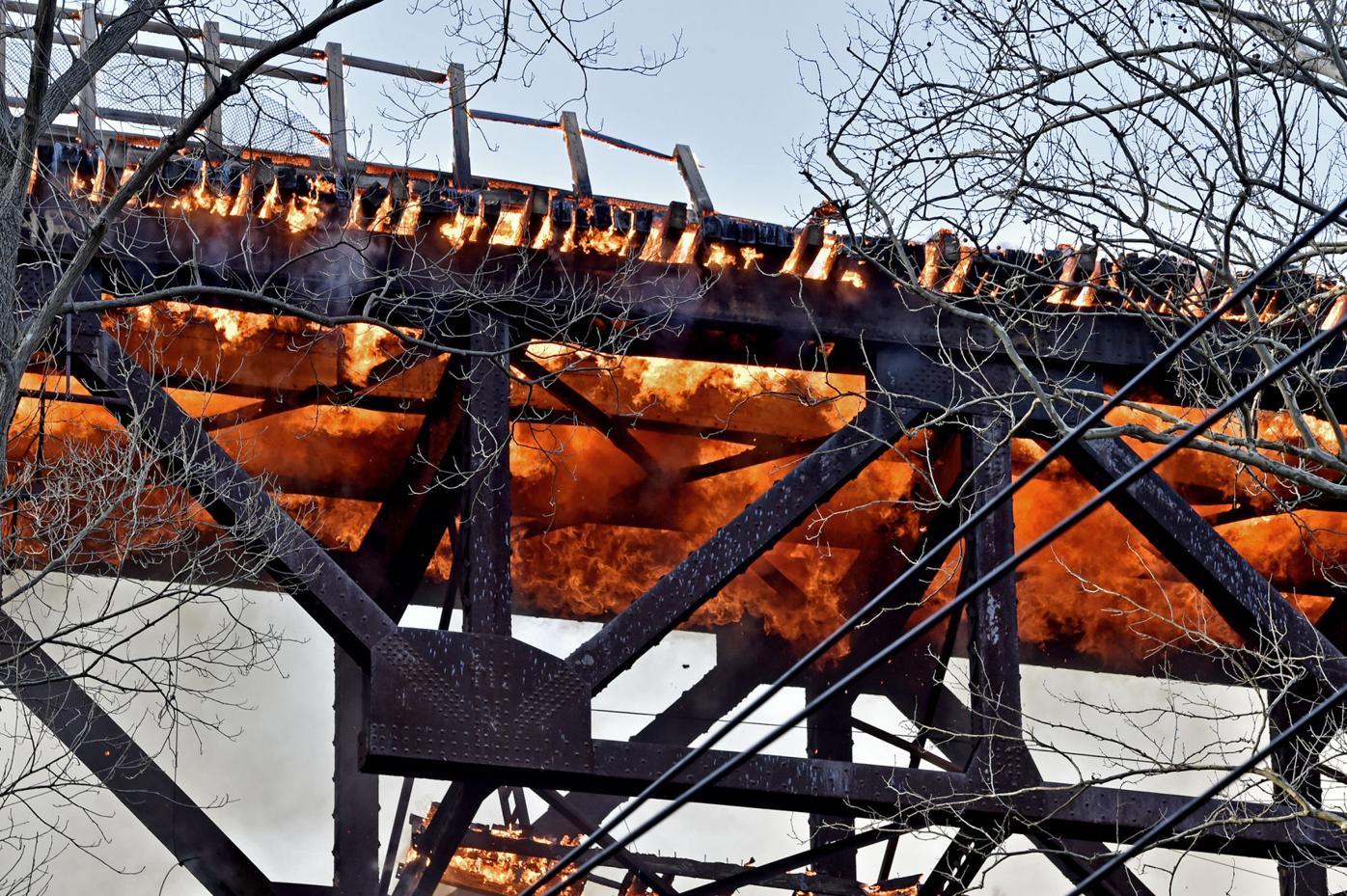 The Enola Low Grade Trail bridge over the Pequea Creek between Martic and Conestoga townships during the arson fire on April 12, 2018. 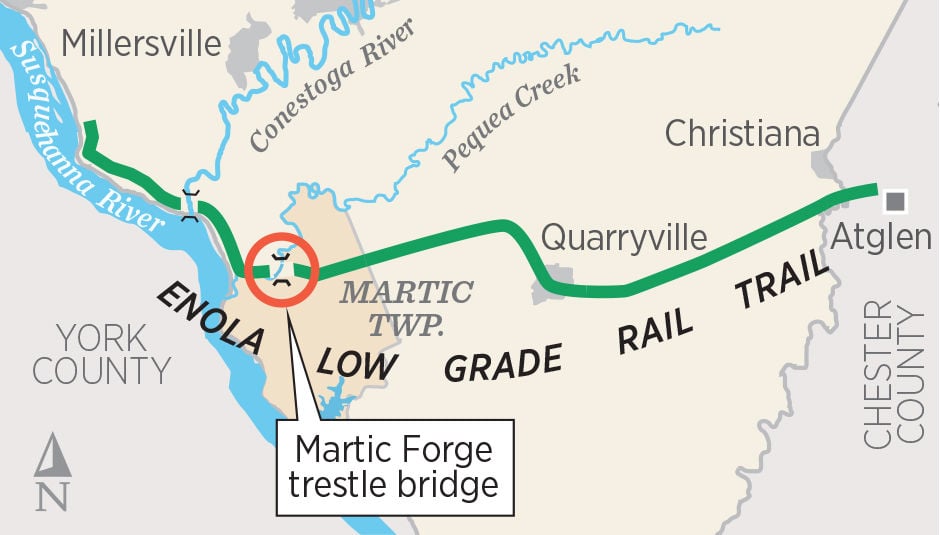 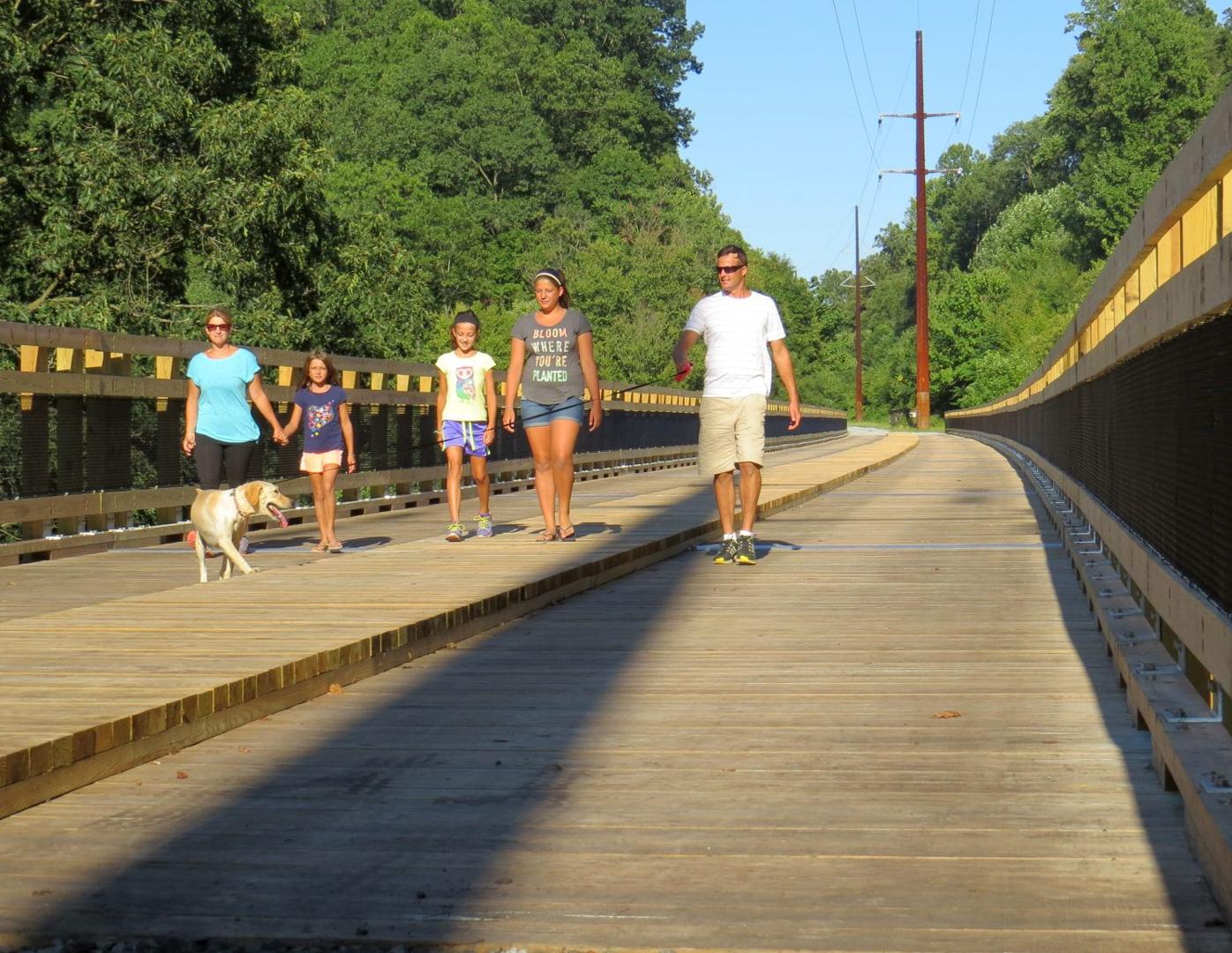 A family walks across the Martic Forge pedestrian bridge shortly after it opened in 2015.

The Enola Low Grade Trail bridge over the Pequea Creek between Martic and Conestoga townships during the arson fire on April 12, 2018.

A family walks across the Martic Forge pedestrian bridge shortly after it opened in 2015.

A multimillion-dollar effort to repair an arson-damaged bridge on a popular Lancaster County rail trail could begin as early as this year, with local officials now seeking contractors for work at the Martic Forge bridge.

It’s a project that may be possible due to a recently awarded $750,000 in state funding toward the work on the Enola Low Grade Trail in Conestoga and Martic townships.

Combined with earlier funding, those new grant dollars mean the townships now have about $3 million for the project. Still, they fear it might not be enough, citing the cost of building materials, which have risen since the start of the COVID-19 pandemic.

John Berry, Conestoga Township Supervisors’ chairman, agreed, pointing out that officials are trying to avoid spending any more than their current funding will cover.

“I think both townships were trying to do this without any burden to the taxpayers,” Berry said, aware that while popular with some local residents, others view the project as a “waste of money.”

Officials are hoping completion is possible in 2022.

The chairmen shared that perspective Tuesday, a day after Martic supervisors voted unanimously to seek bids from contractors willing to repair the bridge, which burned just over three years ago.

The former railroad trestle was converted into a pedestrian walkway in 2015, when a $750,000 project outfitted the century-old structure with a wooden deck that carried the trail over Pequea Creek to link the two townships.

Prior to that point, the trestle had been abandoned since 1988, and its revitalization was celebrated for filling a key gap in the Enola Low Grade Trail, which stretches nearly 29 miles in segments through a number of local communities between Chester County and the Susquehanna River.

Last week, local resident Jim Hearn remembered it fondly, recalling his first trips across the bridge, that boasted a height of 150 feet and a length of 634 feet.

“That timber-based deck, it was beautiful,” said Hearn, who leads the Martic Township Rail Trail Advisory Committee. “That view from up on that trestle was spectacular.”

But it was short-lived. In April 2018, an arsonist set the bridge ablaze and the entire wooden deck was lost to flames, according to local officials.

In May 2020, Maxxwell R. Redman Jr., then 20, of Columbia, was accused of starting the fire and charged with multiple felonies after witnesses and photos taken at the bridge placed him in the area shortly before the blaze ignited, authorities said.

Lydia Martin, another member of the trail advisory committee, remembers images of the burning bridge and described how ash rained down across the local landscape.

Soon after it burned, officials from both Conestoga and Martic townships vowed to rebuild.

Engineers at Wilson Consulting Group have since developed a plan to repair the bridge’s steel frame, which was warped in the fire, before installing a fireproof walking surface made up of concrete panels, Hearn said.

The bridge was insured, Hearn said. But a majority of the payout went toward dismantling and securing the burned bridge’s wreckage, he said.

“It was basically flapping in the breeze,” he said, describing the damaged structure. “It was a hell of a mess.”

And over the past three years, they’ve received multiple grants from the state departments of Conservation and Natural Resources and Community and Economic Development. That includes the recent $750,000 from DCED.

However, that doesn’t mean it’s a sure thing, said Sellers of Martic Township.

“If the bids come in over what we have in funding I would say that there is a good possibility the bid would be rejected,” he said, again citing the rising cost of building materials. “The risks are real.”

Still, the members of the trail advisory committee remain hopeful.

“I am incredibly optimistic,” Martin said, explaining the committee has been hard at work making other, smaller improvements like installing benches and tables with the help of local partners.

If a bid is accepted, Hearn guessed that construction on the project could begin late this year, possibly wrapping up sometime in 2022.

“This is considered a shovel-ready project,” he said, revealing that timeline is slightly behind what was originally expected.

“It’s been pushed out simply because of the lack of funding and the COVID virus has slowed everyone down,” Hearn said.

A finished bridge, Hearn said, would make the already-well-trafficked trail an even more popular destination, both for locals and out-of-town visitors.

“I think it's going to explode, and I think this is going to be a very popular place,” he said.

What's the deal with Hempfield's $20K contract for a 'CFOO suite'? [Lancaster Watchdog]

Paving over a 5,000-foot strip of the abandoned Route 23 relief highway, better known as the…

Richard Humphreys plans on walking 380 miles to the world's oldest camp for children with Type 1 diabetes.

Ryan Davis took a break, setting down his tools where he worked Friday morning on the grassy banks of a Manheim Township stream that cuts thro…

What's the deal with Hempfield's $20K contract for a 'CFOO suite'? [Lancaster Watchdog]