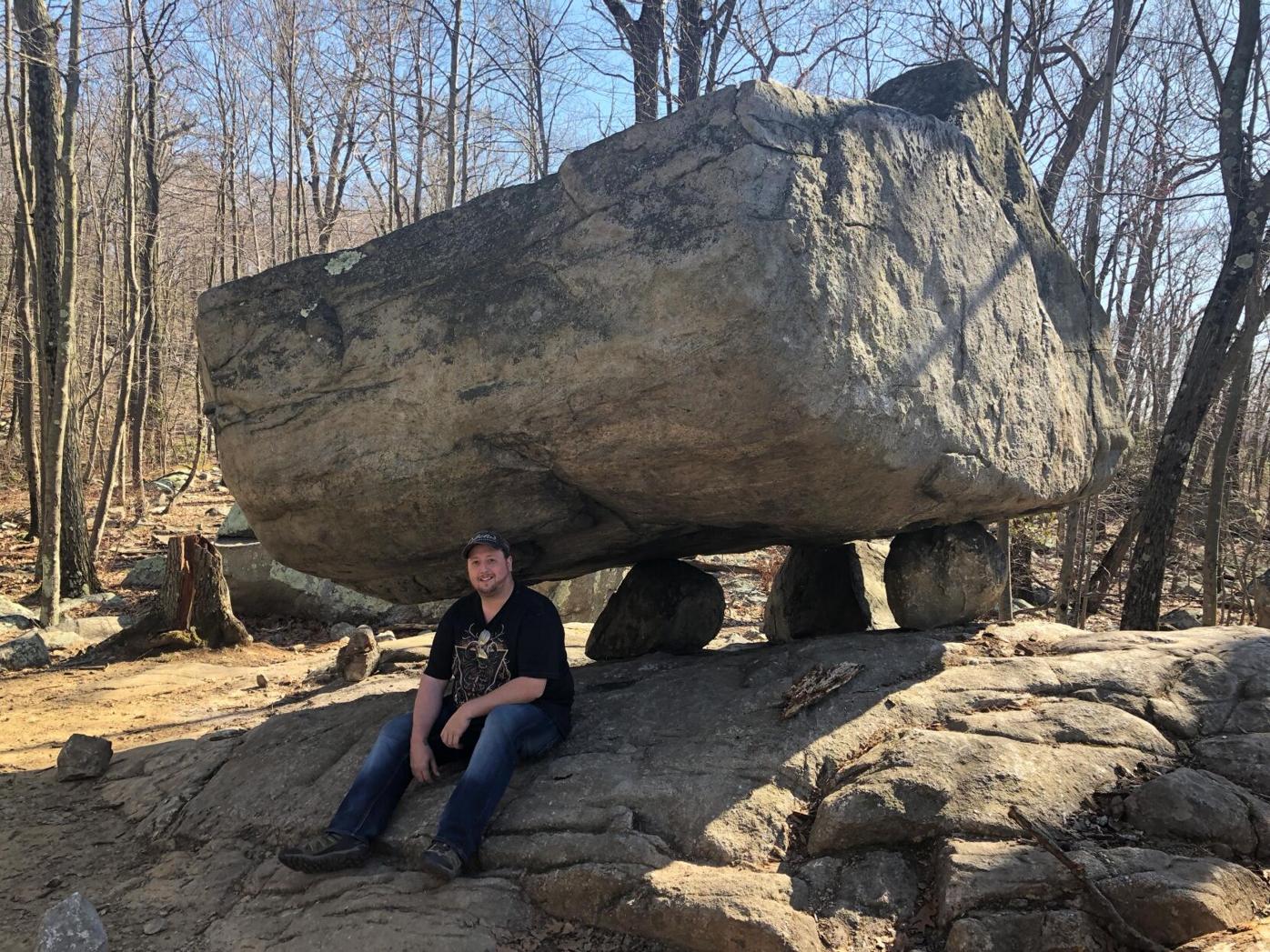 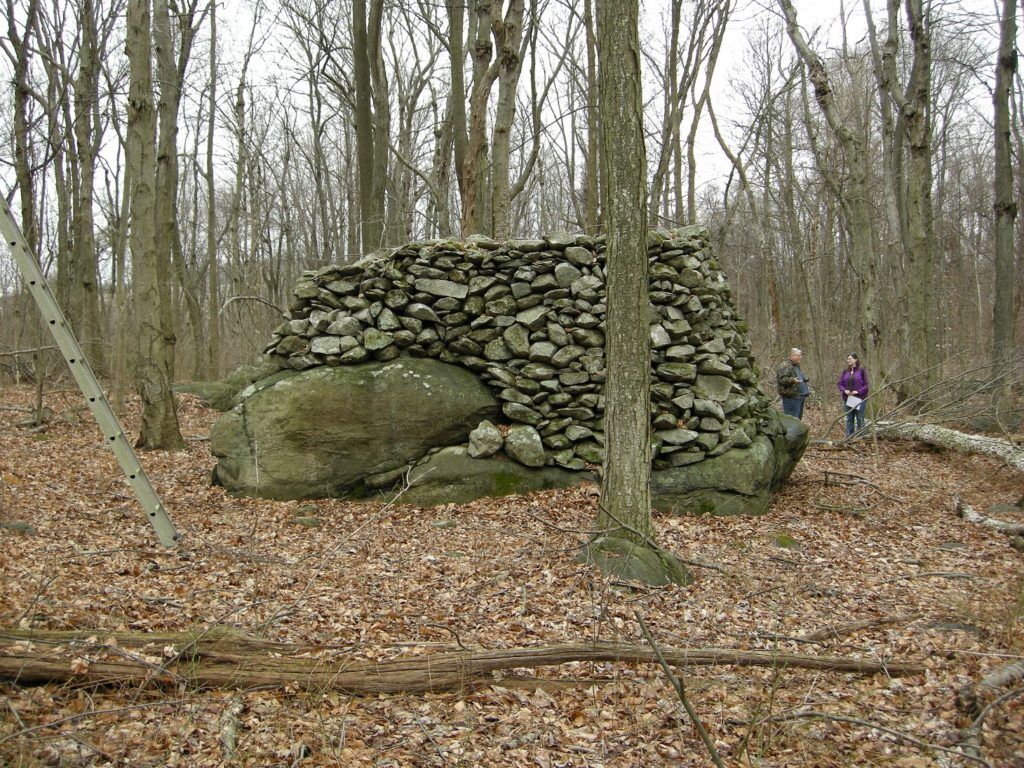 One of the stone features at the Oley Hills site in Berks County that was recently dated back to before the time of Christ. 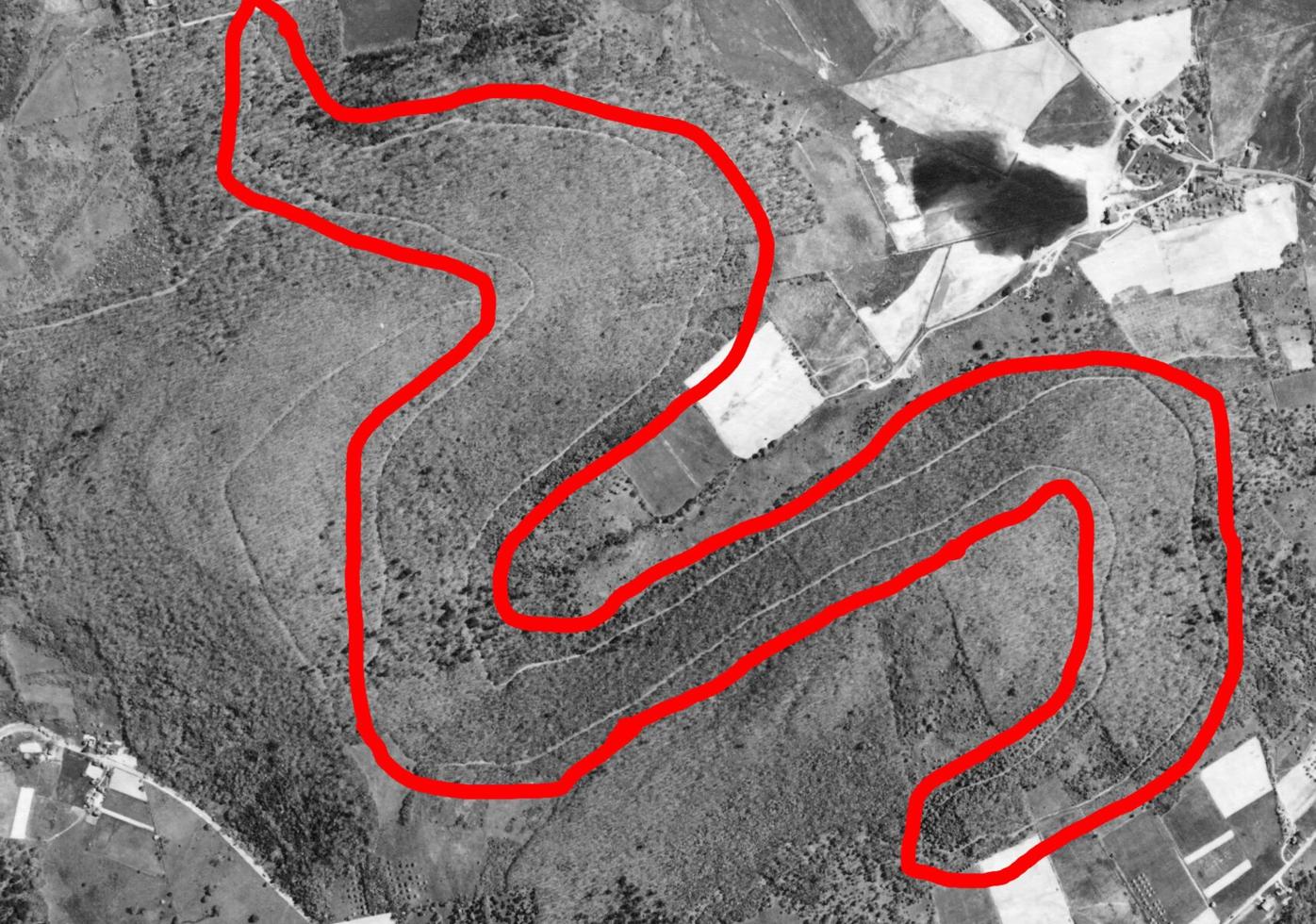 From the air, a 2-mile series of stone walls in eastern Pennsylvania shows what appears to be a snake of Native American design.

One of the stone features at the Oley Hills site in Berks County that was recently dated back to before the time of Christ.

From the air, a 2-mile series of stone walls in eastern Pennsylvania shows what appears to be a snake of Native American design.

Though concentrated in New England, eastern Pennsylvania is making waves in this new archaeological reckoning.

One of the most impressive stone landscapes is on a wooded property east of Reading. Known as the Oley Hills site, one ridge features a complex —some would say artistic — group of cairns, walls, a curved-row platform, a terrace and other formations spread out over 14 acres.

A luminescence analysis of the site recently published in North American Archaeologist, suggests they were erected around 570 BC, possibly by the Adena culture, which was centered in the Ohio River Valley. Artifacts associated with Adena have previously been found in western Pennsylvania, West Virginia and the Eastern Shore of Maryland.

“They are exceptionally well constructed and even artistic in nature, demonstrating a vision of design that sets them apart from what we think of as the normal, day-to-day agricultural activities of the colonial farmer,” said Norman E. Muller, a researcher for the New England Antiquities Research Association who has visited the Oley Hills site many times.

Then there is the site in an unnamed eastern Pennsylvania county that Matt Adams, founder of the North East’s Historical Stone Sites Investigations & Explorations Group, calls one of his most exciting discoveries ever.

Adams, an amateur archaeologist and astronomer from Boston, and his team were astounded when they walked the property in 2019 to find 2 miles of curving stone walls crawling through marsh and the contours of a mountain. But why was it so long?

Back at the house, the landowner unrolled a government aerial photo of the property from 1939. There, from the air, you could see it, a giant snake with a head and tail and another snake entwined with its tail. You can watch a video of the site exploration on Adams’ website, nehssie.com.

Adams said the from-the-sky perspective “forever changed the way I understood how the Native Americans thought.” They believe there are three worlds, he said: an underworld where spirits lived; the Earth where people live; and the sky world, the source of water, where the powerful Thunderbird lives and where souls of the dead reside in the Milky Way.

Adams believes the colossal snakes — such effigies are common in Native American stonework — were meant to be seen from the sky world.

For far too long, precisely crafted stone work such as these have been dismissed as having been made by early white pioneers. “Any consideration that American Indians built impressive works of stone has usually been dismissed out of hand and this attitude continues to the present day,” Muller wrote in a discussion of the Oley Hills site.

Part of this antiquated archaeological racism stems from a lingering belief that Native Americans were an inferior culture incapable of impressive dry masonry creations.

Adams and his team have investigated about 200 sites in 15 states so far over the last three years. “Honest to goodness, we are just regular people who have an interest in what lies hidden all around us,” he says.

Though some of the stone features they find certainly are root cellars and stone fences from the 1600s or later, others defy that explanation. He sees the same themes over and over and often separated by great distances. He is particularly impressed at how many formations align precisely with the solstices and other celestial events.

He has found propped-up boulders and stone effigies of whales, turtles, snakes, bears and birds.

There are other theories out there, that the works are those of Celts, Vikings or others who arrived before Christopher Columbus or the settlement at Jamestown. But because of a lack of archaeological evidence suggesting any of those cultures spent enough time here to make those structures, Adams thinks they are Native American in nature and certainly made before pioneers arrived.

Their uses are still debated. Sacred places or spots for rituals or ceremonies to contact the spirit world are top theories. Shapes represent spirits or portals for spirits and other symbols.

What is not hotly debated anymore is that we need to take a closer look at the rock features around us.

In 2007, the United States and Eastern Tribes organization issued a resolution saying sacred ceremonial stone landscapes existed and that traditional archaeological dismissals of the fact were leading to their destruction and ignoring their significance. A 2016 resolution by the group specifically mentioned “concentrations of pristine ceremonial stone groupings” in Pennsylvania.

Following the 2007 resolution, the National Register of Historic Places for the first time added a ceremonial stone landscape in Massachusetts.

Historical officials in Pennsylvania, too, are expanding interest in stone landscapes. After a visit to the Oley Hills site in 2020, the Pennsylvania Historical Museum Commission has begun working with the United States and Eastern Tribes group to record stone sites and landscapes.

“We need to be more open minded and explore all avenues of origin,” says Hannah Harvey, a former archaeologist with the Historical and Museum Commission who did the Oley Hills inspection.

The commission currently has 35 recorded sites in Pennsylvania containing “ambiguous stone constructions.” Most are clustered in the western, northeastern and southeastern parts of the state.

The commission wants to learn of more sites. To notify the commission of a possible stone site, go online to the commission’s website at phmc.pa.gov/PA-SHARE/Pages/default.aspx and create a free account to submit an inventory form.

Adams, meanwhile, is about to release a book for the untrained stone explorer, “Field Guide to Stone Features in the Northeast.” You can sign up for it and review videos and accounts of the group’s field trips on the North East’s Historical Stone Sites Investigations & Explorations Group Facebook page, its website, nehssie.com, and #nehssie on Instagram.

“Sometimes,” he says, “when I am analyzing these sites, I realize I might be the first person to see them for hundreds or thousands of years and it makes me feel like Indiana Jones.”

In addition to Adams’ group, other stone exploration sites can be found online at stonestructures.org and rockpiles.blogspot.com.

Pennsylvania hunters bagged more deer in 2020-21 than in prior season, buck harvest notable

Earlier this week, Brandon Crouser thought back to his childhood, remembering what it was li…

Trout 2021: Plenty of big fish; no changes in Lancaster County

Swooping down from an overcast sky Wednesday, a tiny bird beat its wings in the air above Colerain Township, instantly catching the attention …

Boaters are being urged to use caution if they plan to launch early next week in the waters above the Holtwood Dam.

Five years after installing a riparian buffer on his farm, John Young is already seeing changes — and not just in the health of the stream on his land.