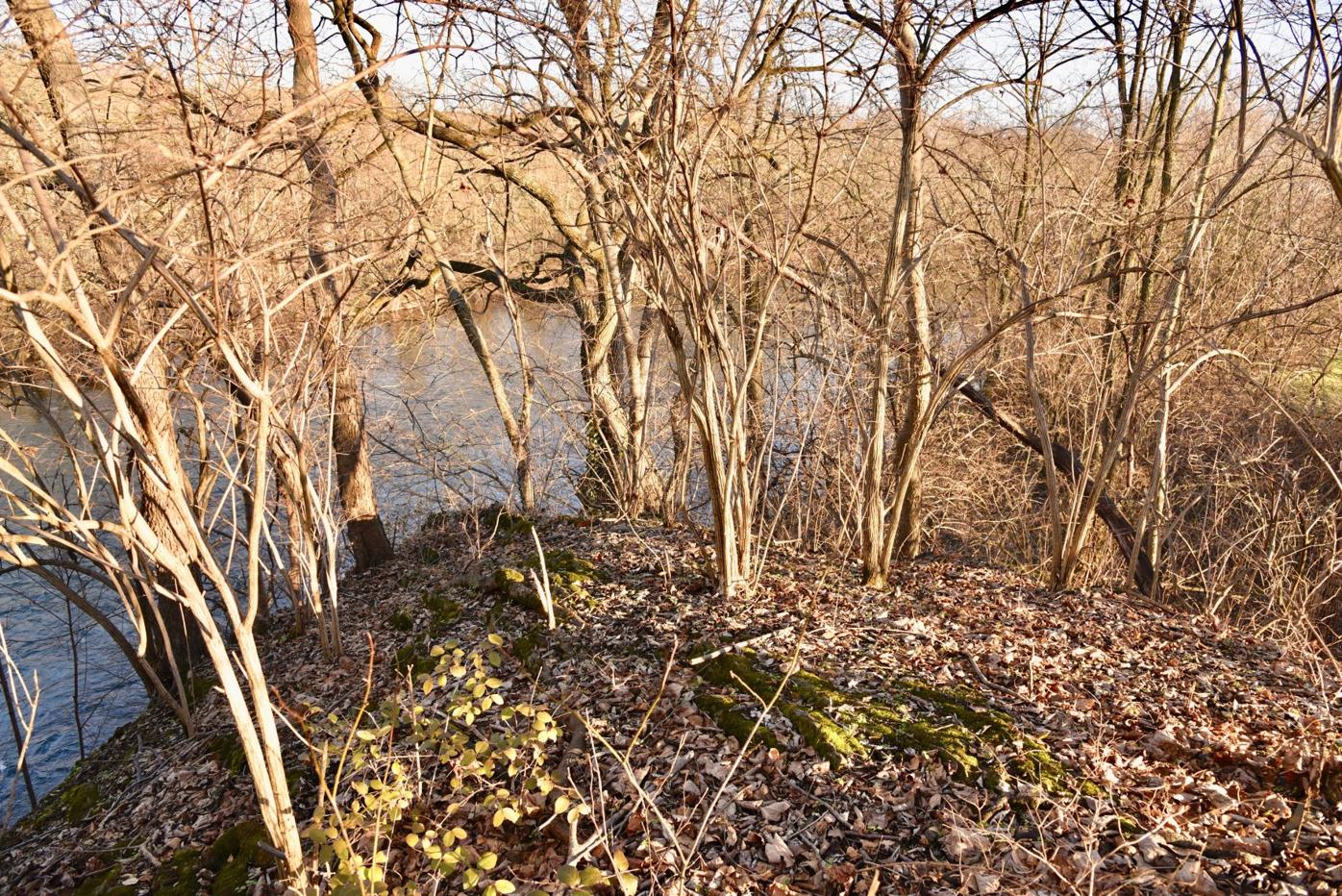 A view of the Conestoga River from a rocky bluff at a new trail system in Lancaster Township now open to the public. 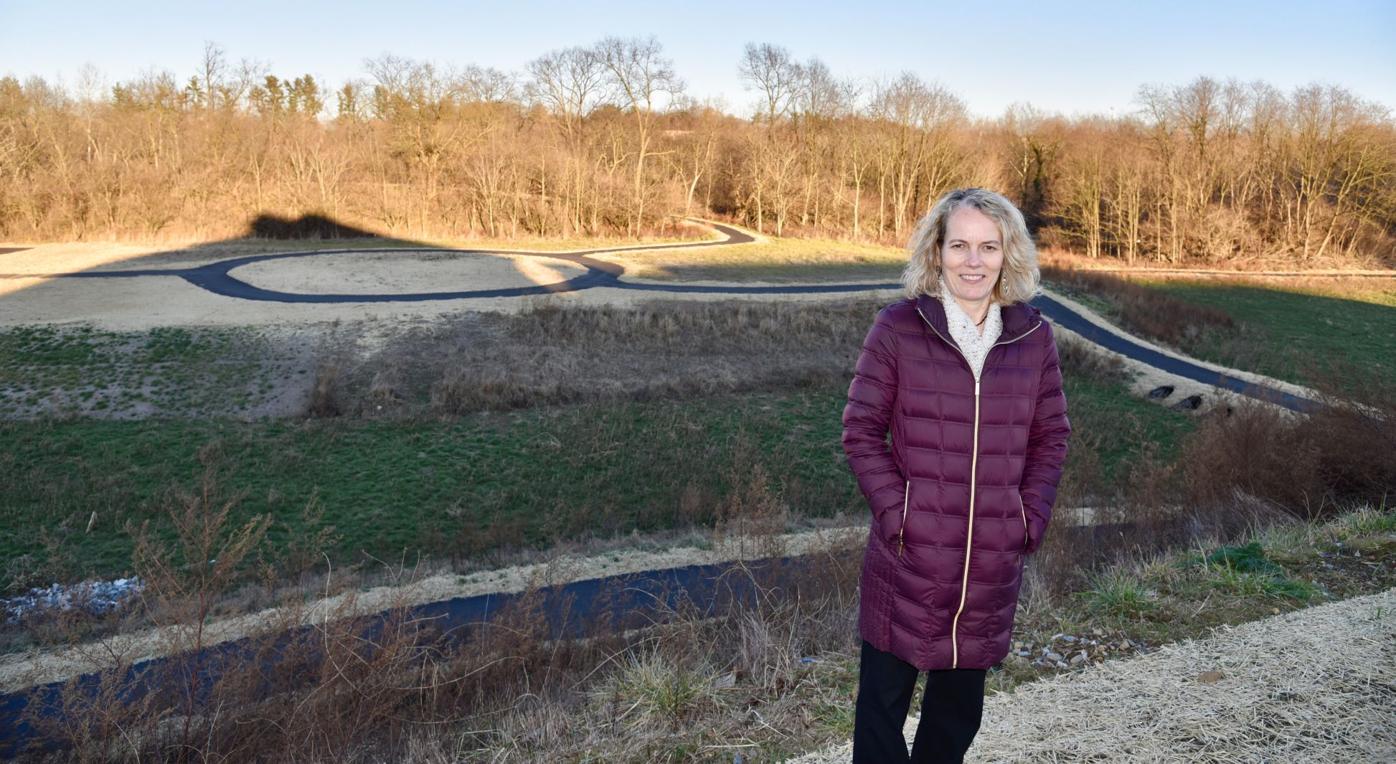 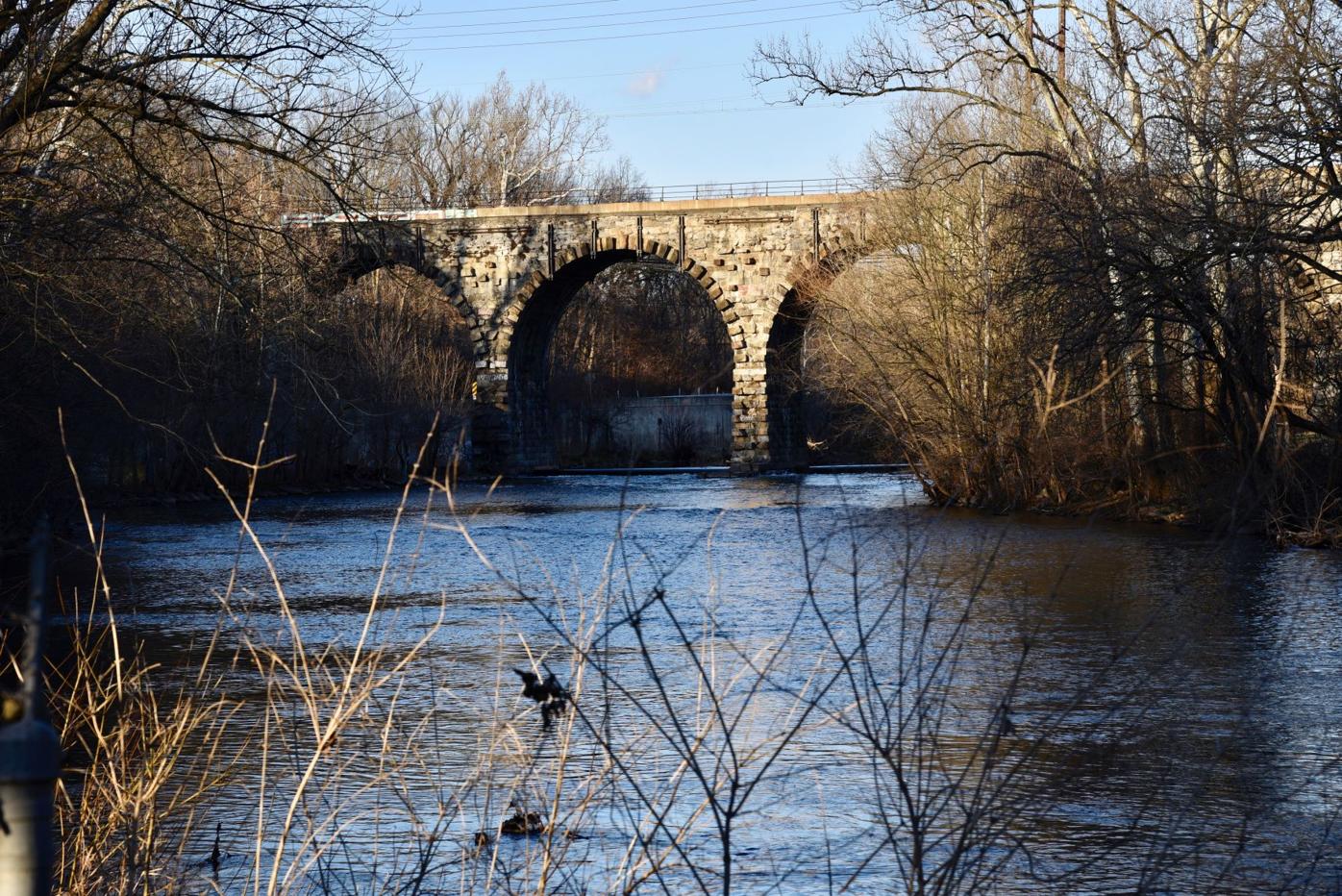 The old Pennsylvania Railroad bridge as seen from a new trail system in Lancaster Township near the city’s water works plant. 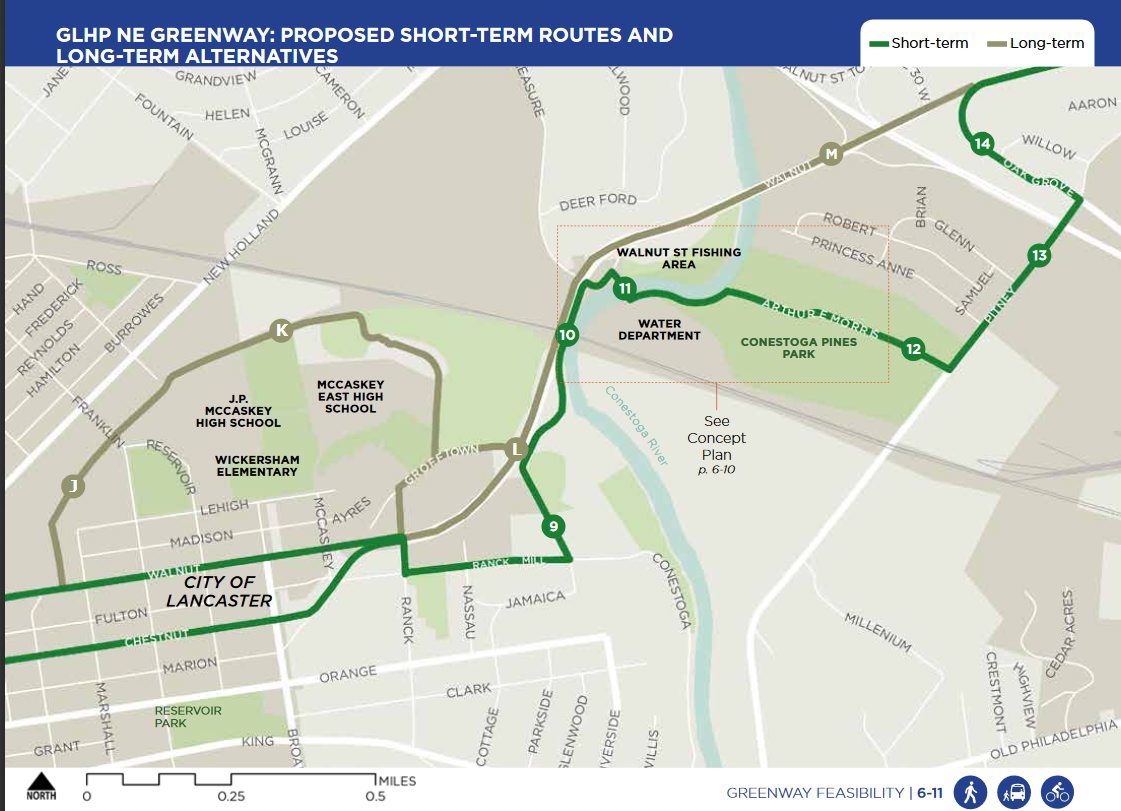 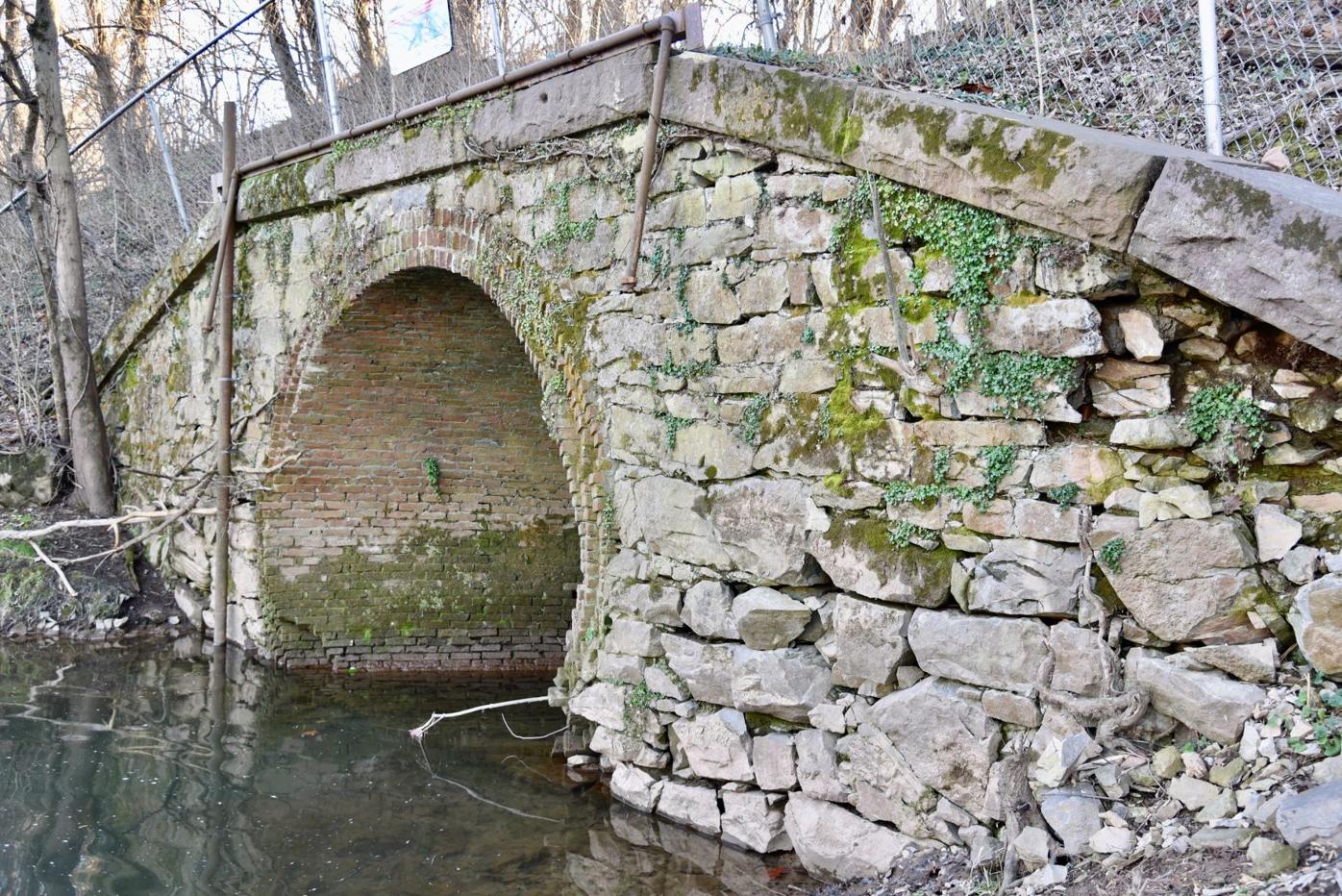 An old culvert along the Conestoga River from the days when the site was Lancaster city’s sewage treatment plant.

Arising from the ruins of Lancaster city’s old sewage-treatment plant along the Conestoga River, a modest but pivotal trail system and natural area has taken shape along the eastern edge of the city and is now open to public wandering.

A longtime vision of Lancaster Township and funded by Lancaster city, the 14-acre site in flood plains has three newly paved trails that lead through a mixed landscape. One ends at a rocky bluff overlooking the meandering river and the handsome stone-arch railroad bridge that thousands of drivers pass under daily on East Walnut Street on their way to Route 30.

From a six-space paved parking lot off Riverside Avenue, next to the city’s new Public Works Operations Center (225 Riverside Ave.), the short paved trails go through grassy strips of fields between patches of woods.

The variety of habitat should be a favorite for area birders. On my brief meandering, I spotted a Cooper’s hawk and a variety of skittish waterfowl on the river. Though not part of the new trail system, there is a rough unmarked trail through towering trees along the flat river bank with good fishing potential.

An adjacent 12-acre tract of woods bordering the river, also owned by the city, offers off-trail wandering downriver. The area is open from dawn to dusk. A gate closes access after dusk, so don’t get trapped inside. Pets are allowed.

“I think what we ended up with is pretty exceptional,” says Bill Laudien, Lancaster Township manager.

'A system under stress': Pa. state parks have a $1 billion backlog in needed work

Don’t be disappointed by the short lengths of dead-end trails. They portend the beginning of bigger things.

Namely, the Greater Lancaster Heritage Pathway. The biking and pedestrian network of paved trials could eventually stretch from Lancaster General Health’s Suburban Pavilion in East Hempfield Township, through the city and onto the infamous “goat path” for 5 miles to Leola.

That section of trail could become “a true destination trail that draws visitors from across the country to experience an amazing sequence of historic, recreational and programmed spaces, along with the natural agricultural beauty of Lancaster County,” according to county planners.

Some day, there may be a continuous bikeway and walking path all the way to Money Rocks County Park in eastern Lancaster County.

“The ultimate goal is the health aspect of it and to become a destination for recreation,” says Cindy McCormick, they city’s deputy director of engineering.

She also touts the path’s potential to serve as a more environmentally sound way of getting to and from work. “I just think it’s a mindset,” she says. “You have to change how people think about how they get to work and the options that they have. We want to provide all these different modes.”

The short-term plans are to extend one of the trails near the Operations Center along the river a short distance to the existing fishing area off East Walnut Street, directly across from the city’s water treatment plant. That should be built this spring.

A former vehicle bridge that crosses the river to the water plant will be retrofitted for bikes and hikers. That is expected to be done in the summer. A paved trail then will be built across the treatment plant fields and woods to Conestoga Pines Park.

The trail then will be extended through the park to Pitney Road, go north along Pitney Road, be routed under Route 30, then west through neighborhoods along Oak Grove Drive to the goat path.

A longer-term alternative is to build the trail from the Walnut Street fishing area beside a reconfigured Walnut Street to the goat path at the Route 30 westbound ramp. The trail may be tunneled under Walnut Street.

From the goat path, the trail could be located on the right of way beside the recently announced Greenfield Road relief road.

PennDOT and High Cos. will spend $15.3 million to build the 1.1-mile road as a quicker alternative to Greenfield Road at Route 30.

To get into the city, a dedicated bike and walking path may be built along Ranck Mill Road and join dedicated lanes along both East Chestnut and East Walnut streets.

Another long-term goal of the city is to extend the trail under Walnut Street to access an abandoned railroad bed that goes behind McCaskey High School and on to the recently built bike lane at East Walnut near Marshall Street.

Another of the new trails at the Operations Center ends abruptly in a field, next to 400 tree plantings from a riverside buffer project done by the city and volunteers in 2016. This, too, may only be the beginning.

Lancaster Township hopes to buy the adjacent 12-acre wooded tract or partner with the city to extend the paved trail south along the river and then cross South Conestoga Drive. A park could be built near the old Lancaster Osteopathic Hospital and the trail extended to Orange or King streets. The vision is a lot of moving parts, but hopefully the new beachhead means pushing forward.

From the winter 2020 edition of Balance magazine

$500 million needed for fixes to Pa.’s state parks. But there’s no agreement on where to get that money

Some state legislators are expressing concerns about funding gaps for Pennsylvania’s 121 state parks.

Backpacking in the wintertime: successful search for an escape recharges the soul [column]

The 14-mile Northwest Lancaster County River Trail along the Susquehanna River has been tremendously popular since it opened in 2014. And for …