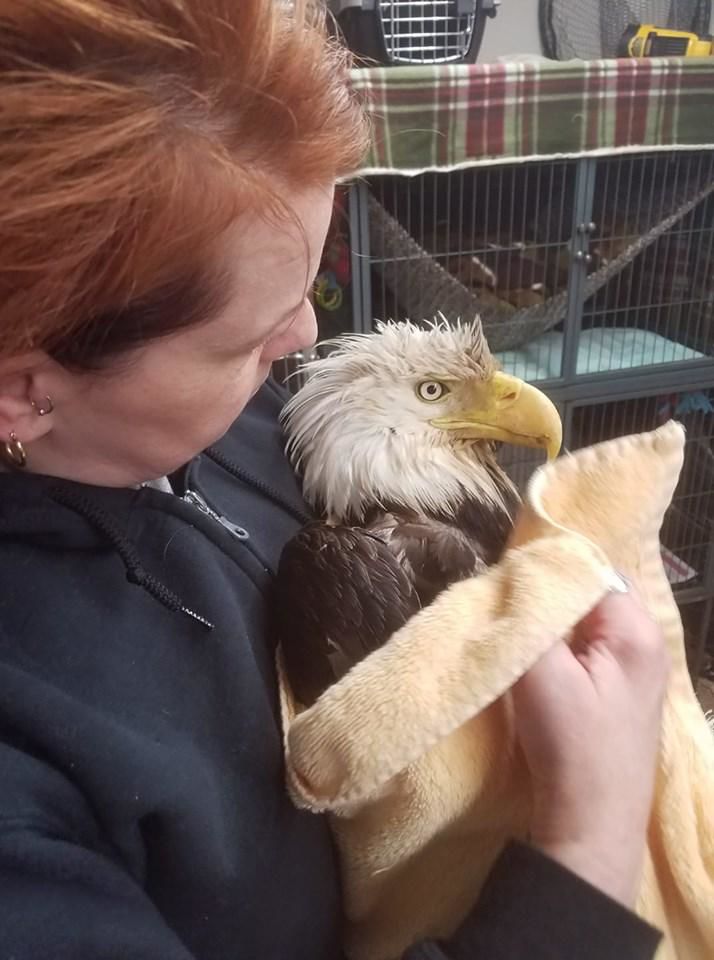 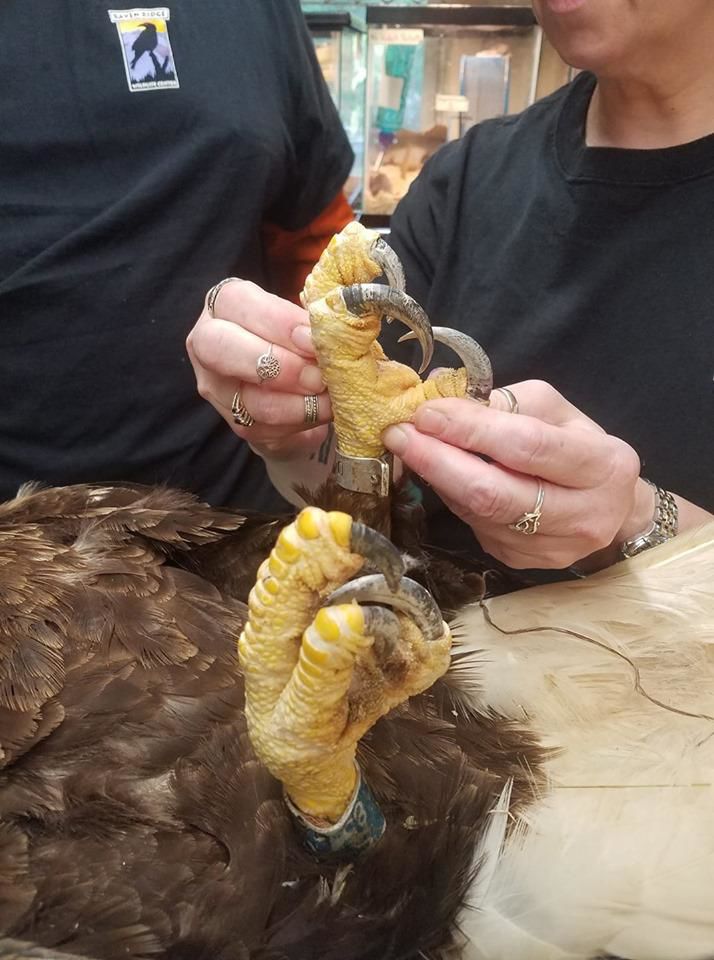 Physical therapy was performed daily on the eagle that had been electrocuted. 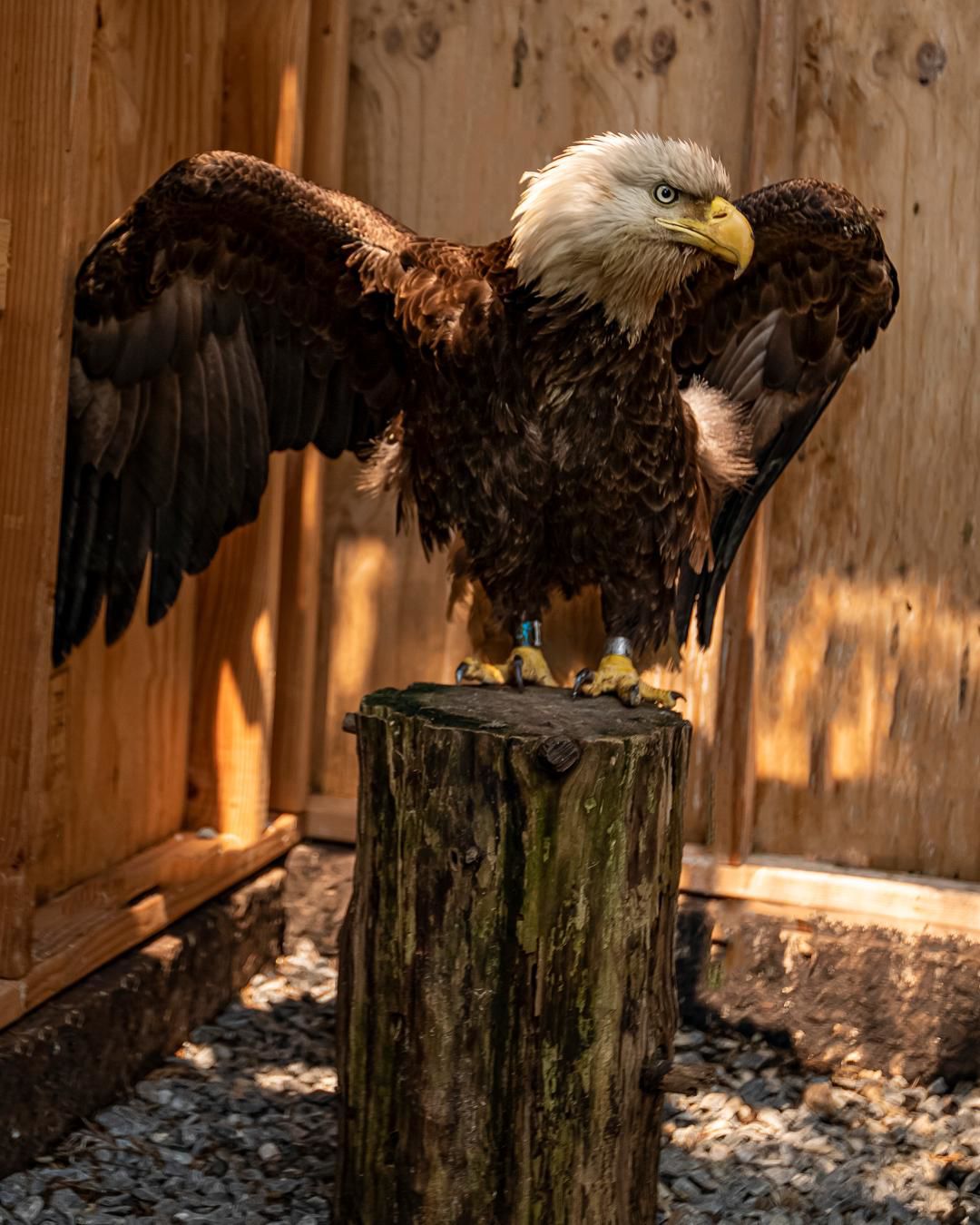 A bald eagle found near death near Mount Joy is on the mend at Raven Ridge Wildlife Center.

The comeback of the bald eagle in Pennsylvania is one of the state’s most celebrated wildlife restoration projects.

And Lancaster County figures heavily into that success story. The county usually is first or second in the number of eagle nests, mainly because of the plethora of ideal nesting sites along the Susquehanna River, though, increasingly, eagles are nesting near inland streams throughout the county.

In 2015, for example, Lancaster County had 20 nests, second only to Crawford County.

Lancaster County man rescues eagle injured on Route 30 near Downingtown: 'She just hung out with me'

Because eagles, as of 2014, are not considered endangered or threatened in Pennsylvania, the Pennsylvania Game Commission no longer expends manpower to try to count every eagle or nest in the state. But it’s estimated there are about 300 active nests this year.

With so many eagles around, it’s not surprising, and fortunate, that an increasing number of people are finding injured eagles and rescuing them.

Just in the last month or so, there have been two eagle rescues in the county and another involving a county resident in Chester County.

On May 25, a motorcyclist from Gordonville, Dandon Miller, rescued an adult female eagle after it had been struck by a car on Route 30 near Downingtown. Miller held the raptor on the side of the road until it could be taken for rehab by Delaware-based Tri-State Bird Rescue & Research.

Then, during a storm last month, a 12-week-old eaglet was blown out of a nest near East Earl. Fortunately, Chester County resident George Tallman, who has been photographing the nest for several years, found the eaglet on the ground and notified the Game Commission.

The eagle also was taken to Tri-State, where it healed from minor injuries and was released at the nest site a little over a week ago.

Then there’s the stirring saga of a 13-year-old female eagle that was put under the care of Tracie Young, who runs Raven Ridge Wildlife Center near Washington Boro.

A game warden delivered the emaciated eagle to Young on May 14, and the rehabber’s heart sank when she saw her new patient.

“It was the saddest-looking thing I’ve ever seen,” Young recalls. “It was wet, cold and visibly shaking. I’d never seen that before.”

An angler had found the bedraggled eagle near death on the ground near a pond in the Mount Joy area.

On the bird’s legs were two bands showing that the eagle had been identified in 2006 in New York state.

Young had performed triage on several eagles before, but had never been the person responsible for saving its life. “I panicked because this eagle—I’ve never seen an eagle in such bad shape,” she says.

An adult eagle can weigh up to 17 pounds, but this one had shrunk to a little over 7 pounds. Tests came back negative for lead poisoning, a typical symptom of underweight eagles.

Young started giving the eagle fluids every several hours and feeding it a special formula liquid used for dying or emaciated animals. It was a three-person operation — one person to hold the eagle, another to pry the beak open and a third to insert the tube down the bird’s gullet.

Another problem surfaced when the eagle couldn’t even stand. Young was thrilled after three weeks, when the bird finally stood on its own. But it had a noticeable limp, and to her concern, Young noticed the skin on its left foot turning black, a sign that it had been electrocuted. There were fears the decaying foot would have to be amputated.

Young and her husband administered physical therapy twice a day, opening and closing its talons. The foot seemed to be healing, but still the eagle would not leave the floor and perch on an upper log, a prerequisite for the eagle ever being released back into the wild.

“Then, one day I came out and looked up and there she was on the top perch. I was crying because I was like, she’s going to pull through this,” Young remembers.

The eagle is now up to 11 pounds and eating the offerings of rats on her own. Young is confident the eagle, whom she has named “Legacy,” will be let loose back into the wild.

For Young, the rehabilitation has been exhausting. With a national symbol as her patient, she felt pressure “because eagles mean so much to everybody.

“There are more bad days than good days in rehab. You see suffering, things you can’t do anything for no matter how much you try. There are just days where I ask myself, ‘Why am I doing this?’

“Then an animal like Legacy comes to me and this is why I do it. There’s nothing more humbling and will send chills down your spine than a bald eagle looking at you.”

Because the Game Commission no longer does annual eagle surveys, it is reaching out to the public to keep tabs on eagle nests. You can report an active eagle nest to the agency online at pgcdatacollection.pa.gov/baldeaglenestsurvey.

Says Patti Barber, an endangered bird biologist with the Game Commission: “There are more eagles than we have resources to keep up with, but that’s the best possible scenario.”

In early July, the Pennsylvania Game Commission typically sends out a bald eagle nest count. This year, there was no list.

Just one more time. One last time. But not yet.

One of the nice things about summertime is that, like the George Gershwin song says, “the livin’ is easy.”

Residents wrangled 8-foot python into a trash can, rescuing it from the cold in Manheim Township

A massive snake was found in the backyard of a Manheim Township residence Friday morning.