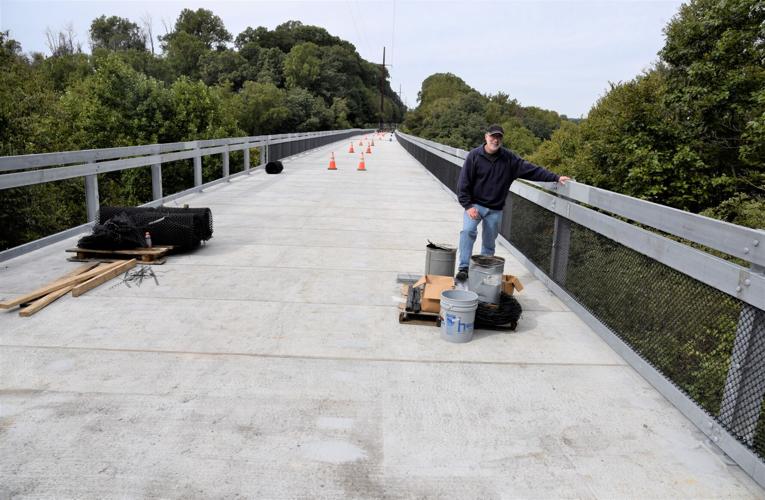 Jim Hearn goes over the finishing touches on the Martic Forge railroad trestle that has been resurfaced after a 2018 arson fire. 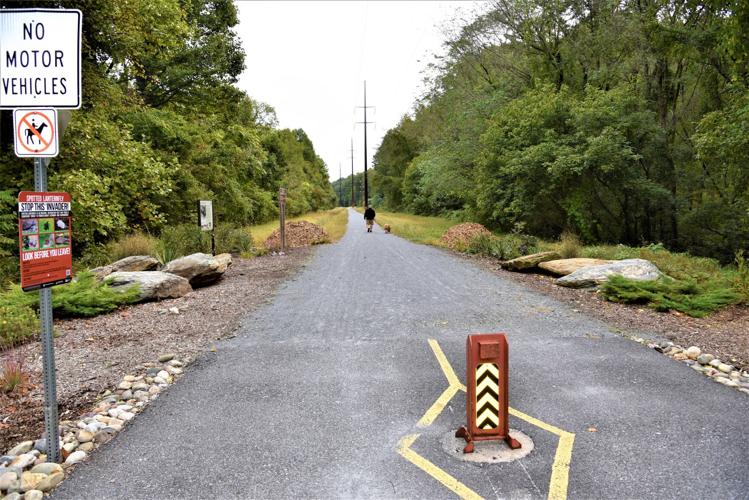 A user and his dog stroll down the Enola Low Grade Rail Trail from a trailhead in Martic Township near the rebuilt Martic Forge railroad trestle. 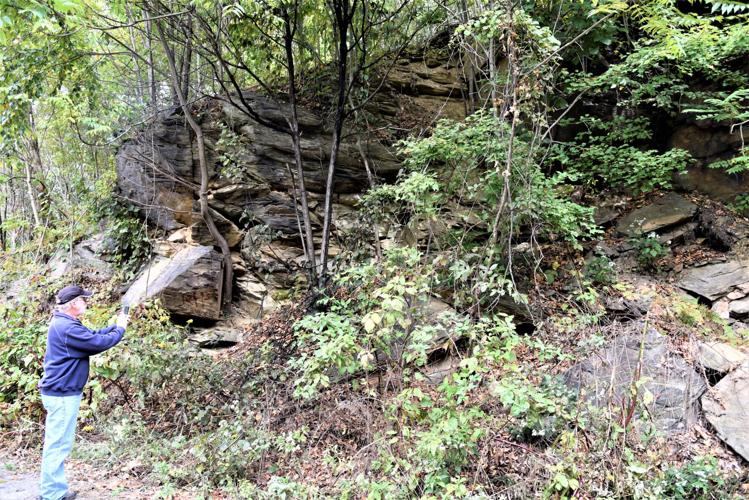 Jim Hearn, of Martic Township, admires rock cliffs on the approach to the Martic Forge railroad trestle that has been rebuilt as a pedestrian crossing on the Enola Low Grade Rail Trail.

Jim Hearn goes over the finishing touches on the Martic Forge railroad trestle that has been resurfaced after a 2018 arson fire.

A user and his dog stroll down the Enola Low Grade Rail Trail from a trailhead in Martic Township near the rebuilt Martic Forge railroad trestle.

Jim Hearn, of Martic Township, admires rock cliffs on the approach to the Martic Forge railroad trestle that has been rebuilt as a pedestrian crossing on the Enola Low Grade Rail Trail.

Now unburnable, the historic Martic Forge railroad trestle has literally risen from the ashes. It’s ready to close the last missing link in the Enola Low Grade Rail Trail, a multiuse 29-mile pathway across Lancaster County that could become a national destination.

A dedication ceremony will be held on Thursday, Oct. 27, for invited officials, legislators and residents involved in the $3 million restoration to a pedestrian crossing of the grand structure that rises 150 feet above Pequea Creek between Martic and Conestoga townships.

A badly needed new trail crossing of Route 324 from a trailhead parking area on Red Hill Road in Martic Township also is part of the celebration.

The public is invited to begin walking or biking across the bridge beginning Friday, Oct. 28.

The span was set afire in 2018. A teen at the time from Columbia is awaiting trial on charges.

It was only in June that the $9 million refurbishing of the Safe Harbor railroad trestle 3 miles down the trail was celebrated. That linked Manor Township’s 5.25-mile section of the Enola Low Grade Rail Trail along the Susquehanna to the 25 remaining miles that head west through the River Hills and farmland in southern Lancaster County to Atglen, a mile east of the Lancaster-Chester line.

Except that only 3.5 miles down the trail you came to the gated Martic Forge trestle.

Now, with the upcoming bridge opening, a continuous rail trail envisioned some 30 years ago is finally at hand. The newly connected sections in Martic and Conestoga townships include such popular natural features as Shenks Ferry Wildflower Preserve and Trout Run Nature Preserve.

“It’s a wonderful gift to our community. It’s a credit to the municipalities that they never wavered. They met within two weeks after the fire and settled on getting it fixed,” says Mike Domin, principal planner for the Lancaster County Planning Commission.

Resolve notwithstanding, it hasn’t been easy.

In 2015, a $750,000 makeover had turned the abandoned century-old railroad trestle into a wood crossing for users of the rail trail. A parking lot, trailhead and a pedestrian crossing over Route 324 were installed on the Martic Township side and just about to open when the trestle was set afire in broad daylight.

Though local officials quickly vowed to rebuild, a number of financial and physical obstacles quickly became apparent. There was a modest insurance payout and most of it had to be used just to dismantle and dispose of the charred decking. Then it was discovered the intense heat from the fire had twisted some of the steel infrastructure.

This time, rather than wood, the 634-foot-long decking is concrete and the railings galvanized metal. “This bad boy is not going to burn this time. There’s not a stick of wood,” says Jim Hearn, a frequent trail user and head of the Martic Township Rail Trail Advisory Committee.

The soaring view above the Pequea and surrounding wooded hills is unchanged. The approach to both ends of the bridge is through impressive stone cliffs. These were formed by cuts made more than 100 years ago by dynamite and hand-wielded picks of laborers building the Low Grade rail line that was an engineering marvel for its time.

Vital to the opening of the trestle is a new, safe crossing of Route 324 (Marticville Road) near the bridge from the nearby trail parking area on Red Hill Road. The long-term goal is to erect a pedestrian bridge over the road to assure safe passage.

“That was really important because that crossing was extremely dangerous,” Domin observes. “That’s just as important as that bridge.” Martic Township had stop signs erected on Route 324 a couple years ago as one safety measure.

With the Safe Harbor and Martic Forge trestles now connecting cutoff sections of the rail trail, it is smooth sailing on a crushed-stone surface from Turkey Hill to Quarryville Borough. That excites Quarryville officials who are planning on building and elevated side trail to get trail users to come into town to sample restaurants and other amenities.

Attention now turns to getting a new pressed-stone surface down on the 6-mile, easternmost section of the trail in Bart and Eden townships. Permitting had been a bit of a challenge with the state over the status of wetlands that had formed in areas of standing water. But funding is now in hand and Domin hopes the trail surface will be ready for use by next summer.

That leaves just 3 miles of resurfacing in Sadsbury Township to the county line. Funding from the state and county should be forthcoming by the end of November and Domin thinks the surface could be built by the end of the summer.

Both Hearn and Domin believe that a 29-mile continuous rail trail will make the Enola Low Grade Rail Trail a regional, if not national, draw with all the attendant economic benefits as users seek places to stay, eat and explore.

Domin also is hopeful Chester County will complete a remaining 1-mile section from the county line into Atglen, where there will be a main trailhead.

The Atglen connection is important because there are plans to extend the Chester Valley Trail, a multi-use rail trail, from Exton to Atglen. An extension could be built connecting to the existing Schuylkill River Trail, which goes on to Philadelphia on abandoned rail lines and will eventually run to Reading.

So, hopefully, one will be able to walk or ride a bike from Turkey Hill to Philadelphia. There also are plans to extend SEPTA train service to Atglen, offering the option of taking your bike on a train into Philadelphia and exploring the Schuylkill River Trail.

“It’s just a very exciting time for Lancaster,” Domin says. “We’re completing these trails after 30 years of work all about the same time.”

See what fixing an old bridge can do?

Pennsylvania’s newest state park may be in York County, but Lancaster County residents have …

Ahead of receiving a lifetime achievement award from Lancaster city on Saturday, Enelly Betancourt said she still couldn’t believe it was happening.

It's shaping up to be an idyllic autumn week in Lancaster County.

Sizing up the daunting Thousand Steps trail, one of Pennsylvania’s most unique pathways [column]

MOUNT UNION — There comes a sobering point in most of our lives, I suspect, where you realize your body is slowing down and you really can’t d…

For decades, Pennsylvania celebrated “hunting Monday” on the first Monday after Thanksgiving as the statewide firearms deer season opened.

With booming business in Marietta and Columbia, river trails prove to be a boon

In the old riverfront towns of Marietta and Columbia, you don’t have to wait long these days to spot a vehicle laden with a bike or kayak, qui…

Fossils date to when Manheim Township was an ocean floor

There are fossils in Manheim Township that give a glimpse into the species alive when Lancaster County was an ocean floor.