Russ Guthrie uses high-tech terrain imagery and his computers to guide hunters to deer hotspots on their properties.

Using detailed aerial imagery, Russ Guthrie predicted where a buck is likely to bed down at night on this property in Northumberland County. Shortly after a snow storm, the landowner walked to the spot and found where five deer had bedded down in the snow. 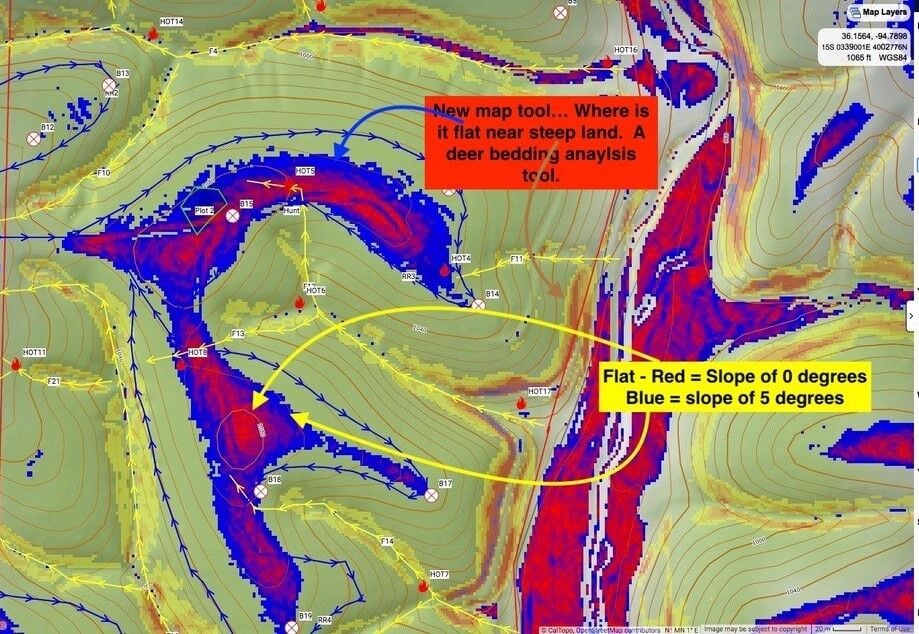 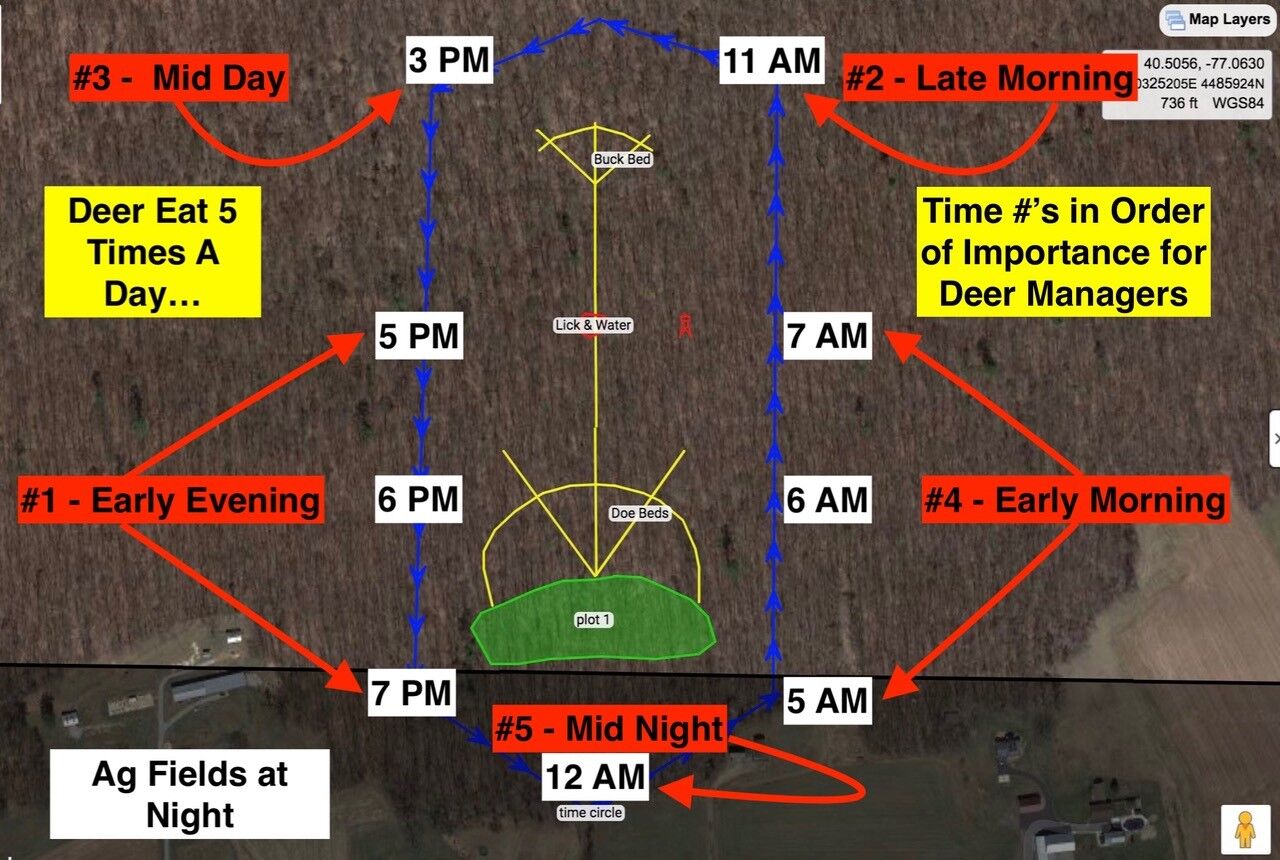 In this property analysis, Russ Guthrie suggests where hunters should be at certain times of day to intersect deer moving to and from farm fields, a food plot and doe and buck bedding areas.

Russ Guthrie uses high-tech terrain imagery and his computers to guide hunters to deer hotspots on their properties.

He had never set foot on the wooded property, but using light-beam technology called Lidar that gives unprecedented accurate imagery of the terrain below, Guthrie was telling the hunters where they should be hunting for bucks.

He had just gotten to the part where his analysis of the topography suggested the location of a buck bedding area when one of the hunters in the audience chuckled. He had, he explained, killed an 8-point buck at that very spot last season.

It was hardly the first time the computer deer guide had successfully steered hunters to deer in places he had never been. A few months ago, Guthrie had advised the nephew of a farmer in Northumberland County to look for deer beds at a certain spot. The landowner excitedly reported back that he had walked to the spot after a 10-inch snowfall on Feb. 13 and found depressions where five deer had bedded down.

Guthrie, 74, of Millersburg, finds joy in bringing smiles to the faces of hunters, especially multigenerational families who hunt together. He’s hunted since he was a boy growing up in Northumberland County. The former Manor Township resident now wants to give back by helping, for free, hunters find deer.

“I get a kick out of showing love to people in a way that you can’t buy at Sears and Roebuck,” he said. “I just found that hunting is a good place to make good things happen, not only in the sport, but also in life. Hunting builds character in a kid.”

He’s in a unique position to do so because of his knowledge of computers and the endless world of apps. An early guru of computers when they were just spreading into schools as an indispensable educational tool, he has helped to set up computer systems and train teachers how to use them in 51 school districts across the state.

Guthrie is able to learn so much about a property from afar thanks to Lidar, an acronym for “light detection and ranging.” A revolutionary way of mapping terrain first developed for military applications, Lidar allows precise views of the ground, including such details as ditches, cliff faces, exact heights of trees and even etched deer trails.

Similar to sonar and radar, which use sound waves and radio waves, respectively, Lidar bounces pulses of light emitted from lasers across the surface, then a computer measures the distance. GPS systems help construct a precise 3D rendering of the surface, whether natural or manmade. It can even penetrate the spaces between leaves of trees to map understory vegetation. In some cases, you can even tell tree species by the different way leaves reflect light.

Normally, Lidar surveying is done with airplanes or helicopters.

The old U.S. Geological Survey maps many hunt camps still use showed differences in elevation in 50- to 150-foot chunks on the landscape. Lidar can show terrain differences for every 2.3 feet and soon that will be every 1 foot.

The applications, now that they have migrated from the military to public use, are endless. Agriculture has been one of the biggest beneficiaries. Light bouncing off crops comes back in different colors depending on the plant’s maturity. That can show farmers where they are applying too much or too little fertilizer. It helps Guthrie monitor the health of food plots he helps landowners or clubs plant to attract deer.

Scientists for the National Oceanic and Atmospheric Administration are using Lidar to more accurately map shorelines. Engineers can sketch out the best routes for roads without time-consuming field investigations.

In Alaska, federal and private partners concerned about sustainable management of the Tongass National Forest used Lidar to discover streams, decide when stands of forest were old enough to be timbered to protect the understory, preserve critical salmon habitat and find old cultural sites along shorelines.

In Washington state, Lidar helps monitor volcanic activity, map fault zones that might warn of earthquakes, find landslides and determine which land might be inundated by a tsunami.

Lidar has become an aid in criminal investigations too, helping discover bodies in shallow graves.

How he spots them

In Guthrie’s case, Lidar has enabled him to give back for a lifetime of hunting experiences by directing friends, their families and sometimes strangers to where the deer are.

With even the most subtle changes in elevation available on his screen, Guthrie looks for grades of 1% to 5% on steep mountain slopes that deer are likely to use to get between bedding spots and food sources.

“The deer like flat land because they don’t expend as much energy,” he says. “They don’t like to walk on a side of a hill. Do you? It’s so simple.”

He knows in the winter that deer want to be warm. So he uses an app that shows slope shading to tell him where sunshine will hit a mountainside.

He tries to sniff out what he calls “military spots.” Saying bucks will spend most of their time on the top quarter of a mountain, he looks for flat points where bucks will lie during the day or night. The buck wants to have wind at its back to smell danger while being able to look down and scan a large part of the steep mountainside in front. Like humans, they also prefer to sleep on a flat bed.

He also searches for path-of-least-resistance trails that also are situated on terrain where a deer knows it can be out of sight in a few jumps if danger is spotted or smelled.

Another trick Guthrie uses is to look at earlier Lidar views to determine when logging has occurred to ferret out forest edges and early growth woods that deer seek out for food.

Guthrie has helped more than 30 property owners over the last five years, from Pennsylvania to Minnesota to Oklahoma. Some are former neighbors and fellow parishioners from his old church in Manor Township, or their friends and family. Some see the photos he posts on Facebook of young deer hunters with beaming faces and contact him to analyze their own land or seek advice on where to put food plots and what to grow in them.

Time willing, he obliges all with no other compensation than to get back reports of successful hunts and photos of happy hunters. Many times, he’s along on the family hunts.

“Money gets in the way,” he says. “I don’t have customers, I have friends.”

Guthrie has one other piece of advice: “Every hunting club ought to have a map reader.”

The orchards of Adams County, Pa., have managed to stay out of the spotted lanternfly’s growing spread.

Now's the time to go see snow geese at Middle Creek, to hunt for shed deer and elk antlers and for local streams to be stocked with trout.

A photo, taken last summer, shows a spotted lanternfly, along with another insect, balanced atop dark purple grapes on a vine at Waltz Vineyar…

Solar to power half of state government, construction planned for York County

Solar energy could soon power about half of Pennsylvania’s state government operations, with officials announcing Monday they plan to purchase…

Trout 2021: Plenty of big fish; no changes in Lancaster County

Editor's note: This story accompanies a larger story on the planned hydrogen production plant in Lancaster County. For the full story, click here.

Earlier this week, Brandon Crouser thought back to his childhood, remembering what it was like growing up along the Little Chiques Creek as wi…

Pennsylvania hunters bagged more deer in 2020-21 than in prior season, buck harvest notable

'Like a holiday': Anglers take to Lancaster County waters for opening of trout season

With fishing rods at his feet, Jordan Henson stood Saturday morning on the banks of Big Beaver Creek, anxiously looking at his phone and annou…

On Thursday, Michael Kuriga described a typical hunting trip — walking alongside a trusted dog through fields, brush and brambles while trying…