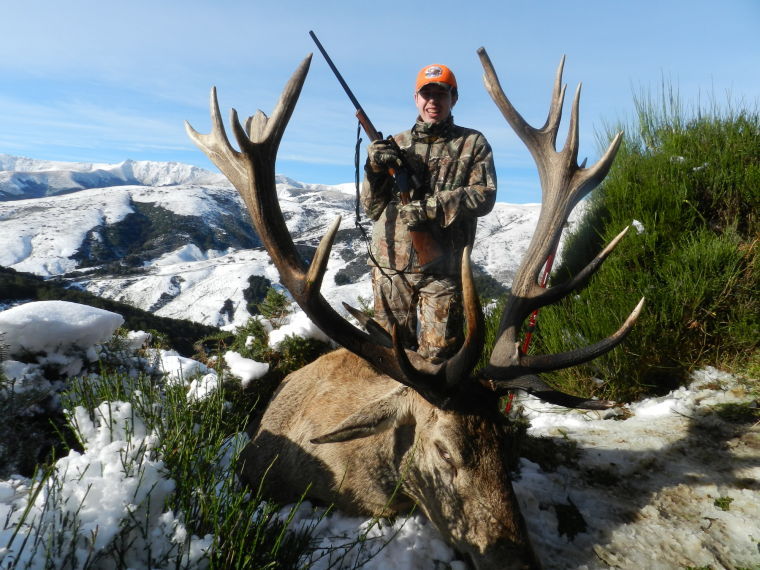 Carson Rehm, 20, of East Lampeter Township, is all smiles standing behind the 23-point red stag he shot in New Zealand in May. 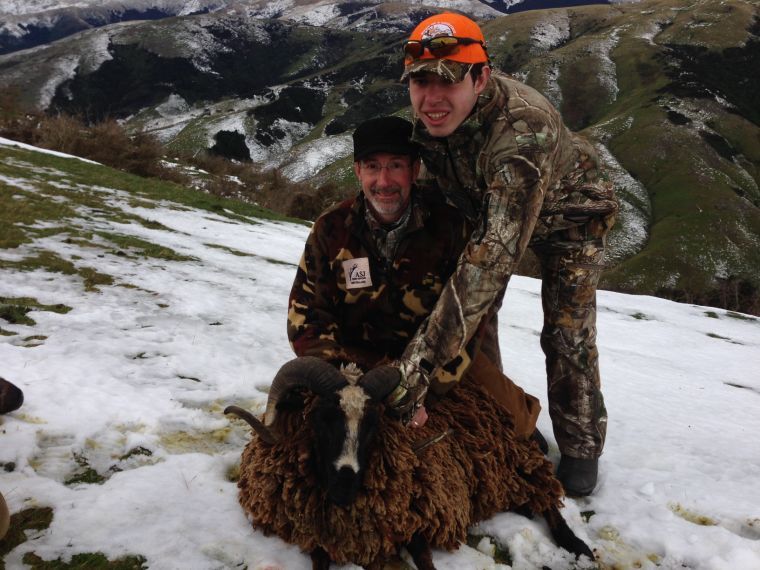 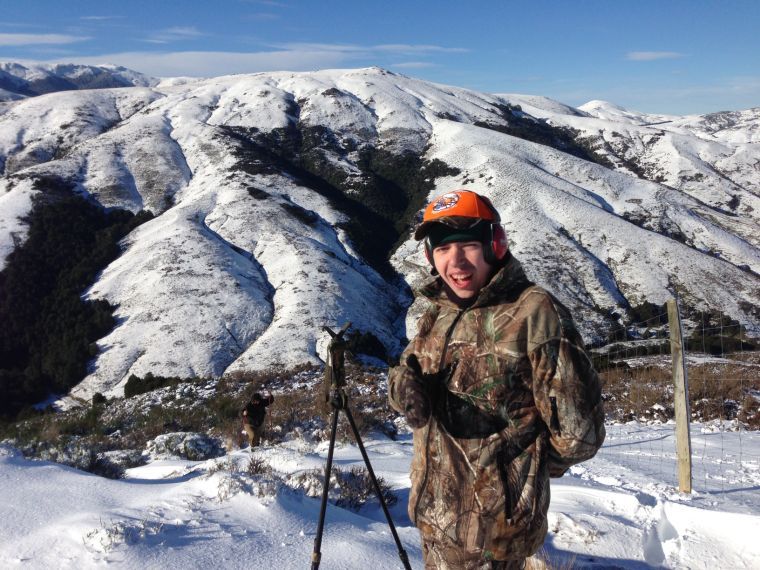 Carson Rehm gives the thumbs up as he looks over the snowy hills of New Zealand. 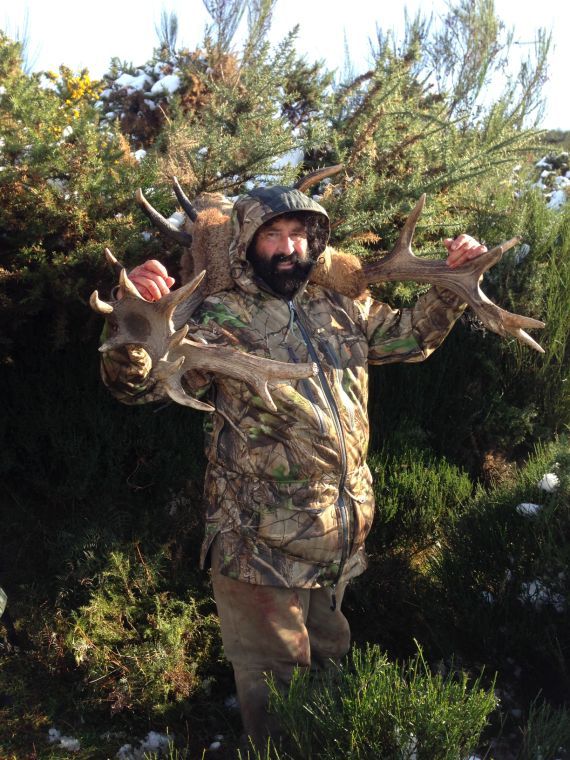 Guide Stu-e Rees hauls the rack from Carson's massive stag on his shoulders.

Carson Rehm, 20, of East Lampeter Township, is all smiles standing behind the 23-point red stag he shot in New Zealand in May.

Carson Rehm gives the thumbs up as he looks over the snowy hills of New Zealand.

Guide Stu-e Rees hauls the rack from Carson's massive stag on his shoulders.

It was a simple question, really.

One that Carson Rehm was prepared for.

A man standing at the Hunt of a Lifetime booth at this year's Great American Outdoor Show in Harrisburg asked Carson, "If you could hunt anywhere in the world, for anything, what would you like to hunt?" Carson's mom, Sharon, recalled.

"I want to hunt a red stag in New Zealand," Carson replied without hesitation.

That's how an East Lampeter Township 20-year-old, who was born with DiGeorge syndrome, got the chance to fulfill a dream.

According to the Mayo Clinic, DiGeorge syndrome is a defect of chromosome 22, which can cause a variety of health problems and intellectual disabilities.

For Carson, DiGeorge “has affected most every part of his body,’’ his mother said.

He had three open-heart surgeries before he was 2 years old, one of which resulted in the placement of a new valve.

Those surgeries, in turn, led to Carson developing severe scoliosis.

He had two rods inserted into his back in 2010 to help straighten his spine.

Carson had a fourth heart surgery in January to replace the valve that was installed nearly 19 years ago.

Sharon said Carson also has issues with his immune system and his ears, and he has a soft palate.

Intellectually, he is many years younger than his physical age.

But he's smart as a whip, according to his dad, Scott.

"He has an incredible memory for details," Scott said.

Spend a couple of minutes talking to Carson, and you'd never know this is a young man who was dealt a difficult hand in life.

He's always smiling and is quick with a joke.

He loves to watch hunting shows on television and can tell you everything you'd ever want to know about his favorite personalities — Jim Shockey, Tom Miranda and the like.

Nothing in the world makes Carson happier than going with his dad to Lancaster Archery Supply in Smoketown to play Technohunt — a video hunting game in which players use archery gear to shoot animals and giant insects projected on a screen.

Carson shoots a crossbow when he plays Technohunt.

And he's pretty good at it.

"Yes, he comes from a hunting family, but the social circle outside of his family is so important, especially when it is such a positive experience every time he walks through those doors" at the shop, she said.

"Chris (Scott) has been such a mentor, and now others there have followed his lead.

"We are happy that Carson has found something that he can be successful in and really enjoys. That is such an important thing for every human being."

Talk about being in the right place at the right time.

When Carson, Scott and Sharon stopped by the Hunt of a Lifetime booth at the Harrisburg show in February, the New Zealand outfitter that works with the organization was in the building.

ASJ Trophy Hunts each year donates its services to two kids who are referred to them through Hunt of a Lifetime — a Pennsylvania-based organization that sends kids and young people age 21 and under on dream hunting trips.

ASJ offers hunts for a variety of New Zealand big game, including red stag — a large deer with heavy, elklike antlers that can sport 40 points.

As Carson's luck would have it, one of the kids ASJ was planning to take hunting this year was forced to cancel.

His parents hadn't even filled out the paperwork for Hunt of a Lifetime or asked Carson's doctors if it was OK for him to fly halfway across the world four months after having a new valve put into his heart, and Carson was being signed up by ASJ.

"The outfitter wanted him, no matter what," Scott said.

The trip was scheduled for May 22-June 1.

Besides getting medical clearance and taking care of a lot of paperwork, there was a problem.

Carson is a master with the crossbow, but he had never shot a large-caliber rifle.

And he'd need to do that to take down a red stag.

Within a few weeks, Carson was shooting a .270-caliber rifle, his doctors had cleared him to fly to New Zealand and Hunt of a Lifetime had made all the travel arrangements for him and his dad.

"It was incredible how fast this all came together," Sharon said.

Understand, this is no walk in the park.

This is a big-money adventure.

With all the expenses added up, Scott figures the trip cost about $20,000.

And the Rehms didn't have to pay a dime of it.

"This is just one hunt," Sharon said. "They (Hunt of a Lifetime) do these all the time. It's an incredible organization."

(Lancaster Archery Supply raised nearly $700, through food sales at a tournament and by selling some old equipment, which was given to Carson to use as spending money while he was on his hunt.)

After flying for two days, Carson and Scott arrived in Queenstown, New Zealand, on May 23.

The next day, they were trudging through 2 feet of snow and freezing temperatures in search of red stags.

The land is rough, Scott said, with the stags hiding in thick draws running up steep mountains.

They saw a world-class fallow deer the first day out, and asked Scott if he wanted to shoot it.

Although he traveled to New Zealand on Hunt of a Lifetime's ticket, Scott was paying for his own hunt.

But he wasn't about to pull the trigger before Carson.

"They really wanted me to take that fallow, but I said, ‘Nope. Carson's first,’ ’’ Scott said. "This is his world-class hunt."

The group saw a few stags, but nothing close enough to try to shoot.

On the second day, they again were walking and glassing across vast plateaus and down into steep gullies.

They rounded a bend in one finger and spotted a good stag not too far below them in some evergreens.

Carson got his rifle set up on shooting sticks, and he took aim.

The shot was about 150 yards, and Carson hit the stag high in the shoulder with his first shot.

Judy was the designated backup shooter, since Carson's rifle only holds one round, but she missed the stag with her 7mm rifle.

So Carson's dad reloaded his son's gun and Carson shot again, anchoring the stag for good.

"I didn't need any backup," Carson said with a huge grin.

Carson admitted he was shaking when he approached the 10-year-old deer, and grabbed hold of its massive, 23-point rack.

It took two days to cape the 500-pound stag and haul it down off the mountain.

It was while the team was packing out Carson's deer the day after he shot it that Scott got the chance to take a wild Arapawa ram.

He had no interest in shooting a red stag.

But each will have his own trophy from the hunt to put in the family's new barn that's being built right now.

Once the hides and horns arrive from an expediter in New Zealand, they'll be mounted by Stoltzfus Taxidermy in Gordonville.

Carson's will be paid for by Hunt of a Lifetime.

After such an incredible adventure, Sharon and Scott said they can't believe they knew very little about Hunt of a Lifetime before this all came together.

Now they are likely to be among the organization's most vocal ambassadors.

"We can never thank them enough," Sharon said.