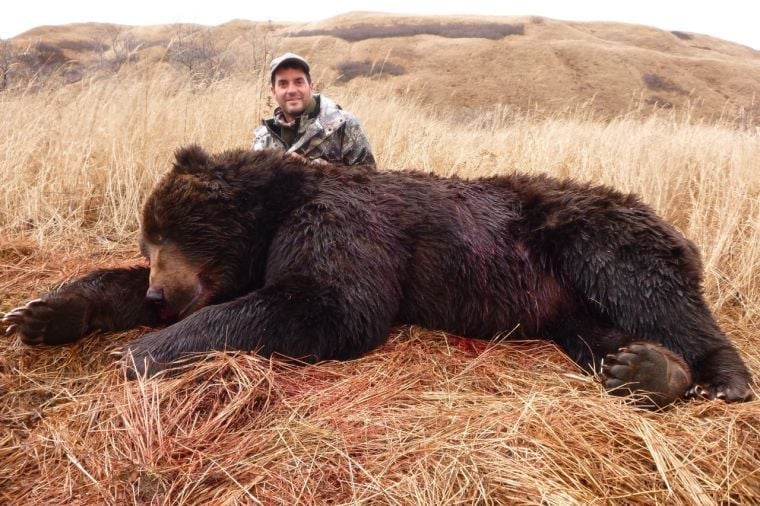 Brian Shaub, 44, of Lancaster, is dwarfed by the 1,100-pound Kodiak brown bear he shot last fall. 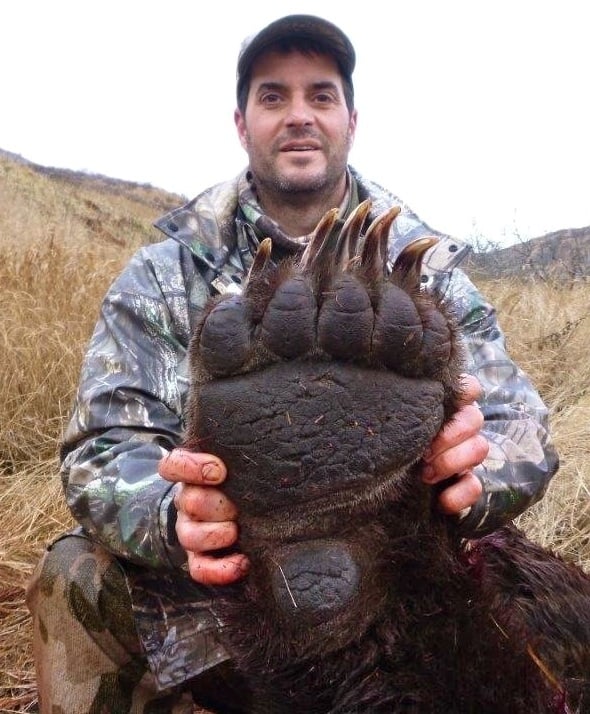 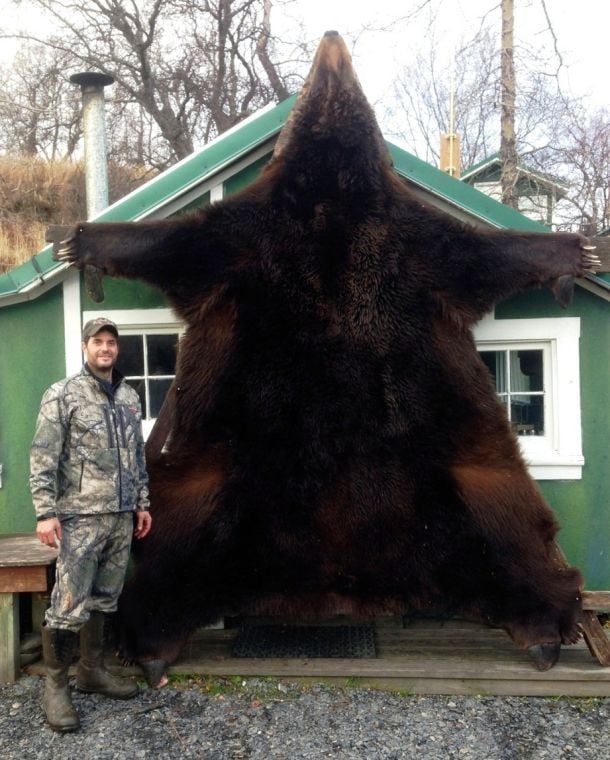 Brian Shaub's bear measured over 9 feet from nose to tail.

Brian Shaub, 44, of Lancaster, is dwarfed by the 1,100-pound Kodiak brown bear he shot last fall.

Brian Shaub's bear measured over 9 feet from nose to tail.

The polar bear is considered the biggest bear on Earth.

But it only beats out the Kodiak brown bear by a nose.

So it’s no stretch to call the Kodiak brown bear an Alpha carnivore.

Feasting annually on a protein-rich diet of salmon, Kodiaks can stand 10 feet tall and weigh more than 1,000 pounds.

Standing on all fours, a Kodiak bear’s shoulder would be near the top of a 6-foot-tall man’s head.

“They’re the biggest in the world, so I figured that’s the one I wanted to go for,” said Brian Shaub of Lancaster.

Last October, Shaub, 44, headed to Kodiak Island off the southeast coast of Alaska, to chase the island’s namesake brown bears for 13 days.

“It’s been something that I’ve wanted to do for a while,” Shaub said of his expedition.

A husband and father of three daughters, Shaub prepared for the rigors of a Kodiak Island bear hunt by spending months hiking around home with a 50-pound pack on his back.

He admitted those workouts came in handy, when, on the third day of his hunt, he and his guide, Jason Bunch, decided to hike to a secluded area four miles from their base camp.

The pair set up a spike camp there at the confluence of two rivers.

Shaub and Bunch planned to stay there in a two-man tent for five days, if necessary.

“It was pretty tight quarters,” Shaub said. “There’s basically no room to move around inside. And if it was raining, that’s where you went to get out of it.”

Shaub’s goal for the hunt was to bring home a boar that would measure 9 feet squared.

The squared measurement is derived by laying a bear’s hide flat on the ground, and adding the distances from nose to tail and from the right front paw to the left front paw.

Then you divide that total by two.

It takes a keen eye to measure up a live bear, Shaub said.

And his guide had such an eye.

On their hike to the spike camp, the pair spotted a fat boar that Bunch estimated at just over 8.5 feet squared.

Shaub said his guide wanted him to shoot that bear, which he nicknamed “Fat Boy,” but Shaub wanted to wait.

“It took all of my willpower to pass him, but it was early in the hunt and we had yet to make it to our honey hole,” Shaub said.

The next day, Shaub and Bunch looked over a big sow that they judged to be over 9 feet.

Since it was a female, though, it was given a pass.

As the pair slept in their tiny tent the following night, Shaub was awakened by a sound he identified as a bear breathing right next to his head, just outside.

“Having the world’s largest carnivore circle your tent in the darkness makes you question your decision to pursue dangerous game,” Shaub said.

“Panic set in as I realized my rifle was outside the tent in the vestibule, not that it would be of great use in the dark.”

Shaub woke his guide and apprised him of the situation.

“His reply was, ‘Don’t get eaten,’" Shaub said. “He promptly rolled over and went back to sleep, seemingly unconcerned.”

Two days later, on Nov. 1, Shaub and Bunch were watching an 8-foot bear fishing in a river.

Suddenly, the bear burst out of the water and sprinted across a flat, before turning around and staring back at the river.

A large bear soon appeared, spotted his rival and proceeded to chase the 8-footer up the mountain and out of sight.

Shaub knew the big bear was a shooter the second he laid eyes on it.

“It was so much bigger than the other one, and we knew that one was 8 feet,” he said.

As Shaub wondered if he’d missed his chance at a monster bear, the boar strolled back down to the river to hunt for salmon.

Shaub and Bunch got into position ahead of the boar, which fed to within 100 yards.

It was there that Shaub anchored the boar with bullets from his .338 Winchester Magnum, custom-built by Bansner’s Ultimate Rifles in Adamstown.

“Shooting the bear was really just a small part of the whole adventure,” Shaub said. “There was so much more to it than that.”

The big boar’s front pads measured 8.5 inches across, and Bunch guessed the animal would square at over 10 feet.

It took the two men all of the next day to haul their gear and Shaub’s trophy back to their main camp, and then all of the following day to properly treat the hide.

It hasn’t been officially scored yet, Shaub said, but he expects the dried measurement to exceed the 28-inch minimum required for recognition by the Boone & Crockett Club’s records program.

Officials with the Alaska Department of Fish and Game told Shaub his bear was 16 to18 years old and had a live weight of about 1,100 pounds.

“They told me they really don’t get any bigger than that, so they said I can quit,” Shaub said. “I probably won’t hunt brown bears again.”