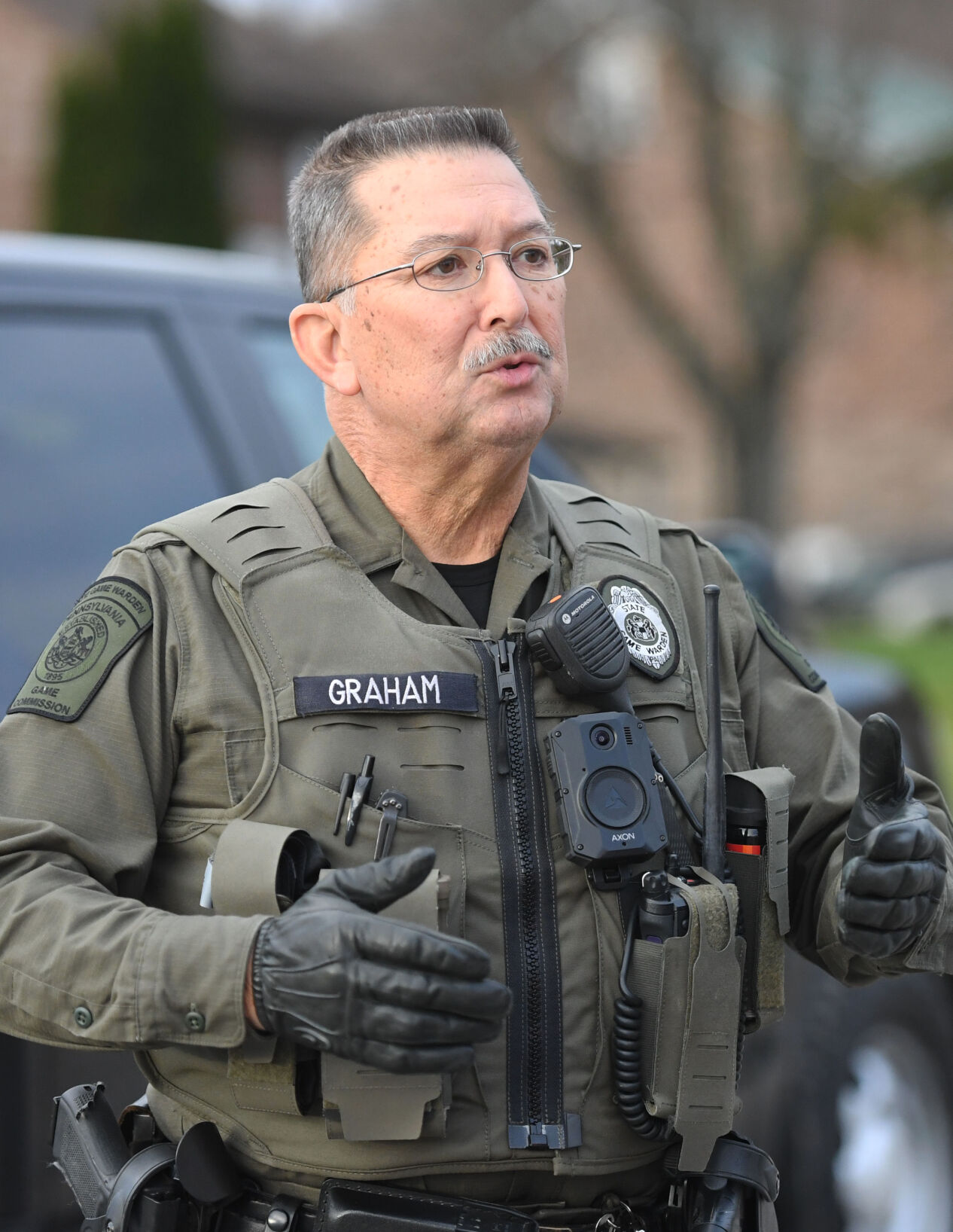 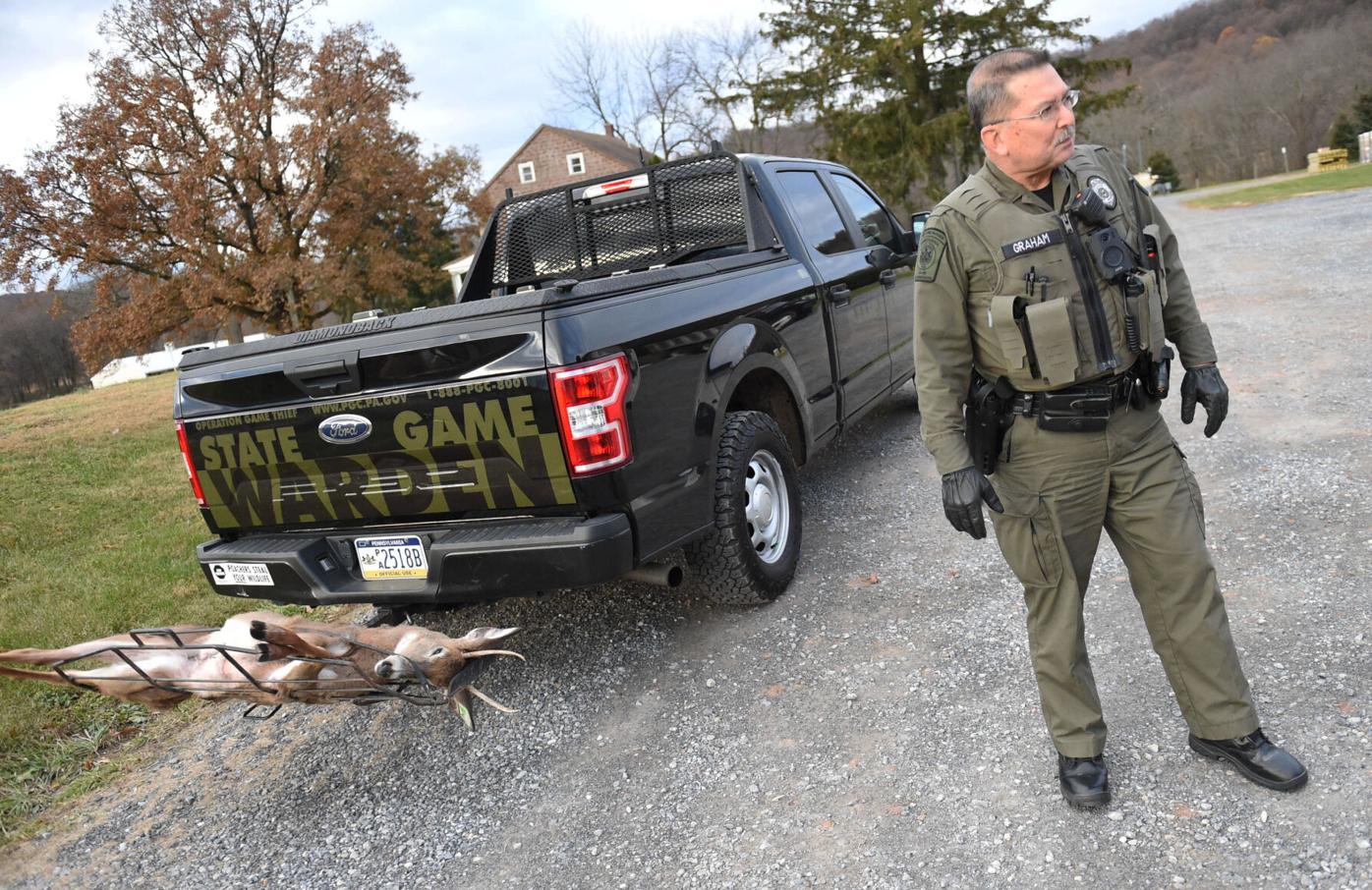 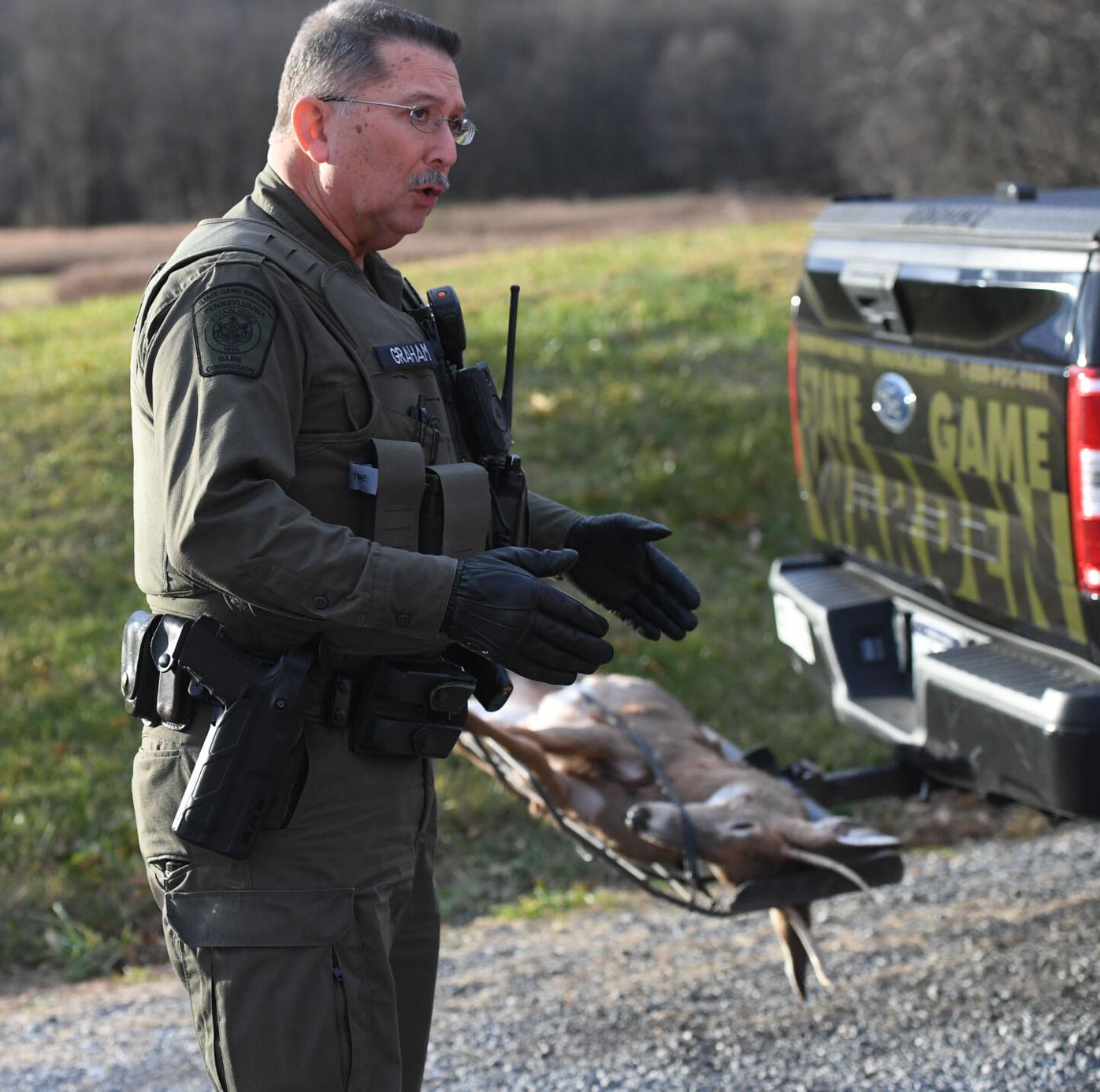 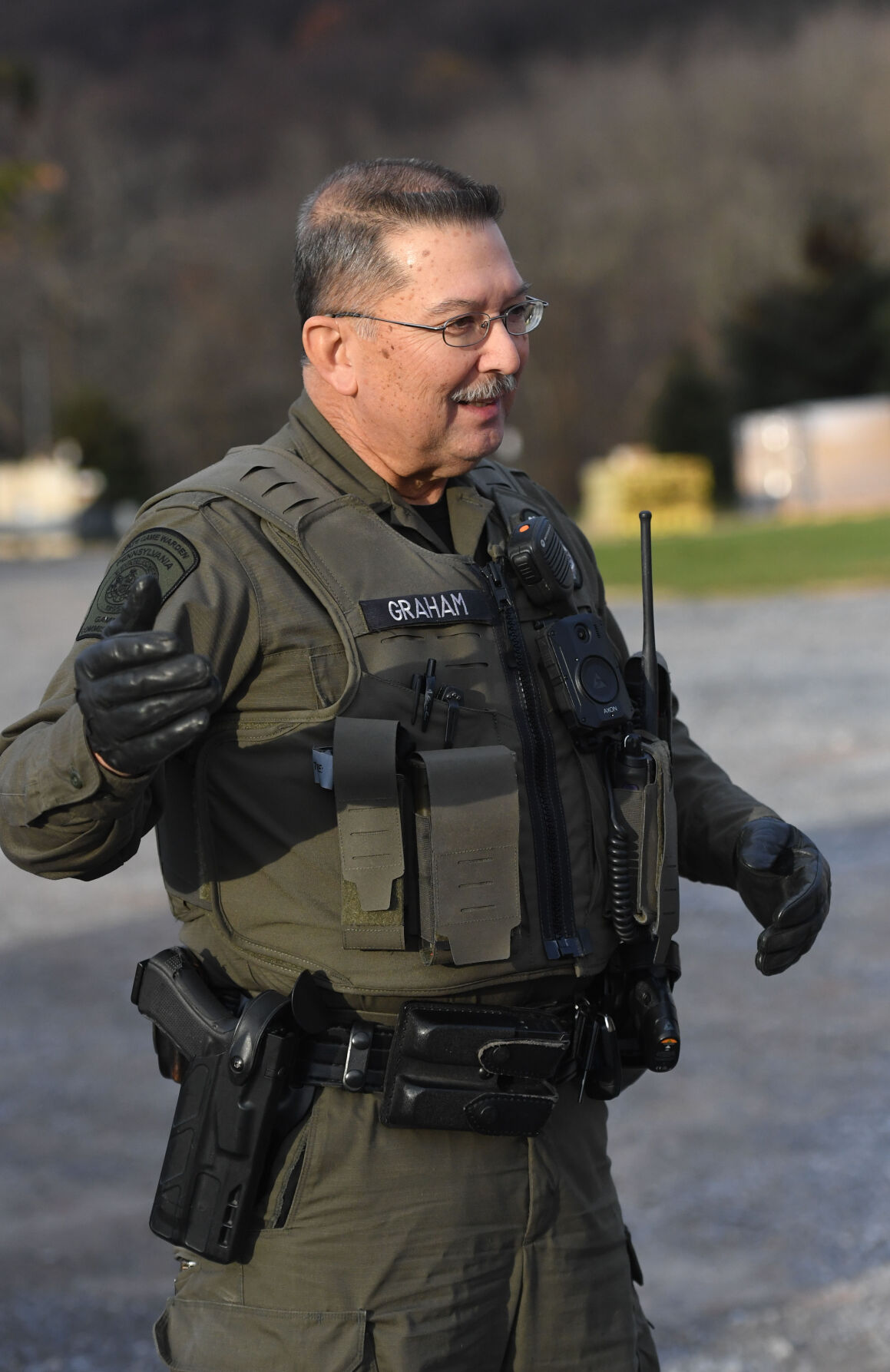 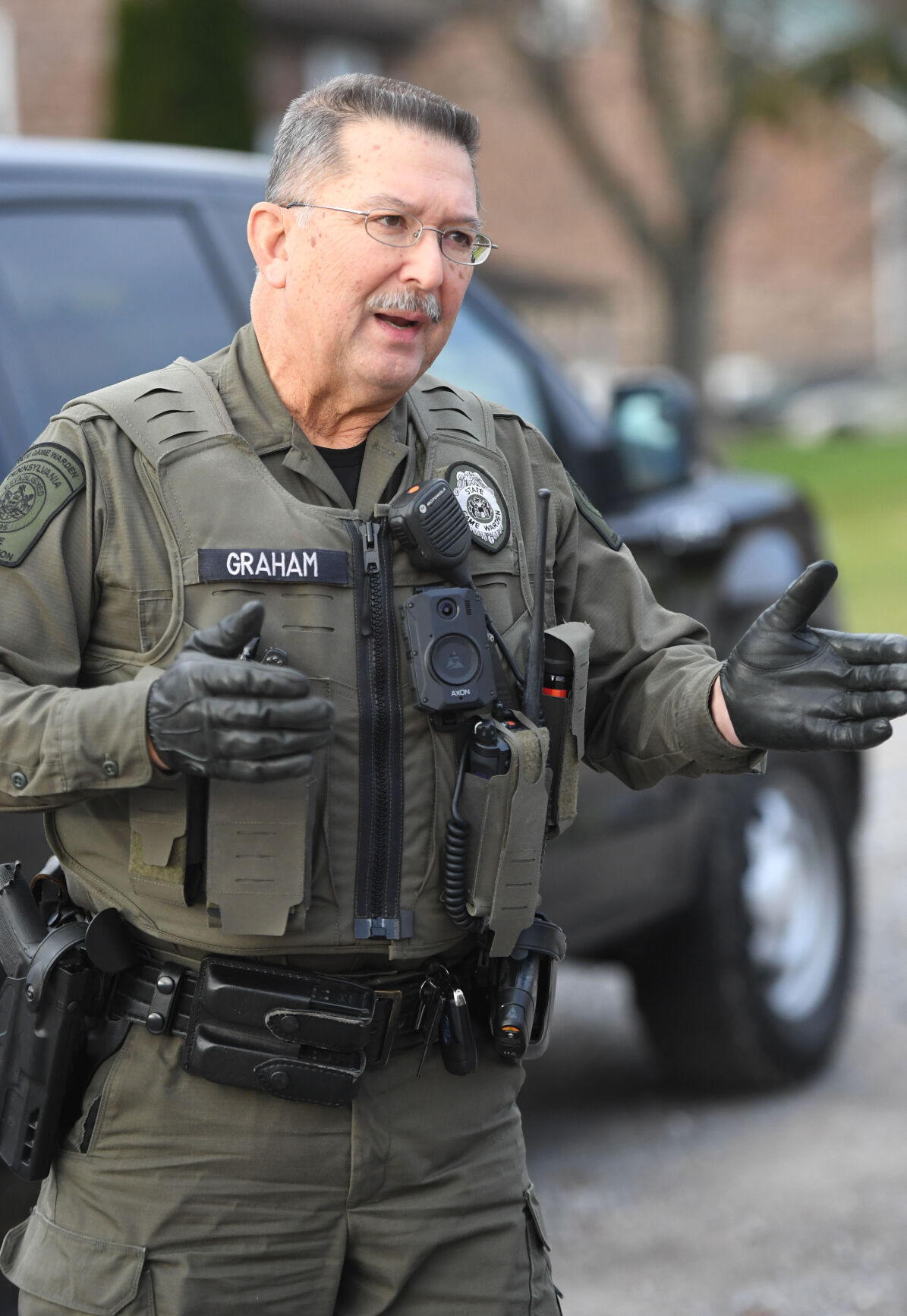 A deputy warden spotted him coming out of the woods — a man in a bright orange hat was carrying a rifle with a pistol on his waist as he made his way toward a parking lot at Middle Creek Wildlife Management Area.

It was shortly after lunchtime Saturday, the first day of Pennsylvania’s firearms deer hunting season, when gun-toting sportsmen were a common sight in the popular hunting area.

But the man with the rifle didn’t have a hunting license. In fact, he said he had no intent to bag a deer, claiming he was simply taking a walk with his guns.

It was an explanation that state Game Warden Greg Graham had a hard time believing when he arrived to assist his deputy.

“You look like a hunter. You're dressed like a hunter. By definition, you are a hunter,” Graham said, later explaining to the man that a citation would be filed.

By that time, Graham had been out for hours, patrolling his district, which stretches for several hundred square miles in northeastern Lancaster County.

This year, the regular firearms season is slated to run through Dec. 11, and is open every day except for Sunday, Dec. 5.

The opener of the state’s firearms deer season is usually one of the busiest days of the year, he said. And this year, he let an LNP | LancasterOnline reporter tag along.

“All in all, this is kind of a quiet morning for me,” said Graham, 62, who has been an officer with the Pennsylvania Game Commission for 28 years.

It was already after 11 a.m. when Graham gave that assessment, as he was driving his pickup truck in Sadsbury Township.

There, he was checking a private property after it was reported that hunters may have been illegally trespassing on the land, likely to access a wooded area that could be home to deer.

Though he didn’t find any trespassers, Graham said the call was a pretty normal example of the work he does during the season.

Earlier in the morning, he pulled over to a parking area outside of State Game Lands 52 in Brecknock Township, where a group of orange-clad hunters stood near their vehicles.

Graham asked the hunters to see their licenses, verifying that they were properly permitted before answering some questions. None of them had bagged a deer, but if they had, Graham said he would have checked to make sure the animals were properly tagged — also typical work, he said.

“Generally, compliance is excellent,” he said.

Not all of his duties are as innocuous. He is law enforcement, and his authority goes beyond policing only incidents related to hunting and wildlife.

“All of the stuff that might occur in a city, we have here,” Graham said, noting specifically that the Middle Creek area seems to be a “magnet” for crime, likely due to its popularity.

On Saturday, Graham recounted recent, “significant” arrests, which were made after he discovered a number of people in possession of marijuana and methamphetamine.

Though game wardens sometimes work alongside other law enforcement agencies, Graham said most calls can be handled in house. He made sure to point out his equipment, which included handcuffs and a Taser among other items typically carried by police.

After all, policing hunting grounds often means that most people game wardens come in contact with are armed with guns and knives, Graham said. And the remote, rural locations Graham patrols are sometimes ideal locations for crime, he said.

Sometimes, the job can be dangerous.

Graham recalled fearing for his life when a suspect hit him with a vehicle and seemingly tried to run him over as he was responding to a case in a remote parking area.

Another time, a suspect challenged Graham to a fist fight, he said, describing the incident as one of the few in which he had to draw his firearm. Graham said he’s never fired at a suspect.

Mostly, however, Graham spoke about hunting violations, telling tales of a college-age poacher who illegally took upward of 20 deer, as well as a time he caught multiple people shooting from vehicles at a deer decoy while working in York County.

Nothing as exciting or harrowing took place before 2 p.m. Saturday in Graham’s district.

Transporting loaded firearms in vehicles is prohibited, Graham said, pointing out their potential to accidentally discharge. Holes have been blown through vehicle floors and passengers have been injured that way in the past, he said.

Early Saturday, Graham spotted an SUV circling multiple times past popular hunting spots and wondered aloud about whether the driver might be trying to hunt from his vehicle.

“If you were really interested in hunting, you’d be in the woods right now, not driving around,” he said.

On Saturday morning, Graham had not made contact with a single hunter with a successful kill, and many of the sportsmen who he spoke with reported a slow day with no sightings.

Occasionally, Graham would pull over to peer through binoculars to examine hunters at a distance. Once, he stopped a couple of pedestrians, encouraging them to wear bright orange as they walked a road near hunter-occupied woods.

“There is no such thing as being too safe,” Graham said.

About midday, Graham visited a Caernarvon Township home to pick up a spike buck that a hunter had shot and killed, mistaking it for a doe. The hunter had reported the mistake himself.

The buck had only one antler, with the other broken off, and the hunter told Graham that he simply couldn’t see it.

Similar mistakes are common during all of the state’s deer seasons, Graham said, adding that they should always be self-reported — a process that often doesn’t lead to penalties beyond losing the deer and paying a $25 restitution fee. In this case, the hunter was even reissued a tag.

The seized deer, Graham said, will be distributed to a local family who can make use of the meat.

Crimes and game law violations happen all year, not just during the state’s hunting seasons, Graham said. And he was unable to think of a single remarkable case from a past firearms opener.

Graham said he’d likely be out into the evening, if not later into the night Saturday.

To him, the most notable first-day stories stem from the times he’s seen young, first-time hunters who have successfully bagged and tagged a deer.

“That’s an experience he is going to remember for the rest of his life,” Graham said, happy to be a part of it.

You can’t help but notice it this time of year: the carcasses of deer strewn on roadsides or…

Axel, a Lancaster city police dog, was remembered Thursday as a goofy, friendly companion who loved attention, including pats on the head.

Many PA deer hunters say they miss gun season opening on the Monday after Thanksgiving, which afforded them the chance for a relaxing weekend at camp ahead of the big day.