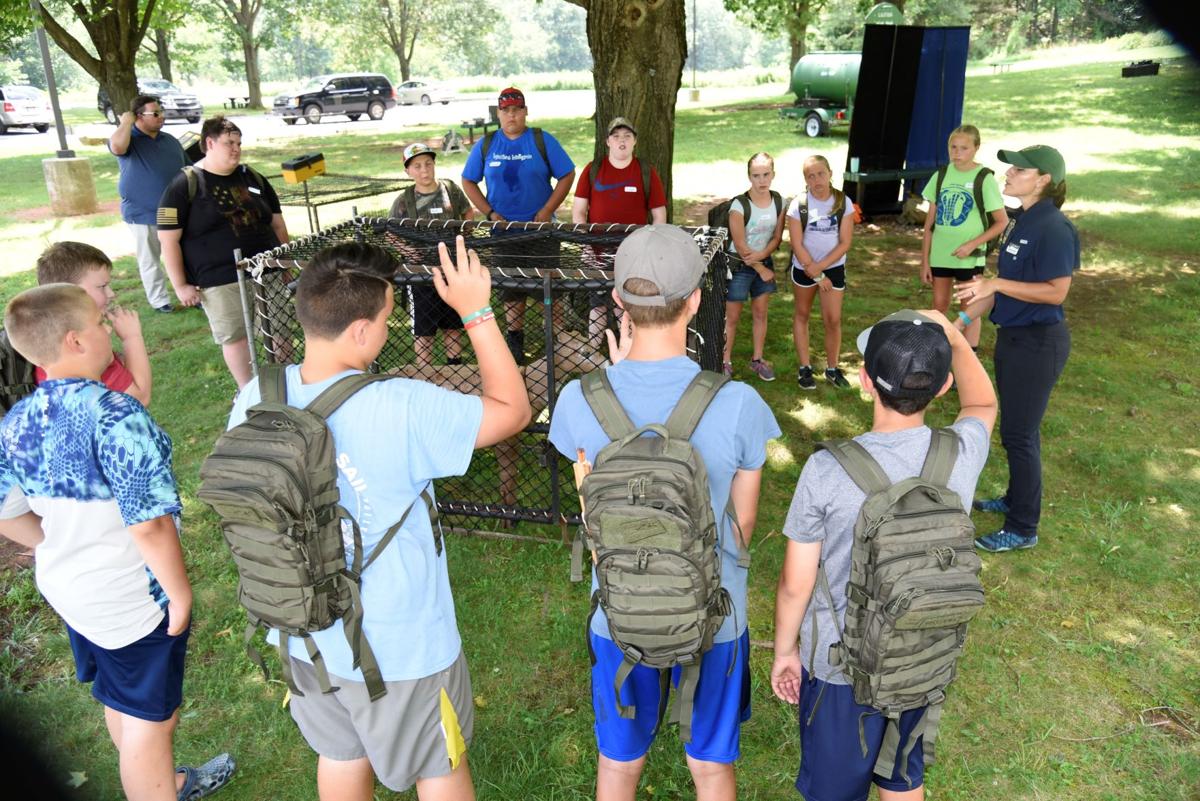 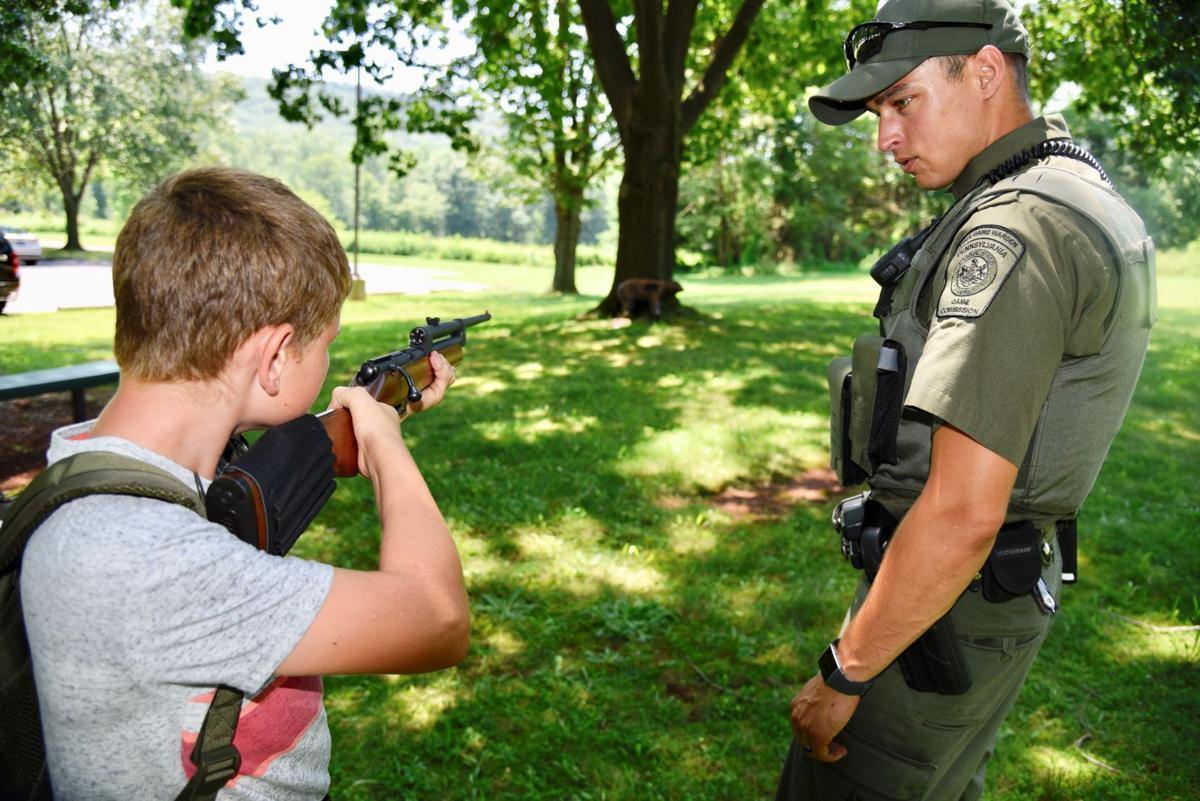 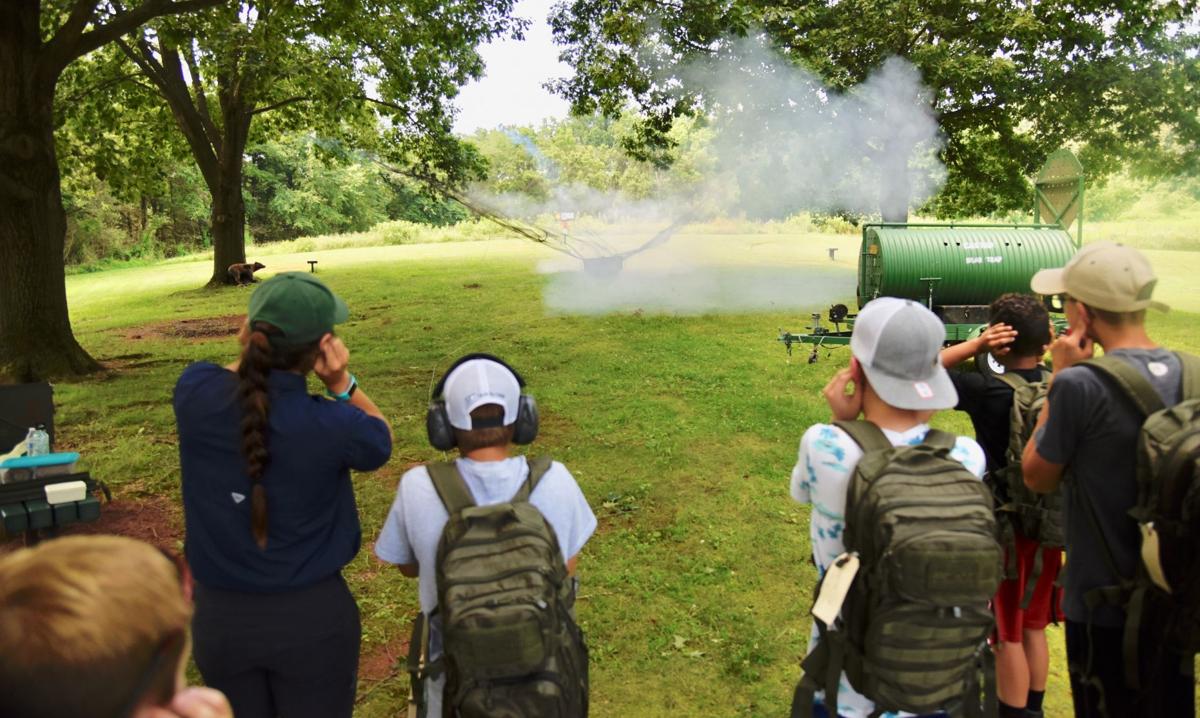 With fingers in their ears to muffle the explosion, youths watch a rocket net shoot from the ground at the Junior Game Warden Camp at Middle Creek on July 19.

But 25 boys and girls age 11-15 found out in a very hands-on way recently in the first-ever Junior Game Warden Camp at the Pennsylvania Game Commission’s Middle Creek Wildlife Management Area.

Each got to shoot real tranquilizer darts — minus 2-inch-long needles —from a rifle at a foam bear, a pretty darn true-to-life simulation of what game wardens do when they have to subdue a nuisance black bear and relocate it in a remote woods.

They got to stick their fingers in their ears while one lucky boy used a remote control to send a rocket net skyward, within a few seconds ensnaring two fake turkeys. Game wardens do that, too, when they want to release wild turkeys into areas of the state to boost their numbers.

“I literally saw my life flash in front of my eyes,” one wide-eyed participant exclaimed after the huge net exploded out of the ground with a cherry bomb-like concussion.

The favorite part for Gabe Goodman, a 13-year-old homeschooled boy from Elizabethtown, was the forensics station, where the group sifted through a pretend crime scene where somebody had shot a deer illegally. With the help of some of the dozen game wardens at the camp, the group examined boot prints in the mud, car tracks and recovered a shotgun shell as part of evidence gathering.

Forensics work also stood out for Luke Turner, 14, who goes to Mount Calvary Christian School in Elizabethtown. “I thought it was cool to learn about how they go about catching a poacher or an illegal campsite (on game lands),” he said.

At another station, the youths were shown how game wardens track people lost in game lands or criminals on the run.

“A lot of people don’t really know who the Game Commission is so this is a great opportunity to tell them who we are,” said Lauren Ferreri, a wildlife biologist and manager of Middle Creek. She demonstrated to the kids from seven counties traps the agency uses to capture live deer and waterfowl in water for research and to assess the health of their populations.

Such research has found deer that traveled more than 40 miles and ducks that lived more than 20 years.

Ferreri’s husband ,Steve, a game warden, showed the use of a culvert-like bear trap to catch nuisance bears. The participants chuckled to learn that doughnuts are the bait of choice. Greg Graham, a Lancaster County game warden, has helped catch three wayward bears in Lancaster County in recent years, including one that weighed 550 pounds.

Being a game warden is hardly about just enforcing hunting and trapping regulations. The agency is responsible for the well-being of 480 species of birds and animals in the state. Only 10 percent of those species are hunted or trapped.

“Even if they decide not to become a game warden, it’s really good exposure for them. A lot of people don’t hunt or fish anymore. This is another reason just to kind of showcase all the different things we do,” Lauren Ferreri said.

“We wanted to give them some insight into what we do, how we do it and why we do it,” added Dustin Stoner of the Game Commission. He noted the camps — a second one was held in Centre County — were the idea of Charles Fox, a game commissioner in Bradford County.

Like many law-enforcement agencies around the country, the Game Commission has experienced a decline in game warden candidates in recent decades.

Ferreri was pleased to see three girls in the group interested in wildlife conservation. “The females in this field are really starting to go up,” she observed.

It’s possible more Junior Game Warden Camps could be funded in the future.

If you enjoyed yesterday's weather, today's conditions will be relatively similar.

Just one more time. One last time. But not yet.

Update 10:15 a.m. — The elusive black bear of Lancaster city has finally been caught.

One of the nice things about summertime is that, like the George Gershwin song says, “the livin’ is easy.”

Even if you don’t know a birdwatching life list from a life preserver, you may find Lancaster County’s first Bird-A-Thon on Sunday, Sept. 22, …