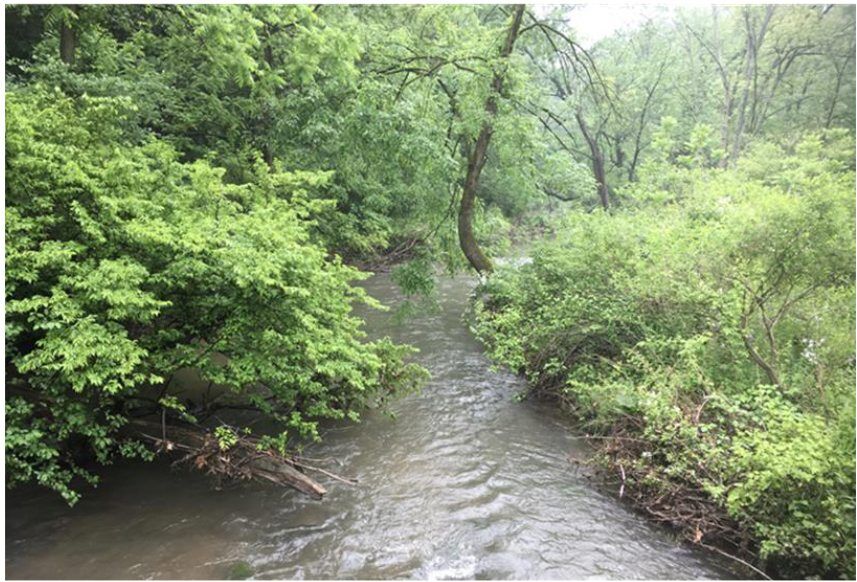 This wooded, scenic section of Hammer Creek shows its potential to be a blue-ribbon wild trout fishery. 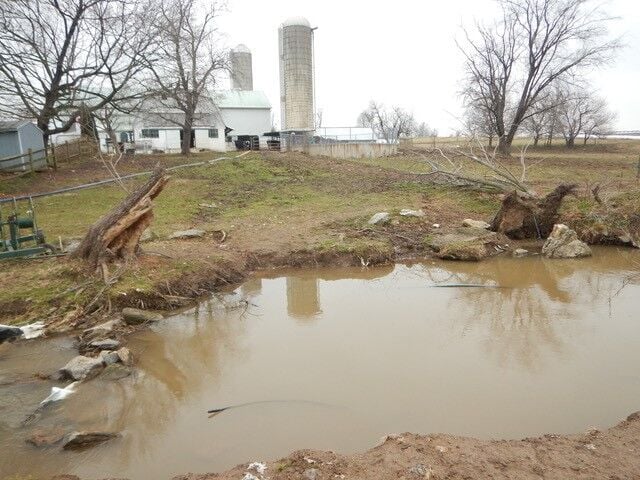 A new state plan to restore the headwaters of Hammer Creek hopes to correct soil runoff from farms. 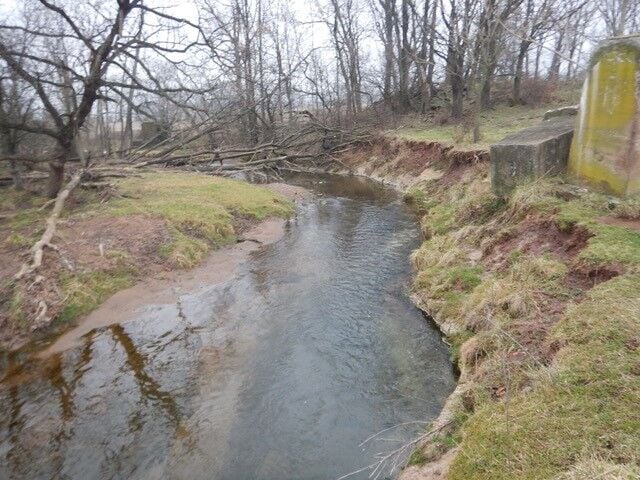 This wooded, scenic section of Hammer Creek shows its potential to be a blue-ribbon wild trout fishery.

A new state plan to restore the headwaters of Hammer Creek hopes to correct soil runoff from farms.

What do the draining of Speedwell Forge Lake in 2011 and the possibility of a rare wild trout fishery in Lancaster County have in common?

After years of environmental insults and controversy surrounding the stream, the state and two local Trout Unlimited groups have drawn up a nine-year, $5.2 million plan to reduce agriculture runoff in the headwaters of Hammer Creek by 51%. That’s 3.7 million pounds of silt a year that is preventing the Hammer’s wild brook and rainbow trout from flourishing and will again threaten to fill up the popular Speedwell Forge Lake.

“I would say that this is a special stream in a part of the state without a lot of streams with great wild trout potential. I really think we can have thriving agriculture and a great trout stream and that’s what we are after here,” said Mike Morris, a water program specialist who largely put the plan together for the state Department of Environmental Protection.

“It’s a big lift at this point, but there are a lot of people interested,” said Shaun McAdams, a stream restoration specialist with Pennsylvania Trout Unlimited, a key partner with DEP in the project. “There is never a silver bullet to get these stream segments to where they should be. It will require a holistic approach.”

A public comment period on the project was favorable and the U.S. Environmental Protection Agency has just added its required approval.

The restoration plan, which covers a 13-square-mile area that includes Schaefferstown in Lebanon County, started to take shape after the headwaters section of Hammer Creek was found by DEP to be impaired for aquatic life in 2018.

Sedimentation was found to be the main problem and agriculture its cause. Some 60% of the headwaters region is farmed. Silt destroys bottom habitat required by many organisms to survive, including the underwater insects trout need to survive. Stormwater runoff from Schaefferstown is another ongoing problem.

The Doc Fritchey Chapter of Trout Unlimited in the Harrisburg area and the Donegal Chapter of Trout Unlimited in Lancaster County will work with willing landowners to allow a toolbox of conservation measures to plug runoff and improve Hammer Creek. That will take place not just in the 19 miles of the Hammer and tributaries in the headwaters area of Lebanon County, but also another 4.5 miles downstream in Lancaster County that ends at Speedwell Forge Lake.

The key best-management practices, as they are called, are precision grass filter strips to trap sediment runoff in channels that form in crop fields, conservation tillage such as no-till, forested buffers along both sides of streams and repairing stream banks.

Nearly 25% of the sediment-reducing targets can be accomplished merely by getting farmers to adopt and implement erosion and sediment-control plans that have long been required by the state. Having farmers draw up and use the plans is called “critical” by DEP.

A variety of state, federal and private funding is being sought to pay for planned conservation measures that landowners would allow. No land would be taken from farmers, though they would need to collectively allow 62 acres of cropland taken out of service for streamside buffers and 99 acres of hay and pasture fields. Depending on funding, farmers would be compensated for taking property out of production.

Project leaders say preliminary meetings with about 70 landowners have been promising, including the owner of the largest farm operation in the area. Significant streambank fencing is planned there to keep livestock out of streams, as well as stream restoration measures.

“It’s going to be pretty awesome if we can get some stuff implemented,” said Greg Wilson, a Lititz resident and co-chair of the conservation committee of Donegal Trout Unlimited.

In addition to improving the water quality of Hammer Creek to required standards, a big goal of the headwaters plan is to elevate Hammer Creek to one of the best wild trout fisheries in the eastern part of the state.

The ingredients are already there: limestone springs and cool groundwater to help trout survive the summer water temperatures, a fairly steep gradient section through the Furnace Hills, long sections through wooded areas open to the public through the Pennsylvania Game Commission and Camp Mack, and some tributaries designated as high quality for coldwater fish such as trout and sculpins.

Local flyfishers have known and DEP has confirmed that wild reproducing brook trout —Pennsylvania’s declining state fish —grow in part of Hammer Creek and its tributaries. Some rainbow trout from stocked fish now reproduce in the cleanest, coolest waterways.

The watershed’s serious silt problems prevent the trout from establishing larger populations and inhabiting the main stem of the Hammer. Local fans of wild trout groan each spring when stocked trout are placed in Hammer Creek and wild trout are removed, often without the angler even realizing it.

“The whole kitchen sink has been thrown at these brook trout and somehow they are still holding on. I’m incredibly excited at what we can do for the watershed with the project. It can be a huge gamechanger,” said Dr. James Soleski, a Doc Fritchey Trout Unlimited member who is working on the restoration project.

Speedwell Forge Lake, a popular recreation lake owned by the Pennsylvania Fish and Boat Commission, was abruptly shut down and drained in 2011 when its dam was ruled unsafe.

Already by that time, the lake had been filling with sediment, presenting problems to boaters and a healthy fish population. Also, because the lake was no longer effectively trapping sediment, slugs would flush during storms into the Susquehanna River and Chesapeake Bay.

Some recommended that the lake stay drained and allow the Hammer to be free flowing. But the dam was repaired and some sediment removed at a cost of $4 million. The lake was closed for five years.

The lake is again filling with sediment washed down the Hammer and will eventually fill the lake if unabated, the Hammer Creek restoration plan says.

The Speedwell Forge Lake dam episode is not the only pollution problem to arise on the Hammer.

Heidelberg Township, in Lebanon County, in the 1970s proposed building a new sewage plant that would discharge wastewater into Hammer Creek. But a part of the stream at the time was rated high quality. DEP refused to allow it.

When the township then proposed to discharge waters into Furnace Run, a wild trout stream in Lancaster County, Lancaster County Commissioners protested and a group of Conestoga Valley High school students found macroinvertebrate bugs proving it was a high-quality waterway also. The plan was dropped.

Next, township supervisors challenged DEP’s classification of the upper Hammer as a high-quality waterway. Despite alternate studies provided by the Chesapeake Bay Foundation, DEP downgraded the quality of the stream in 2010. However, the threat to the watershed ended when the township chose instead to send its sewage to Lebanon city’s sewage treatment plant.

The 2020 PA buck kill was the highest in 15 years, and coincided with a spike in license sales; biologists explain the reasoning behind the 2021 elk license allocation; and a look at approved and planned firearms changes in Southeast PA.

Researchers are studying the interactions between cows and elk in spaces where their ranges overlap.

“I can tell you, it wasn’t fair that this is the way Vince retired.”

With a hardhat atop his head, Kevin Erb stood at a project site Friday afternoon, gesturing to show off a field of newly planted greenery cove…

Five years after installing a riparian buffer on his farm, John Young is already seeing changes — and not just in the health of the stream on his land.

Flowing through history: A look at the Conestoga River through Lancaster County's history [photos, video]

A kayaker gliding along the Conestoga River through Lancaster city might encounter a few fishermen, some birds and maybe other kayakers, but t…