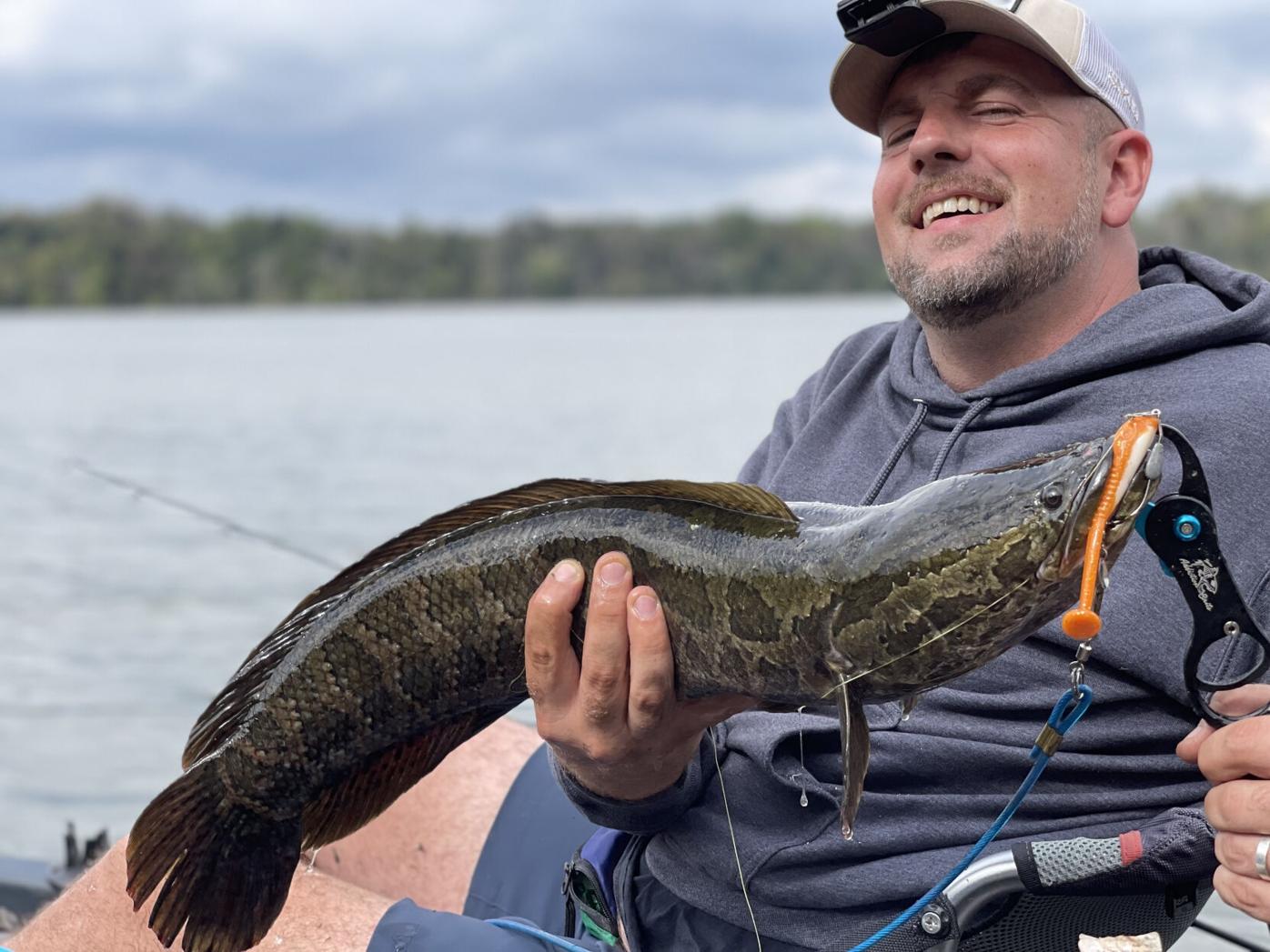 Jesse Goodroe, co-owner of Goodlines Lure Co., shows off a snakehead he caught Oct. 9 in a small bay near Perryville Community Park. That’s in Maryland, roughly 10 miles down the Susquehanna River from the Conowingo Dam in the somewhat nebulous area where the Susquehanna becomes part of The Chesapeake Bay. Goodroe and co-owner Steve Lines decided to fish there even though the Port Deposit Snakehead Tournament they were sponsoring that windy day was postponed until Spring. The two started their company with a focus on brightly colored options that would appeal to snakeheads. “They like flash, big movement and heavy vibrations,” Goodroe said. 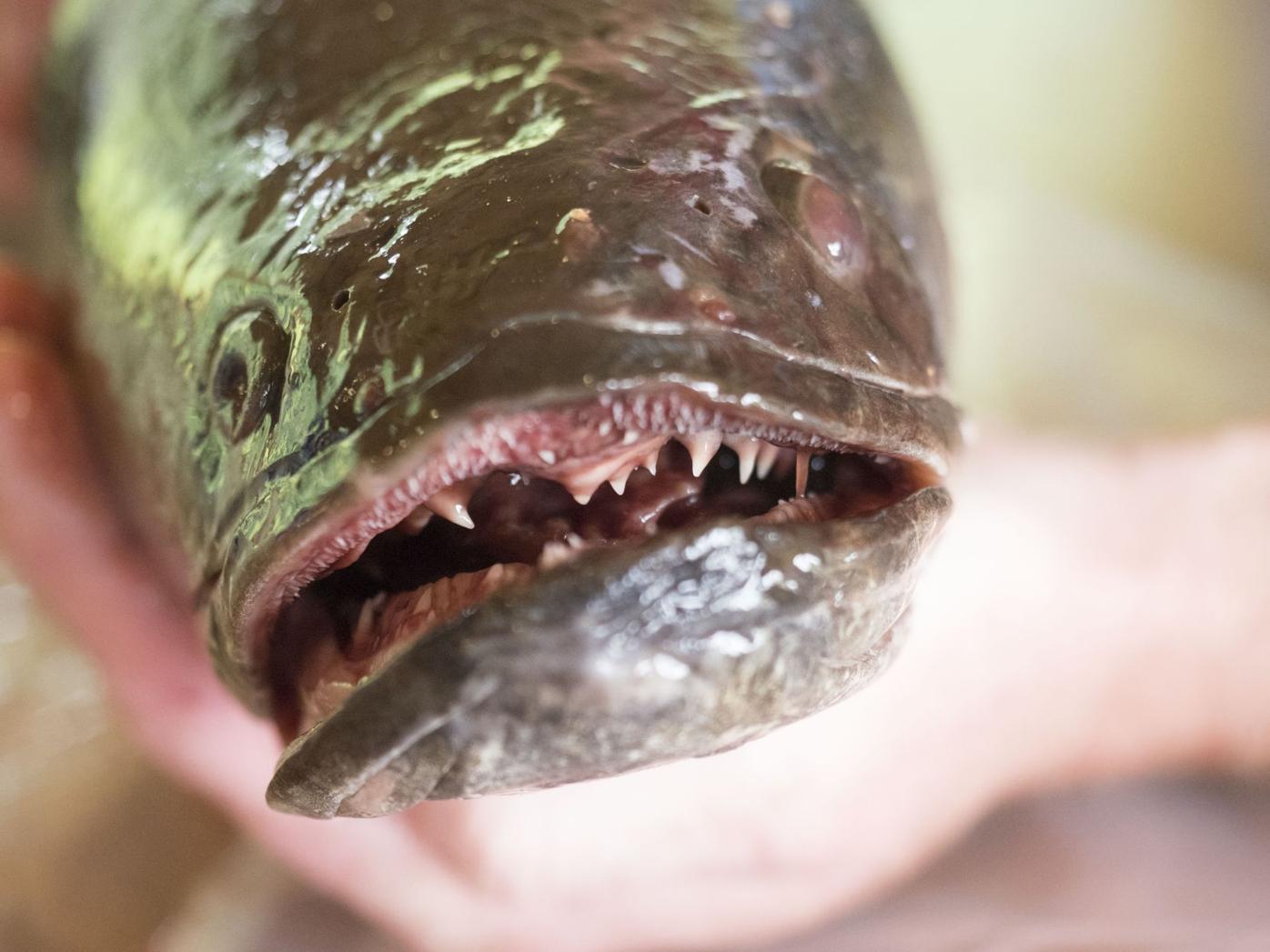 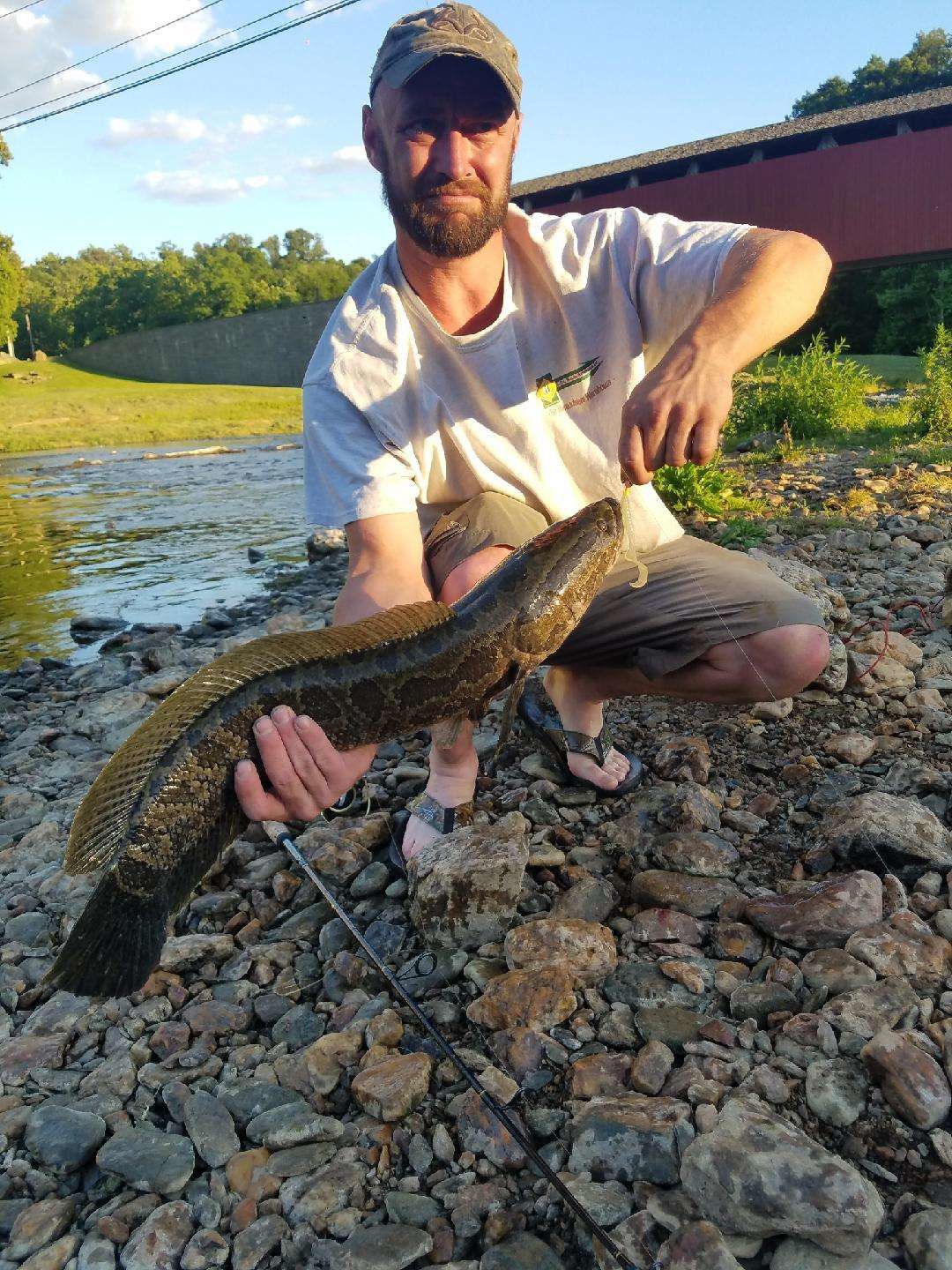 Jesse Goodroe, co-owner of Goodlines Lure Co., shows off a snakehead he caught Oct. 9 in a small bay near Perryville Community Park. That’s in Maryland, roughly 10 miles down the Susquehanna River from the Conowingo Dam in the somewhat nebulous area where the Susquehanna becomes part of The Chesapeake Bay. Goodroe and co-owner Steve Lines decided to fish there even though the Port Deposit Snakehead Tournament they were sponsoring that windy day was postponed until Spring. The two started their company with a focus on brightly colored options that would appeal to snakeheads. “They like flash, big movement and heavy vibrations,” Goodroe said.

Nearly 1,000 northern snakeheads were caught this year in fish lifts at the hydroelectric Conowingo Dam in Maryland.

They are the aggressive, predatory fish with bodies that reflect their name and razor-sharp teeth inside mouths that gulp air.

The Conowingo, spanning the Susquehanna River five miles from Lancaster County’s southern border, is considered a battleline of sorts against this invasive species’ advance on Pennsylvania.

A small number of snakeheads -- sometimes called “frankenfish” -- have breached the line. That they’ve gathered en masse at the dam is not lost on people like Dan Berlin, who is organizing the first snakehead fishing tournament in Cecil County, Md. The tournament, which was likely to draw anglers from Pennsylvania, had been set for Saturday in Port Deposit, where Berlin serves on town council. It was canceled after a small watercraft advisory was issued for the river and is rescheduled for spring. Pushing the tournament much later would mean snakeheads wouldn’t be biting, said Berlin, who views the tournament as an opportunity to promote snakehead fishing.

“They like flash, big movement and heavy vibrations,” said Maryland fisherman Jesse Goodroe, who started Goodlines Lure Co. with partner Steve Lines. The company, which is a sponsor of the Port Deposit tournament, focuses on brightly colored lures that appeal to snakeheads.

Goodroe and Lines decided to fish not far from Port Deposit on Saturday, despite the watercraft advisory and canceled tournament. The wind made it tricky, said Goodroe, but he landed a snakehead that he said made the trip worthwhile in a small, set-back bay near Perryville Community Park, about 10 miles down the Susquehanna from the Conowingo in the somewhat nebulous area where the river becomes part of the Chesapeake Bay.

The way Berlin sees it, the more lines that go in the water, the more snakeheads that come out.

“They need to get on it in Pennsylvania,” he said. “Now, if you only want to be fishing for snakeheads in 20 years? Then don’t.”

Snakeheads breached the Conowingo in May 2020, during the annual American shad spawning migration. Lifts at the dam have traditionally assisted shad on their journey upriver. Dam workers started the lifts late due to COVID-19. When they finally started, during four days of watching migrating shad stragglers, operators spotted 35 northern snakeheads, said Mike Parker, spokesman for the Pennsylvania Fish and Boat Commission.

Fourteen were netted and removed. The other 21 made it into the Conowingo Pool, he said, but two were later located and removed. It’s presumed the other 19 kept swimming.

Instead, about 6,400 American shad captured at the Conowingo were transported by truck to the Columbia Access and released into the Susquehanna, he said.

Parker said his latest 2021 Conowingo Fish Lift figures show 952 Northern snakeheads were caught along with 1,098 flathead catfish (a species native to the Western part of Pennsylvania but not the Susquehanna.) All of those were either killed or given to the Maryland Department of Natural Resources for beneficial use or research, he said.

According to the U.S. Geological Survey, a female snakehead lays about 1,300 to 1,500 eggs on a floating nest. She can do that a few times each year. Both snakehead parents guard the eggs and continue to guard the hatched fry for weeks, according to the USGS. It’s unknown how many of the 19 snakeheads that made it north were female.

“There is no data to suggest any noticeable impact on other species in the river due to the presumed population of northern snakeheads that may have been established in 2020,” Parker said. “It may be too early to tell, but we have not yet received any substantiated reports that anglers have been observing or catching snakeheads in the Conowingo Pool or upriver.”

How did they get here?

Native to China, Russia and Korea, USGS says snakeheads may have been introduced to the United States by aquarium hobbyists or someone looking to grow a food source. USGS considers the species now established in Delaware, Virginia, Maryland, Pennsylvania, New York, New Jersey and Arkansas, with additional sporadic snakeheads in California, Florida, Illinois, Massachusetts and North Carolina.

Northern snakeheads were first confirmed in Pennsylvania in 2004 in a 17-acre lake in Philadelphia County near the Schuylkill and Delaware rivers, two years after Maryland’s first confirmed catch in a pond near Crofton.

Amanda Bean, who lives near Buck outside Quarryville, has chased snakeheads near Port Deposit before – from shore.

“They lie in the shallow water, and you’ll see them trucking along, almost like a shark the way they’re swimming and moving,” she said. They don’t mess around, said Bean, describing one particular snakehead she and some friends cooked over a campfire.

“We cut open its belly and it had a whole, full-size shad in it,” she said.

Snakeheads aren’t pretty but they are tasty, she said.

“I try not to think about what it looked like when it was alive,” she added. “But it’s really good. It’s a thick, sloppy, moist fish and it takes on flavor really well. We’ve done it on the grill. We’ve cut it up into nuggets in the air fryer.”

The one with the shad came from a spot not far from where the Octoraro Creek flows into the Susquehanna.

Fish that leave the Susquehanna and follow the Octoraro upstream would travel beneath abandoned railroad bridges and under Route 1. They’d cross into Pennsylvania, loop briefly back into Maryland then head back in, moving past a chromite mine, forest and farms. Swimming along the border of Lancaster and Chester counties, the fish would go below Route 272 near Nottingham and – more than 20 miles after leaving the river – would reach the Pine Grove Covered Bridge in Little Britain Township: where Lancaster County’s first confirmed snakehead was caught in 2018.

Snakehead sightings in Octoraro Lake beyond that bridge didn’t immediately follow. But Jim Neary – who sells bait and rents boats on the Lancaster County side of the Octoraro shore – said a couple snakeheads were caught in that lake last year and eight or nine were hauled out this summer.

Some speculate the fish actually managed to make it up and over not only the spillway near the covered bridge but also over the 45-foot dam between that and the lake. Neary’s not buying that. Others suggest eagles with bad grips were involved. Everyone has a theory, Neary said. His is that someone purposely released them to ensure themselves future fishing adventures.

“I think somebody may have caught them by the bridge, put them in a bait bucket, thought, ‘We’ll throw them in the lake’ and dumped them ...,” he said. “Snakehead fishing is at a fever pitch right now.”

Neary sells bait that would appeal to snakehead fishermen such as shiners and topwater frogs and hasn’t made up his mind on whether the snakeheads’ arrival is all bad news. He’s still looking for more scientific research on long-term impact, But he’s leaning toward wishing they weren’t in the lake.

“I don’t want in five or six years to be having snakehead tournaments up here,” Neary said. “I’d rather stick to bass tournaments.”

Kenny, who has fished in Octoraro Lake, said he could easily believe Neary’s dumping theory.

It seems there’s a Catch 22 of snakehead fishing catching on. Some people are intentionally stocking ponds and streams with snakeheads, Kenny said. That’s illegal. But he said he’s heard too many people bragging to think otherwise.

He suspects that’s why snakeheads are now believed to be breeding in Lake Redman near I-83 in York County, about 12 miles from where the Susquehanna flows below the Turkey Hill Dairy.

Teddy Fisher, York County’s assistant director of parks and recreation, said there are pictures of several Redman-retrieved snakeheads floating around Facebook. He said signs have been posted at Redman that illustrate the difference between snakeheads and the similar looking native-to-North-America bowfin. They tell people not to throw back or release elsewhere any snakeheads they catch and to report catches to the Fish & Boat Commission.  (A primer on the difference can be found at https://lanc.news/snakeheads

Kenny points to a 2019 report from the U.S. Fish and Wildlife Service and the Maryland Department of Natural Resources.

Kenny said it will take several more years to know the true impact in Maryland rivers and the Chesapeake where the snakeheads have grabbed hold.

He tries spreading that word on snakeheadlife.com, a page he promotes with vehicle decals that have started showing up on Lancaster County roads.

The decals are made by York County business Wicked Stickerz and More in Shrewsbury. Owner Aris Matos says he met Kenny at his Maryland crab shack and also worked with him on T-shirts and mugs.

Matos said he is pretty sure he’s shipped at least one “snakeheadlife” decal to every state in the nation. Beyond the bottom line, he said, he’s glad to be associated with efforts to raise snakehead awareness.

“They take over everything …” Matos said. “Something’s got to be done to get them out … or at least get them under control.”

Snakeheads, by the numbers

When: Little Britain Township Board of Supervisors meeting, Oct. 12.