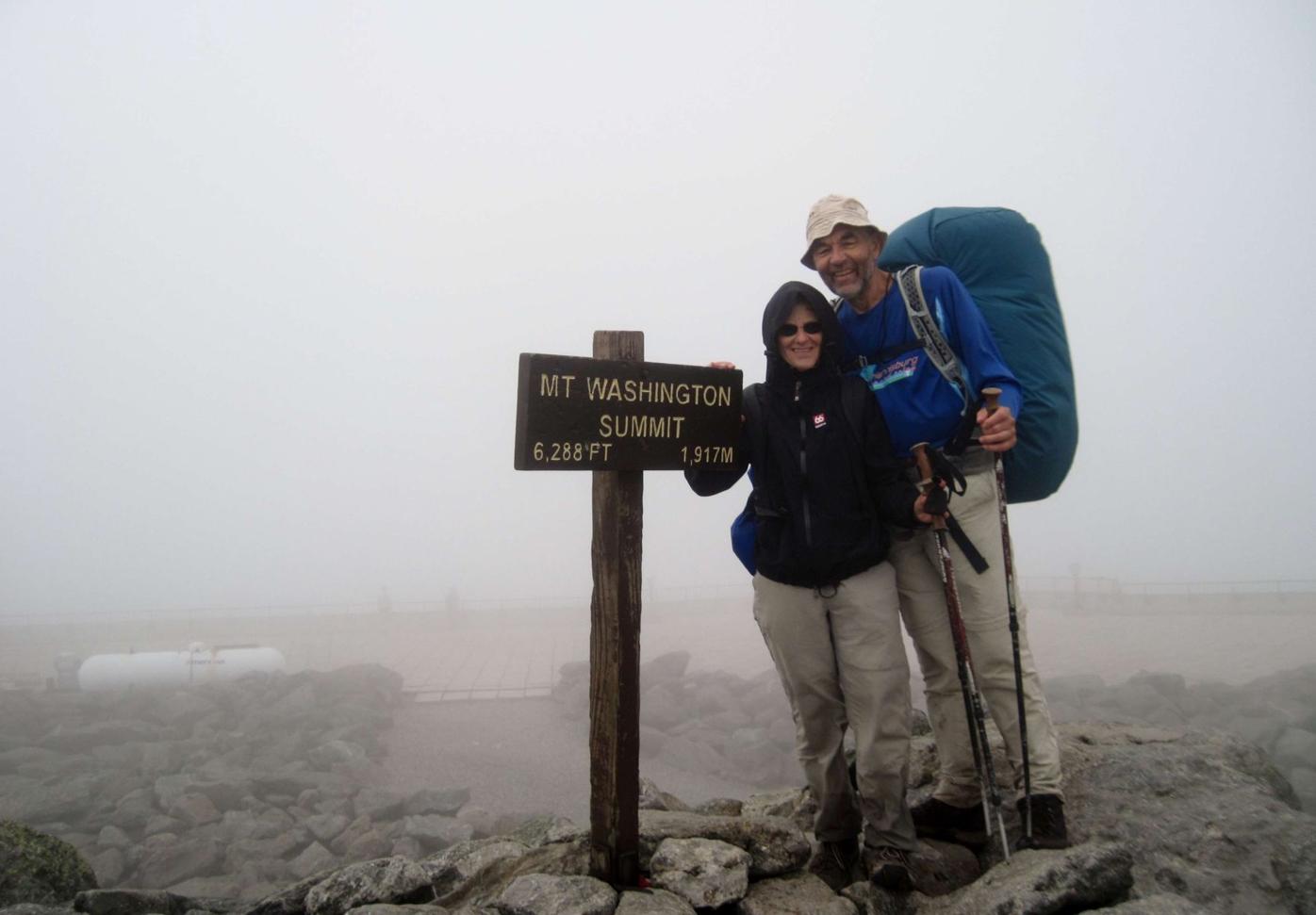 Lois and Ernie Hess on top of Mount Washington in 2013. 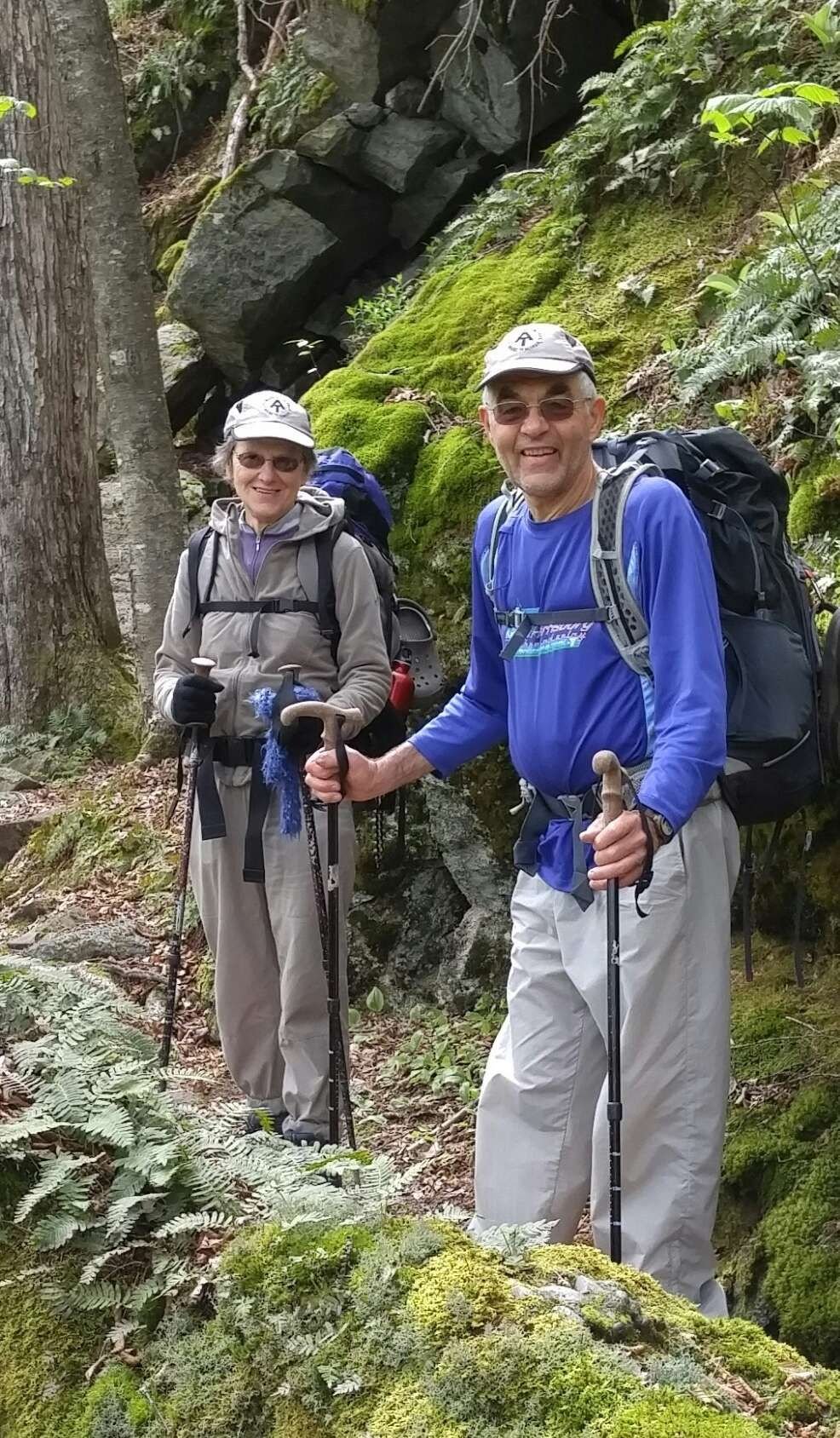 Lois and Ernie Hess on the Appalachian Trail near the end of their 17-year journey. 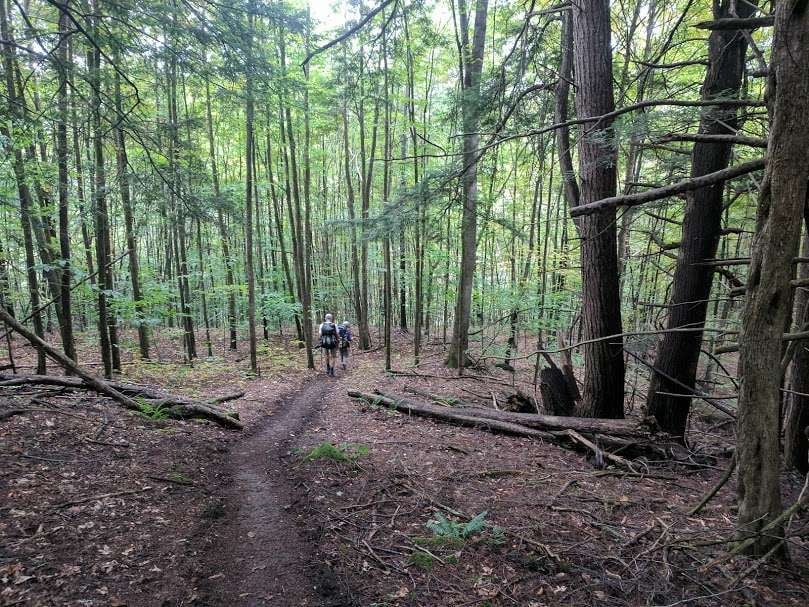 Lois and Ernie Hess make their way through Vermont woods on the Appalachian Trail. 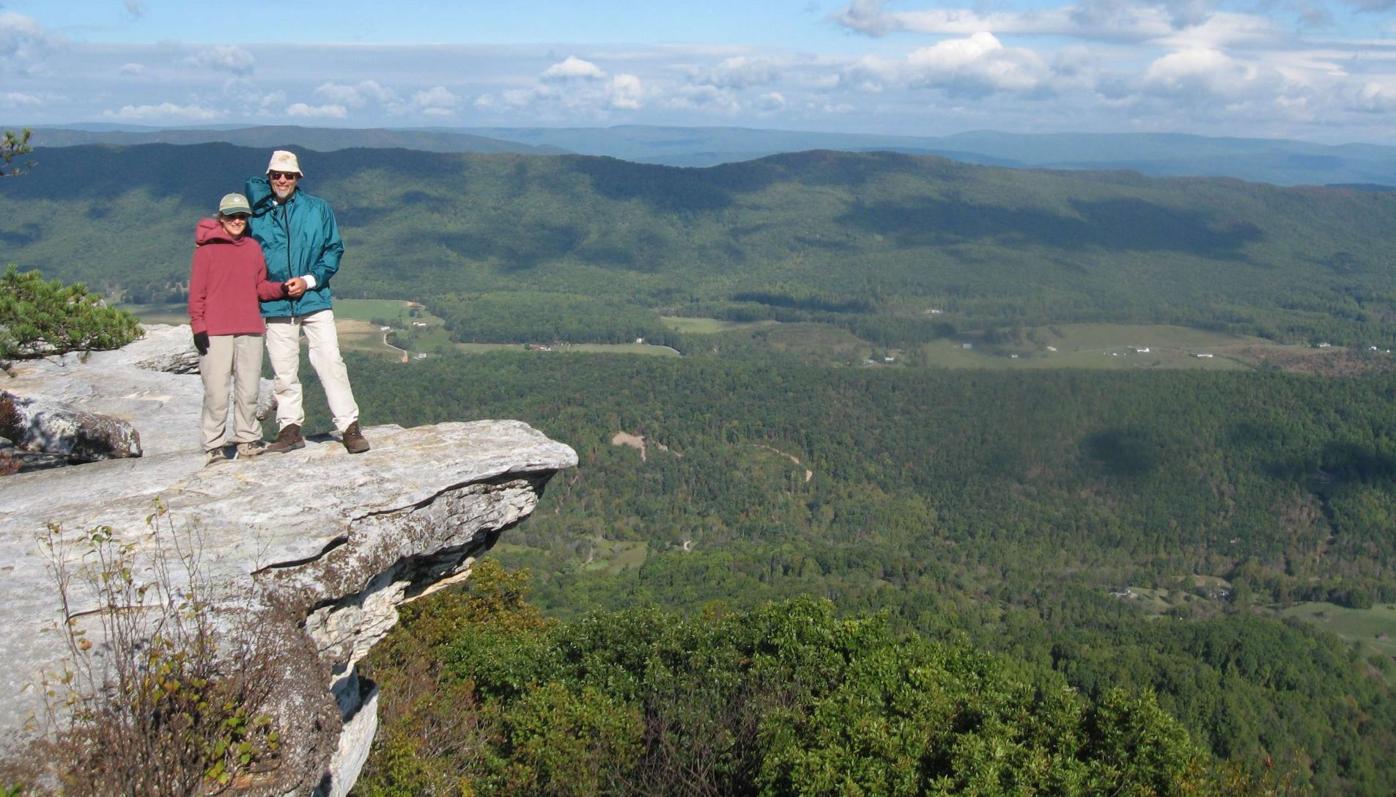 Lois and Ernie Hess on McAfee Knob in Virginia in 2010. 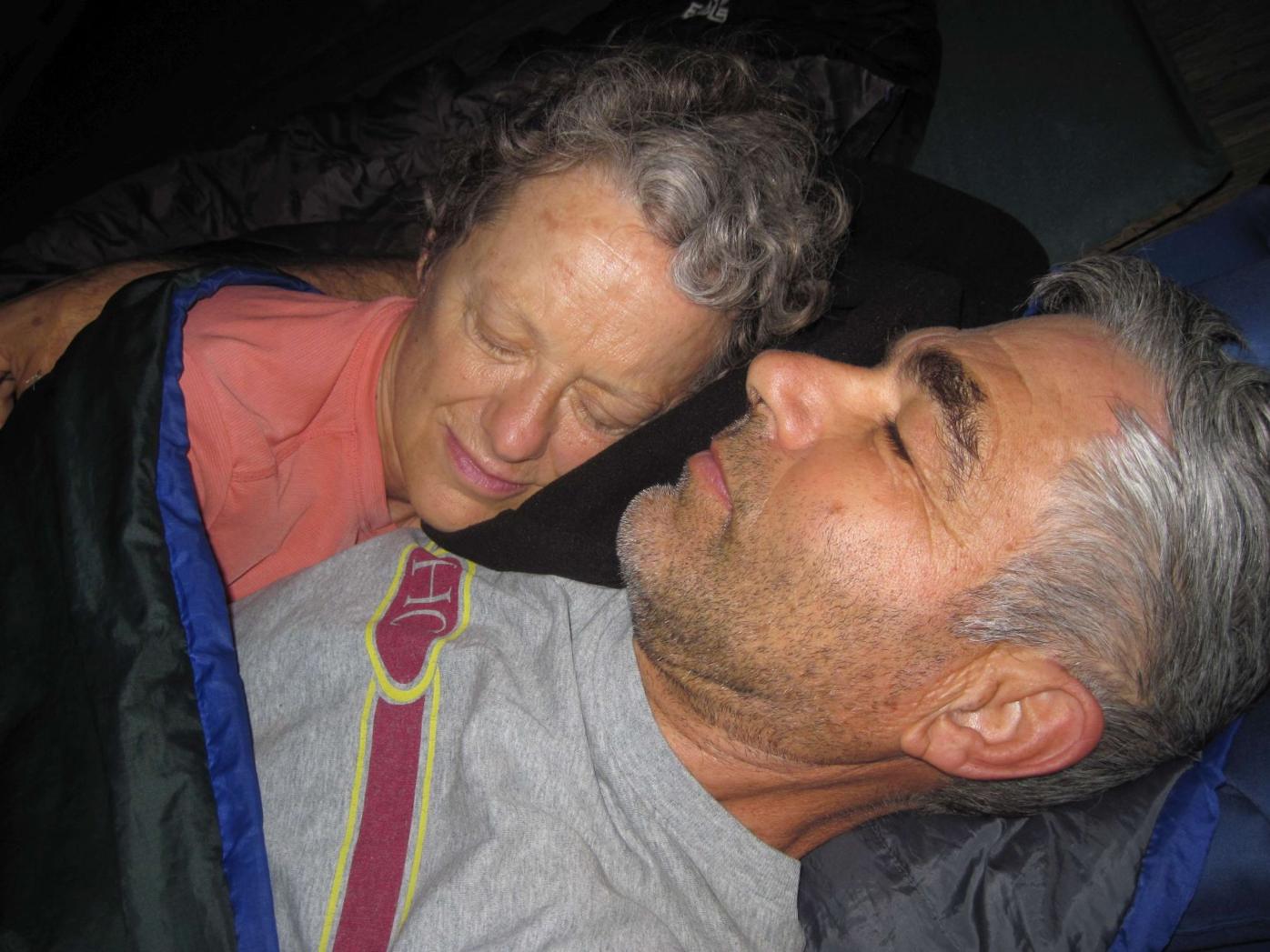 Ernie and Lois Hess sleeping close in an Appalachian Trail shelter in 2010.

Four million steps, a mountain rescue for a broken hip, breast cancer and a broken fibula later, Ernie and Lois Hess have realized their dream to hike the famed Appalachian Trail by the time they were 75.

The 17-year itch began inconspicuously enough in the summer of 1965 when the pair from West Lampeter Township honeymooned at Camp Hebron, a church camp north of Harrisburg.

The couple took a 10-mile or so day hike on Peters Mountain to see the Susquehanna River on the Maine-to-Georgia trail.

“We were fascinated by how long this trail was,” recalls Ernie, a retired teacher, guidance counselor and administrator from Lancaster Mennonite School. Then there was the allure of getting away and escaping into wilderness.

A seed was planted, and they began dreaming of hiking more of the nearly 2,190-mile trail.

But the seed was slow to germinate. It was not until 2001 and a church conference in Tennessee that they began taking hiking forays of three to 18 days on sections of the trail.

They’d do a lot of the hikes during summers when Ernie was off and Lois could take vacations from her job as a caregiver for seniors.

The routine usually involved parking their car at a destination trailhead, then having a local resident shuttle them to a starting trailhead. Progressing from south to north, they’d begin each hiking season where the last summer’s ended.

The couple were not through-hikers on the trail, but they’d stay in trail shelters and learn trail gossip and meet others immersed in the unique culture of the trail.

Ernie’s trail name was Morning Song, a sign of appreciation for each new day dawning with good health. Lois chose Towhee, in recognition of the bird’s almost daily call from the forest around them.

They experienced the “trail magic” that cloaks the experience. They found coolers of cold drinks beside the path left by anonymous “trail angels.” Strangers invited them to stay in their homes.

I wore out five pairs of shoes. Some of that leather has become a part of who I am today, this fiber of my being.

Twice they nearly stepped on rattlesnakes and a copperhead. One night in Vermont a bear shuffled under a picnic table just outside the shelter where they slept.

Family got involved in the slowly unfolding journey. Their daughter, Audrey Hess, son-in-law and their two children, only 2 and 3 years old, would journey from their Gettysburg home to hike sections of the trail and camp with them in Virginia and Pennsylvania. They did this over 10 seasons.

Lois was diagnosed with breast cancer in 2005. In 2011, Ernie suffered vertebral compression fractures from a fall — not on the trail — which ended the hiking season.

And age was catching up. In 2013, they skipped north to tackle the rugged White Mountains of New Hampshire. At noon one day, while hiking up Mount Hayes, the last of the peaks in the Presidential Range, Ernie slipped on a rock and landed hard on his hip. He couldn’t even roll over without excruciating pain.

Their dangerous predicament set into motion a large-scale rescue effort in the valley below. It took 20 people to reach Ernie and carry him off the mountain. He was hospitalized for eight days with a severely fractured hip.

“Strangers-turned-angels appeared to serve us in our calamity,” Ernie says.

Back home, some friends suggested the time had come to end the quixotic journey and avoid further injuries. But when Ernie’s doctors and therapists urged him to remain active, you can guess the result.

The next summer, in 2015, with about 500 miles still to experience, the couple was back on the trail, this time to hike the daunting 100 Mile Wilderness in Maine. But extreme heat forced them to end the attempt early.

The following summer they were back, finished the section and summited Mount Katahdin, the celebrated northern end of the trail.

They then returned to Mount Hayes where Ernie was felled in 2013. They completed that, but near the top of Mahoosuc Arm, Lois stepped into a leaf-covered hole and snapped her fibula. She wrapped it up and walked more than 5 miles out the next day on her own.

"We felt like a guest. We wanted to cherish this welcoming into the wilderness and the privilege of just being there."

The beginning of 2017 — the year they both would turn 75 — found them with 322 miles remaining. They redoubled their efforts.

They knocked out Maine and much of Vermont in June and August. Lois turned 75 on June 6. Ernie will be 75 on Thursday.

With just two days of hiking left, they were surprised by their daughter and son, Phil Hess, who had traveled from his home in Montana. Together, the family hiked and camped together for the final two days, on Sept. 16 crossing the Connecticut River, ascending a hill and hugging a huge tree, known as the Hiker’s Elm, on the green on the edge of Dartmouth College.

Both Lois and Ernie cried tears of joy.

Hiking the trail had taken 48 different hiking trips over 17 years.

Both consider the experience a gift.

“There was something almost sacred about the beauty and serenity of an entire natural setting,” Ernie says.

“We felt like a guest,” Lois adds. “We wanted to cherish this welcoming into the wilderness and the privilege of just being there.

“The trail also stirs up a spirit of gratefulness for things we used to take for granted, like food and shelter and water. I wore out five pairs of shoes. Some of that leather has become a part of who I am today, this fiber of my being.”