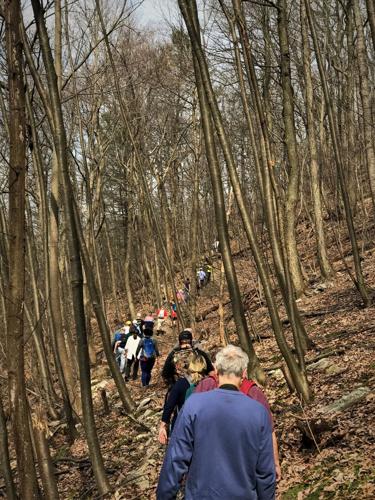 Visitors to a Lancaster Conservancy nature preserve had to form a queue to hike through the woods last summer. 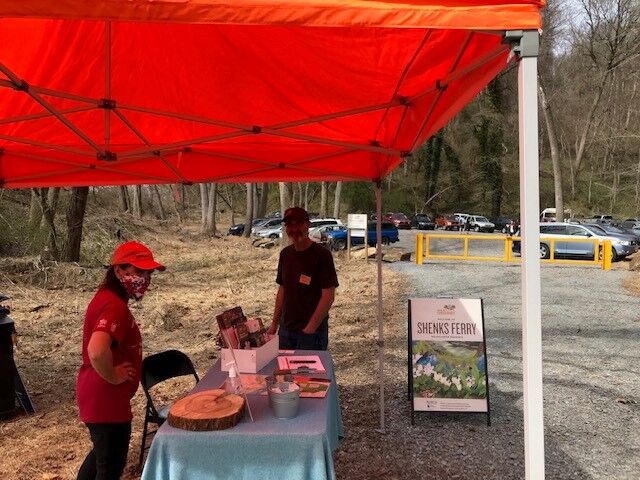 Volunteers have been recruited by the Lancaster Conservancy to teach leave-no-trace rules at heavily used nature preserves.

Visitors to a Lancaster Conservancy nature preserve had to form a queue to hike through the woods last summer.

Volunteers have been recruited by the Lancaster Conservancy to teach leave-no-trace rules at heavily used nature preserves.

Local and state land managers were swamped with record use of area parks, trails and preserves, as well as state game lands, state forests and state parks. While a lifesaver to people cooped up because of COVID-19 restrictions, the mass use hammered the environment in many places, overwhelming parking lots, leaving behind litter and dog poop, and flattening wild plants.

“Every weekday was like the Fourth of July,” is how Paul Weiss, administrator of the Lancaster County parks system remembers last year’s crush.

Now, with restrictions easing, that heavy use is continuing. But with a year to adjust, local and state groups are more prepared to protect the environment from being overrun.

“Our preserves are places for respite, recreation and our spiritual, emotional and physical well-being,” says Keith Williams of the Lancaster Conservancy. “We are happy about that but it’s a double-edged sword. We want to welcome all people to the preserves, but in a way that protects nature.”

People exploring all 47 of the conservancy’s popular network of preserves in Lancaster and York counties may be greeted by one or more of the 100 volunteers recruited in recent months to see that leave-no-trace practices are followed.

Preserve use roughly doubled last year, according to the conservancy.

One of the most thorny problems was a lack of parking at the most popular preserves. Too many people arriving to find full parking spaces simply parked along the road or blocked driveways.

The small parking lot at the Tucquan Glen and Pyfer nature preserves, the most popular of all, had to be closed and will remain so until the conservancy figures out a solution to the problem.

The preserve is open but people will have to reach it by parking at either the House Rock or Pinnacle Scenic Overlook nature preserves on either side. It’s about a 2-mile hike from either one to Tucquan. One enterprising resident near Tucquan is offering private parking for $5.

Another problem was visitors unintentionally widening trails by the sheer volume of so many hiking boots on crowded days or going off trail to avoid the crowds and starting new trails.

The solution, Williams says, is simple: stay on trails. A trail restoration project this summer at Tucquan Glen will remove some of the side trails there to usher everyone onto main trails.

Another common violation of preserve rules is letting dogs off leashes.

“This time last year the only thing you could do is go to your grocery store, pharmacy or your park,” Weiss says. But, fortunately, he says that in the early going county parks are not experiencing the big crowds of a year ago.

The one notable trend, he says, is more people using parks on weekday afternoons, likely because more people work from home and have flexible free time.

Environmental programs are back to a full schedule.

“People are flooding to our summer camps,” Weiss adds. “They really are looking forward to a return to normal.”

The Pennsylvania Game Commission’s vast network of nearly 1.5 million acres of state game lands is all open to the public. But like the state’s other public open spaces, last year’s crowds looking for an escape were hard on the land.

The Game Commission continues to do targeted enforcement at various game lands where there were problems with partying, drug use, littering and rock outcrop spraying, notes Dustin Stoner, information and education supervisor in the commission’s southeast region.

Some properties in Dauphin and Schuylkill counties continue to have illegal use of all-terrain vehicles and four-wheel-drive trucks and enforcement has been stepped up.

Mountain bikes and horseback riding is permitted only on designated trails. E-bikes are currently prohibited on all game lands. No camping is allowed on game lands and users of rifle ranges must have a valid hunting license or range permit.

The state Department of Conservation and Natural Resources estimates use of its state parks and forests attracted nearly 47 million people in 2020, compared to 37 million in 2019.

All parks, pools, beaches and camping facilities are back to normal this summer with a few exceptions: the pool at Codorus State Park in York County will be closed each Tuesday and Wednesday because of staffing issues; French Creek State Park in Berks County is closed for the season due to construction.

Users of state parks or state forests do not have to wear masks if vaccinated; users who are not vaccinated must wear masks outdoors when in crowds.

If you have an inclination to “thru-hike” all 2,193 miles of the famed Appalachian Trail, you now are allowed.

For more than a year, the Appalachian Trail Conservancy had recommended against the long-distance milestone because of COVID-19 and gathering hikers, and refused to acknowledge hikers’ achievements if they did.

But on May 11, the conservancy reversed the policy. Hikers continue to be advised to camp in tents rather than use often-crowded three-sided shelters.

Wherever you go outdoors this summer in Pennsylvania, be mindful of ticks. A recent study by the state Department of Environmental Protection found that of 3,000 adult blacklegged (deer ticks) ticks tested, more than half were infected with Lyme disease.

Rock climbing since he was a child, Cam Horst later went through his teenage years building …

There are new rules governing the way hunters apply for antlerless deer licenses this year, and the application process begins in a few weeks.

The pedaling path hosts an array of people [column]

Lititz’s Emily Cameron is given to propelling herself forward.