Living with the pandemic over the past year has forced all of us to modify at least some of our habits.

For example, more people are venturing into the outdoors for recreation, and they’re keeping their outdoor adventures somewhat close to home.

Parks officials at the municipal, county and state level across Pennsylvania have reported a huge increase in traffic at their properties over the past year.

People are heading out in droves to hike, bike, canoe, fish, hunt and on and on.

Surprisingly, it’s not uncommon to visit your favorite Lancaster County park these days and encounter lots of people.

But travel barely 3 hours north, and you can find plenty of nature to explore, along with lots of elbow room, in the aptly named Endless Mountains of northeast Pennsylvania.

Within an hour’s drive of Laporte, Forksville, Eagles Mere, Dushore and Red Rock, you can find access to enough public outdoor recreation to keep you busy for a month straight.

Here are the top destinations you’ll want to visit in the Endless Mountains region of Sullivan, Lycoming, Columbia and Luzerne counties.

Ricketts Glen State Park – This is a 13,193-acre park spread across parts of Columbia, Luzerne and Sullivan counties. Arguably the most popular attraction within the park is the Falls Trail System in the Glens Natural Area. You can make a 7.2-mil loop hike on a steep, rocky trail along Kitchen Creek that will take you past 21 named waterfalls, including the 94-foot-tall Ganoga Falls, which is the tallest of the lot.

There’s also the 245-acre Lake Jean, which is a popular fishing spot for largemouth bass, pickerel and other species. Any non-powered boats are allowed there, while motorboats can use electric trolling motors only. 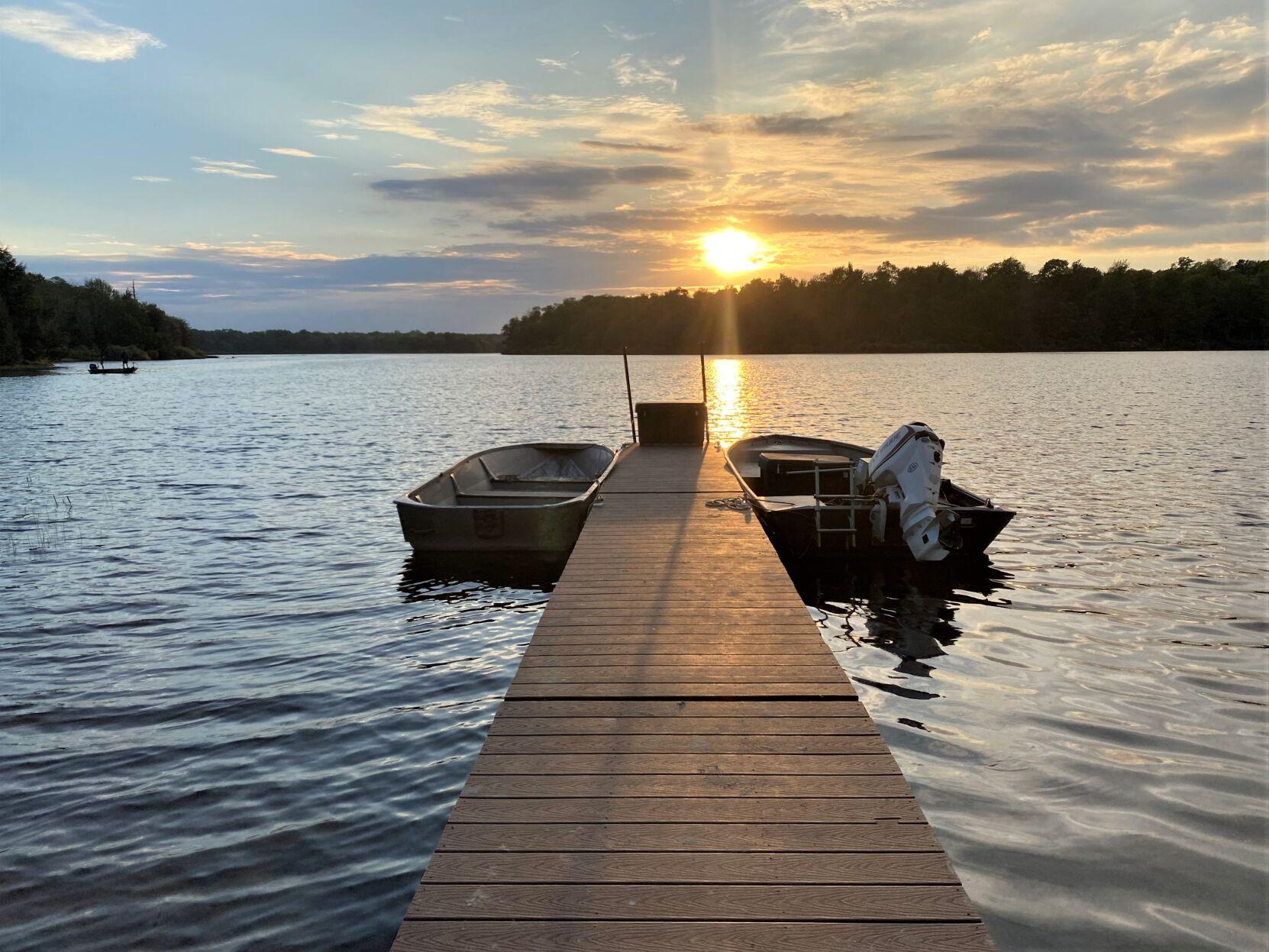 World’s End State Park – This 780-acre park surrounds a picturesque section of Loyalsock Creek in Sullivan County. The Loyalsock here is heavily stocked with trout, and the scenery is about as good as it gets for mountain stream fishing. Definitely bring your gear.

If fishing isn’t your thing, there are several awesome hikes you can plan here – especially if you like mountaintop vistas.

High Rock Trail is only 1 mile long, but much of it is essentially straight up – or down, depending on which way you’re going. Point being, it’s a challenging trail.

At the highest elevation, the trail takes you to High Rock Vista, which offers an okay view looking south over the park’s main developed area.

World’s End Trail is 3.25 miles of steep terrain that peaks at the World’s End Vista. This view overlooks the park’s beach area, but the scenery is better than from High Rock Vista.

Canyon Vista Trail is a 4-mile loop that takes you to the best overlook in the park – Loyalsock Canyon Vista. This north-looking vista offers breathtaking views of the Loyalsock Creek gorge, as well as the mountains that frame it. If you can only do one of these hikes, this is the one to do, although you can drive to this vista as well. 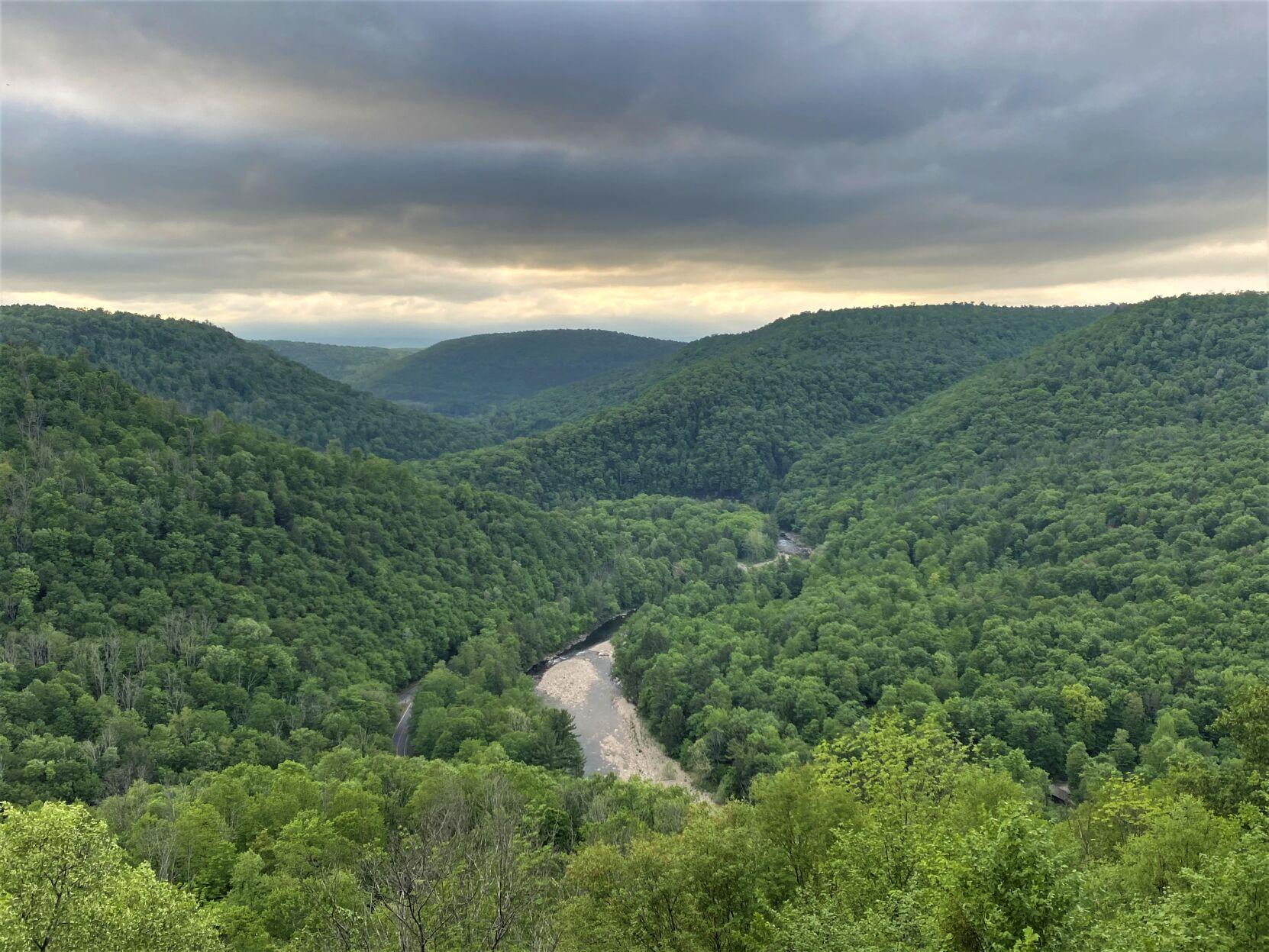 Loyalsock Trail – This is a 56-mile trail that runs from Dushore to Williamsport, through World’s End State Park and the Loyalsock State Forest. It’s easily distinguished from other trails in the area, by its round yellow markers with “LT” written on them in red letters.

For the adventurous, you can hike the entire 56 miles from end to end. Park a car at the end where you plan to finish and drive back to the other end to start your hike.

Be aware that camping is allowed on many parts of the trail, but not all. Know where you are and what’s allowed. 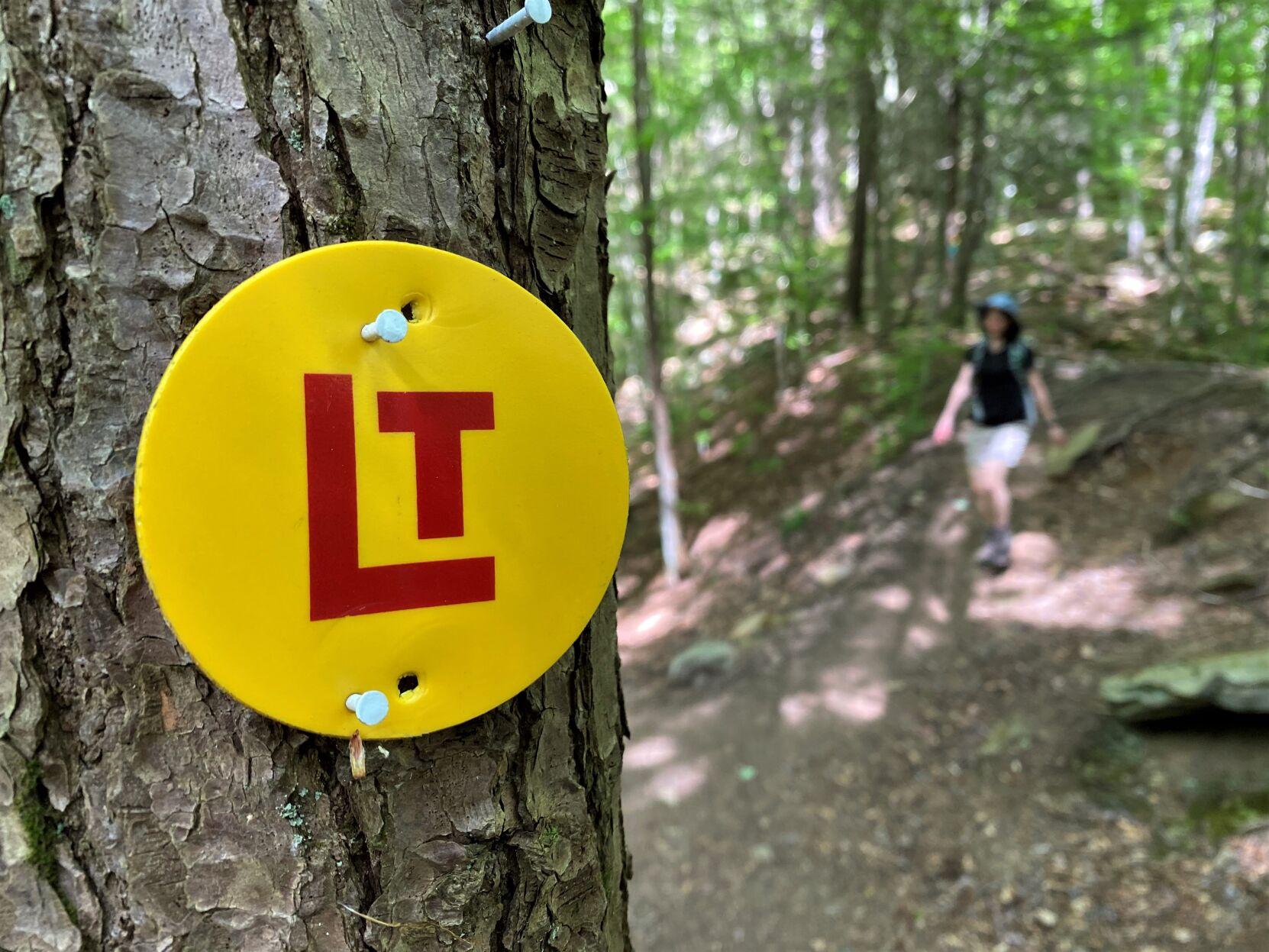 Most people are probably going to opt for day hikes, as opposed to overnight trips. And the Loyalsock Trail has something that will appeal to just about everyone.

The western end of the trail is rugged, with lots of elevation changes. The eastern end is the most scenic, with awesome vistas and great Loyalsock Creek geology. Throughout, you’ll find incredible mountain forest surroundings.

To plan a hike, go to alltrails.com and search Loyalsock Trail. The site has a map that shows the trail and all connecting trails, so you can plot out a loop, and which offers suggestions about what to see/experience on different parts of the trail.

Eagle’s Mere – No visit to the Endless Mountains is complete without a stop in Eagle’s Mere. This town at the top of a mountain in Shrewsbury Township, Sullivan County, was established in the late 1800s as a resort on the shores of Eagles Mere Lake.

It hasn’t been a resort town for more than 50 years, and there are many references in travel literature to Eagle’s Mere being “the town that time forgot.”

The main reason to visit Eagle’s Mere is to feel that sense of history. Walking the tree-lined streets, you can just tell that it once was a place that was very special. No doubt it still is to the folks who live there in the historic Victorian homes. But you can feel why it drew people looking for an escape from Philadelphia, Wilkes Barre, Scranton and Harrisburg in the late 1800s and early 1900s.

There used to be a series of grand hotels around the lake, which people flocked to via a narrow gauge railroad that was abandoned in 1930. You can hike a 2.1-mile section of the rail line in Eagle’s Mere, now that it is maintained as a trail by the Rails-to-Trails Conservancy.

Unfortunately, Eagle’s Mere Lake is a private lake that is not open to the general public, so you won’t be able to do much there except look at it.

There is a small, fascinating museum tucked into one of the only commercial buildings in town on Eagles Mere Avenue that tells the whole story of how Eagle’s Mere came to be a famous playground for Pennsylvania’s rich and famous. It’s definitely worth a visit

Forksville – To be totally honest, stopping by Forksville is not quite as entertaining as it was when the Forksville General Store was operating as a general store. Now it’s simply a Big Mike’s Steaks and Hoagies, minus the general store. 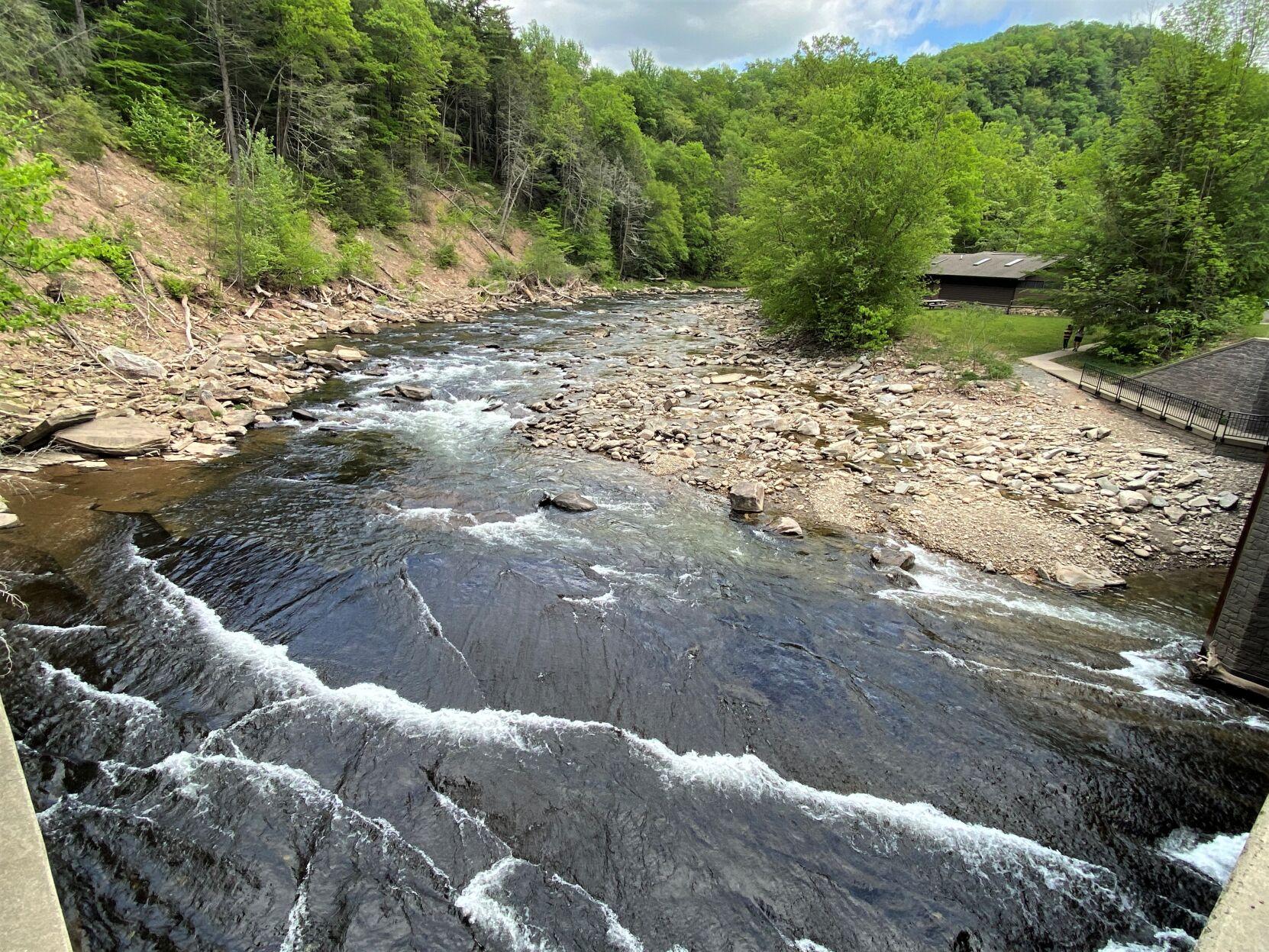 Stop in at Big Mike’s for lunch, which you can eat in the shadow of that covered bridge alongside the riffles of Loyalsock Creek. If you have your fishing pole, take a couple minutes to try to catch a trout.

Hoping to inspire the next generation of conservationists, the Lancaster County Conservation…

Catching a golden rainbow trout on Penns Creek is rare, but it doesn't hurt the stream.

There wasn’t much to do last summer, but the Susquehanna River never closed.

There are new rules governing the way hunters apply for antlerless deer licenses this year, and the application process begins in a few weeks.

Hunting licenses for 2021-22 are green and feature cut-out harvest tags, and the system that dispenses those licenses has been slow in the first week of doe-tag sales.