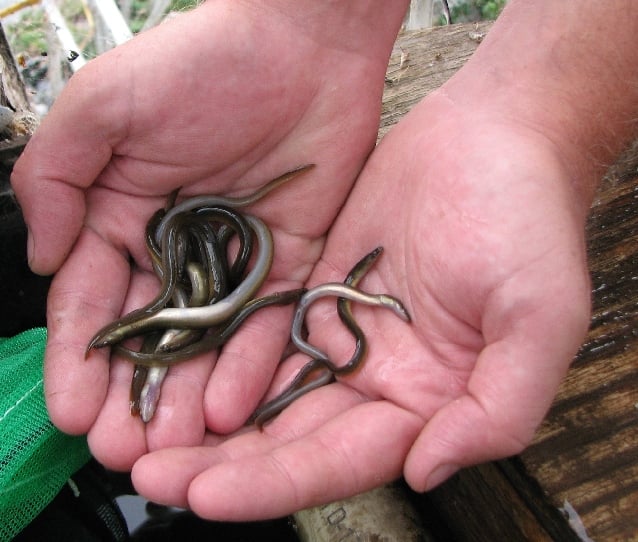 Young elver eels, 2 years old and 1,000 miles away from where they were spawned in the Sargasso Sea. (Ad Crable / Staff) 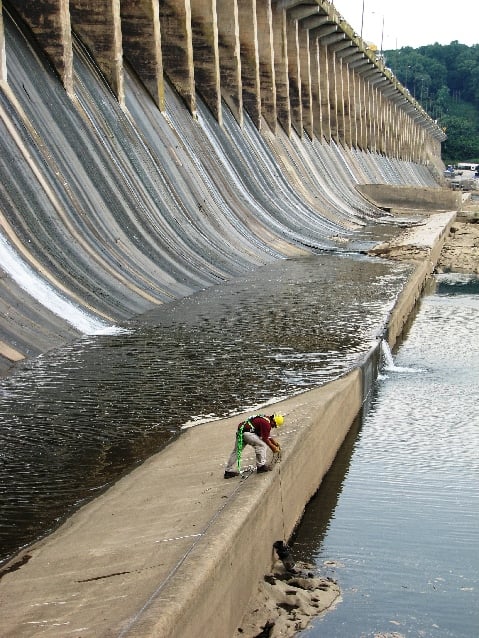 An eel researcher lifts an eel pot from the Susquehanna River at the base of the Conowingo Dam. (Ad Crable / Staff) 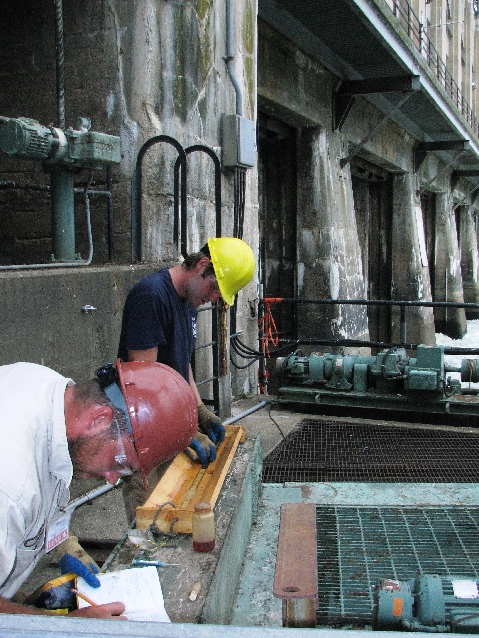 Young elver eels, 2 years old and 1,000 miles away from where they were spawned in the Sargasso Sea. (Ad Crable / Staff)

An eel researcher lifts an eel pot from the Susquehanna River at the base of the Conowingo Dam. (Ad Crable / Staff)

"Unfortunately, eels have suffered because they don't look like other fish," American eel researcher Steve Minkkinen is saying.

"They look like a snake and people do have a negative opinion of them."

Certainly, it didn't used to be that way. Here in Lancaster County, building stone eel weirs in the Susquehanna and capturing adults up to 20 years old on their fall migration back to the Atlantic Ocean was a ritual.

They used to catch 1 million pounds of eels for eating each fall up and down the Susquehanna in Pennsylvania.

Stephen Mohr, of Bainbridge, remembers how his dad and uncles ran some of the last eel baskets in the county.

"They caught eels by the boat load," he recalls. "The remains of some eel dams are still visible in the area of Locust Grove and the Haldeman Riffles.

"They had a cabin on the Lancaster County shore where they stayed so they would be close to the eel dams and baskets. People stealing from others' eel baskets was a problem."

Eels could account for up to 25 percent of biomass in streams back then. They were an important cog in the river ecosystem, delectable table fare and a predator.

The eels thrived in all 444 miles of the Susquehanna River as well as streams in its 27,500 square miles of watershed.

Then, a series of dams stopped the migration and outmigration. When the Conowingo Dam opened in 1928, eels were shut out only 10 miles into the river.

Minkkinen, project leader of the U.S. Fish and Wildlife Service's Maryland Fisheries Resource Office, says surveys by the Pennsylvania Fish and Boat Commission no longer find adult eels in the river or tributaries above the Conowingo Dam.

However, Mohr says a few eels continue to be caught with bait and hook each year.

But essentially, American eels are gone from the Susquehanna and have been in decline for decades up and down the Atlantic Coast.

Theories for the widespread declines include overfishing, loss of habitat, infections by nonnative parasites and changes in the ocean currents that transport larval eels.

From Florida to Maine, it's estimated eels are cut off or impeded by dams on 84 percent of their historic range.

The Atlantic States Marine Fisheries Commission, a state-federal agency that regulates migratory fish along the East Coast, reported several years ago that eel populations were "at or near" record low levels.

An effort to have the American eel listed as endangered was rejected by the USFWS in 2007 because the species was not threatened in all its range. A new petition seeking the protective listing was filed this summer.

Despite all the obstacles and prejudice by many to the creature, there are growing and concerted efforts to restore the American eel to the Susquehanna.

That's because dams like Conowingo, Holtwood, Safe Harbor and York Haven have their federal licenses up for renewal.

USFWS, ASMFC and fisheries agencies in Pennsylvania and Maryland are urging the Federal Energy Regulatory Commission to make the utilities find and fund ways to give eels safe passage up and down the river as a condition for license renewal.

It's why separate crews from the USFWS as well as Normandeau Associates, consultants for Exelon, Conowingo Dam's owner, were set up at the base of the dam last week.

A USFWS team stood watch as pumped water trickled down riprap into the river. Millions of 4-6-inch eels, now 2 years old after coming into existence in the Sargasso Sea and making their way up the Chesapeake Bay, bump into the Conowingo Dam in the summer months.

Determined little buggers, they will slither up low dams, and even crawl around them in wet grass. But the monolithic Conowingo Dam is insurmountable.

Fish lifts used to carry American shad and herring over the dam each spring do not work for eels because the currents used to attract shad are too strong and push eels away. Plus, shad and herring migrate during the day while eels are nocturnal.

Something more subtle is needed.

After years of trial and error, researchers hit on something that works. The trickle of water flowing through the riprap beckons. On the eastern side of the dam, Normandeau workers use a hose to send a stream of water to the base of the dam and their chutes.

The chutes have a layer of landscaping cloth that when combined with running water gives the eels purchase. They obediently climb up the chute and tumble right into a mesh bag.

Other eels are captured in eel pots with dead horseshoe crabs or chopped-up fish as bait.

All the eels are measured and a syringe used to inject a small identification tag about the size of a grain of rice under their skin.

Some of the eels are recaptures and by using a handheld scanner, the crew can determine such things as where the eel has been and how fast it is growing.

All the eels collected this summer - 32,000 so far here - will be trucked in cattle tanks on the backs of pickups and released either into Little Buffalo Creek, near Lewisburg, or the West Branch of Pine Creek near Wellsboro. Eels captured near Ocean City, Md., buttress the stockings.

Some 17,000 elvers were stocked in the Conestoga River in 2008, but releases there were stopped after a follow-up survey in 2009 failed to find any of the eels. It doesn't mean the eels did not survive, only that the river was too wide to sample, Minkkinen said.

A recent discovery is helping eel restoration gain momentum. The eastern elliptio is a freshwater mussel that is an important filter of nutrients and sediment.

With the push to clean up the Chesapeake Bay and the Susquehanna's problems with sick smallmouth bass, the elliptio could be an important and free cleanser.

Scientists have discovered that the American eel is the prime host fish for elliptio larva. Elliptio mussels are abundant in the Delaware River where dams do not impede eel populations and in streams below the Conowingo Dam where eels penetrate.

Some of the eels captured at Conowingo the last two years have been infected with elliptio larva before release upriver in streams where there are no reproducing populations of elliptio mussels.

Early returns - including among elvers stocked in Conowingo Creek in Lancaster County in 2009 - show juvenile mussels present in those streams. That indicates eels are the primary and necessary host in the mussels' life cycle. At the same time, elliptio larva placed on other fish has not worked.

Also promising: The transplanted eels from the Conowingo Dam are staying put where they are released.

In addition to finding effective "eelways" to get young eels over or around dams on the Susquehanna, there is the thorny problem of getting them safely back downriver when they migrate back to the ocean to spawn.

Ongoing studies on the Shenandoah River are finding a 30-percent mortality among adult eels swimming through dam turbines.

Some utilities there are shutting down at night and allowing the eels to spill over the relatively short dams. But on the Susquehanna, the dams are taller and shutting down means loss of significant amounts of electricity.

Another potential problem is the Susquehanna dams are apparently delaying outmigration. That may mess up the timing and doom reproduction of the eels if they don't show up in the Sargasso Sea the same time as other eels.

Obviously, the eels face an upstream battle. But since this is a fish that does things backwards anyway - it's the only fish that lives in freshwater and goes to the sea to spawn - that may be a good thing.

For a listing of outdoors events throughout Lancaster County this week, go to lancasteronline.com. Click on Sports, then Outdoors.

What a wondrous, still-mysterious dance, this American eel.

Though they are found from Greenland to Venezuela - the broadest range of any fish in the world - all American eels spawn in the depths of the Sargasso Sea, a part of the Atlantic Ocean in the heart of the Bermuda Triangle.

We know this even though no human has actually seen it.

The larva is then carried by clockwise Gulf Stream ocean currents to the eastern coast of the United States. There they migrate up estuaries, rivers and streams from Florida to Maine, often to the farthest headwaters, until they reach adulthood, attaining a length of 3 to 4 feet.

They'll live in marshes, ponds, lakes, rivers and streams anywhere from 6 to 20 years before something signals them to again make the 1,000-mile odyssey back to the Sargasso Sea, where they spawn 6,000 feet down, then die.

No one knows how they find their way. Before the epic migration, their eyes double in size and their fins enlarge.

Steve Minkkinen of the U.S. Fish and Wildlife Service likes to say American eels do everything backwards.

They are the only catadromous fish in North America, meaning they live most of their lives in freshwater and return to the sea to spawn. That's the opposite of American shad, another former denizen of the Susquehanna that is trying to be restored.