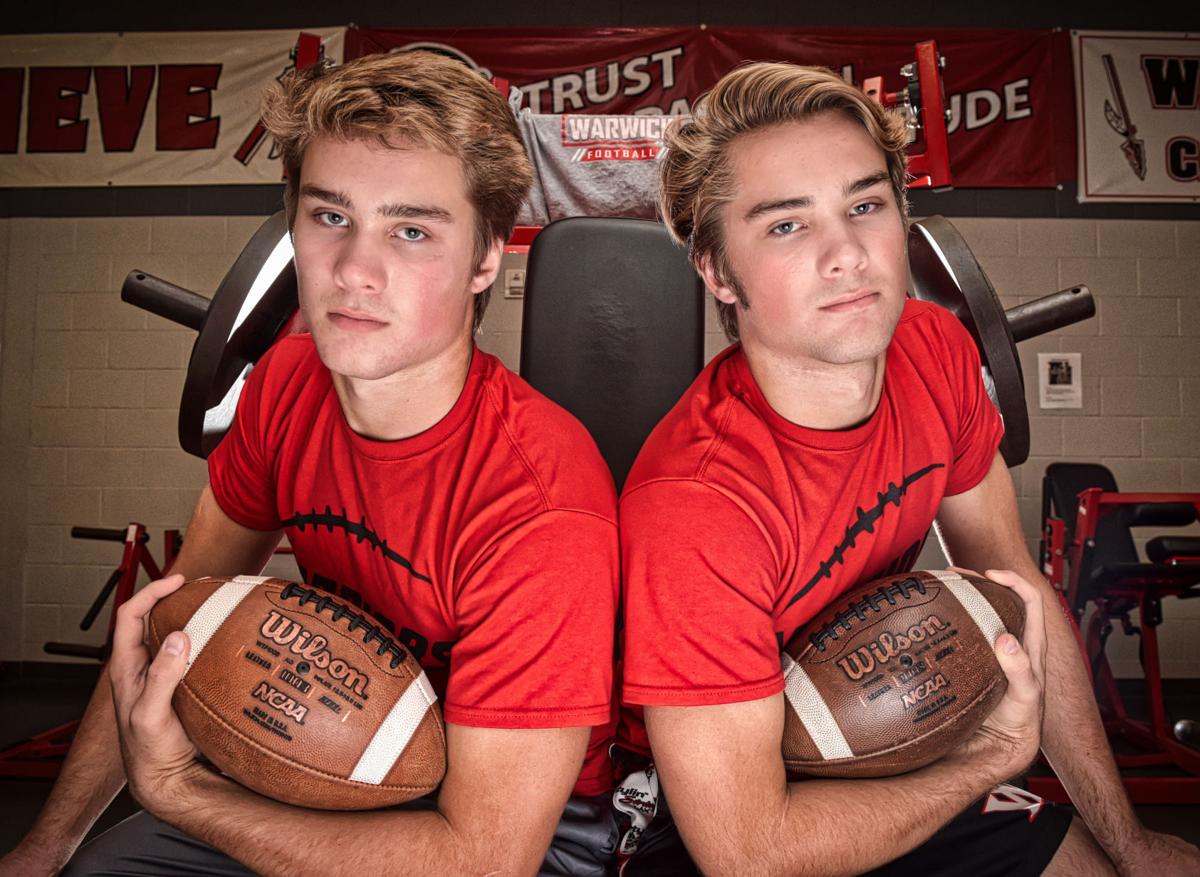 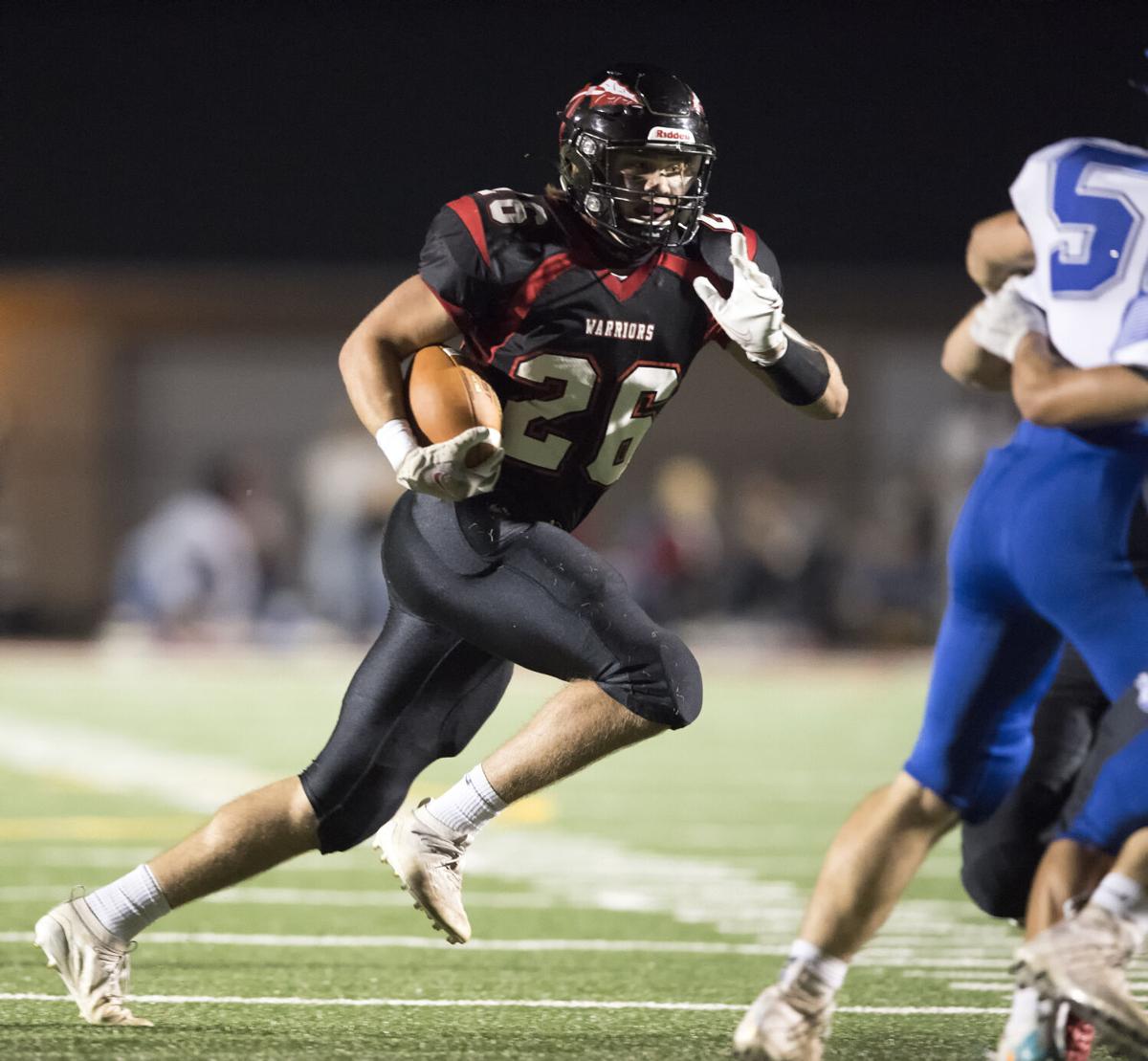 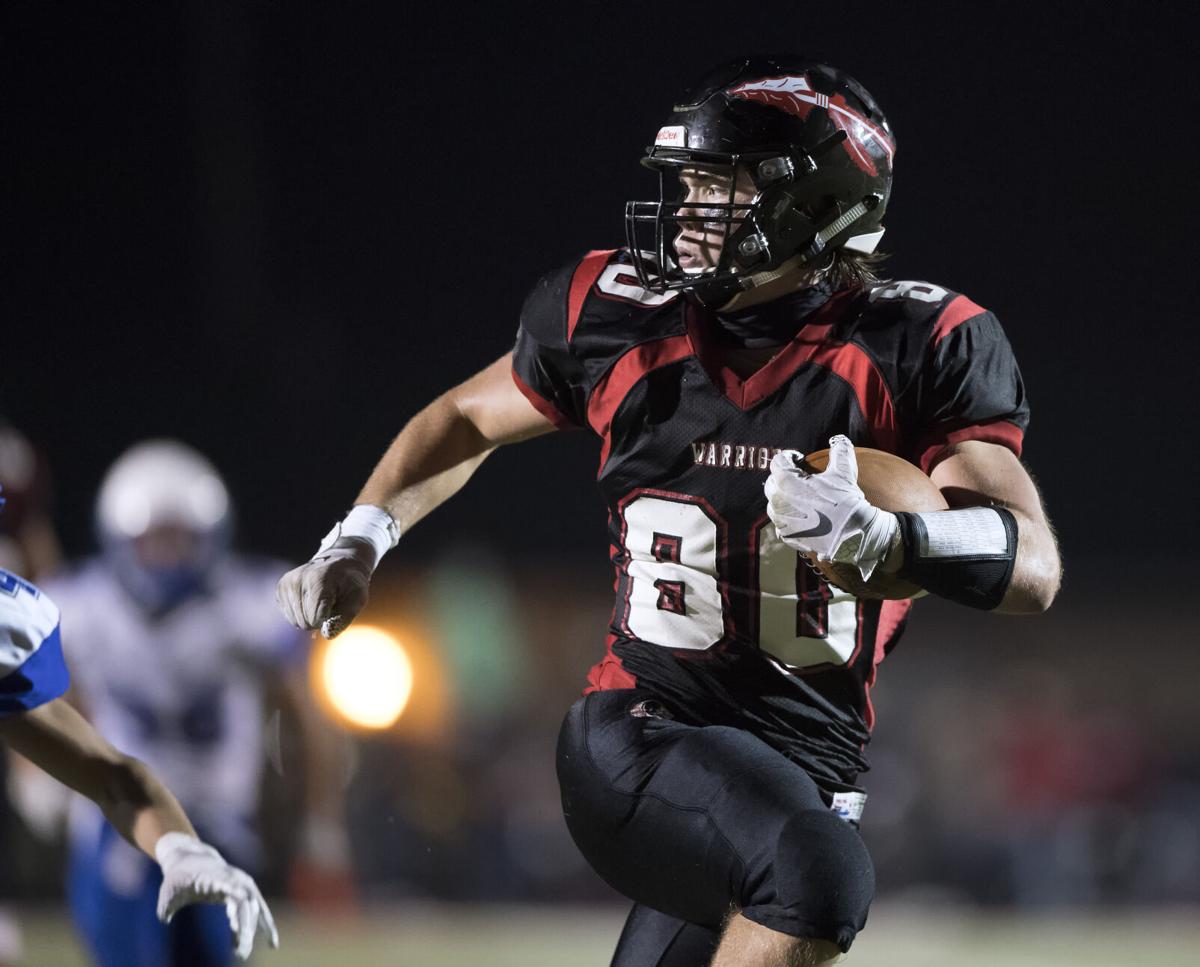 1. TWIN POWERS ACTIVATE: We’ve known for a couple of years now that Warwick twin brothers Colton and Thatcher Miller are really good football players, and they’re putting together memorable senior seasons for the Warriors, who improved to 6-0 overall and clinched the outright Section 2 title compliments of a 49-14 win over Cocalico last Friday. In that showdown clash, the Miller boys added to their Lititz legacy by both scoring two-plus touchdowns in the same game. Colton had TD runs of 2 yards and 5 yards — giving him an incredible 20 TD runs in 24 quarters of action this fall — and Thatcher did his brother one better, hauling in three TD catches from his tight end spot. His scoring grabs covered 28, 77 and 34 yards, as Thatcher caught four passes for 151 yards from QB Joey McCracken. Have a set of twins ever scored two or more touchdowns apiece in an L-L League football game? Heck, have a pair of twins scored one TD apiece in an L-L League football game? Can’t say for sure. The short answer is probably no on the multi-TD night. Either way, it’s very safe to say that the Miller twins are in a very select club with that impressive feat.

BONUS NUGGET — Elco will not play this week. The Raiders were supposed to play Donegal in their crossover game, but when the Indians moved up their Section 3 makeup game vs. Ephrata to this Friday, that left Elco without a game. And the Raiders have decided not to play, instead resting up and prepping for their Nov. 6 D3-4A semifinal-round game (keep reading) ... Elco vs. Donegal will not be made up.

2. MILESTONE UPDATES: Three L-L League quarterbacks are closing in on 1,000 passing yards this season. Warwick’s Joey McCracken needs just 24 air yards to join the club on Friday, when the Warriors play their league-mandated crossover game at Hempfield. … We’re anxious to see how long Warwick skipper Bob Locker keeps his starters in, knowing the Warriors have a D3-5A semifinal game on Nov. 6 — regardless of Friday’s outcome vs. the Black Knights. Hey, you play to win the game, as Herm Edwards once famously said. But Warwick will have some bigger fish to fry in two weeks. Stay tuned. … Lebanon’s Isaiah Rodriguez needs 93 passing yards for 1,000 for the Cedars. He probably would have cleared that mark this past Saturday, but a health issue kept Rodriguez on the sideline against the Indians. He’ll be tested early in the week to see when he can get back on the field; Lebanon is at Lancaster Catholic on Friday in a makeup Section 3 game. The Cedars will also play Cedar Crest in the annual Cedar Bowl on Nov. 6, so Rodriguez should get a couple of more cracks at 1,000. … Octorara’s Weston Stoltzfus — who is having some kind of a breakout debut season behind center for the Braves — needs 180 passing yards for 1,000. The Braves are at home against Garden Spot in their crossover game on Friday, and Stoltzfus is certainly capable of getting 180. If not, Octorara has added a game vs. McCaskey on Nov. 6. … As mentioned last week, it’s not looking good for multiple 1,000-yard rushers this season. Hey, it was bound to happen with a truncated season. Heading into Week 7, just three L-L League backs have 600-plus yards: Elco QB Braden Bohannon (802), Octorara RB Mike Trainor (685) and Warwick RB Colton Miller (656). … As of Monday morning, Elco doesn’t have a game scheduled for Friday; the Raiders were supposed to play Donegal in their crossover game, but the Indians moved up their makeup Section 3 game vs. Ephrata to Friday so they could finish their section slate, leaving Elco idle. Don’t be surprised if the Raiders remain idle to rest and prep for their D3-4A semifinal on Nov. 6. We’ll see how it all shakes down, and how it impacts Bohannon’s chase for 1,000 rushing yards. … Trainor has at least two more games: Friday against Garden Spot and Nov. 6 vs. McCaskey; Miller has at least two more games: Friday at Hempfield and then the D3-5A semifinals. … Again, with everything going on in the world, stats and milestones aren’t very high on the priority list this season. Getting to actually play games, on the other hand, is. … A 1,000-yard receiver this season will definitely be a stretch; heading into Week 7, just three L-L League wideouts have 500-plus yards: Lebanon’s Alex Rufe (569), Warwick’s Caleb Schmitz (556) and Manheim Central’s Owen Sensenig (513). The incredible thing about Rufe’s total is that Lebanon has played only five games, and Rufe only lined up at receiver in four of those; he played QB this past Saturday vs. Donegal, filling in behind center for Rodriguez. So he’s amassed all of his receiving stats in four games, and leads the league in receiving yards.

3. PLAYOFF PICTURE: The official District 3 playoff brackets will be released Tuesday morning, but barring any unforeseen issues, the matchups are set:

Notable: Millersburg won this bracket last year, topping Fairfield 56-28. … Rollers and Squires — oh my — for gold this time around.

Notable: Wyomissing won this bracket last year, edging Middletown 24-21. The Spartans and the Blue Raiders scarfed up the top seeds this time around.

QUICK CAVEAT: Harrisburg (3-0) added a game just under the wire for Monday vs. Mid-Penn foe State College. That game will give the Cougars the minimum four games to be playoff eligible. Will it impact Wilson? We shall see. But when D3 updated the district power rankings reflecting Harrisburg adding a game, the Cougars immediately jumped to the 1-line in 6A, and Wilson dipped to No. 5 — and on the outside looking in. It appears Harrisburg could even lose vs. State College, a 6A team, and still be in the top four. But heading into Monday, things look this way ...

Notable: On the original 2020 schedule, Wilson was supposed to play at Central Dauphin back on Aug. 28 in Week 1. They could potentially meet three months later — depending what happens with Harrisburg — this time with a spot in the D3 finale hanging in the balance; CD is the defending champ after the Rams beat Harrisburg 27-20 last year. … Central York is coached by former longtime Lebanon skipper Gerry Yonchiuk.