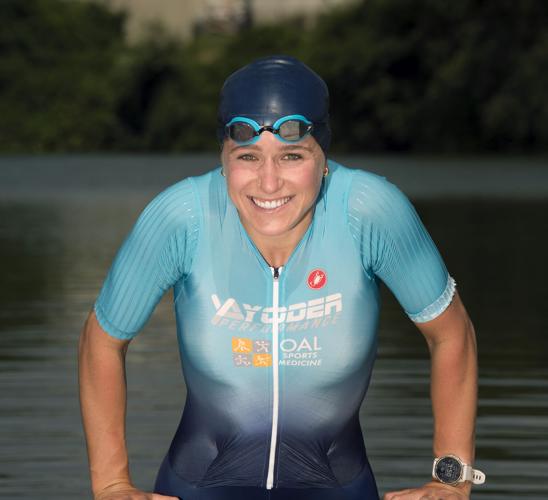 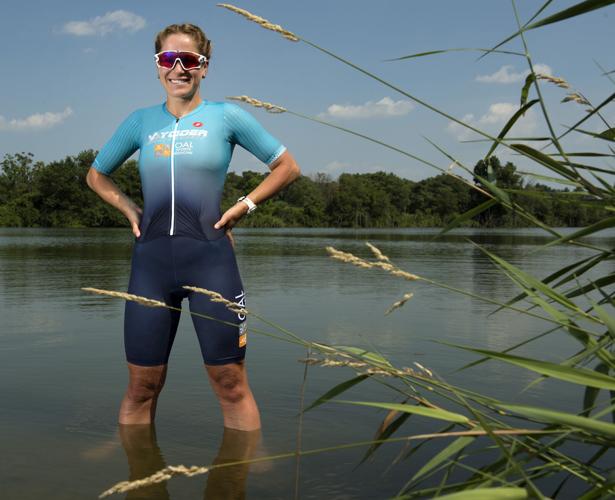 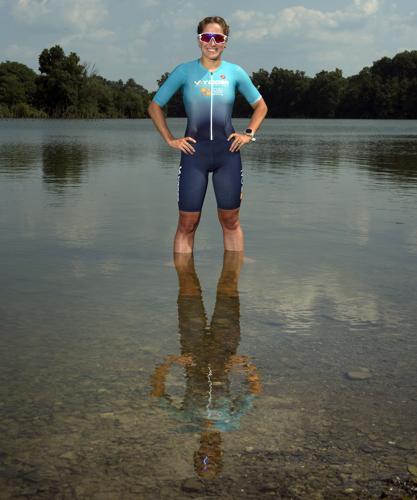 Katie Yoder competed in her first triathlon in the summer of 2017, shortly after her sophomore year at Franklin & Marshall College.

Two years later, Yoder competed at the Ironman World Championships, placing 467th out of 610 competitors, and 24th out of the 31 racers in her age group (then 18 to 24). Not an incredible showing, but something to build on for a relative newbie to the sport. The future was bright.

Then the COVID-19 pandemic happened. And Yoder went back to school to obtain a Master of Business Administration degree, graduating in May. She also got married last September and landed a dream job in April.

With her plate cleared for the first time in about three years, and thus having more time to devote to training, Yoder returned to the triathlon game — and won the Ironman 70.3 (or half-Ironman) Musselman race in Geneva, New York, on July 10.

Ideally, that is how Yoder’s comeback story would be described. But it wouldn’t be entirely true. Go back to 2019, for instance, where her performance at the Ironman World Championship made her realize something.

“I knew that I’m not an Olympic champion,” Yoder recalled. “So I knew I had to prioritize my career. It was hard. But I knew if I found a career as much as I love triathlons, then I would be excited about it.”

“I knew coming out of college with my environmental degree, I needed something to go to the next level,” she said. “Bard offers one of the only MBAs in sustainability. I really wanted to work on sustainability initiatives.”

For two years, Yoder juggled a full-time job and her studies, which included making a two-hour commute north from Lancaster County to Bard for one weekend a month.

“I stayed in Airbnbs and hotels,” she said. “It was really hard. But I loved it.”

Yoder landed a job as a sustainability analyst with The Hershey Company in April, most recently having worked on a project looking at the carbon footprint of cocoa.

Asked for a chocolate fun fact, Yoder said, “Hershey’s Chocolate is one of the only brands that makes their chocolate with liquid milk instead of powdered milk.”

Anyway, on the triathlon side, Yoder trains under the banner of Yoder Performance, a Lancaster-based triathlon group founded and operated by Hempfield alum Andrew Yoder.

If you notice the similarity in last names, it’s because Katie and Andrew Yoder got married in September and now live in East Petersburg Borough.

Katie was one of the original members of Yoder Performance, which has more than quadrupled in size since Andrew Yoder founded it five years ago. As a result, the competition Katie Yoder sees in practice has dramatically improved.

Related: Hempfield grad Andrew Yoder’s goal is to give back to triathlon community [column]

Related: Donegal alum Becca Yunginger off to promising start in her first year competing in triathlons

“When Andrew started YP, I was young and angsty,” Katie Yoder recalled. “I was trying to have personal bests everyday in practice. I was the big fish in a small pond. The best part is I think I slowly realized that there were a lot of aspects holding me back as my peers have improved. … I’ve had to overcome the mental game.”

Like comparing herself to others. Or chewing over mistakes in her mind as she competed in races. Or being disappointed if her times didn’t improve.

“I had to get comfortable with my journey,” she said. “I used to just fight myself.”

When she was a girl, Yoder and her twin sister, Steph, received a DVD of the broadcast of the previous year’s Ironman World Championship as a gift from their father every Christmas. It’s what planted the seed in her to eventually compete there.

Related: Ironman competitor Katie Schick talks about her journey from the pool and other challenges in 'Inspirational Athletes' [podcast]

She’s soon set to compete in the Ironman World Championship in Kona, Hawaii, followed by the Ironman 70.3 in St. George, Utah. Both events are in October.

A career goal is to someday place in the top 10 in her age group at the Ironman World Championship.

That might not come this year, though. After all, she has only recently returned to devoting more of her time to training and competing on a consistent basis.

And Yoder is OK if it doesn’t happen yet. She should be. Top triathlon competitors usually reach their peak in their mid-30s. Yoder is just 26.

“It’s not something I’m focusing on day to day,” she said. “I see myself taking my elite card someday in the future.”

USA Triathlon issues elite licenses to racers to allow them to compete for prize purses of $5,000 or more. In other words, Yoder’s comeback performance two weeks ago could be the jump start to something big. But she’s not looking too far ahead.

“I don’t want to put a timeline on that,” she said. “I would love to get some amateur wins under my belt. I just got one.”

Hempfield alum Andrew Yoder drops by the LNP studio on episode No. 84 of the "Inspirational …

Hempfield grad Becca Hayes has been competing in triathlons since 2009. She’s a veteran in t…

Competing in her second triathlon and first half-Ironman earlier this month, Donegal alum Be…

Andrew Yoder knows very well what it means to feel grateful. Has known it for quite some tim…

Many folks may have spent their Saturday morning indoors watching the Royal Wedding on TV. M…

The Lancaster Barnstormers had a four-game Atlantic League win streak halted Wednesday night with a 10-7 loss to the visiting Charleston Dirty Birds.

Shortly after graduating from Mary Washington University in 2019, Derek Hagino went to work as a tennis pro at Lancaster Country Club in Manhe…

Jake Sitler laid bedridden inside his Marietta home for about an entire month near the end of summer 2018. Rest was the prescription after Sit…