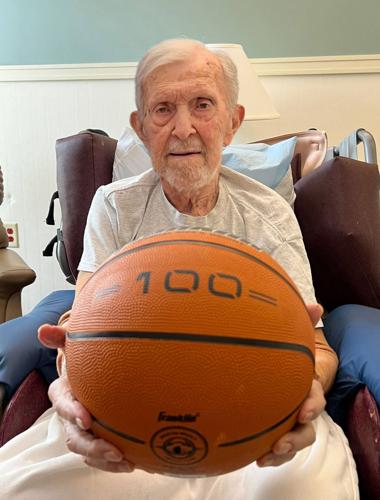 Whitey Von Nieda, in his room at Masonic Village, with a basketball that says it all. 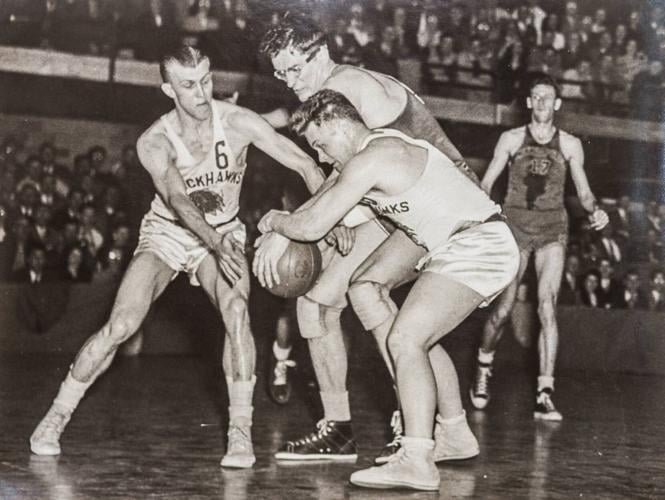 Whitey Von Nieda (left) and his Blackhawks teammate try to take the ball from NBA legend George Mikan (center) during a game in the late ‘40s. 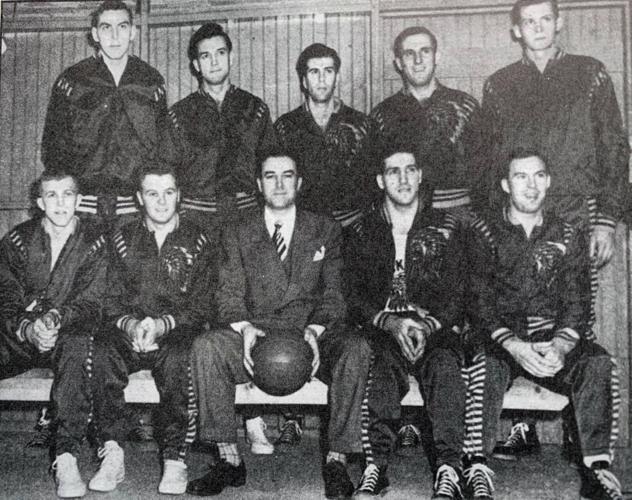 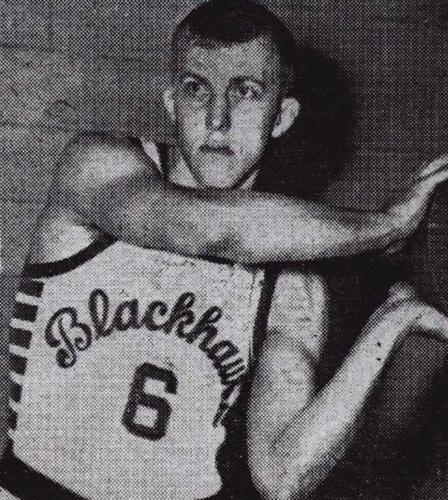 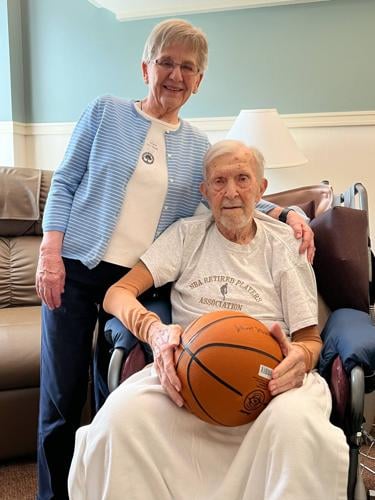 Whitey Von Nieda, in his room at Masonic Village, with a basketball that says it all.

Whitey Von Nieda (left) and his Blackhawks teammate try to take the ball from NBA legend George Mikan (center) during a game in the late ‘40s.

Whitey Von Nieda was coached by Red Auerbach, had beers with George Mikan, and was recruited, sort of, by Adolph Rupp.

Those are magic names to any basketball fan with a sense of history, and Von Nieda, an Ephrata native, has led a long, colorful and memorable life, in and out of the game he loves.

Today marks a milestone uniquely his. Von Nieda is the first NBA player to celebrate his 100th birthday.

A certificate arrived in the mail last week from the NBA Retired Players Association, recognizing his “legacy as the first former NBA player to reach 100 years of age.’’

Von Nieda’s real name is Stanley, but, he says, “nobody ever called me that.’’

The nickname refers to his flowing blonde hair, which is no longer blonde, but still flows.

He is 6-foot-1, with a body that is still lean and appears close to his playing weight of 170 pounds. In hoops parlance, he was a classic swingman — too quick for anyone as tall as he was, too big for anyone as quick.

“I could play either (guard or forward),’’ he recalled. “Sometimes I’d take my man down inside and hook it over him.’’

He became a star at Ephrata High School, leading Lancaster County in scoring in 1940. He attended Penn State, where he played on the freshman team, since freshmen were then ineligible for the varsity.

Then he enlisted in the Army and became a paratrooper stationed mostly in Germany during, and immediately after, World War II.

That’s where he ran into Rupp, the legendary coach at the University of Kentucky, who ran a series of basketball clinics for which he found Von Nieda an ideal example for teaching points.

“He told me to come find him when I got back home,’’ Von Nieda said. “I didn’t take it too seriously, but I found out later I really could have gone there and played for him. All I would have had to do was show up.’’

While still a Penn State student, Von Nieda began his professional career playing weekends for the Lancaster Red Roses in the Eastern Basketball League. Von Nieda’s play for the Red Roses drew the attention of the Tri-City Blackhawks of the NBL, which signed him in 1947.

The Blackhawks were based in Moline, Illinois. Tri-City refers to a cluster of towns along the Mississippi River near the Illinois-Iowa border. The team was owned by Leo Ferris, a colorful entrepreneur credited with inventing the 24-second shot clock.

The Blackhawks were beloved locally. They drew crowds in the 6,000-8,000 range. Von Nieda became a celebrity in the tri-cities area, often speaking to banquet audiences. The governor of Illinois, Adlai Stevenson, attended one such function, where Von Nieda, in a nervous mistake, called him “Alibi’’ Stevenson.

Stevenson, who was the Democratic nominee for President in 1950, got a kick out of it.

“He asked me if it was OK if he used that,’’ Von Nieda said.

Auerbach, who later ran and coached the Boston Celtics to nine NBA titles, was the coach.

“I didn’t think he was the greatest coach,’’ Von Nieda said. “But he was really good at recruiting, putting a team together.’’

Mikan, a hulking 6-10 center, was pro basketball’s first superstar, a larger-than-life figure and, for Von Nieda, a great guy to hang out with.

“He was nocturnal,’’ Von Nieda said. “He’d sleep during the day, and play in a game at night. If there was no game, he’d go out and have a good time.

“When we were in (Minneapolis), he’d take me out for a few beers, and when he came (to Tri-City), you’d return the favor.’’

In 1949, the NBL merged with the Basketball Association of America to form the NBA.

The web site Pro Basketball Reference shows him playing one NBA season, 1949-50, but the current NBA traces its own origins to 1946. It considers Von Nieda’s three seasons with Tri-City to be NBA seasons. That works for Von Nieda, who has thus been eligible for, and for decades received, an NBA pension and health insurance.

“That’s been a very valuable thing over the years,’’ he said.

Von Nieda sustained an eye injury in 1949-50. His playing time went down, and he was traded to the Baltimore Bullets, for whom he played his last NBA game.

That offseason he was offered the head coaching job at Elizabethtown College and returned to Lancaster County. He coached three seasons there, compiling a 27-18 record.

He continued to play pro and semi-pro ball on the weekends, and played in alumni games at Ephrata High until he was in his 60s.

Somewhere in there was an opportunity to coach at what was then Rhode Island State, now the University of Rhode Island, but lines of communication were crossed, and somehow the deal fell through.

He worked as a bartender at the Black Angus restaurant in Ephrata for many years, and wrote a trivia-style column for the Ephrata Review.

He likes the current NBA, watches it, and college basketball, all the time on TV. His long-standing favorite basketball team is the University of Connecticut women.

“That coach (Geno Auriemma) really has it together,’’ he said. “I just love the way they play. They’re fun to watch.’’

Von Nieda had a bad fall in March. There was a blood clot and complications, and he is now convalescing at the Health Center at the Masonic Village in Elizabethtown, where he and his wife, Arlene, have lived since 2007.

“I don’t like it,’’ he said of rehab. “The point is that I’m getting better, and it’s not going to be too long before I’m up and getting around again.’’