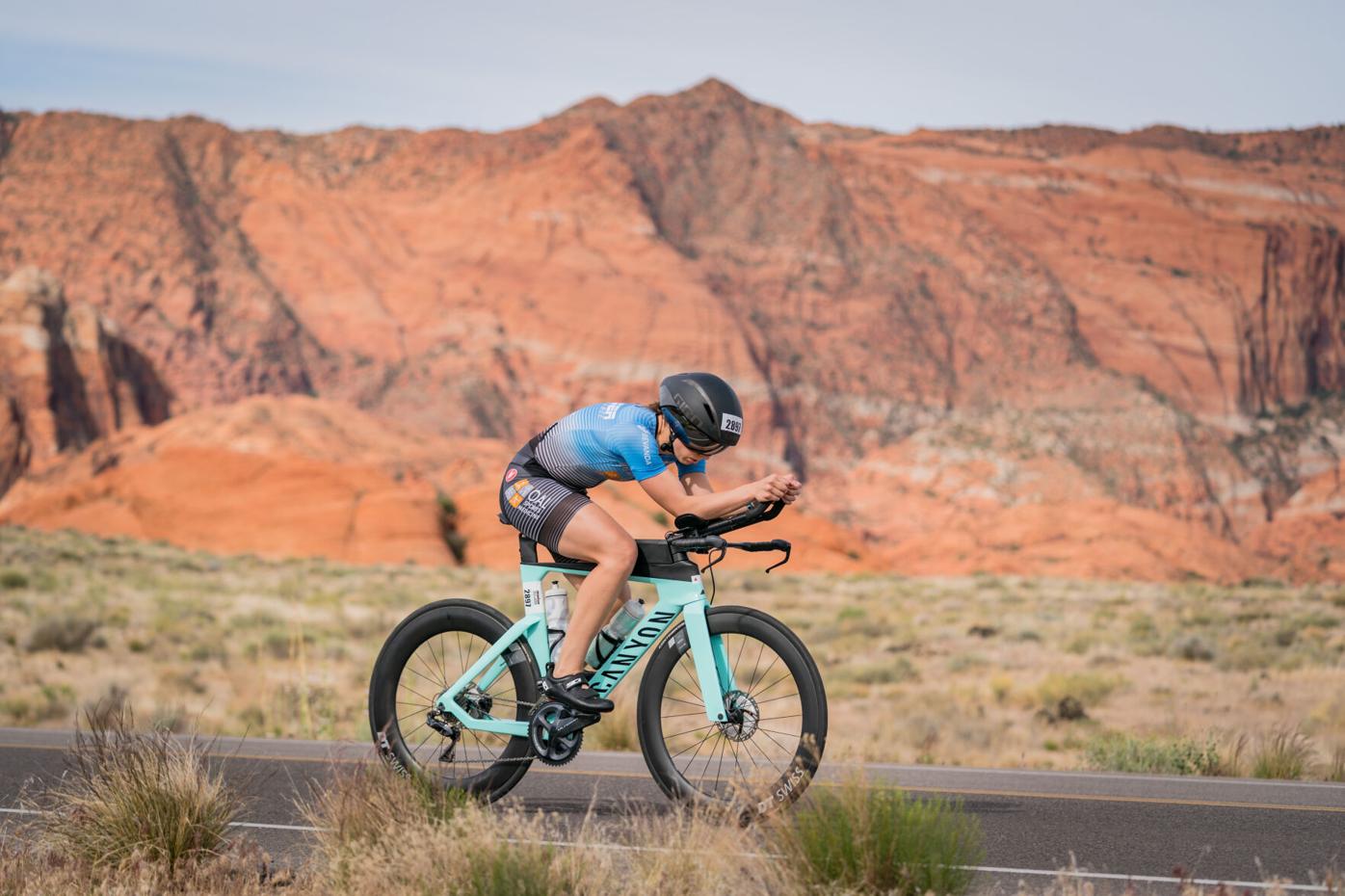 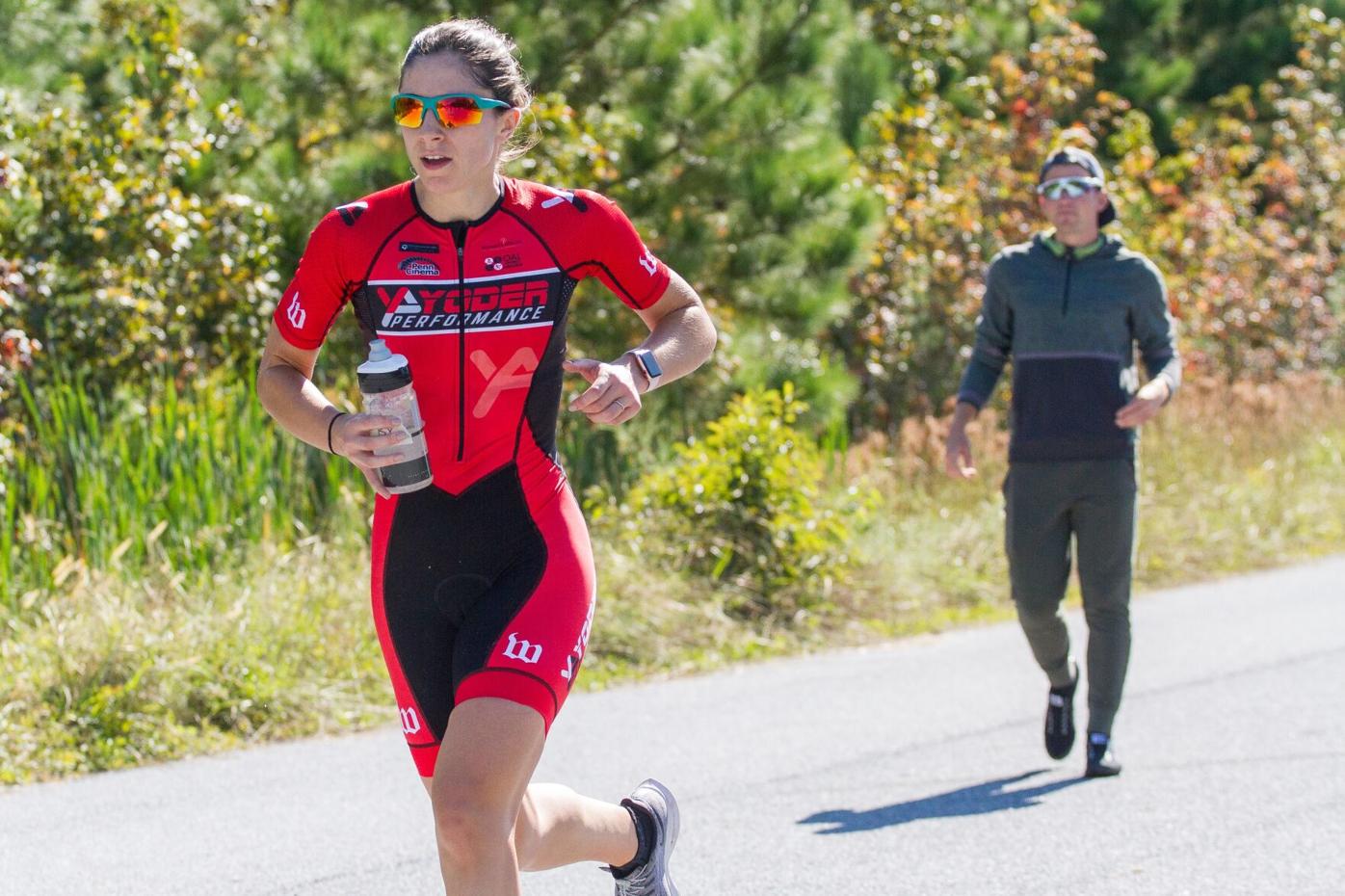 Donegal alum Becca Yunginger is in her first year competing in triathlons as a member of Lancaster-based Yoder Performance. 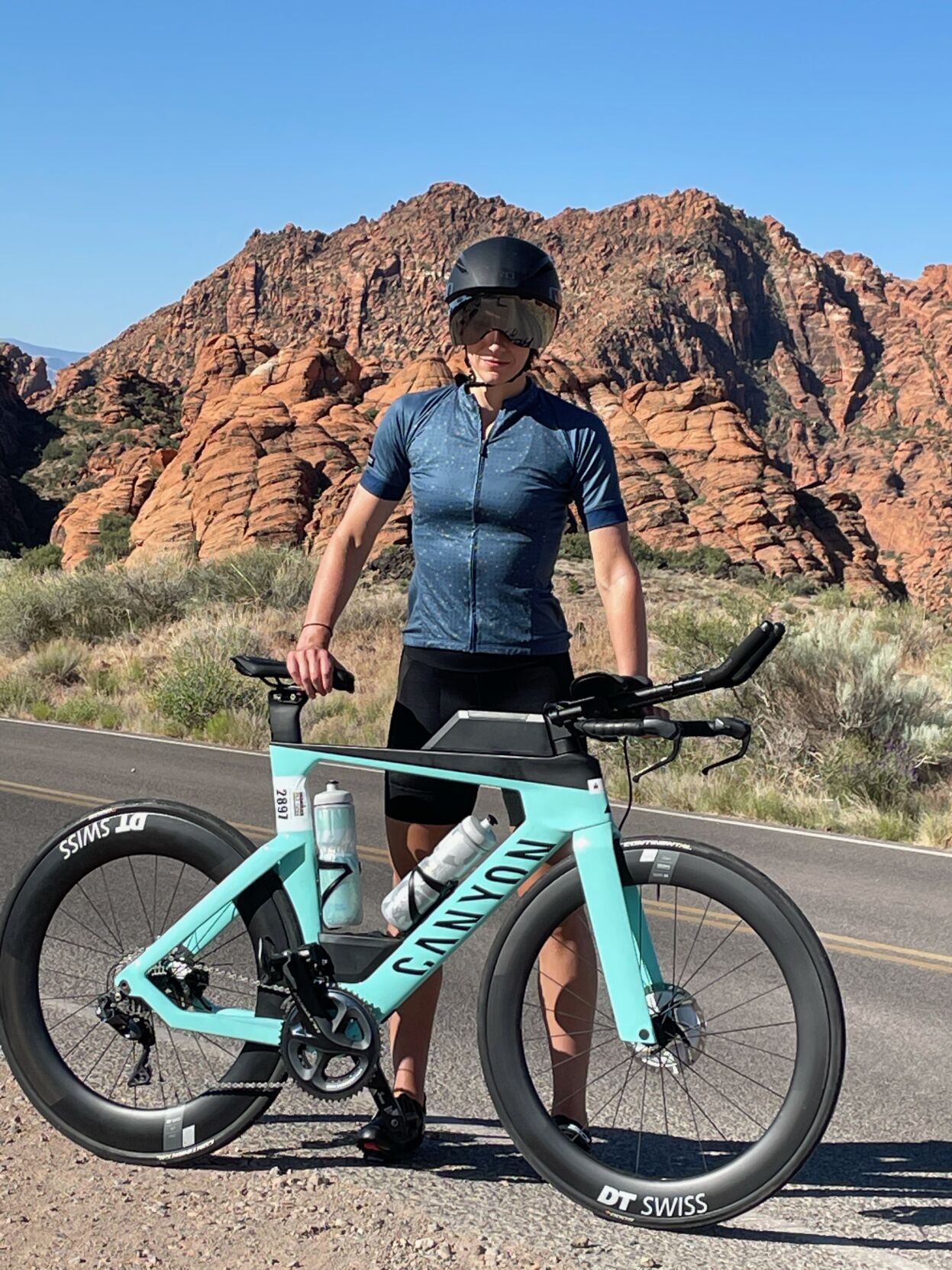 Competing in her second triathlon and first half-Ironman earlier this month, Donegal alum Becca Yunginger endured rookie mistakes. Out of the gate, her goggles fogged up as soon as she hit the water.

“I never swam in open water,” Yunginger said. “The whole way out I was just trying to find any people to lead me in the right direction.”

On the bike portion of the race, Yunginger felt so good and enjoyed the scenery of St. George, Utah, so much that she didn’t consume as much water as she should have.

“I didn’t realize how much I was sweating when I was biking,” she said. “So dehydration, and I was eating too much, so without water in the body I wasn’t able to digest the food as well.”

It led to her feeling sick to her stomach during the final stage: the 13-mile run, a distance equivalent to a half-marathon.

Despite all of those obstacles, Yunginger finished second in her age group (25 to 29) and 15th overall at the 70.3 North American Championship on May 1. The event is essentially the top half-Ironman (70.3 total miles) competition in North America.

“Even though I am a little disappointed with the swim and the run portions, I am happy with the overall accomplishment,” Yunginger said. “I had never swam in open water. I had never run a half-marathon, either. Navigating that space as a new athlete to the sport, I’m happy with how I got through it all.”

It’s a promising start for someone who only began learning about the sport last August, when a friend invited her to a swim session with Yoder Performance members at Woodridge Pool in Lititz.

The origins of Yoder Performance dates back about a half-dozen years, when Hempfield alum Andrew Yoder began coaching others for triathlons. Since 2018, the group has quadrupled in size. Yoder asked not to disclose the total number of members because he doesn’t want others potentially interested to be intimated by the sheer volume. He instead emphasized the team’s camaraderie and that he welcomes folks of different shapes, sizes, ages and stages of life.

About half of YP’s members are from Lancaster County, including Yunginger, who was a standout soccer and basketball player in her prep days at Donegal.

When she was younger, Yunginger was also a member of the now-defunct Mount Joy Swim Team for about three years. It was the last time she swam competitively until joining YP last year.

She had been biking in her adult years, often on rides on the back roads of Mount Joy with her husband (Donegal alum and former Indians’ tennis standout Mitchell Ebersole) or father (former Donegal and Lancaster Mennonite basketball standout Richard Yunginger).

She placed second in her age group in the Hempfield Triathlon in September, the first triathlon of her career. Yunginger, 25, has since worked with Yoder to improve her running and swimming abilities: shortening her stride in the run portion in an effort to take more, faster steps, while increasing her stroke rate with her arms while swimming in order to move faster in the water.

“She is coachable in that she does what I ask her to do,” Yoder said. “But she’ll question why we’re doing what we’re doing. She can be a little stubborn, but that also makes her tough in training and racing.”

Now a Lancaster city resident, Yunginger works from home as a consumer and retail data analyst. She trains twice a day, in the morning before and the evening after her workdays.

“It feels different than when I played team sports, and I also feel a lot more in shape,” she said. “When you’re exercising twice a day, seven days a week. ... you get kicked into shape pretty quick. I feel really good. It’s nice to feel in shape.”

Her performance at St. George, Utah, qualified her for the Ironman 70.3 World Championship in September. That also will be held at St. George.

She also has plans to purchase a new set of goggles.

“The goggles I have are the same ones from when I was 13,” she said.

Asked what her goal is now given her accomplishments early on in the sport, Yunginger said she’s not thinking too far in advance, that she’d like to see how fast she can get.

But her future looks bright.

“I don’t ever like to put pressure on anyone with results or what they can do,” Yoder said. “What I’ll have her do is do what we have always done. Continue to do the work, learn from the race experience, and learn what you can do to get better. That’s how she reaches her potential.”

Andrew Yoder knows very well what it means to feel grateful. Has known it for quite some tim…

Hempfield alum Andrew Yoder drops by the LNP studio on episode No. 84 of the "Inspirational …

Many folks may have spent their Saturday morning indoors watching the Royal Wedding on TV. M…

Wearing masks in schools and Fulton Theatre's return: 8 articles to read this Monday

Too busy enjoying the spring weather this weekend to login and get your dose of LNP | LancasterOnline?