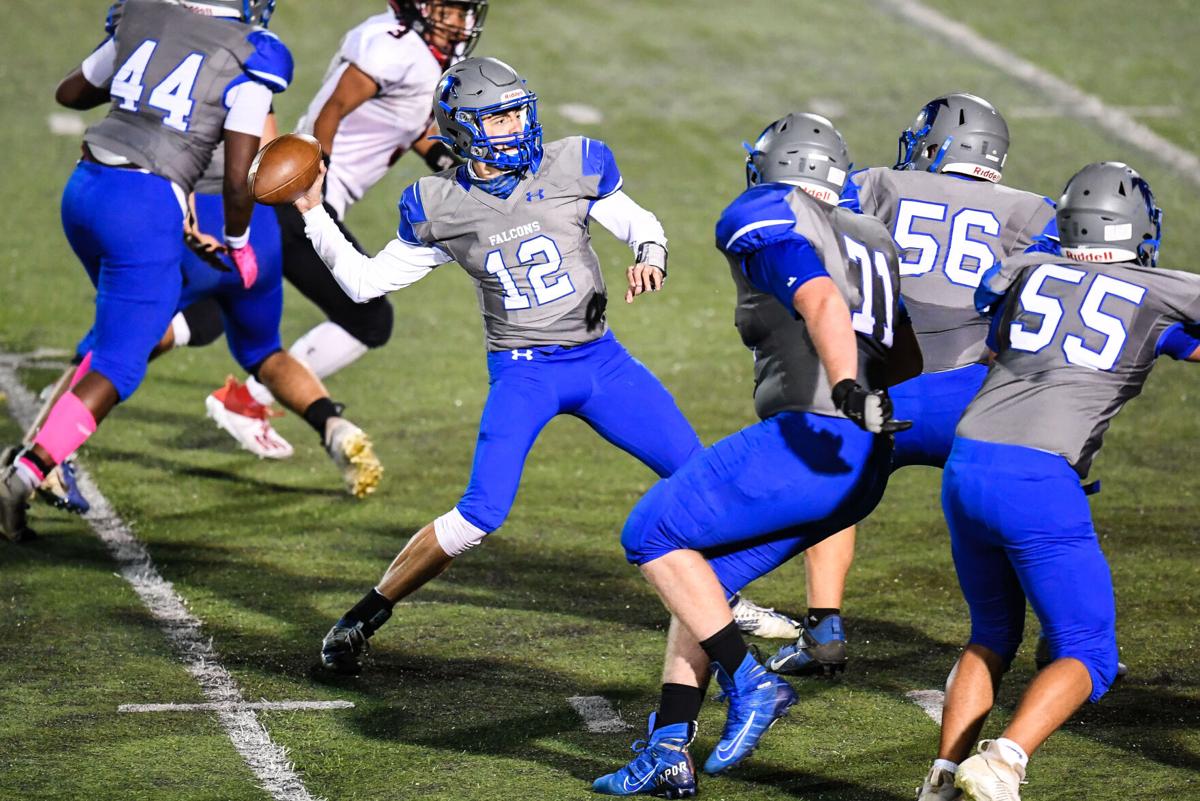 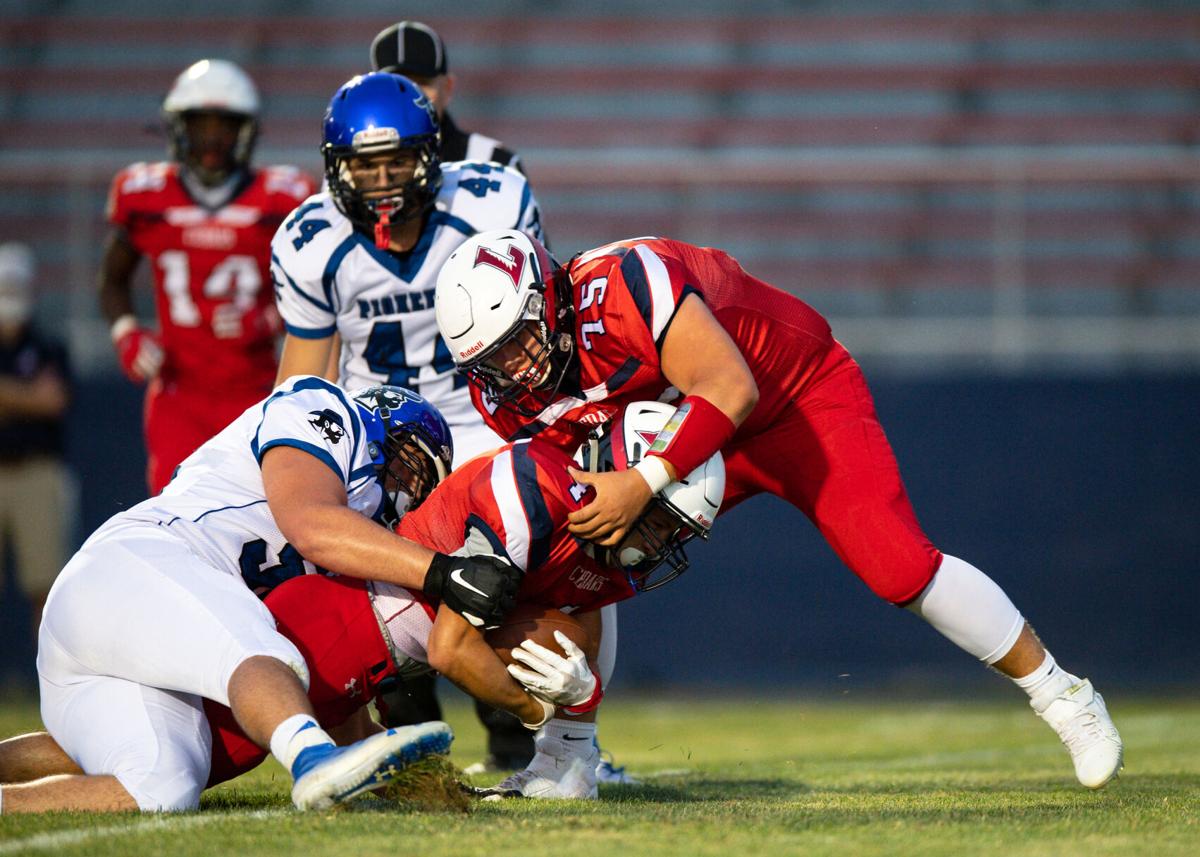 Lebanon’s Matt Brown crosses the goal line for a rushing touchdown against Lampeter-Strasburg in Lebanon’s Alumni Stadium on Friday, Sept. 25, 2020.

Lebanon’s Matt Brown crosses the goal line for a rushing touchdown against Lampeter-Strasburg in Lebanon’s Alumni Stadium on Friday, Sept. 25, 2020.

1. There is perhaps no hotter back in the L-L League than Lebanon’s Matt Brown, who is coming off back-to-back eye-popping performances: On Oct. 2 at Ephrata, he took the rock 25 times for 190 yards with three TD runs — all in the fourth quarter, in the Cedars’ come-from-behind 31-20 victory over the Mountaineers. This past Friday, in a home tilt against Garden Spot, Brown scooted for 158 yards on 21 touches with another TD, in Lebanon’s 35-23 win as the Cedars improved to 2-1 in Section 3 and to 3-1 overall. Their lone loss was against undefeated Lampeter-Strasburg. ... Brown has 348 yards on 46 touches with four TD romps in the last two games, and 374 yards and six scores overall for Lebanon, which will go for three wins in a row on Friday when the Cedars head to Lancaster Catholic, which is 0-4 and itching for some traction. The Crusaders’ top priority: Limiting Brown, who has been mega tough to slow down.

BONUS NUGGET: ANNVILLE-CLEONA HELMET STICKERS — The Little Dutchmen KO'd James Buchanan 47-22 in the rain in a nonleague game on Monday evening. A pair of helmet stickers to two A-C 100-yard backs; Rogan Harter gobbled up 131 yards on just eight carries with three TD runs — all in the second quarter — that covered 54, 6 and 41 yards, respectively. And Alex Long rushed for 109 yards on 15 totes with three TD runs of his own, covering 27, 3 and 5 yards, as A-C improved to 2-2. Long's 27-yard TD romp on the Dutchmen's first play from scrimmage got the party started. A-C rushed for 368 yards in all vs. the Rockets.

2. Elizabethtown needs to stop the bleeding; after a rip-roaring 42-6 Week 1 win at McCaskey, the Bears have dropped three games in a row, including setbacks against Section 2 co-leaders Solanco and Warwick, and a 10-7 defensive-fest nod against Conestoga Valley. ... E-town’s next tester: Cocalico and its ground-and-pound rushing attack, which will welcome the Bears to Denver on Friday. The Eagles, who got back into the dub column with a 33-7 victory over CV this past Friday, have hammered out 1,199 rushing yards, second-most in the L-L League behind Elco, which has amassed 1,484 ground stripes. Cocalico averages 378 yards a game, and QB Carson Nash (275 rushing yards, 7 TD) and breakaway backs Anthony Bourassa (459 yards, 7 TD), Steven Flinton (134 yards) and Brycen Flinton (112 yards, 2 TD) can all scoot; Nash went for 116 yards with two TD keepers last week vs. CV, and Bourassa came out of the weekend as the third leading rusher in the league, behind Elco QB Braden Bohannon (599 yards, 10 TD) and Hempfield RB Tanner Hess (479 yards, 8 TD). ... Safe to say E-town must wrap and tackle against Cocalico, so keep an eye on a pair of D-linemen to clog plenty of holes: DT Gavin Gray (15 tackles, 2 for losses, 1 fumble recovery) and DT Justin Black (18 tackles, 3 for losses, 1 forced fumble) are in the middle of a Bears’ defense that is allowing 242 yards a game, with nine takeaways, four sacks and 21 tackles for losses. Pretty solid numbers across the board, true. But Cocalico, with its Veer look and weapons aplenty — plus a stud O-line up front — is kind of a different animal. Bears and Eagles — oh my — Friday in Denver.

BONUS NUGGET: For the third time this season, and for the second time in a week, an L-L League football game has been postponed because of positive COVID-19 tests in a school district. And that school district is Penn Manor, which has gone to virtual learning and no extracurricular activities until at least next Monday. The Comets' home Section 1 football game on Friday vs. McCaskey has been postponed. The Red Tornado has sent out feelers looking for a replacement game on Friday or Saturday of this week. No makeup date yet for McCaskey vs. Penn Manor; the Comets did schedule a nonleague game vs. Conestoga Valley on Nov. 6. We'll see if the league pushes that game back so Penn Manor and McCaskey can play their Section 1 game on Nov. 6. Stay tuned. ... Positive COVID-19 tests also led to the postponement of CV vs. Daniel Boone back in Week 1, and Annville-Cleona vs. Pequea Valley this past Friday.

BONUS NUGGET: McCaskey has added a game for this weekend; the Red Tornado will play at Harrisburg on Saturday at 1 p.m. in a nonleague tussle. ... McCaskey's Section 1 game on Friday against Penn Manor was postponed because of positive coronavirus tests at PM, and no makeup date has been announce. So the Tornado, which is trying to snap a 21-game losing streak, picked up Harrisburg, which won D3 titles in 2007, 2016 and 2018; the Cougars fell to rival Central Dauphin in last year's D3 finale. ... Harrisburg was given the thumbs-up to return to fall sports just last week, and the Cougars toppled Berks Catholic 62-28 in their opener last Friday. They are trying to wedge in the minimum four games before the D3 power-points race closes on Oct. 26. ... Harrisburg and McCaskey haven't met since a home-and-home nonleague set in 2014-15; the Cougars won both of those games: 46-21 in 2014 and 40-6 a year later. ... Harrisburg also has games set for Oct. 31 against Chambersburg, Nov. 6 at Manheim Township, and Nov. 13 at Cumberland Valley — but those games are all after the D3 deadline to qualify for the postseason.

3. Cedar Crest is 1-3, yes. But the Falcons have been tough to defend, especially through the air, as QB Chris Danz and his merry band of receivers have been stretching a lot of opposing defenses. Like last week, when Danz uncorked 25 completions for 278 yards against Hempfield; Nate Brightbill hauled in 10 of those catches. Danz (67 of 134, 4 TD) has 757 air yards, third-most in the league, behind Lebanon’s Isaiah Rodriguez (907 yards) and Columbia’s Robert Footman (798 yards), and Brightbill (23 catches for 197 yards, 1 TD), Ethan Heisey (15-305, 2 TD) and Brayden Koehler (11-110) have all been tough to mark on the flank. ... Cedar Crest heads to West Lawn on Friday for a crack at Wilson, which is riding a 3-game winning streak and is tied atop the Section 1 heap with Hempfield, whom the Bulldogs will welcome a week from Friday. So they can’t get caught looking ahead here against the pass-happy Falcons. Wilson’s defense has been a heck of a lot better since the Bulldogs’ 48-7 Week 1 setback against backyard rival Governor Mifflin; Wilson is tops in Section 1, allowing 269 yards a game, and the Bulldogs have yielded 492 passing yards, least among Section 1 teams. Safe to say Wilson’s secondary will be busy against Cedar Crest, so keep an eye on LB Adrian Santana (19 tackles, 3 for losses, 2 sacks, 1 forced fumble) to help out in coverage, and for safety Corey Powers (12 tackles, 1 fumble recovery) to help keep tabs over the top on the Brightbill-Heisey-Koehler pass-catching troika. It would also behoove the Bulldogs to get as much pressure on Danz as possible; when he’s had time, he’s found his targets.

Don’t look now, but there are just three weeks to go in the regular season for the 24 Lancaster-Lebanon League football teams. And there are j…