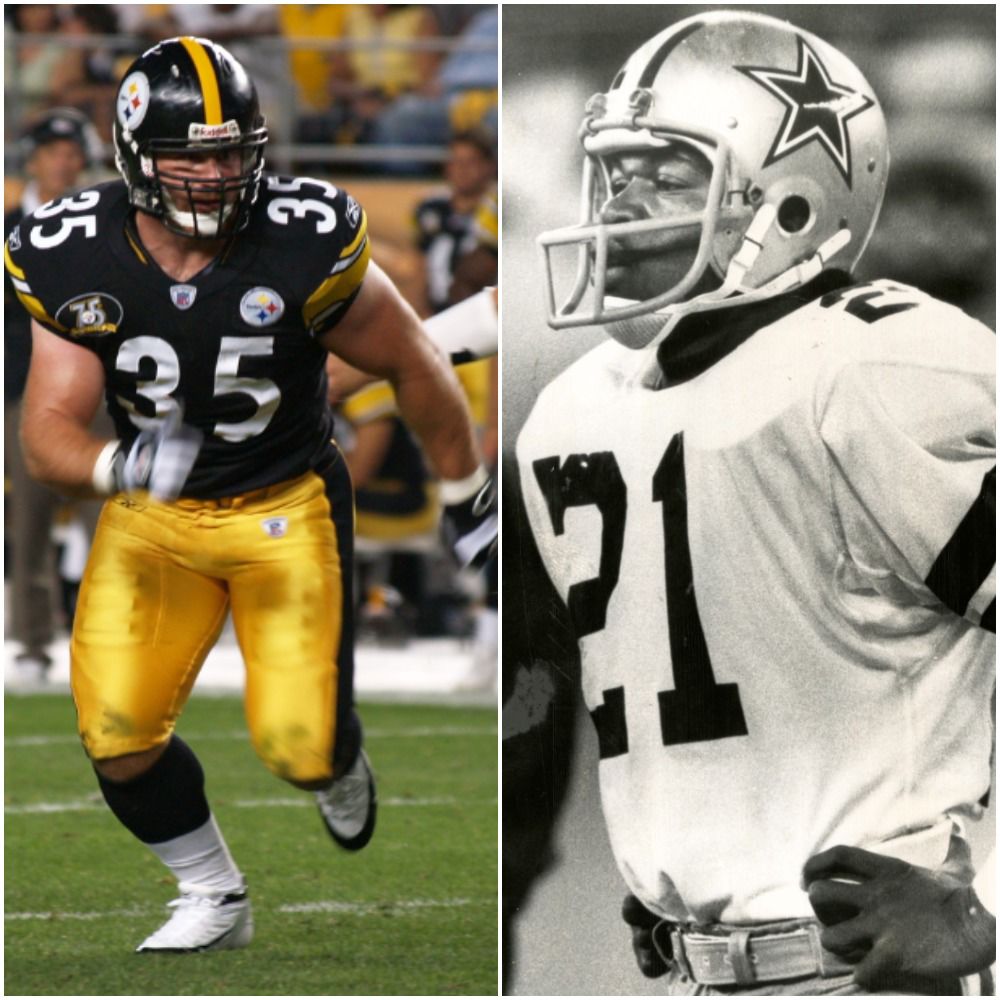 Dan Kreider, left, and Doug Dennison are the only two players from Lancaster County high schools to have participated in the Super Bowl. 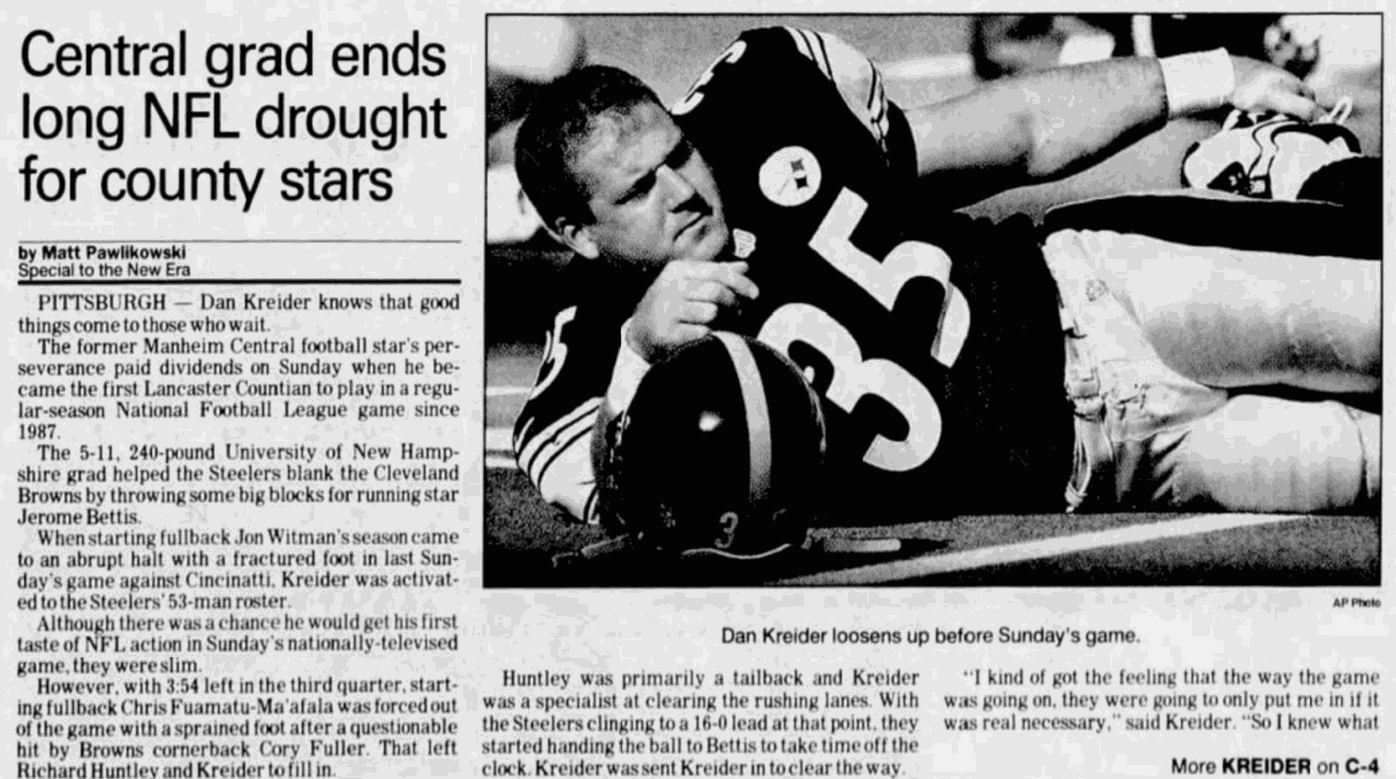 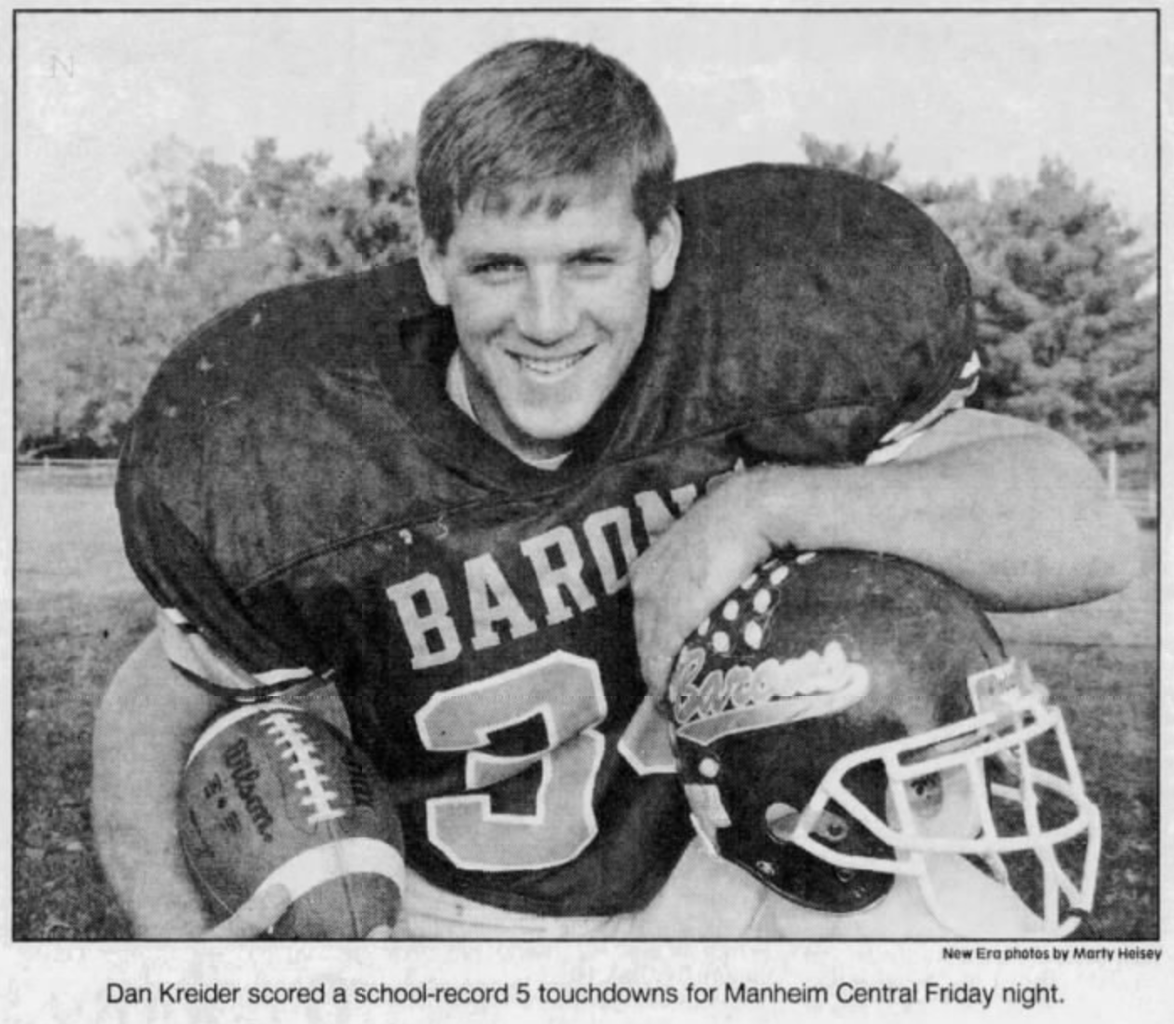 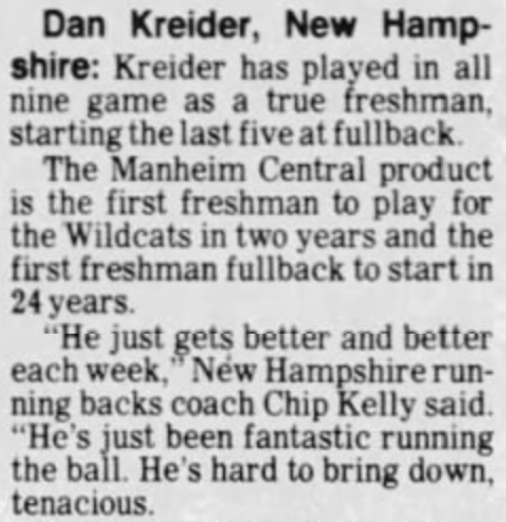 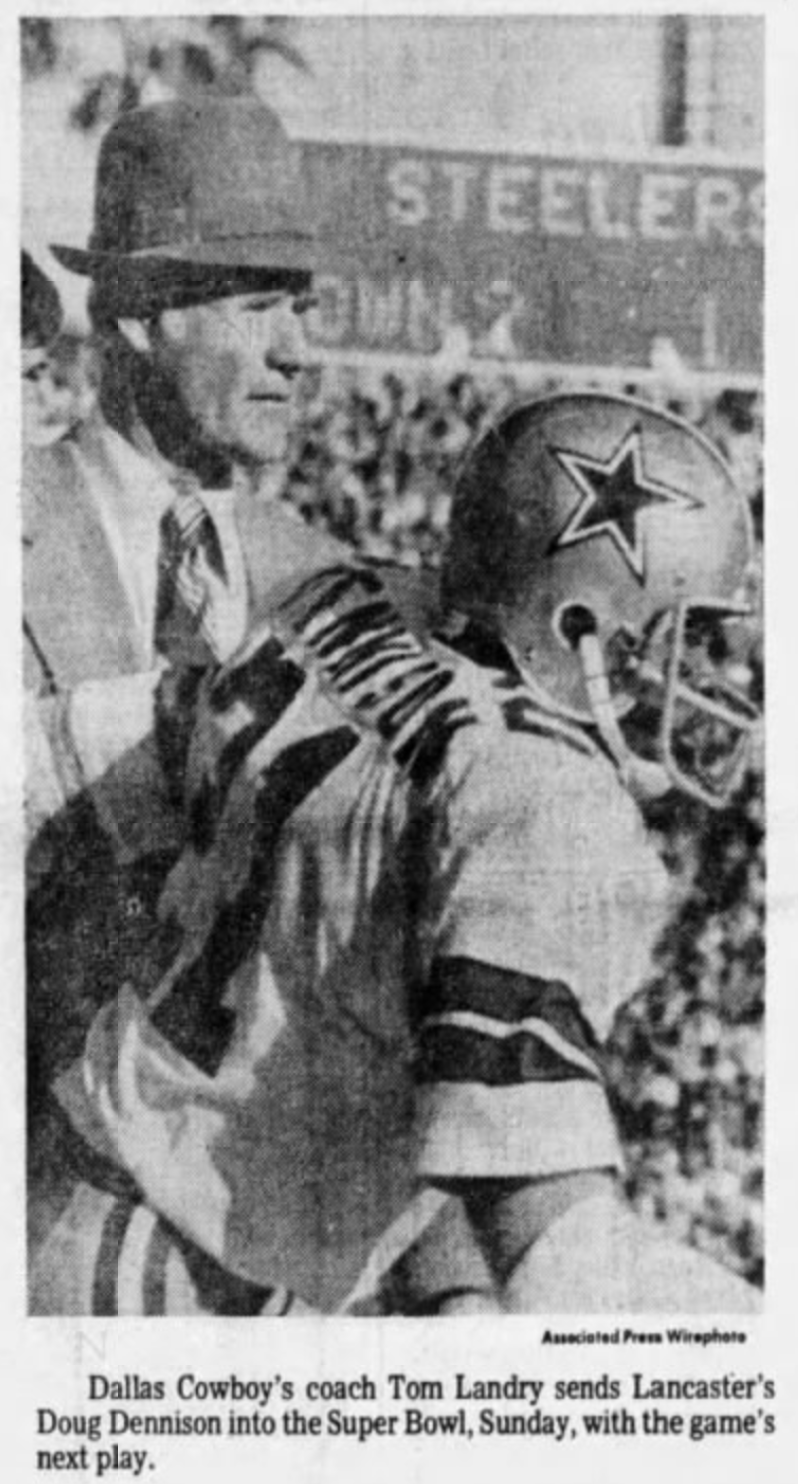 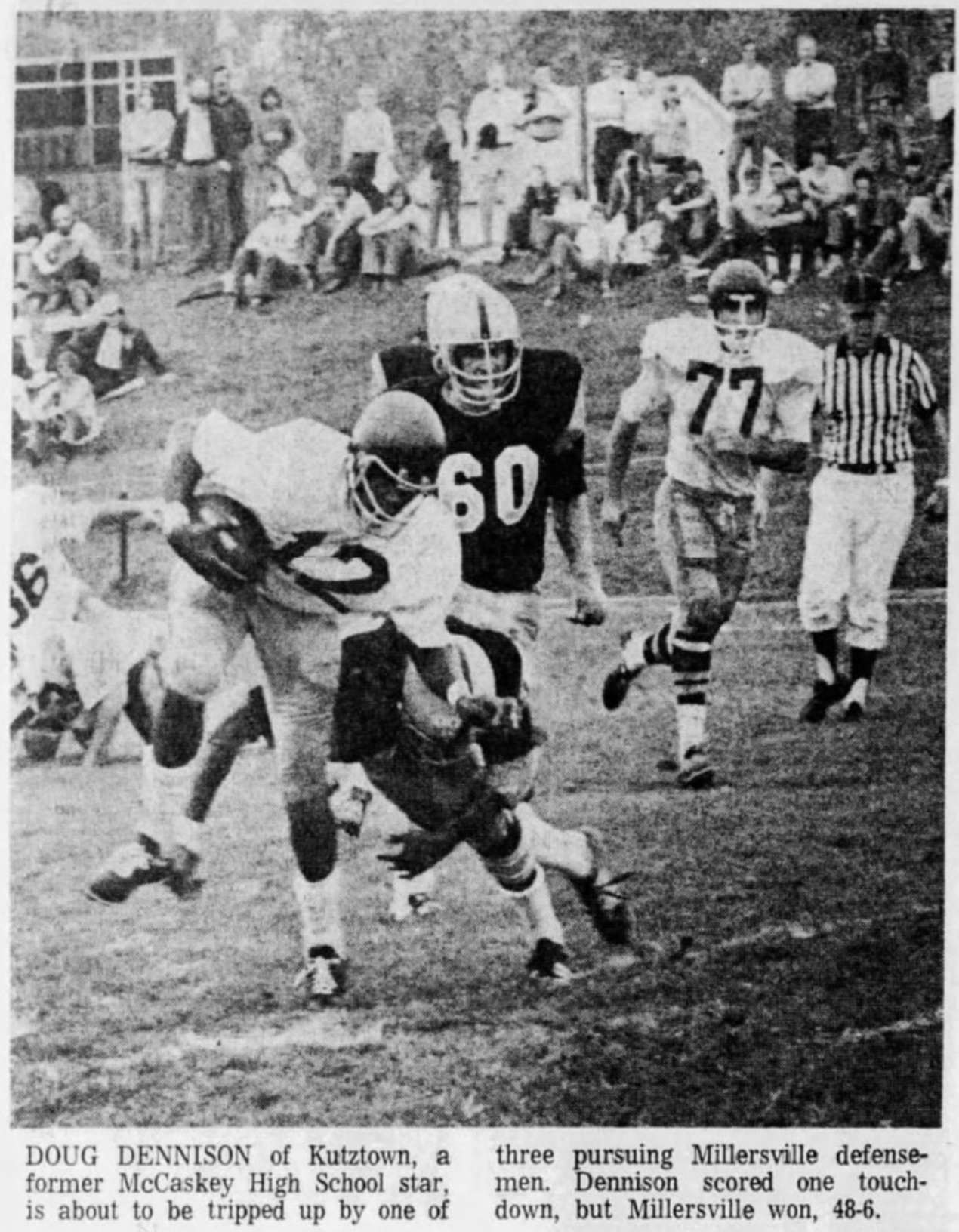 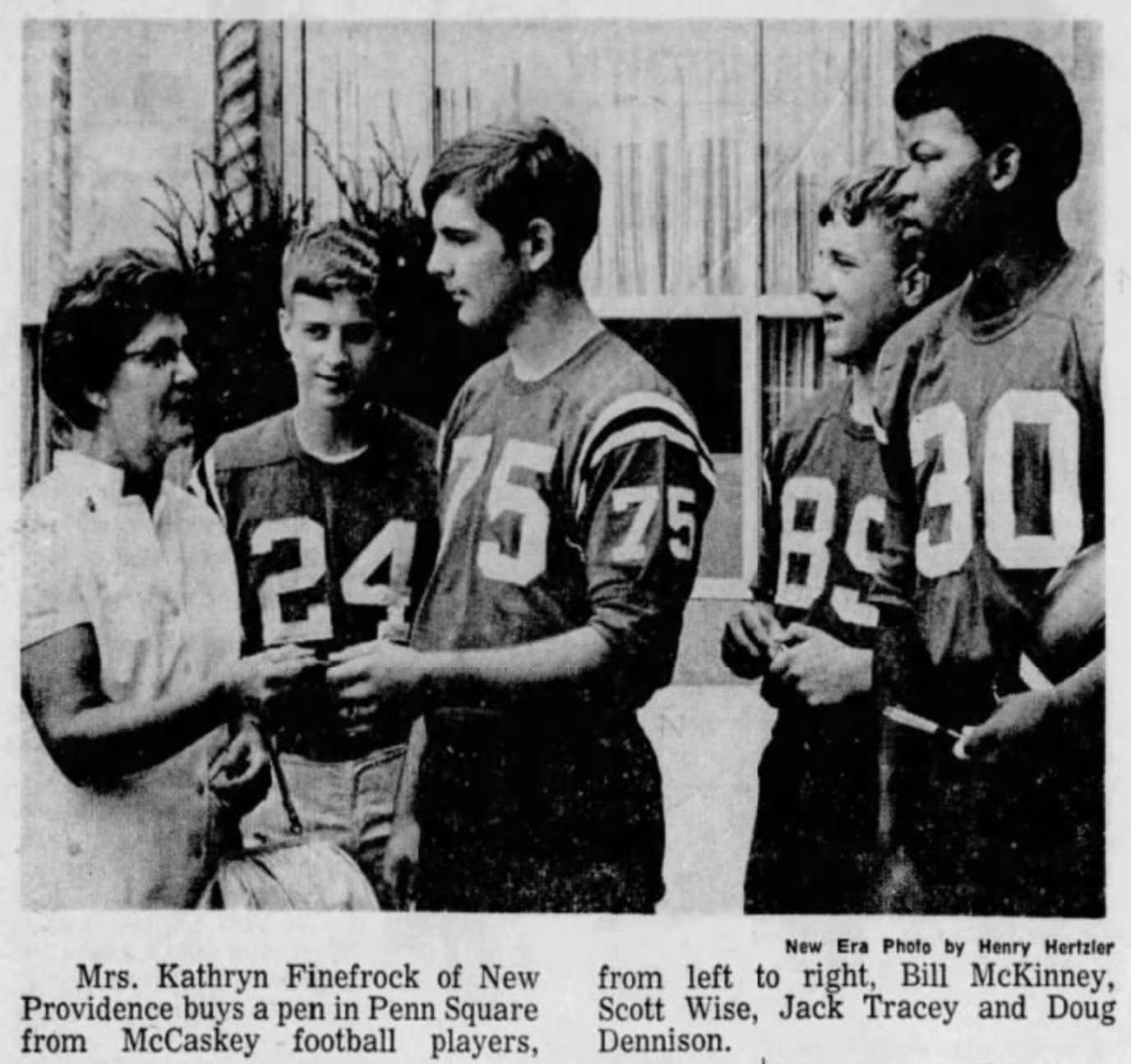 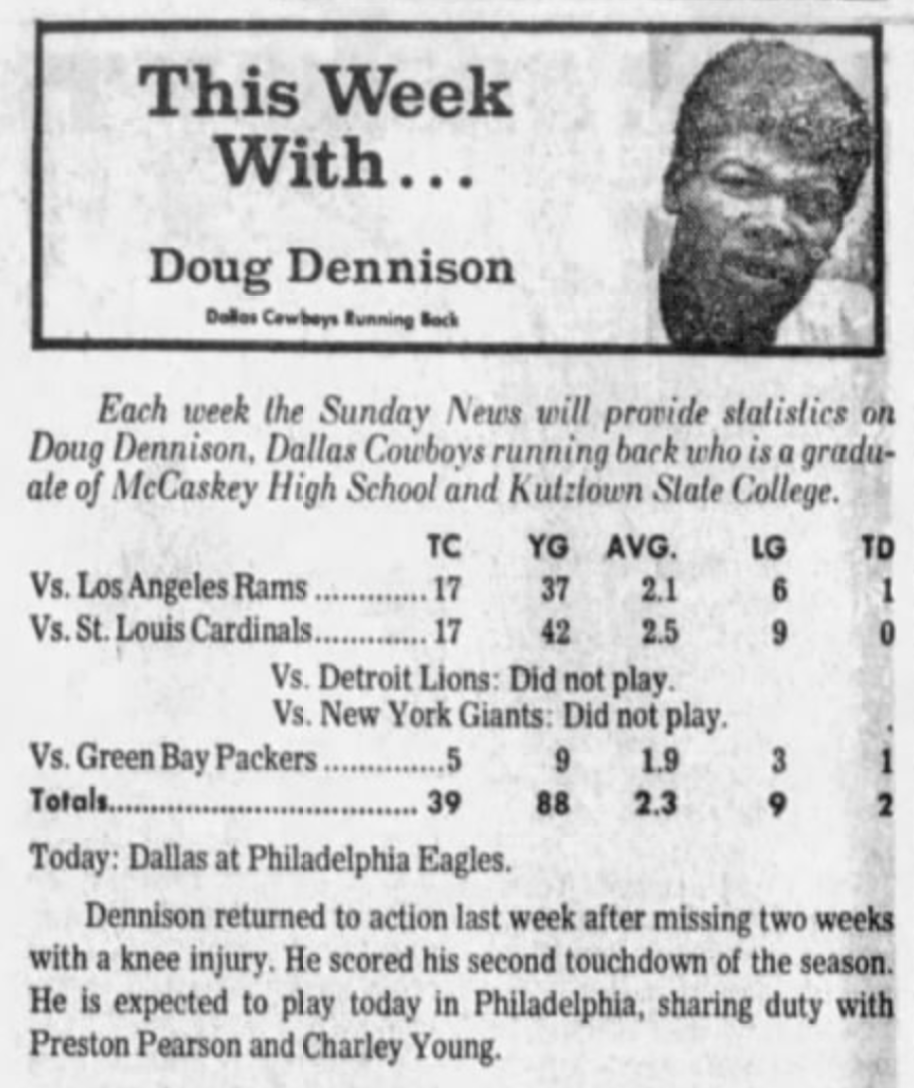 The Philadelphia Eagles and the Pittsburgh Steelers are not in the Super Bowl this year. And there will be no players from Lancaster participating in the big game when the defending champion Kansas City Chiefs and the Tampa Bay Buccaneers play in SB LV Sunday.

But there have been two players who are who are products of Lancaster County high schools who have played in past Super Bowls. Dan Kreider, a Manheim Central grad, and Doug Dennison, a McCaskey grad, were both members of Super Bowl title teams.

Here’s a look at back at the local lads who became NFL champions.

Kreider was a member of the Pittsburgh Steelers team that beat Seattle in Super Bowl XL, which was played Feb. 5, 2006.

Kreider, who mostly made his money as a blocking fullback, rushed for 144 yards on 32 carries in his NFL career. Much of his blocking was to clear a path for Hall-of-Fame running back Jerome Bettis.

Kreider had a stellar career at Central. Playing tight end as a junior he caught 12 passes for 232 yards (19.3 average) and six TDs. Defensively he had 101 tackle points (two points for a solo tackle, one point for an assisted tackle) from his linebacker position.

As a senior running back in 1994, he set season records scoring 32 touchdowns and scoring 194 points. Twice he scored five TDs in one game.

He was named Linebacker of the Year for Section Two of the Lancaster-Lebanon League and earned Section Two first-team honors as both a running back and LB. He also was named to the All-State second team.

Following his senior season, he played in the Big 33 All-Star Game.

Kreider played his college ball at the University of New Hampshire, where his coach was future Philadelphia Eagles boss Chip Kelly.

A four-year starter for the Wildcats, he rushed for 1,602 yards and six touchdowns in his UNH career. He also caught 49 passes totaling 535 yards.

Playing for the Dallas Cowboys, Dennison participated in two Super Bowls in the ’70s. The running back was a member of the Cowboys team that beat the Denver Broncos 27-10 in Super Bowl XIII in January of 1978.

The Cowboys also made it to the Super Bowl following the 1978 season, where they once again lost to the Steelers. But Dennison did not play in that game due to injury.

A short-yardage specialist, Dennison, who was the first NFL player from what was then Kutztown State College, ran for 1,112 yards on 306 carries and scored 19 touchdowns in 52 games for the Cowboys from 1974-78.

During his time in the NFL, the Lancaster newspapers covered Dennison closely, featuring a weekly "This Week with Doug Dennison" feature that tracked his NFL career, one week at a time.

At Kutztown, Dennison averaged 6.4 yards per carry and also played safety in his senior season, which was cut short due to a knee injury. He also excelled on punt and kickoff returns. He was named second team All-PSAC in 1973.

In 1978, Dennison was inducted into the Kutztown Hall of Fame.

A 1970 McCaskey grad, Dennison was a track star in addition to his football prowess and he also played basketball. As a senior for the Red Tornado, he won the District Three triple jump and was sixth at states.

He is a member of the McCaskey Hall of Fame.

Coach Chuck and Noll and quarterback Terry Bradshaw both joined the Pittsburgh Steelers on Jan. 27.

The Pittsburgh Steelers selected running back Franco Harris on Feb. 1, 1972 in the first round of the NFL Draft. Harris, a running back out of…

On Jan. 19, 2002, the New England Patriots beat the Los Angeles Raiders 16-13 in overtime to win an AFC Divisional game played in a snowstorm.…

A Doylestown artist’s painting of a former Lancaster business has been recognized in the 37th annual competition by Artists Magazine.

Super Bowl LV: What time does it start, how to watch, and fun facts about the big game [FAQ]

The 55th iteration of the biggest spectacle in American sports is set to be played this Sunday. The Kansas City Chiefs and Tampa Bay Buccaneer…

Twitter reacts to Carson Wentz getting traded from the Philadelphia Eagles

On Thursday, the long-anticipated Carson Wentz trade became a reality.

41 years ago, USA beat Soviets in 'Miracle on Ice' at Lake Placid Olympics

On Feb. 22, 1980, the United States beat the Soviet Union 4-3 in an ice hockey game at the Lake Placid Olympics. It was one of the biggest ups…

59 years ago, Wilt Chamberlain scored 100 points against the Knicks in Hershey [video]

Wilt Chamberlain was considered by many the best basketball player in the history of the game. At least until Michael Jordan came along.