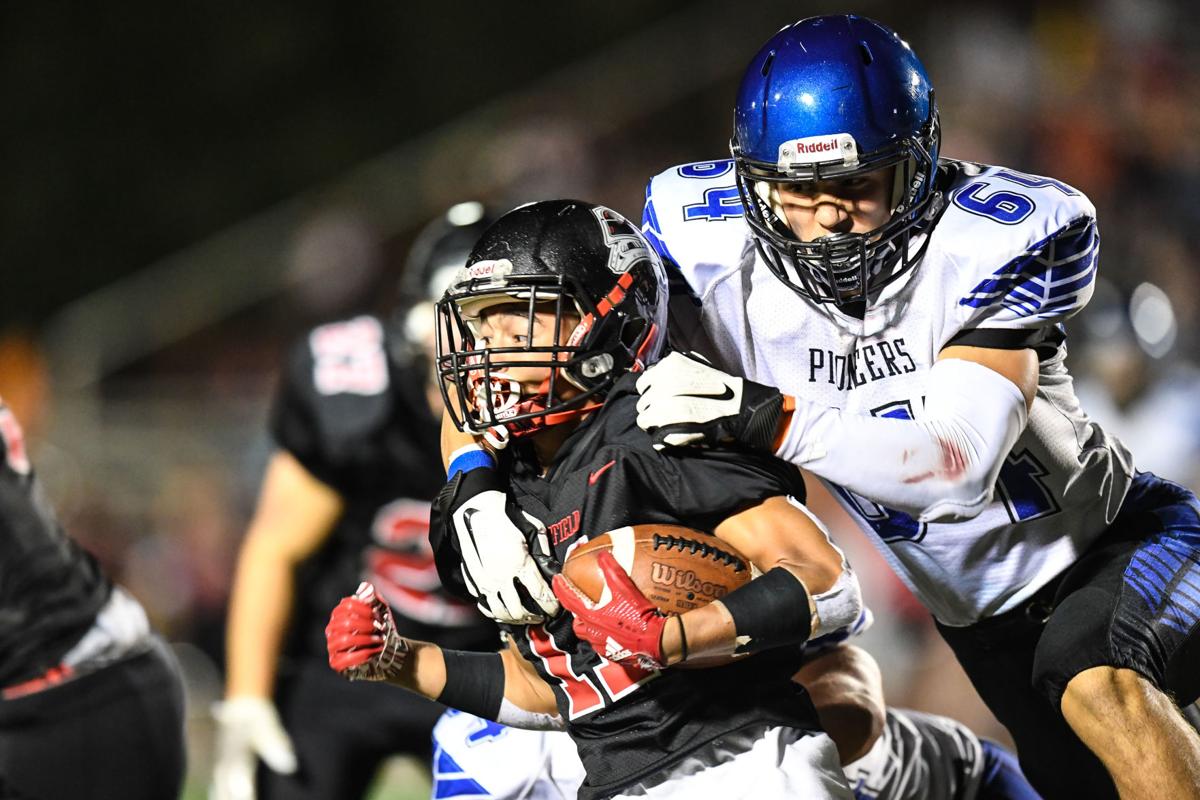 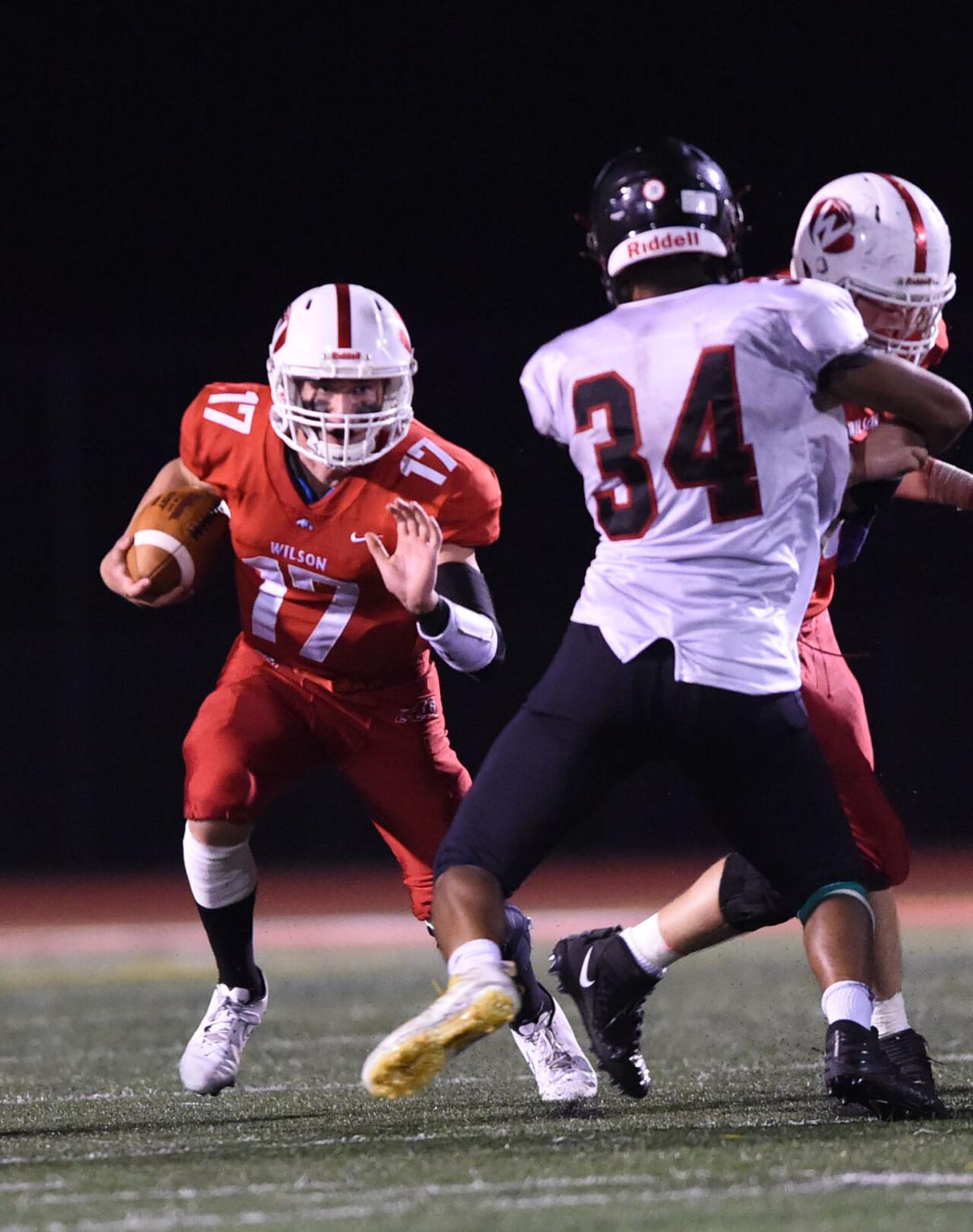 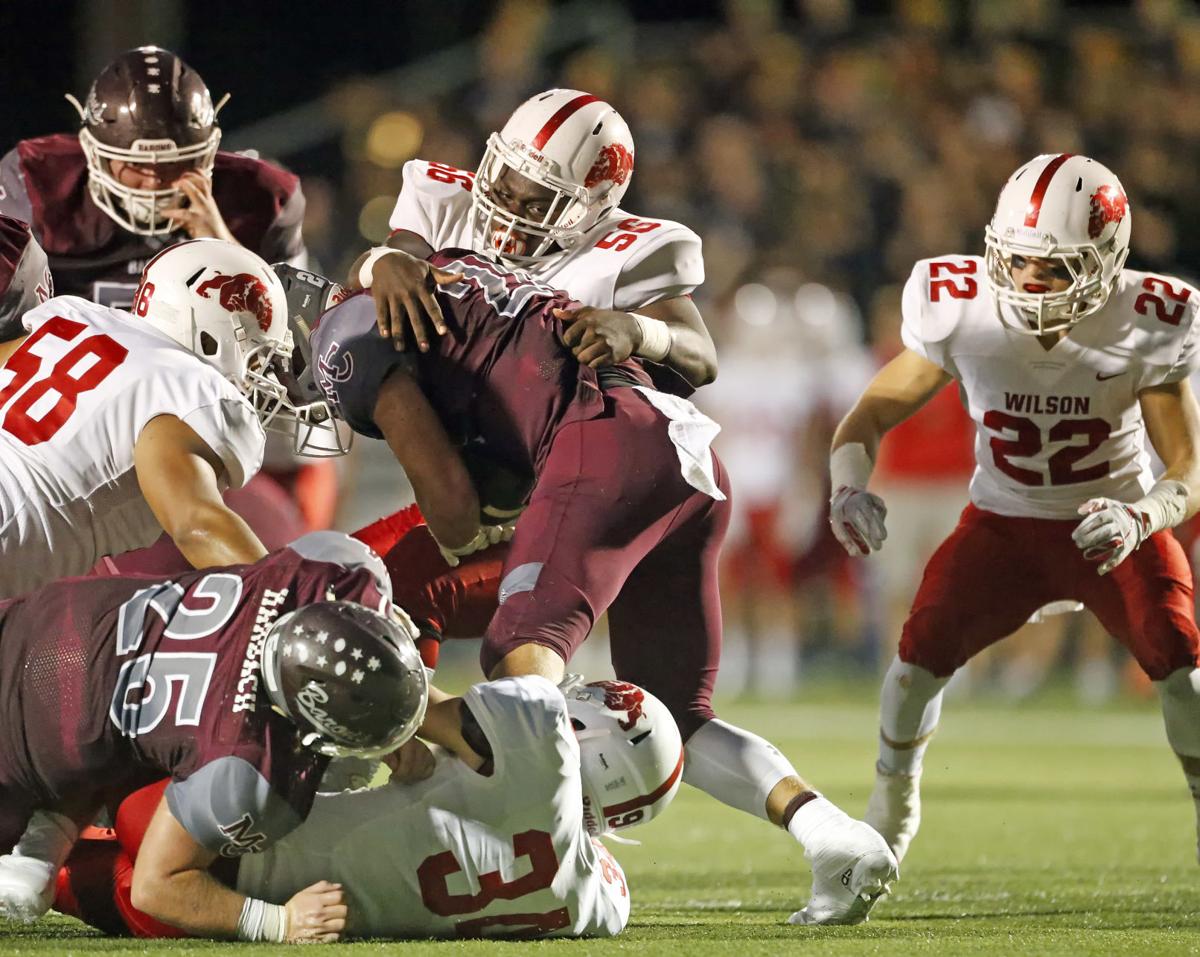 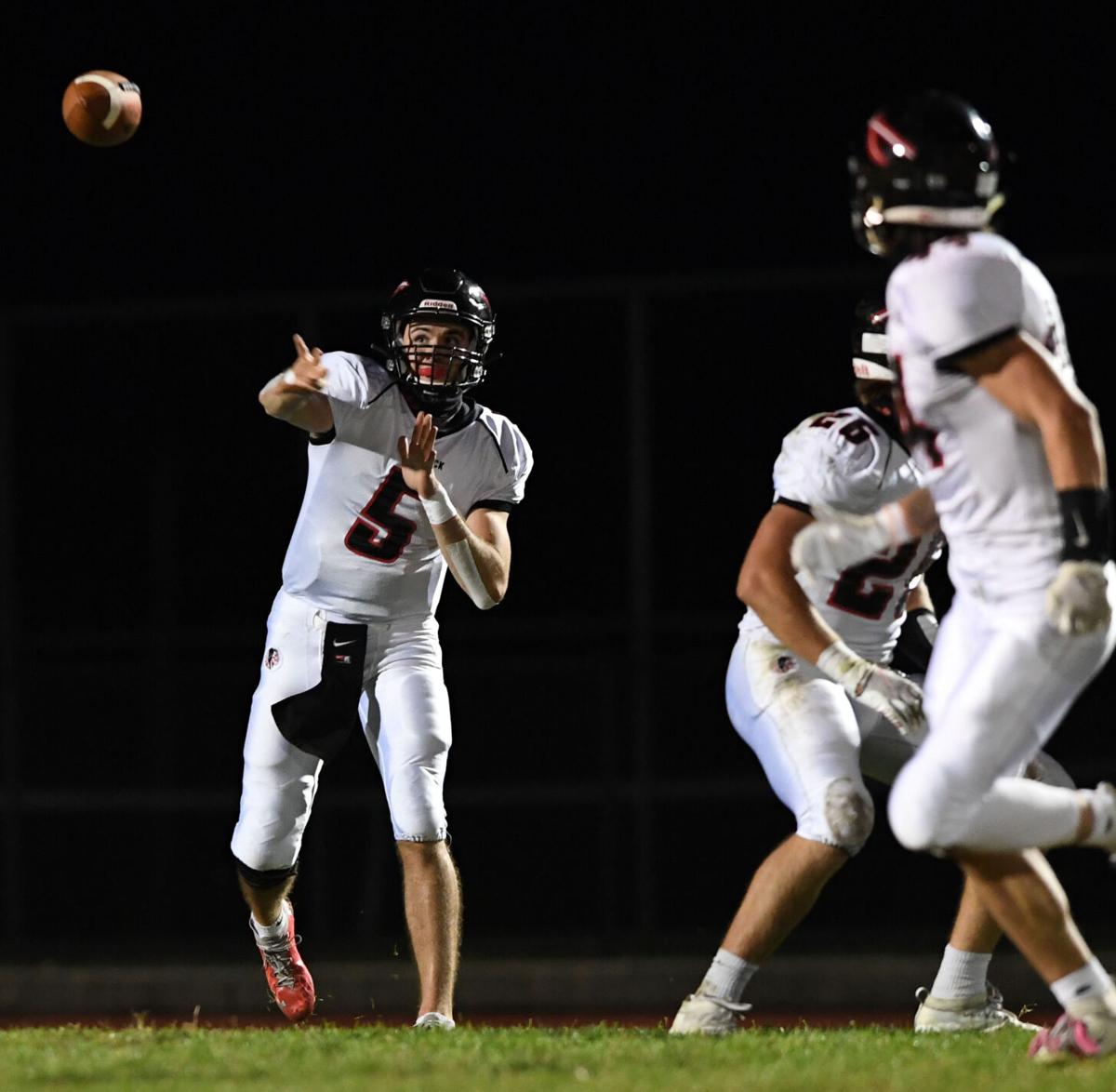 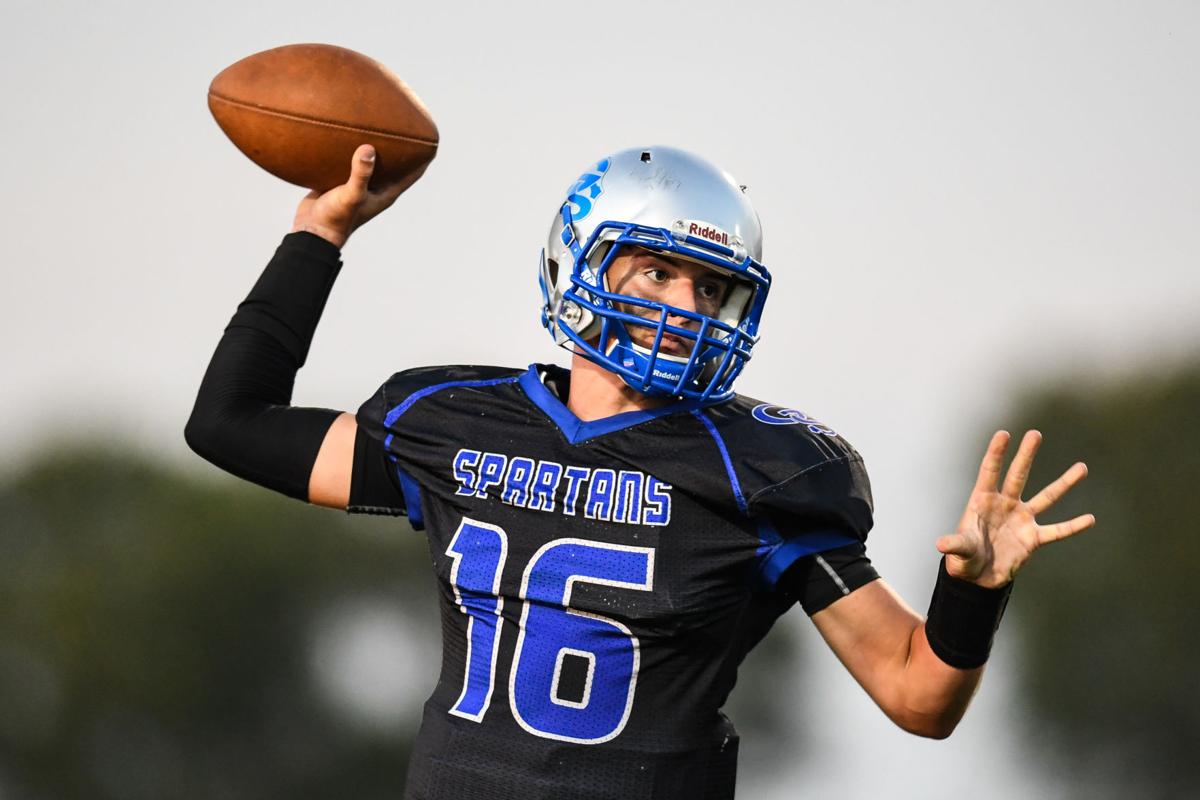 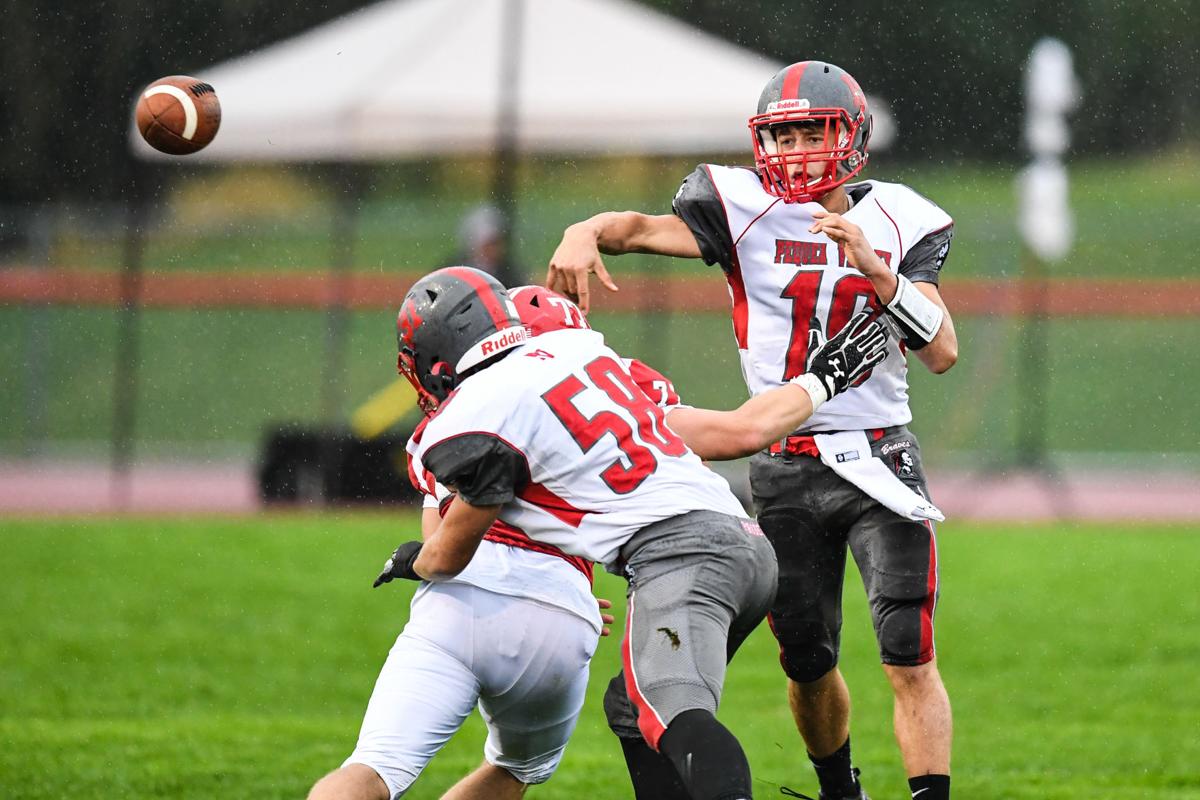 Pequea Valley QB Nate Fisher (19) throws a pass in the flat while under a heavy pass rush from Seth Jamison (77) of Annville-Cleona during L-L League Week 7 football action at Annville-Cleona High School Stadium in Annville on Monday, October 7, 2019.

Pequea Valley QB Nate Fisher (19) throws a pass in the flat while under a heavy pass rush from Seth Jamison (77) of Annville-Cleona during L-L League Week 7 football action at Annville-Cleona High School Stadium in Annville on Monday, October 7, 2019.

The L-L League Quarterback Club has tabbed its top performers from the Week 6 games. Here are their selections …

BACK OF THE WEEK: Kaleb Brown, QB, Wilson — Another game, another big dual-threat night for the Bulldogs’ standout, who came up large in Wilson’s 27-12 win over Hempfield, which locked up the outright Section 1 championship for Wilson. Brown clicked on 8 of 15 passes for 66 yards with a TD toss, but he did his most damage with his quick feet, bolting for 198 yards on 15 carries, including a 35-yard TD keeper.

LINEMAN OF THE WEEK: Jeff Colacin, DT, Wilson — In the Bulldogs’ section-clinching victory over Hempfield, Colacin dominated up front with three tackles, including a pair of stops for losses, plus multiple QB hurries and a blocked kick as Wilson won its fifth game in a row and improved to 5-1.

BACK OF THE WEEK: Joey McCracken, QB, Warwick — Back to playing at 100 percent since returning from a knee injury, McCracken has been firing on all cylinders for the Warriors. In Warwick’s 49-14 triumph over Cocalico, he hit on 12 of 15 passes for 321 yards with four TD strikes, as the Warriors remained undefeated and sewed up the outright Section 2 championship. McCracken chipped in with 26 rushing yards, and he helped Warwick earn the No. 2 seed in the upcoming D3-5A playoffs, while eclipsing 5,400 career passing yards in the process.

LINEMAN OF THE WEEK: Carter May, C, Conestoga Valley — The Buckskins kept rolling with a 31-7 victory over Solanco, and May anchored an O-line effort that helped CV grind out 262 rushing yards and 376 total yards for the Bucks’ third win in their last four games. May had a high blocking grade in the trenches, and he was credited with three pancake blocks in CV’s win.

BACK OF THE WEEK: Jesse Martin, QB-DB, Garden Spot — The Spartans’ standout two-way terror came up big on both sides of the ball in Garden Spot’s 31-8 win over Lancaster Catholic. On offense, Martin called his own number 21 times for 131 keeper yards with a TD run. And on defense, from his safety spot, he was in on 10 tackles — including eight solo hits — with a pair of interceptions. Martin returned one of his picks 32 yards for a TD.

LINEMAN OF THE WEEK: Parker Owens, DE, Lampeter-Strasburg — The Pioneers clinched the outright Section 3 crown with a 54-16 win over Ephrata, and Owens was right in the middle of the defensive fireworks for L-S. He registered eight tackles, with seven solo sticks, plus three stops for losses, a QB hurry, a forced fumble and a pass breakup. Owens also returned a blocked kick 76 yards for a TD as the Pioneers improved to 6-0 and locked up the top seed in the upcoming D3-4A playoffs.

BACK OF THE WEEK: Nate Fisher, QB, Pequea Valley — The Braves beat Northern Lebanon 14-0, snapping their 24-game losing streak in the process. And Fisher had his fingerprints all over PV’s win, hitting on 8 of 16 passes for 88 yards through the air, while rushing for 118 yards on 20 carries with a 20-yard TD keeper, as the Braves won for the first time since the end of the 2017 season.

LINEMAN OF THE WEEK: Andrew Koennecker, OG-DT, Octorara — It was a big night in the trenches for Koennecker, who helped the Braves drop Annville-Cleona 41-13. On offense, he earned a high blocking grade with a pair of pancake blocks, helping Octorara churn out 495 total yards. And on defense, Koennecker chipped in with a tackle as the Braves won their second game in a row and improved to 5-1.

Here are five individual matchups to watch when Lancaster-Lebanon League football teams hit the field for their Week 7 games on Friday ...

Call it the wild and wacky Week 7 of football games around the Lancaster-Lebanon League, with a mixed bag of matchups on the schedule.

Inside the numbers heading into Week 7 games: 3 L-L League football facts for Oct. 30

The seventh week of L-L League football is upon us.