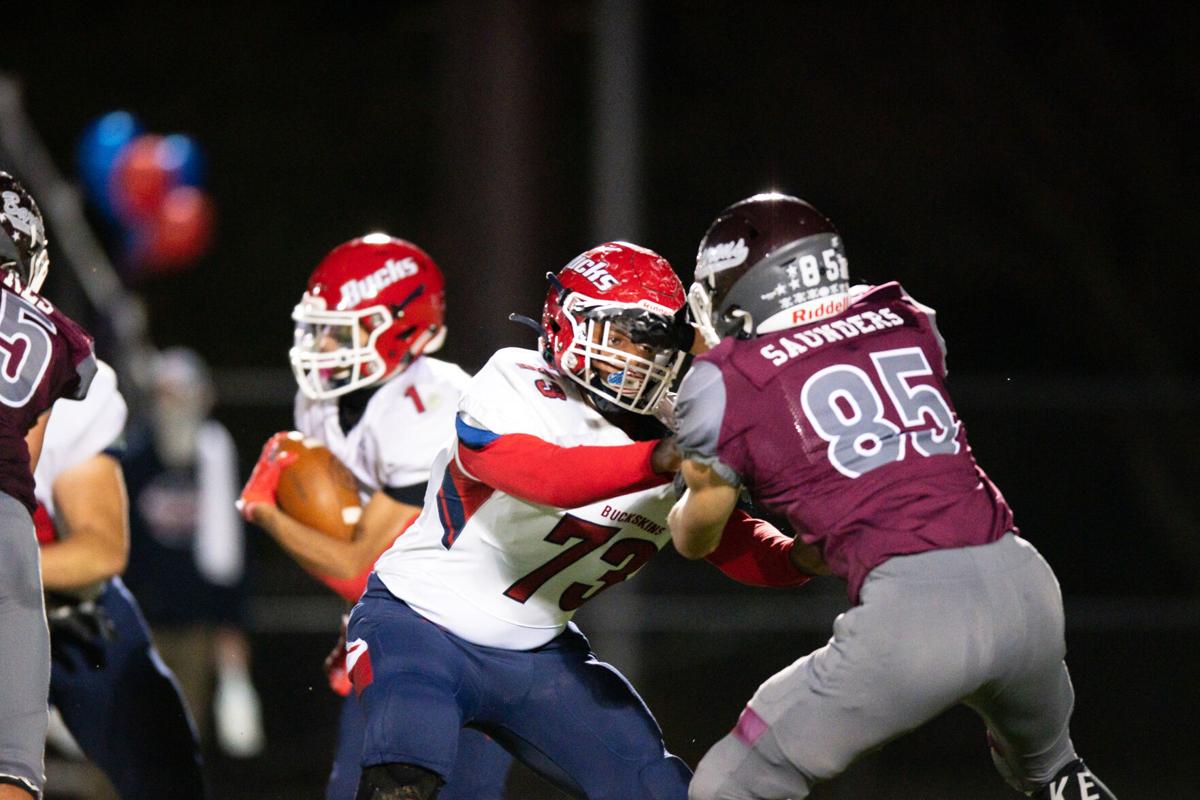 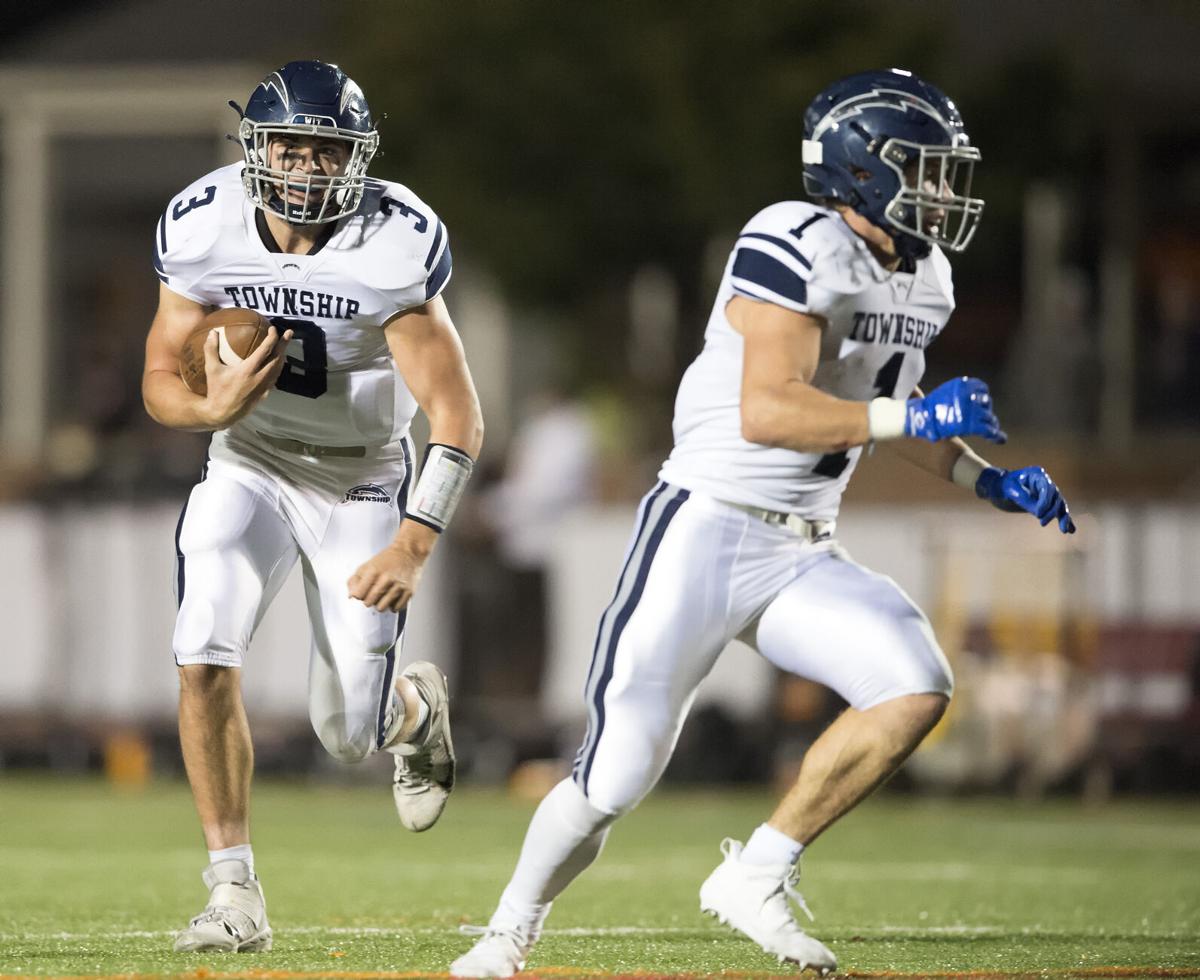 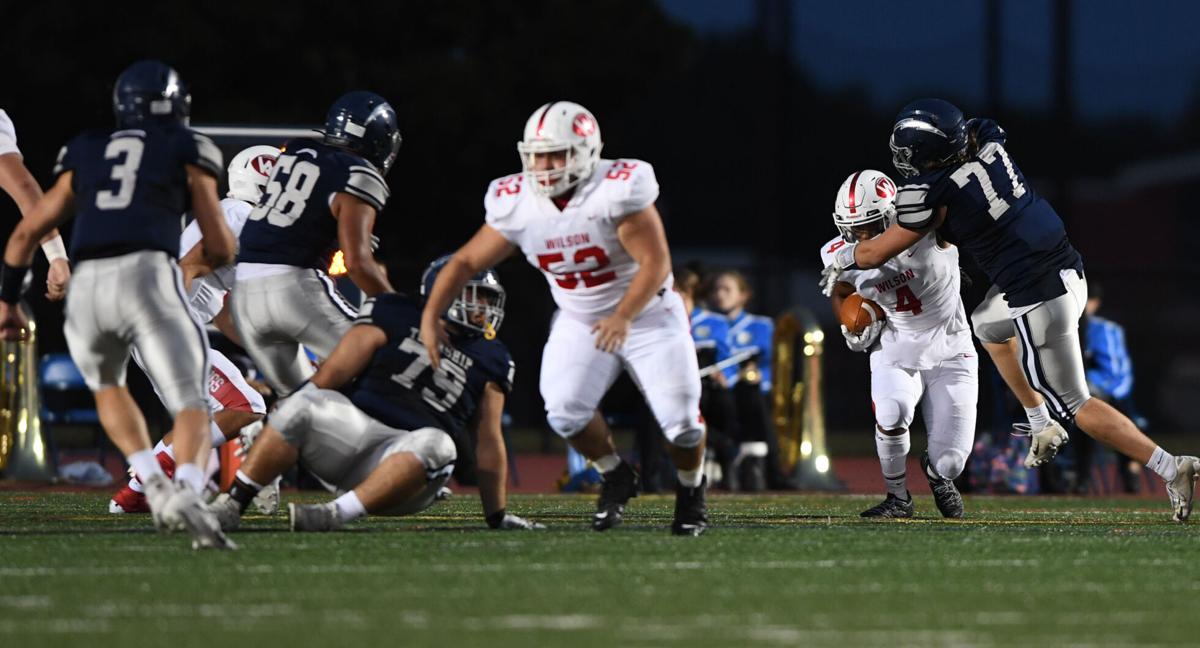 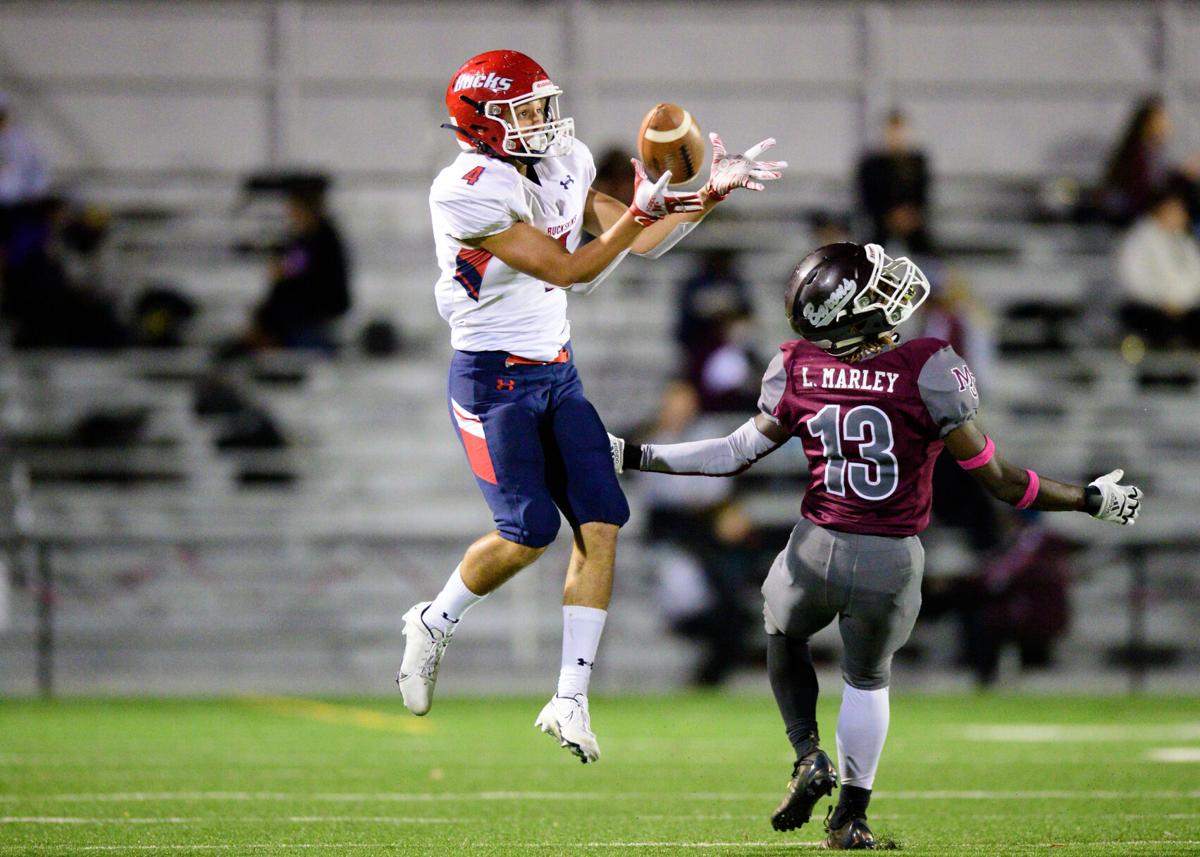 Conestoga Valley’s Zach Fisher jumps to make a reception against Manheim Central’s Larry Marley at Manheim Central High School on Friday, Oct. 16, 2020. The reception from Fisher amounted to a 60-yard catch and run touchdown, helping to ignite the Buckskins’ offense. 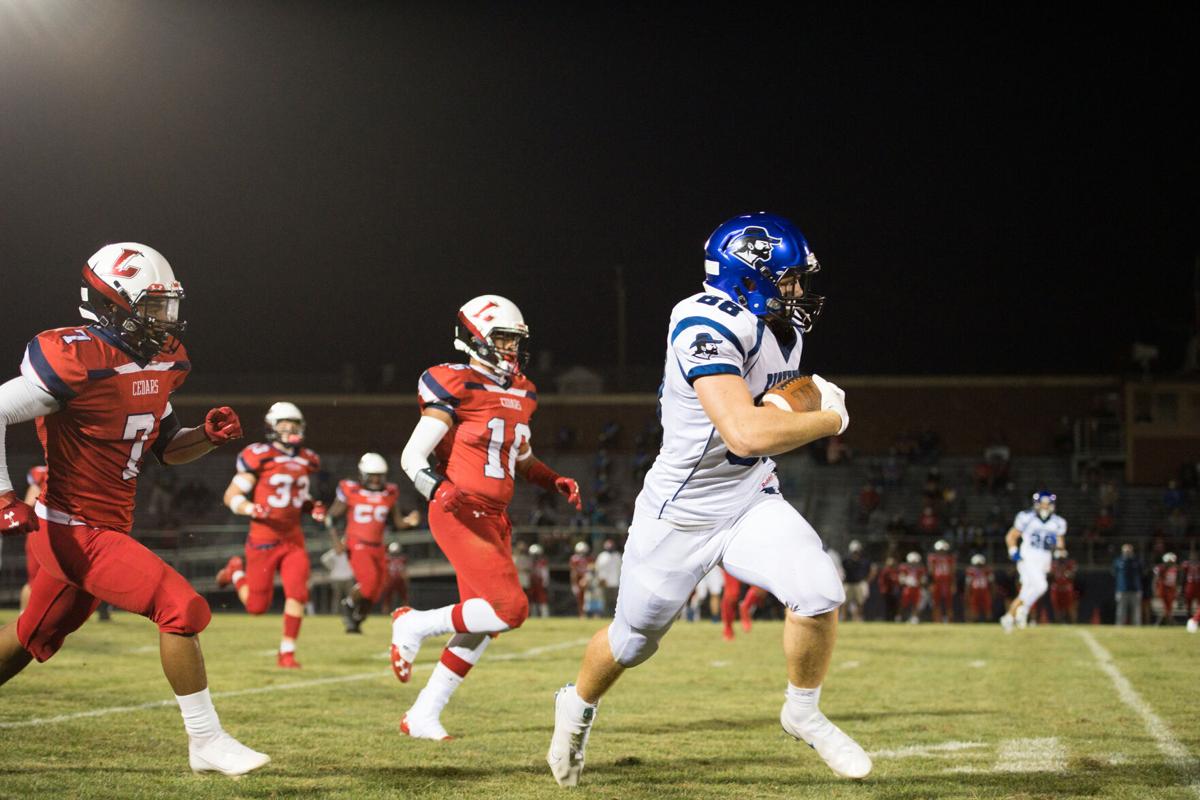 Lampeter-Strasburg’s Beau Heyser is chased down the sideline by Lebanon’s Darryl Reed at Lebanon’s Alumni Stadium on Friday, Sept. 25, 2020. 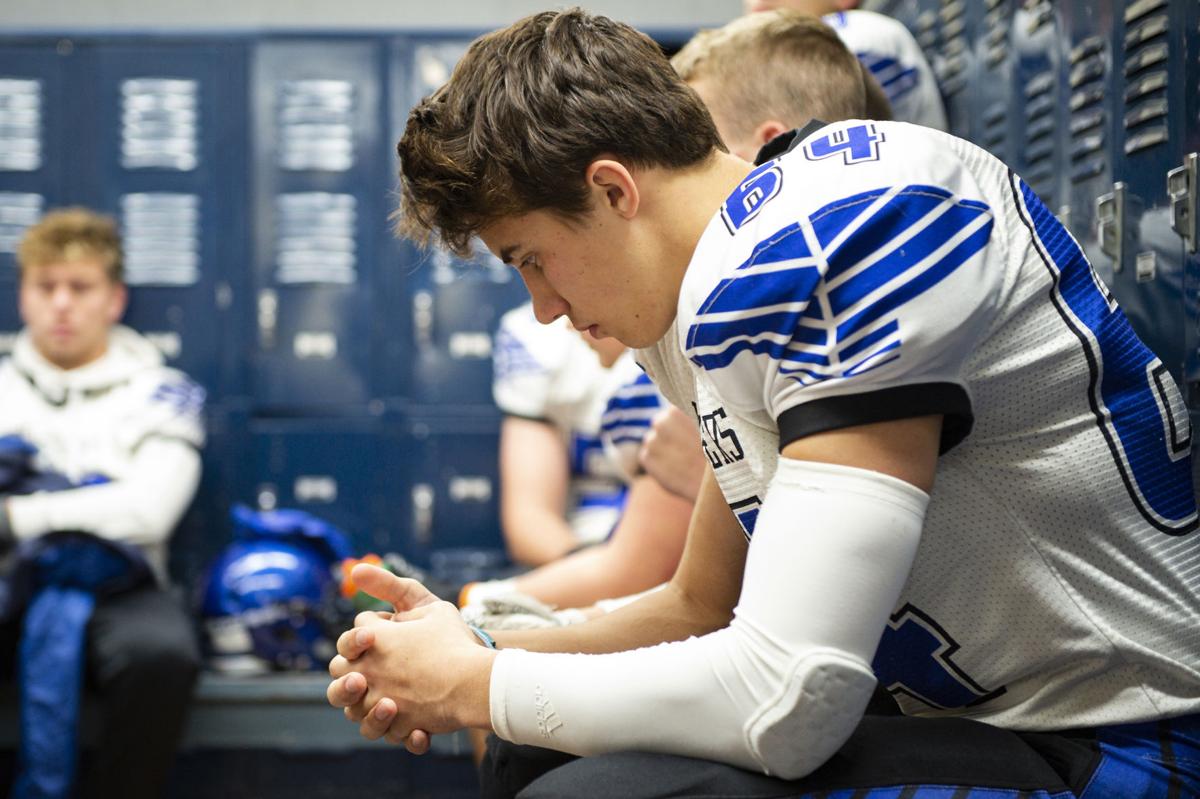 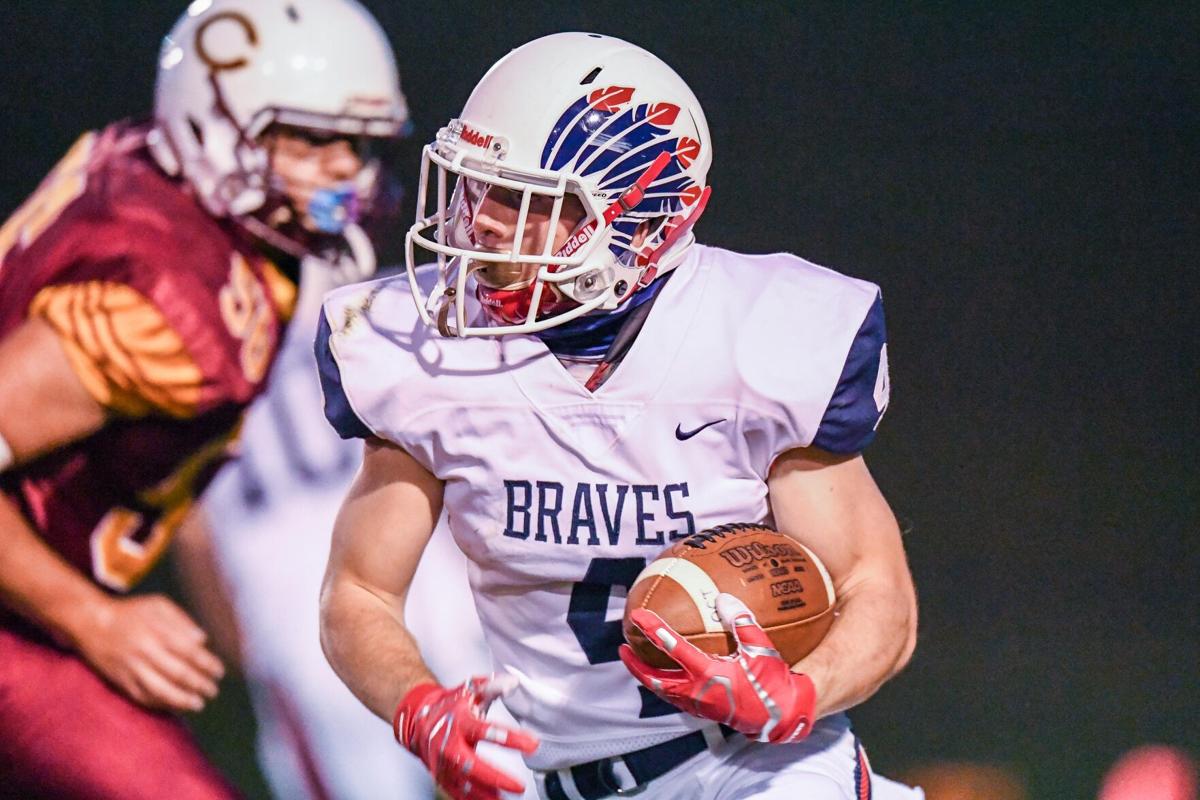 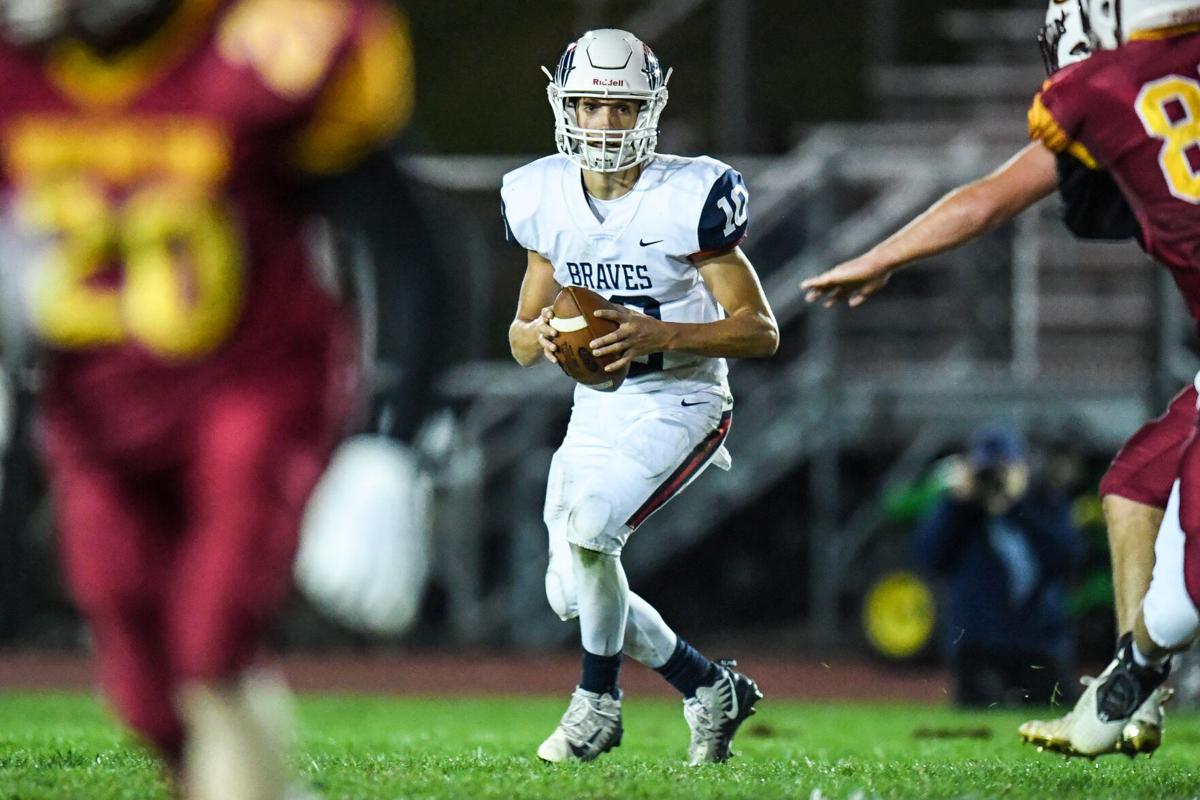 Conestoga Valley’s Zach Fisher jumps to make a reception against Manheim Central’s Larry Marley at Manheim Central High School on Friday, Oct. 16, 2020. The reception from Fisher amounted to a 60-yard catch and run touchdown, helping to ignite the Buckskins’ offense.

Lampeter-Strasburg’s Beau Heyser is chased down the sideline by Lebanon’s Darryl Reed at Lebanon’s Alumni Stadium on Friday, Sept. 25, 2020.

The L-L League Quarterback Club has released its top performers list from the Week 5 games. Here are their selections:

BACK OF THE WEEK: Evan Clark, QB-DB, Manheim Township — The Blue Streaks’ dual-threat weapon had a big night on both sides of the ball in Township’s 49-7 victory at rival Hempfield. Clark clicked on 9 of 12 passes for 257 yards with a TD pass, and he scooted for 88 yards on 12 carries with a pair of TD keepers, covering 8 yards and 1 yard, respectively. On defense, Clark registered a pair of solo tackles as the Streaks won their third game in a row.

LINEMAN OF THE WEEK: Luke Kelley, OT-DE, Manheim Township — The Streaks’ interior-line stalwart anchored an O-line unit that helped Township crank out 522 yards of total offense in its 35-point trophy-game win over Hempfield. And on D, Kelley registered five tackles and a sack off the edge as the Streaks held the Knights to 73 rushing yards.

BACK OF THE WEEK: Zach Fisher, WR-DB, Conestoga Valley — In the Buckskins’ riveting 41-35 win at Manheim Central, Fisher had an outstanding all-purpose night. He caught six passes for 207 yards — 34.5 yards per grab — with a pair of TD receptions, and he also tossed a 17-yard TD pass of his own on a trick play. On defense, Fisher was in on four total tackles as CV beat Central for the first time since 2006.

Simeon Teklu, OT-DT, Conestoga Valley — In the Bucks’ triumph over the Barons, Teklu was a force along the line of scrimmage. He earned a high blocking grade on offense, helping CV churn out 431 yards. And on defense, Teklu had five tackles — including a trio of solo sticks — and a QB hurry as the Bucks improved to 2-2.

BACK OF THE WEEK: Beau Heyser, TE-DE, Lampeter-Strasburg — The Pioneers remained undefeated with a 40-7 win over Garden Spot, and Heyser had his fingerprints all over L-S’s victory. On offense, he caught three passes for 85 yards with a pair of TD snags — from 26 and 18 yards, respectively — and on D, Heyser piled up 10 tackles, including seven solo stops, as the Pioneers clinched a tie for the section title and improved to 5-0.

LINEMAN OF THE WEEK: Parker Owens, DE, Lampeter-Strasburg — The Pioneers’ defense continued to sizzle in their win over Garden Spot, and Owens was right in the middle of it with eight tackles, plus three stops for losses, a pair of sacks and a fumble recovery for undefeated L-S.

CO-BACK OF THE WEEK: Mike Trainor, RB-DB, Octorara — In the Braves’ 49-27 victory over rival Pequea Valley to capture the “Battle of the Braves” Bowl, Trainor ran wild. He took the rock 24 times for 213 yards with a pair of TD runs — covering 2 yards and 36 yards, respectively — and he hauled in a 23-yard TD catch. Trainor also added three tackles from his safety spot on defense as Octorara improved to 4-1.

CO-BACK OF THE WEEK: Weston Stoltzfus, QB-DB, Octorara — The Braves’ rookie signal-caller had his best game to date against Pequea Valley, clicking on 10 of 11 passes for 196 yards with three TD strikes, helping the Braves gouge out 615 total yards. Stoltzfus chipped in with 35 rushing yards on five keepers, and he had two tackles and an interception on defense for the Braves, who own the league’s top-ranked offense heading into Week 6.

LINEMAN OF THE WEEK: No nominations.

The Latest: US adviser hopes for vaccine approval soon

Here are five individual matchups to watch when Lancaster-Lebanon League football teams hit the field for their Week 6 games ...

For 16 of the L-L League’s 24 football teams, this weekend’s games will signal the end of their head-to-head section battles.

Nate Fisher showed up at Pequea Valley’s second spring football practice two years ago, grabbed a helmet out of the pile and trotted out to th…