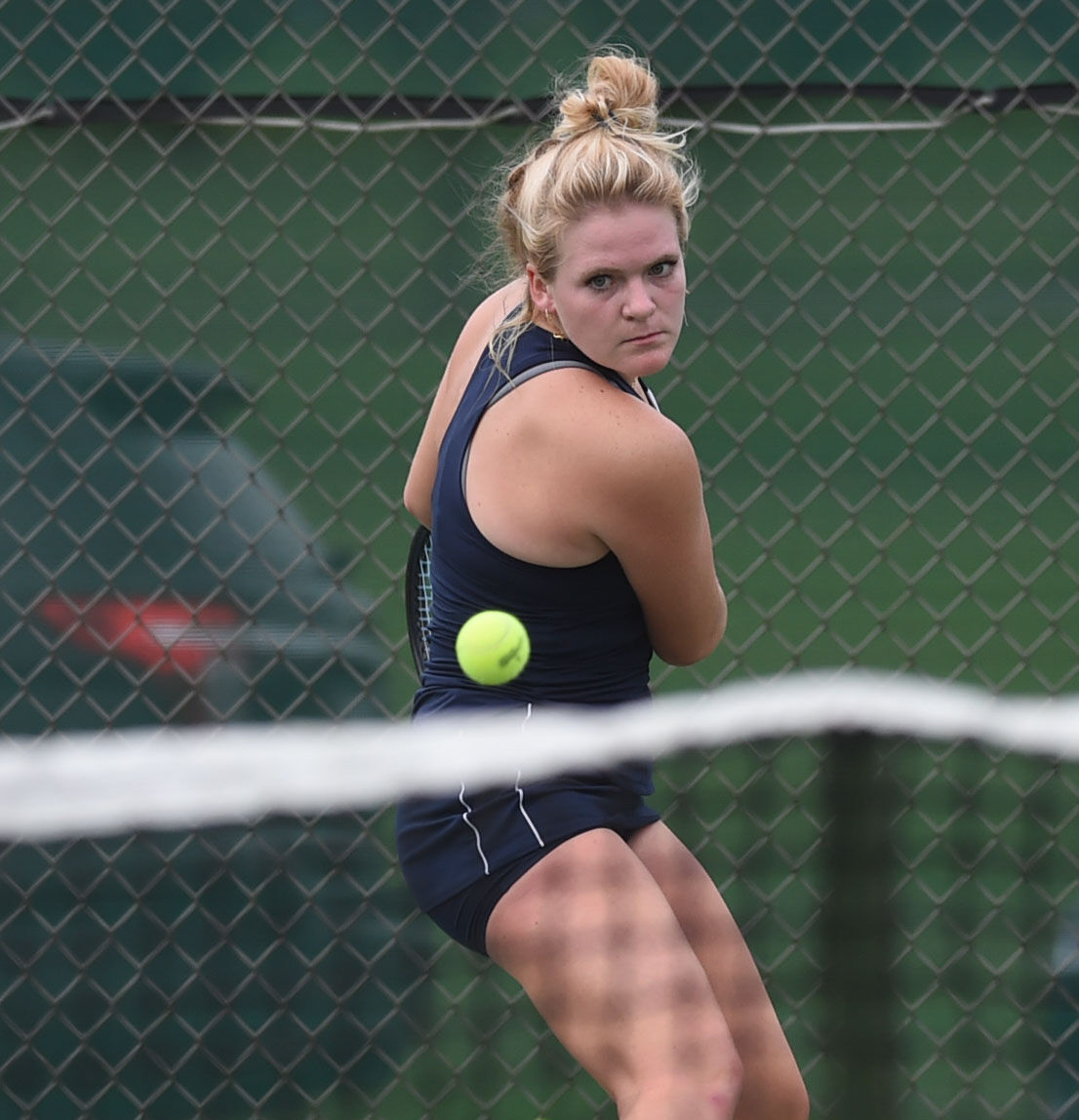 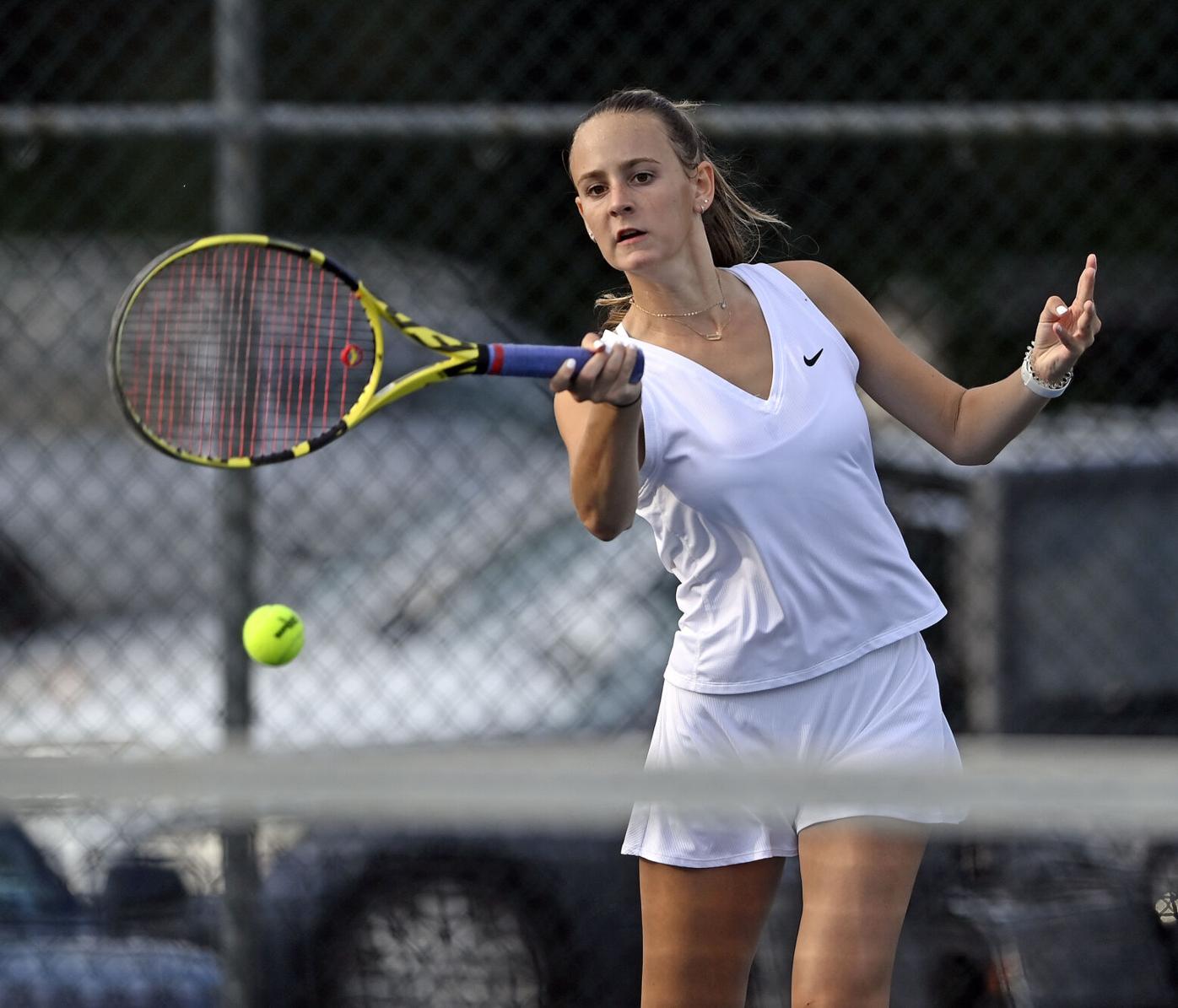 HERSHEY — It initially looked like it was going to be easy. But there ended up being plenty of tension for Penn Manor’s Catherine Rabatin in her District Three Class 3A Girls Tennis Singles title match.

The top-seeded Rabatin defeated her rival from Manheim Township, No. 2 seed Avery Palandjian, 6-0, 2-6, 6-3 in the final Saturday at Hershey Racquet Club.

“At the break between the second and third set, she just seemed a bit overwhelmed,” Penn Manor coach Amanda Pryzbylkowski said. “Anytime they play each other there’s so many tensions, between the fans, between themselves, between everybody.

“So it is like it comes down to mental toughness.”

Rabatin has battled Palandjian plenty of times, including three matches this season. Palandjian won their regular-season meeting before Rabatin beat her in the Lancaster-Lebanon League Tournament Class 3A final.

“I guess you could say it’s a rivalry,” Rabatin said of her matches with Palandjian. “It’s definitely great competition.”

The battle-tested Rabatin, a junior who won her third straight district 3A crown, noted the momentum swing as Palandjian evened the match.

The Class 3A title match featured two of the five L-L players in Saturday’s action, all of whom qualified for the PIAA Tournament.

Lancaster Catholic junior and No. 1 seed Anna Millen defended her Class 2A crown with a surprisingly easy 6-1, 6-0 over freshman Mia Gassert of Hamburg, the No. 3 seed, after a painstakingly slow 6-3, 6-2 victory in the semifinals. Millen’s semifinal finished after Palandjian got by third-seeded Anya Rosenbach of New Oxford 6-0, 5-7, 6-4.

“The stress is gone now, for sure,” Millen said of being the No. 1 seed, after winning last year as the No. 4 and final seed in a field shortened by COVID-19 pandemic protocols. “I’m glad I got through it. … I just kind of figured out both the girls’ games today and figured out how I could beat them.”

“I thought she was a little hesitant on her strokes,” Lancaster Catholic coach Victor Fissella said, “but that will come with a little bit more time and maturity. … I don’t know if that was due to being nervous or just playing not to lose. But overall, I liked the way she held her composure, she maintained focus and discipline which I think was a big key to getting her through those tough opponents.”

Manheim Township’s Kayla Kurtz, who was not seeded, advanced to the state 3A tournament after Rosenbach retired with a knee injury with Kurtz leading 3-0 in the third-place match. In 2A, second-seeded Madeleine Gerz of Lancaster Mennonite got a taste of what Millen went through when her third-place match lasted about four hours, finally defeating Alisa Steele of West York 7-6 (5), 6-2.

The state singles tournament is scheduled for Nov. 5-6 at Hershey Racquet Club. Next up in girls tennis is the district team quarterfinals Monday (Class 2A) and Tuesday (3A).