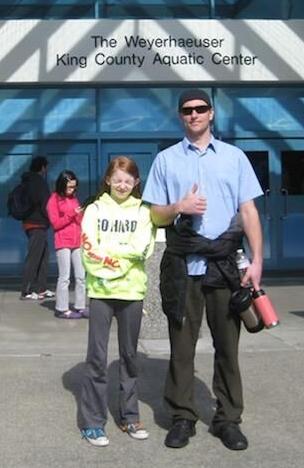 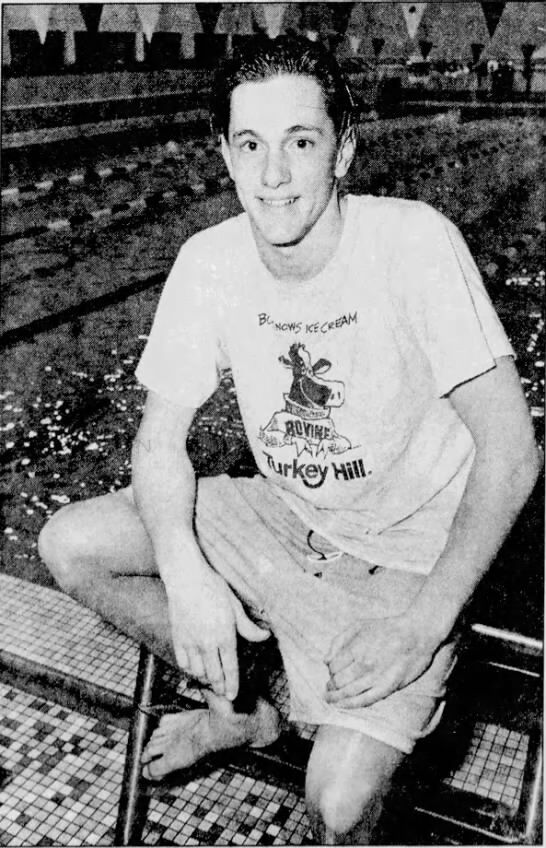 In this file photo from 1993, Matt Hershock was a senior swimmer for Penn Manor High School, specializing in the breaststroke.

Penn Manor alum Matt Hershock moved to Seward, Alaska, in 1999. Six years later, he heard about the Seward Tsunami Swim Club. Launched in the 1970s, the club was struggling by 2005 to the point of nearly going defunct. Hershock applied to be its new head coach.

“I was the only one who interviewed for the job,” Hershock recalled.

He was tasked with rebuilding the program.

Jacoby, now 17, won an Olympic gold medal for the United States in the 100-meter women’s breaststroke on Monday. She’ll forever hold the distinction as the first swimmer from Alaska to compete in the Olympics, let alone win a gold medal.

Hershock himself began swimming at age 6, going on to swim competitively for the Lancaster YMCA, Four Seasons and Lancaster Aquatic Club. His father was part of a group of parents that helped to start the first swim team at Penn Manor in 1988, with Hershock joining the next year when he was a high school freshman.

After graduating from Penn Manor in 1993, Hershock went on to become an eight-time Pennsylvania State Athletic Conference champion and three-time NCAA Division II All-American at Clarion University from 1995 to 1998.

“After college I ended up moving to Maine,” Hershock said. “I fell in love with boats.”

While in Maine, he saw a flier advertising for work on ships in Alaska. He moved there a year later.

“You have to get used to darkness in winter time,” Hershock said of living in Alaska. “Dark and cold seem to never end.”

Seward, population 2,773, was originally founded in 1905. Hershock now owns one of the first houses built in the town. The structure is more commonly known as the Old Seward House, which now goes by the Sea Bean Cafe and Sauerdough Lodging. Hershock runs the business. Rooms there rent anywhere from $175 to $375 a night.

Hershock and his wife, Meredith, purchased the property in 2005, the same year Hershock relaunched the Seward Tsunami Swim Club. The club has one 25-meter indoor pool, in a state that has just one 50-meter pool.

“For seven years in a row we became the No. 1 fundraising club in the country for a club our size,” Hershock said. “And in every one of these meetings we kept saying we’re going to do this because one day we’ll have an Olympian.”

That Olympian ended up being Jacoby.

“I started coaching her, but it’s not just me,” Hershock said. “This has been a team of coaches that have been working on this.”

‘We did this together’

In a recent story about Jacoby on SI.com, writer Pat Forde wrote this with regard to the breaststroke: “The most eccentric of the four swimming disciplines, both in terms of mechanics and mindset, prodigies can pop up from the strangest places at the most unexpected times. ... Olympic women’s breaststroke — especially the sprint version — is nothing if not routinely unpredictable.”

Hershock agrees with that notion. And it might help explain why Jacoby came seemingly from out of nowhere to win an Olympic gold medal. In 2019, she clocked a lifetime best of 1 minute, 8.12 seconds in the 100-meter breaststroke. She didn’t break 1:07 until the Olympic semifinals. She swam a personal-best 1:04.95 to win Olympic gold.

Shedding that much time in such a short span is unheard of.

D’Amico is a Seward Tsunami Swim Club coach who was brought on board by Hershock in 2014. While he doesn’t have a swimming background, D’Amico specializes in sports physiology, mental toughness and strength training.

“Lydia’s strength is her kick,” Hershock said. “So (D’Amico) made her kick and her legs just dominant. ... He got her to the point where she’s the best kicker in the world. Once he got that set, in the last 18 months he just started pumping the arms — strength-training arms — while maintaining what she has in the legs. When it came down to taper time, that’s when her times started dropping.”

Shortly after Jacoby won Olympic gold, a tweet from the Twitter account of USA Swimming showed video of a celebration of hundreds back in Seward at a community watch party. The tweet got 2.2 million views.

“If you look closely, zoom into the balcony,” Hershock said. “You can see two grown men jumping up and down like idiots.”

Hershock is one of them.

“We did this together,” Hershock said. “That’s what we’re teaching. We don’t have a 50-meter pool. But our opinion is if we have a pool, we have a shot.”

Many 13-year-olds are likely spending this summer without an alarm clock, waking up whenever…

Hempfield grad Becca Hayes has been competing in triathlons since 2009. She’s a veteran in t…

As a child, Jolie Abadir’s parents often found their daughter by looking up.

Rock climbing since he was a child, Cam Horst later went through his teenage years building …

A few weeks ago, I wrote a story looking back on Penn Manor High School’s old West Gymnasium…

The Jacome family is making the most of its move from Colombia to the United States in 2001. A passion for swimming has driven teenager Miguel's success.

The long, brunette hair Eva Salembier had been known for was long gone by the time she arriv…

The farther south you go in the United States, the more popular rodeo becomes. Like the foot…