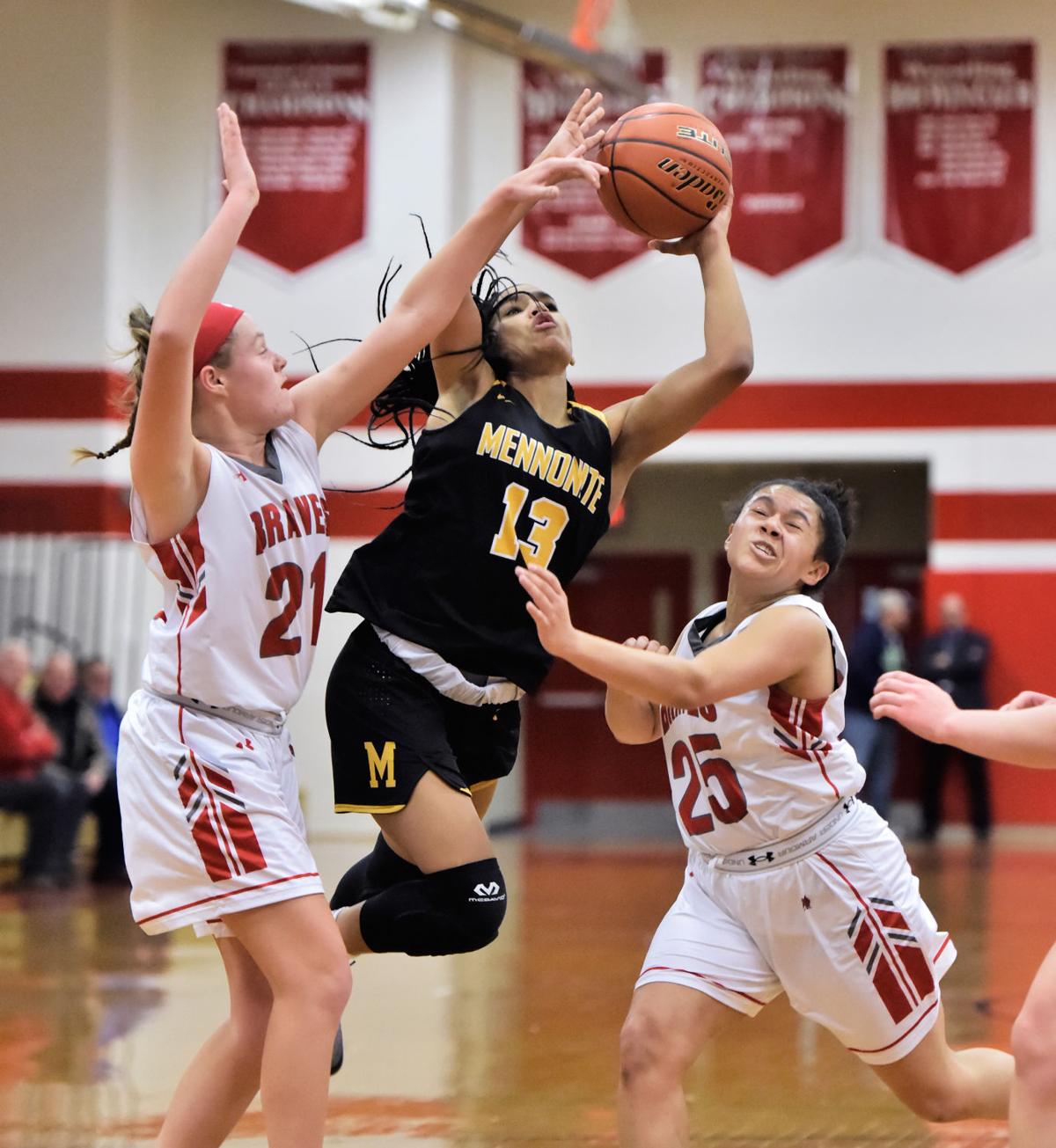 Pequea Valley's Kyrstin Jarvis (21) was called for a foul on this play as she and her teammate Marlena Ferry (25) work on defense against Lancaster Mennonite's Mariah Wilson (13) on Wednesday, December 19, 2018. 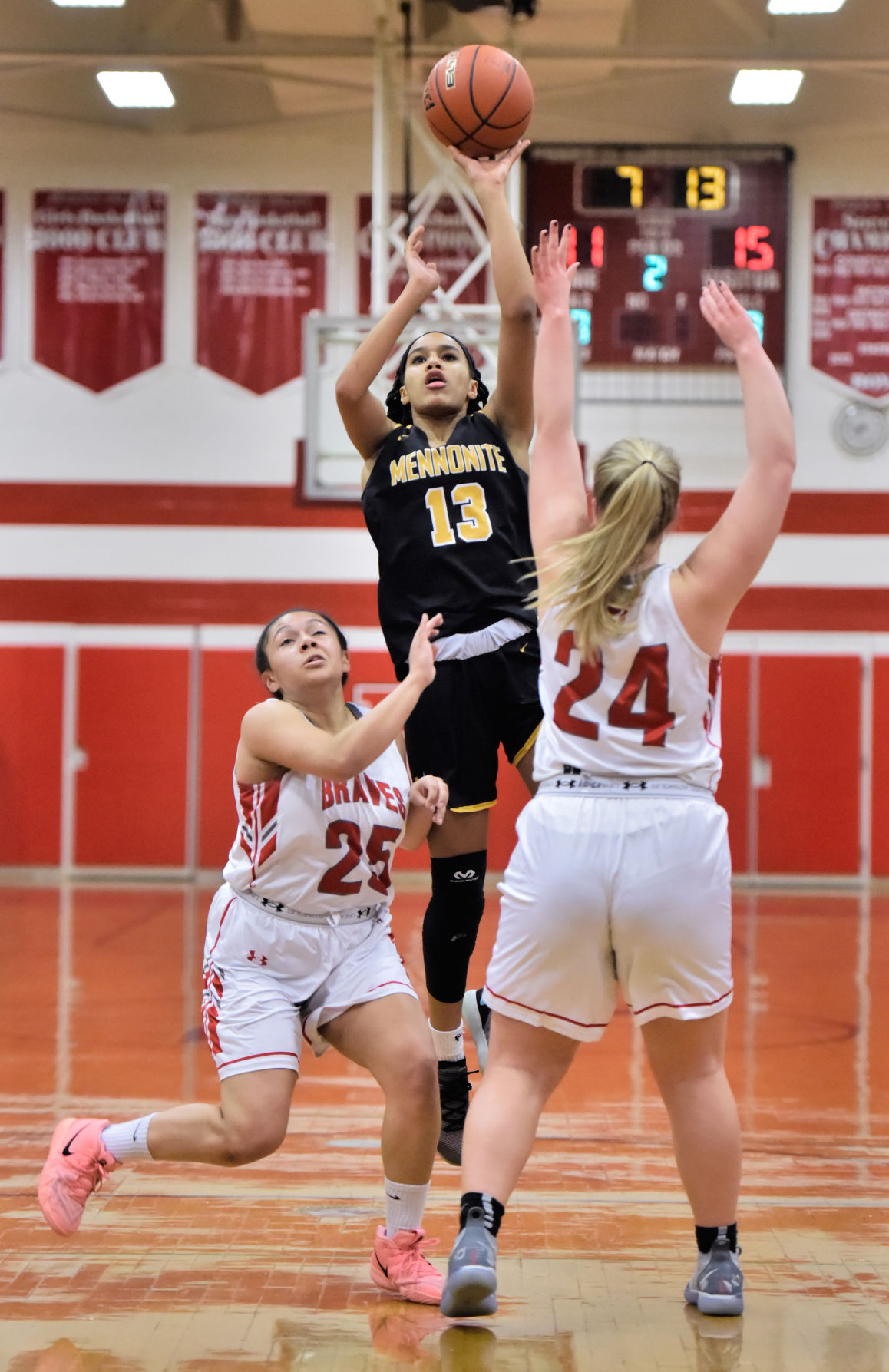 Pequea Valley's Kyrstin Jarvis (21) was called for a foul on this play as she and her teammate Marlena Ferry (25) work on defense against Lancaster Mennonite's Mariah Wilson (13) on Wednesday, December 19, 2018.

Nisa Wilson is one of the leading scorers in the history of McCaskey’s girls’ basketball program.

The 1996 grad capped her Red Tornado career with 1,225 points, before going on to play in college for Bowie State University. During her prep days at McCaskey, Wilson was a shooter, a slasher and a dribble-driver, who played at one speed: Fast.

Say hello to Mariah Wilson, who is taking the Lancaster-Lebanon League by storm.

Lancaster Mennonite’s dynamic sophomore combo guard cracked the Blazers’ starting lineup as a freshman last winter. This season, she’s off to a sizzling start, popping in 17 points a game for Mennonite, which will come out of the holiday break alone in first place in the Section Five race with an 8-3 overall record.

Wilson can run the point, pick-and-pop off screens, penetrate and dish, score off the bounce, and defend. She’s the whole package. And she’s keeping it in the family.

“I always knew I was going to play basketball, because I knew my mom played,” Wilson said. “The first time I picked up a basketball I was probably three or four. I started playing in second grade. And then eighth grade was when I really got hooked. That’s when basketball became my passion. I knew then that I wanted to go for it. I kind of wanted to carry it on for my mom, and keep the tradition going.”

She’s certainly excelling in that department.

“It’s in her bloodlines, that’s for sure,” first-year Lancaster Mennonite coach Trevor Orr said. “She’s a gym rat and a tireless worker.”

“For basketball, my mom is the person I look to the most,” Wilson said. “After games we talk about things I need to work on. During AAU we watch film so I know what I need to do for the next game. Things like that. And we shoot around a lot. She takes me everywhere. Every weekend my friends ask me to do something but I’m like, sorry, I have basketball. It’s my passion.”

Wilson, a wiry lefty, is already doing things most 10th-grade players don’t do: She plays for a high-profile AAU team — the Philly Belles, who have produced countless Division I players over the years — and this past summer, Wilson attended a point-guard camp in New Jersey, where she spent the weekend getting classroom and on-court tutorials along with other top boys and girls players from around the region.

She’s pouring her life into basketball.

“It’s just what I want,” Wilson said. “It’s a passion I have. I live for this. This is what I want to do when I get older. Even after college, I’d love to go and play overseas. I want to get better and get there.”

She’s certainly determined. And Wilson has another family member to lean on when it comes to hoops knowledge: Her cousin is Lancaster Catholic senior standout Kiki Jefferson.

“She’s a great person to talk to,” Wilson said. “We’re always talking about basketball, and she always encourages me. Anything I need to know about basketball, I can go to Kiki, because right now she’s living what I want. She’s going through this process two years ahead of me.”

Jefferson recently joined the 2,000-point club, and earlier this fall she committed to James Madison University. Jefferson and Wilson also play for the same AAU organization, where Wilson recently wrapped up her first year.

“Philly Belles was a good experience,” Wilson said. “It’s an opportunity to get out there, and I thought it was something I needed to do to improve my game. I see better players and more aggression. It’s different. But it’s something I needed.”

Wilson’s hard work is starting to pay dividends. She’s already starting to hear from Division I programs, like Penn State, Lehigh and Temple. And the way she’s going, Wilson should start piling up scholarship offers in the very near future.

“I have a desire for this,” Wilson said. “I think I push myself harder than I even need to sometimes. But that’s me. In my brain, I’m always thinking ahead and thinking about how I can get better.”

The post-holiday portion of the L-L League girls’ basketball 2018-19 season is officially underway. Four teams returned to the court on Thursd…

It was the first Friday back after the holiday break, and it certainly was a busy one, with head-to-head section games aplenty, and plenty of …

Short — but power-packed — week in L-L League girls’ basketball action, with teams kicking off the rust and returning to the court Thursday/Fr…

A big night in L-L League girls’ basketball circles on Tuesday, with plenty of head-to-head section matchups, some facelifts in the standings …

Seven games on Thursday’s L-L League girls’ basketball schedule; there were originally eight contests on the docket, but the Lancaster Country…

Putting a bow on the recently completed Lancaster-Lebanon League girls basketball season, with a look back at some of this winter’s top highli…

On first day of practice, an L-L League girls basketball notebook to get season started

Don’t look now, but another Lancaster-Lebanon League girls basketball season is right up around the bend, with opening-night nonleague games a…

With another season of L-L League girls’ basketball set to tip-off on Friday, here are five things to watch in the coming months, as the campa…

And away we go with L-L League girls’ basketball for the 2019-20 season, as the long and winding journey to the PIAA finals in the Giant Cente…

For the third time already this season, the doors to the L-L League girls' basketball 1,000-point club have swung open.

Up next on the girls’ basketball docket: The District 3 playoffs, which commence Monday night in a gym near you. Lancaster County and Lebanon …

The final day of the PIAA girls’ basketball state championships was supposed to be Saturday at the Giant Center in Hershey. It would have wrap…

Most high school junior basketball players won’t make a verbal commitment to the college of their choice until the end of the summer, just bef…