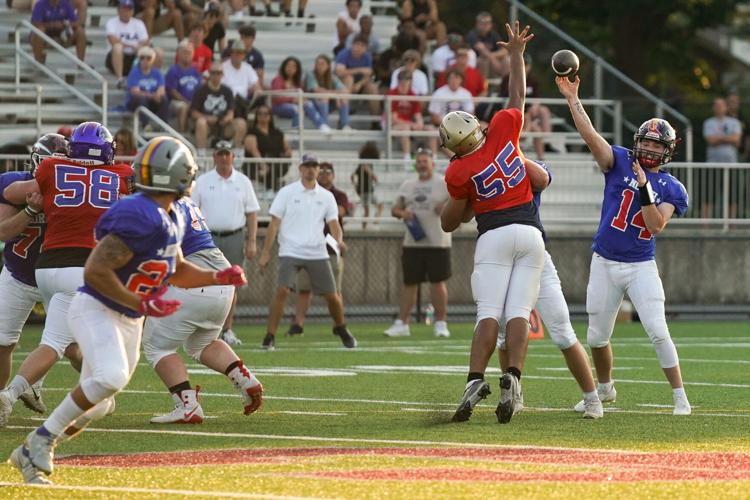 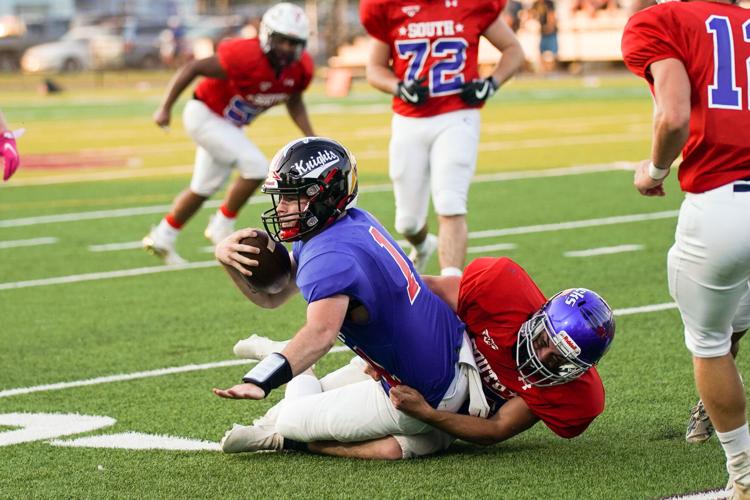 Hempfield QB Cam Harbaugh is brought down by Garden Spot's Joel Martin during the Tri-County All-Star Football Game at Manheim Central's Rettew Stadium on Tuesday, May 31, 2022.

Hempfield QB Cam Harbaugh is brought down by Garden Spot's Joel Martin during the Tri-County All-Star Football Game at Manheim Central's Rettew Stadium on Tuesday, May 31, 2022.

Helter-skelter in an early-summer swelter, a proverbial slice of Don McLean’s “American Pie” played out on Elden Rettew Field in Manheim on Tuesday night.

The 2022 Tri-County All-Star football game featured players from all across the greater Lancaster-Lebanon League area, all joining together for one final memory under the so-called Friday Night Lights.

As for the game, quarterback Cam Harbaugh did a little bit of everything to lead the North All-Stars to a 27-17 victory over the South All-Stars.

Harbaugh, of Hempfield, passed for over 100 yards, rushed for two touchdowns and even caught a pass en route to earning North MVP honors.

Brad Hoffman of Wilson earned South MVP honors, throwing for 153 yards and adding another 46 yards on the ground as the South tried to rally from a 7-3 halftime deficit.

The North defense forced a three-and-out to open the contest and a partially-blocked punt gave Harbaugh and company a short field to work with.

Harbaugh’s first pass was a 38-yard strike hauled in by Hempfield teammate Adam Acker at the 6-yard line. Harbaugh did the rest on a 6-yard touchdown run up the middle and the North led 7-0.

After an exchange of punts, Manheim Central’s Larry Marley intercepted Hoffman, but the North’s subsequent drive stalled at midfield.

Robert Footman (Columbia) relieved Hoffman under center at the start of the second quarter and sparked the South’s first scoring drive, finding Isaac Burks (McCaskey) over the middle for a 34-yard catch and run.

The North defense held, however, and Walker Martin of Garden Spot drilled a 32-yard field goal to get the South on the board.

The South opened the second half with an onside kick and promptly went to work, taking an ephemeral lead on a 34-yard touchdown run by Anthony Bourassa (Cocalico). Bourassa led all rushers with 52 yards on just five carries.

Trailing for the first time in the game, the North responded, opening the subsequent drive on a trick-play, reverse-option pass from Elizabethtown’s Patrick Gilhool to Harbaugh for 33 yards.

From there, Aadyn Richards of Cedar Crest ran for 24 yards, Tony Cruz of Lancaster Catholic ran for 12 yards and Harbaugh capped the drive with a 2-yard keeper around the right side to retake the lead 14-10.

The North expanded its lead midway through the fourth quarter on a 1-yard touchdown run by Richards.

Hoffman answered for the South, hitting Derrick Lambert (Garden Spot) on a 10-yard fade on fourth down to cut the deficit to just 20-17 with 2:15 left to play.

But faced with a fourth down at midfield, Harbaugh found Cruz for 31 yards, and Richie Kowalski (Palmyra) ran in from the 2-yard line to ice the contest and cap the scoring for the North.

Are you ready for some — gulp — football?

Football season has been over for more than six months, but the postseason accolades continu…