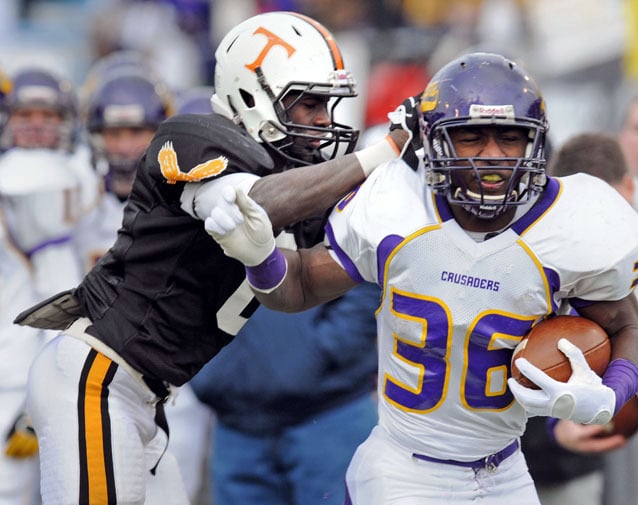 Lancaster Catholic's Roman Clay is forced out of bounds by Tyrone's Charles Wilson during the 3rd quarter of the PIAA Class AA Championship game Saturday in Hershey. (Jeff Ruppenthal / Staff) 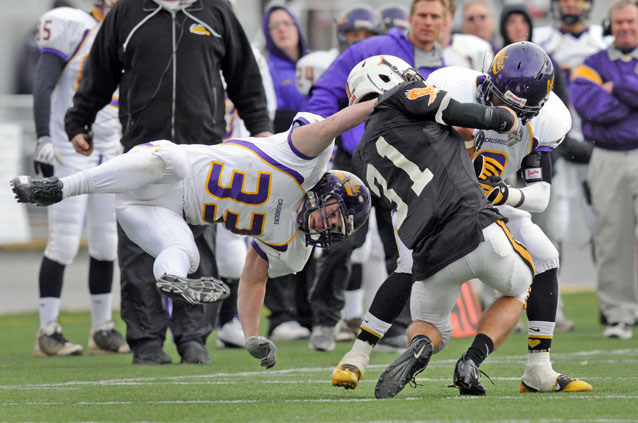 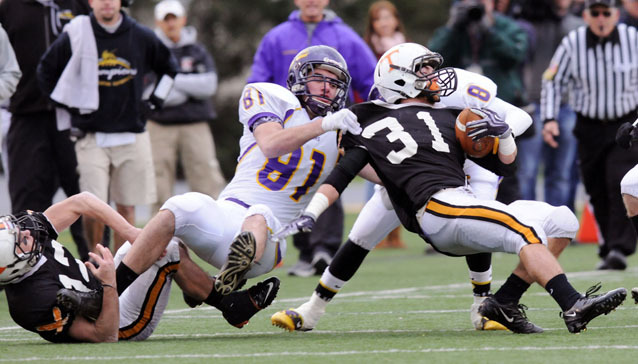 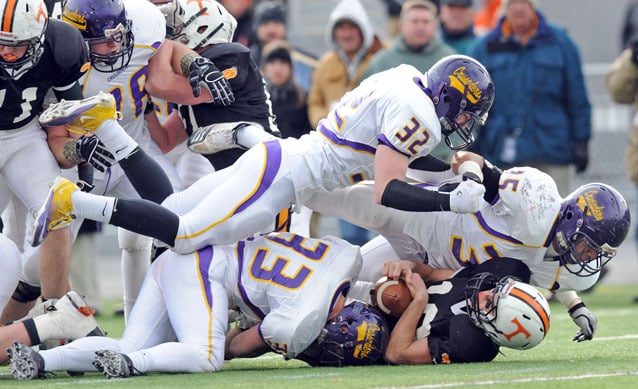 Lancaster Catholic's Roman Clay is forced out of bounds by Tyrone's Charles Wilson during the 3rd quarter of the PIAA Class AA Championship game Saturday in Hershey. (Jeff Ruppenthal / Staff)

From the first day of heat acclimatization practice on Aug. 9, until the very last Lancaster-Lebanon League football team is still standing later this fall, we’ll bring you three fun L-L League pigskin facts on a daily basis to keep you updated about what’s happening around the league …

1. Happy Anniversary, Lancaster Catholic. It’s been 10 years since the Crusaders pocketed their second PIAA-2A state championship over a dominating 3-year clip. In 2011, Catholic went 16-0 and won L-L League Section 3, District 3 and PIAA crowns with an amazing ride under coach Bruce Harbach. Some fun facts from that championship season: The Crusaders nearly got off to a 0-1 start, but rallied past Trinity 36-29 in OT in Week 1. Mac McCafferty started the season at QB, but when an early season injury put him on the shelf, Andrew Dzurik stepped in and piloted Catholic the rest of the way. He made his debut in a Week 2 win over Hempfield, going 12-for-15 for 180 yards with two TD passes against the Black Knights, and the Crusaders were off and running. … Catholic’s offense was prolific; the Crusaders scored 50 or more points in a game seven times in 2011: 56 vs. McCaskey; 56 vs. Pequea Valley; 70 vs. Columbia; 54 vs. Annville-Cleona; 51 vs. Elco; 61 vs. Boiling Springs in the D3 playoffs; and 60 against Trinity in a rematch in the D3 playoffs. … Catholic squeezed out a 21-14 victory over Wyomissing for district gold, before beating Mount Carmel (21-0), Philadelphia West Catholic (23-20) and Tyrone (17-7) in the state playoffs. … In the state-title clincher vs. Tyrone, eventual L-L League all-time leading rusher Roman Clay rushed for 154 yards and a TD. … Some stat leaders from that magical season: Dzurik (110-of-174 for 1,994 yards, 21 TD passes) wasn’t flashy, but he was certainly steady behind center. … Two backs rushed for 1,000-plus yards: Clay (1,899 yards, 31 TD) and high-stepper Brandon Hollister (1,547 yards, 25 TD). … The top pass-catchers were Charles Sweigert (45-914, 5 TD) and Sean Titus (37-841, 14 TD). … Hard to believe it’s been 10 years, but that Crusaders’ team supplied a lot of memories for the program and the league.

2. The last time Octorara was on the field, the Braves picked up a must-have 32-17 win at Elco back in Week 7. Octorara’s Week 8 tilt vs. Pequea Valley was called off because of coronavirus issues, and PV ended up forfeiting the victory to Octorara. Anyway … in that Elco game, Octorara QB Weston Stoltzfus went 12-for-15 for 217 yards with four TD strikes — all to Corey DiAntonio, who had seven catches in all, for 158 air yards. Annville-Cleona comes to Atglen on Friday, and the Dutchmen’s D needs to get some pressure on Stoltzfus, and definitely keep an eye on DiAntonio up top. A-C DB Phoenix Music (43 tackles, 3 QB hurries, 2 INT, 4 pass breakups, 1 forced fumble) will have to help mark DiAntonio. A fun A-C stat: The Dutchmen have 22 pass breakups, so Music and his secondary mates have jumped plenty of routes and clogged some passing windows. They’ll need more off that against Octorara to try and cool off the Stoltzfus-to-DiAntonio connection.

3. Elizabethtown has to keep Manheim Central’s multi-purpose offensive attack under wraps on Friday, when the Bears head over to Elden Rettew Field for an old-school Section 2 rivalry showdown. The Barons have been solid up top — QB Judd Novak has passed for 1,385 yards with 19 TD tosses — and they’ve hammered out 1,421 rushing yards for 359 yards a night. Reading and reacting will be the name of the game for E-town, so keep an eye on a pair of wily Bears’ ball-hawkers in this clash: Elijah Macfarlane (44 tackles, 1 INT, 3 pass breakups, 2 forced fumbles) and Hayden Haver (58 tackles, 2 for losses, 3 sacks, 3 pass breakups, 3 fumble recovers) must be in swarm-mode from the jump.

Check out the L-L League football forecast for Week 9

L-L League Football kicks off Week 9 tonight with 11 games to be played tonight.