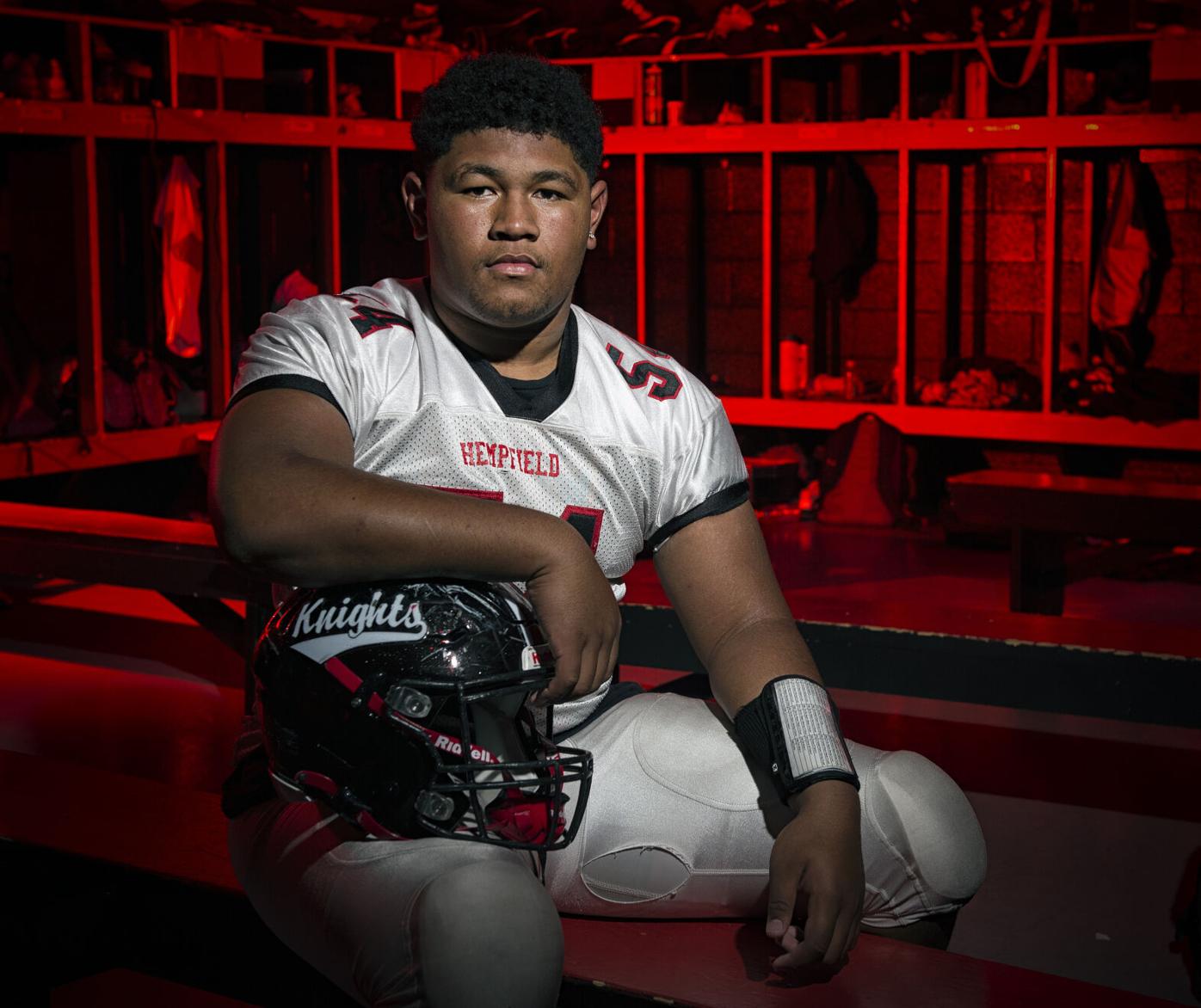 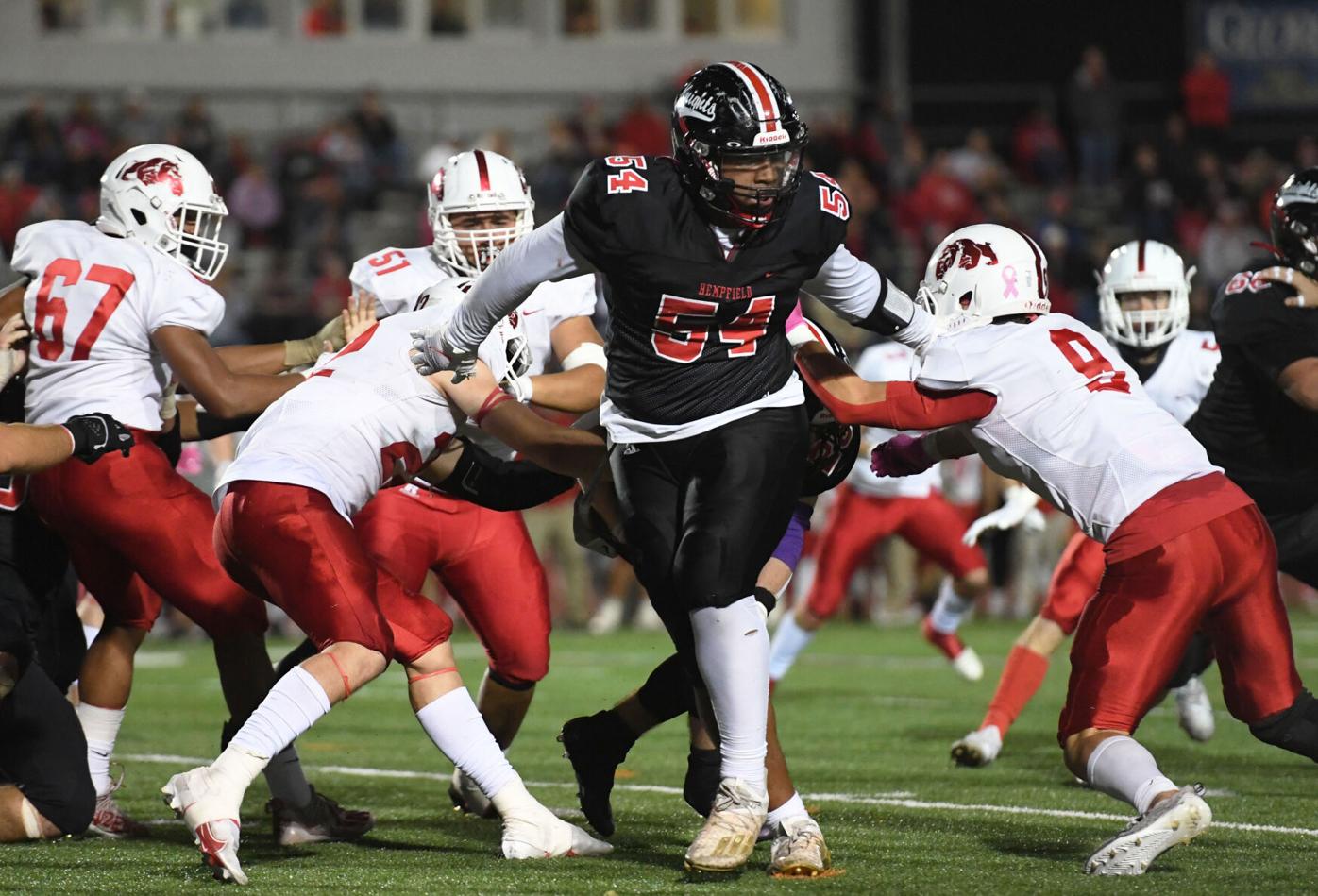 Hempfield’s Deyvid Palepale clears the path for Evan Smith in the first half during an L-L League Section 1 football game against Wilson at Hempfield High School in Landisville on Friday, Oct. 22, 2021.

Hempfield’s Deyvid Palepale clears the path for Evan Smith in the first half during an L-L League Section 1 football game against Wilson at Hempfield High School in Landisville on Friday, Oct. 22, 2021.

It’s a long way from Anchorage, Alaska to Landisville — 4,256 miles and about 70 hours by car, to be exact.

Deyvid Palepale has made that long and winding journey, and he’s fitting in quite well with Hempfield’s football team. The Black Knights’ bruising sophomore two-way talent has earned starting spots at left tackle and defensive end, and after getting acclimated to his new surroundings — in Pennsylvania and around the Lancaster-Lebanon League — he’s been a force to be reckoned with at both spots this fall.

“The sky is the limit for him,” Hempfield coach George Eager said. “He plays physical, and he doesn’t play like a sophomore. That’s how we’ve needed him to play this season, and he’s certainly done that.”

Palepale’s backstory is an interesting one. He’s Samoan, and he’s ultra-proud of his heritage; Palepale is already counting down the days until he gets his first traditional Samoan tattoo. His family hails from the islands of Samoa and Tonga with some Hawaiian roots as well, and he was born to parents Tumua Lauano and Sayonara Palepale in Anchorage.

Palepale started playing football there when he was six, and he played through middle school, aged 14, before the family — including little brothers Dehvyn and Dezmon — uprooted and left Anchorage for the greener, rolling pastures of Lancaster County.

“In Alaska, we had shorter summers and really long winters, that’s for sure,” Palepale said. “But it was really hard moving because Anchorage was all I knew. So, moving here was a big change.”

He’s certainly made the best of it. And quickly. Palepale played for Hempfield’s freshman team last year, and immediately after the season, he became a weight room junkie, getting his body ready for the rigors of varsity football. When the Knights broke camp this August, Palepale earned a starting spot at D-end and right tackle. In Week Three, he slid over to the all-important left tackle spot — blocking for Hempfield dual-threat all-star QB Cam Harbaugh — and he’s excelled.

Twice this season Palepale has earned L-L League Quarterback Club Lineman of the Week honors, so coaches around the area are taking notice of his skills.

“He can withstand a bull-rush because of his strength,” Eager said, “and he can also kick-back and take care of an edge rusher who is trying to beat him with speed. He’s versatile.”

“The first couple of weeks this season I was kind of holding myself back,” Palepale said. “I was kind of afraid; I’m not sure what I was afraid of, but I was. I think I knew that I wasn’t playing up to my potential, but then I got more and more comfortable as the season went on. Now, I’m playing with a lot of confidence.”

Palepale certainly has plenty of motivation. His cousin, Penei Sewell, plays O-tackle in the NFL for the Detroit Lions, after playing major Division I college ball for the University of Oregon.

“I have a ton of cousins,” Palepale said. “If you ask any Samoan, they’d probably tell you that they have like 37 cousins. The family reunions are always fun, to say the least.”

Palepale met Sewell one time back in Anchorage a few years ago, and the Lions’ trench protector quickly became one of his heroes. Palepale and his family flip through the TV channels every week to see if Detroit’s game is being broadcast locally.

“He’s doing something all football players want to do,” Palepale said, “so he’s played a big role.”

He’s a big dude — Palepale is a chiseled 6-foot-3 and 275 pounds — and he also has a softer side; Palepale plays the piano, and when he was younger, he’d participate in traditional Samoan dances.

But when the lights pop on and the football is kicked off on a Friday night, he’s all business.

“Here, everybody can hit,” Palepale said. “In Alaska, you’d go up against teams with one or two players who would really hit you. All 11 players here, you have to watch out for.”

So far, so very good for Palepale, who has more than held his own in the trenches for Hempfield, which needs a victory at rival Penn Manor on Friday, plus some help, to make the District Three Class 6A playoffs.

Palepale’s former high school in Alaska, Bettye Davis East Anchorage, won the Alaska School Activities Association state championship last week with a 30-17 win over Juneau-Douglas/Thunder Mountain. He stays in touch with some of the guys on that title team.

After that 4,256-mile journey and getting used to his new life in Landisville, now Palepale will try and help his new team make the playoffs here.

“He’s a big kid, an athletic kid and just a great kid,” Eager said. “He’s surpassing expectations. But did I think he was capable? Certainly. He’s somebody we can build upon in our program.”

The L-L League Quarterback Club has tabbed their top performers from the Week 9 games. Here are their honorees …

And just like that — snap! — the finish-line Week 10 games have arrived. And there’s a lot going on, so pay attention.

The Black Knights did what they had to do, but may not have received the help they needed elsewhere in their pursuit of a playoff berth.

We are into the second week of the playoffs on the L-L Football Roundtable, sponsored by Thaddeus Stevens College of Technology.

Harrisburg powers past Hempfield, knocks out Black Knights in District 3 Class 6A semifinals