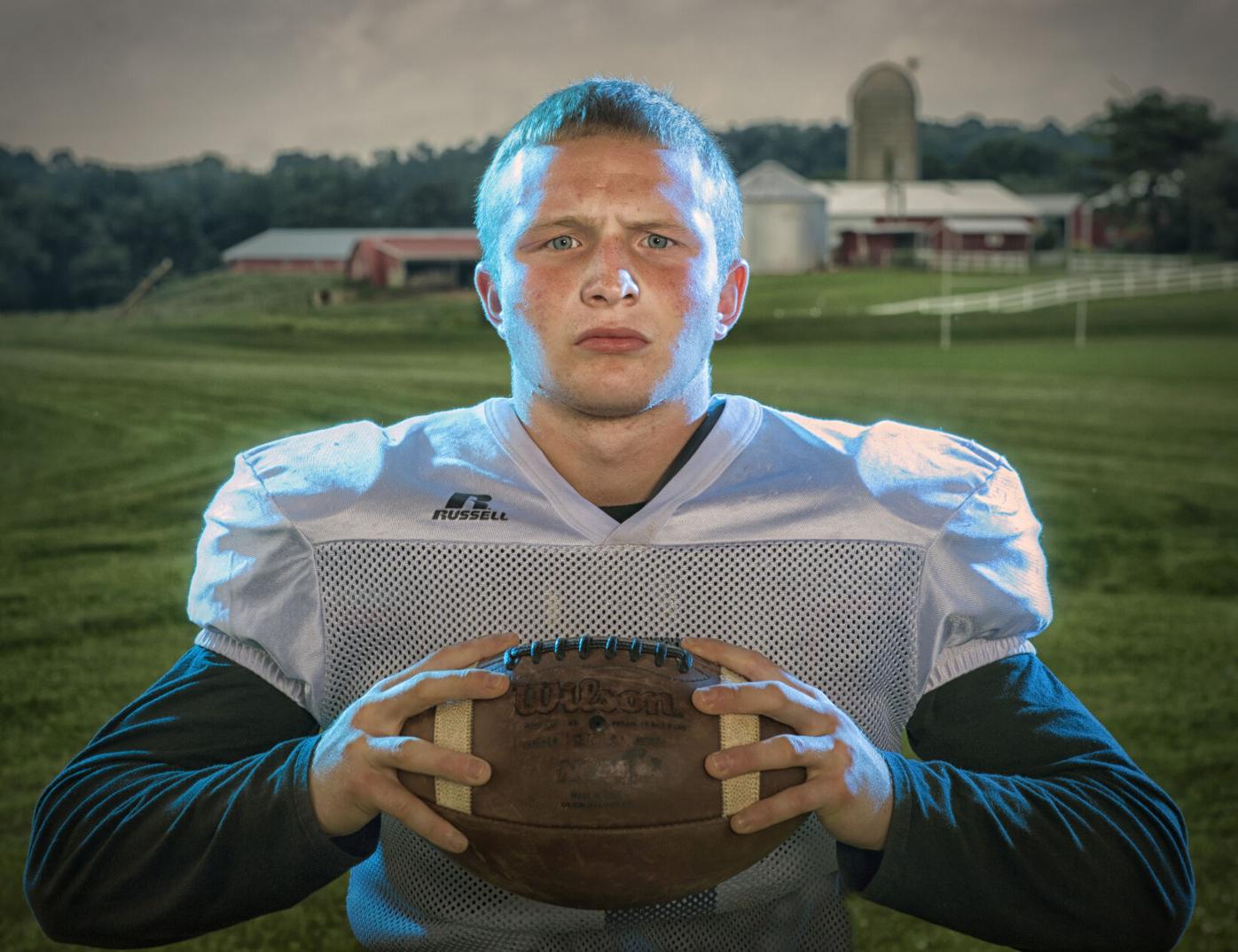 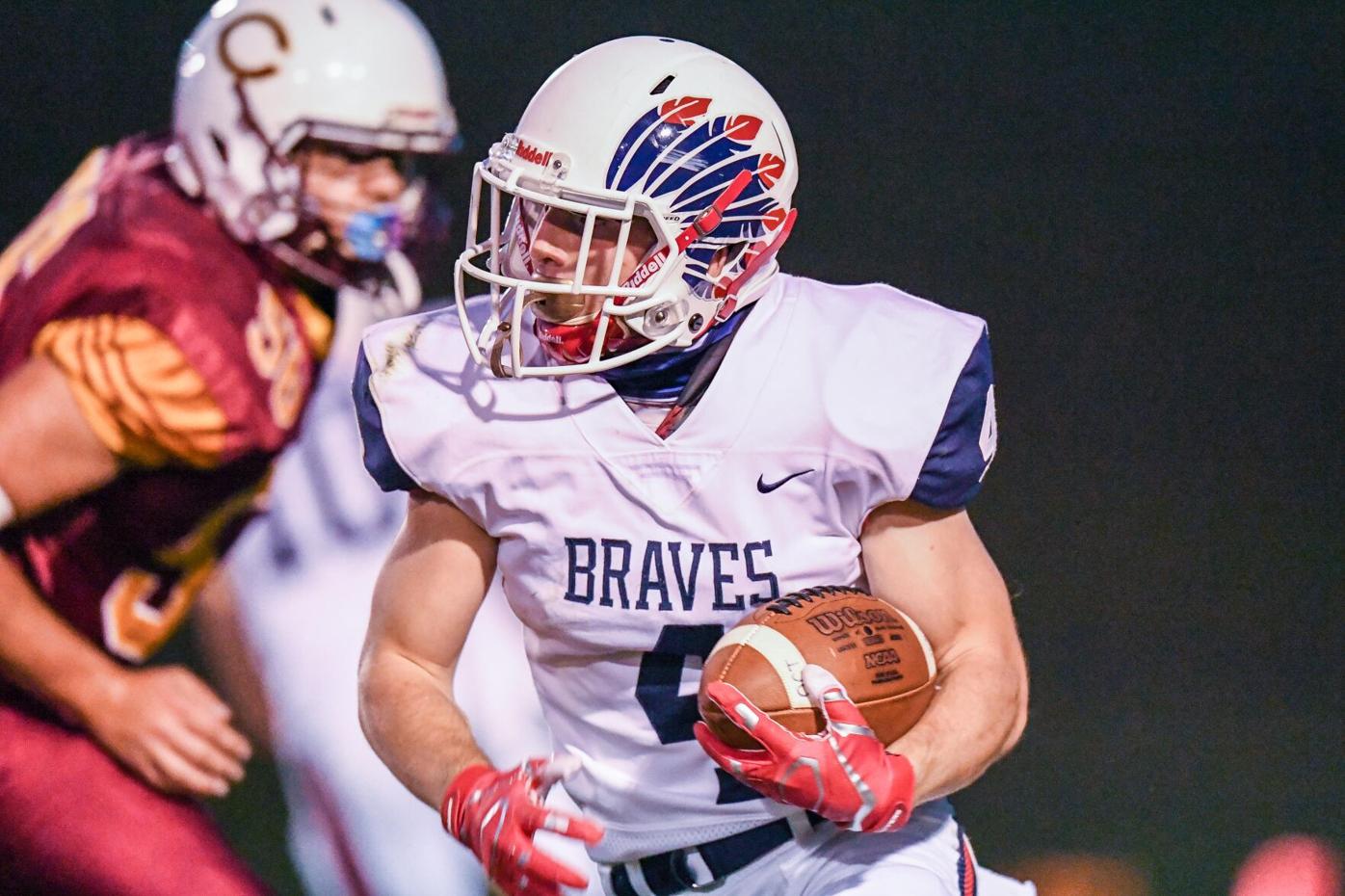 ATGLEN — Octorara football coach Jed King has a poster hanging in his classroom, and in the photo from a game taken several years back, you can spot the Braves’ ball boy on the sidelines, taking in all the action.

“Handing out water,” Octorara senior Mike Trainor said. “That’s what I did when I was younger.”

It is indeed Trainor, then circa age 10, in the photo. On the inside, he was yearning to play for the varsity. And when he finally arrived at the high school as a ninth grader, he immediately started paying dividends.

“I still remember starting that first game,” Trainor recalled. “I even remember the first drive (in a nonleague game vs. Pottstown). It was fourth and one and I got a tackle to force a turnover on downs. I was hyped up. I remember getting up and raising my hand in the air. That was my first tackle.”

And Trainor hasn’t stopped making tackles for the Braves. Now in his fourth season as a starting running back and safety, he’s earned plenty of street cred in Lancaster-Lebanon League circles as a tough runner and a lower-the-boom tackler. And as a player who never comes off the field and leaves every ounce of sweat in his body on it when the clock hits zeroes.

“For Mike Trainor, there is no off switch,” King said. “He does everything hard. He’s always working to improve. Yeah, he smiles and he laughs. But he has this serious nature about him. He’s one of those kids that’s really into it, because his ultimate goal is to be the best he can be.”

That drive comes from Trainor’s family. His parents, Mike and Toni, were multi-sport athletes at Garnet Valley High School in Glen Mills in Delaware County. Toni went on to play lacrosse, field hockey and run cross country for Lock Haven and then for Neumann University. Mike went to Williamson College of the Trades, where he played football and earned All-American honors for the wrestling team.

Trainor’s older sisters were also athletes for Octorara; Kim ran track and cross country and Verna played soccer and was on the cheerleading squad.

“It’s definitely a family thing with us,” Trainor said, smiling.

Football isn’t Trainor’s only gig; he reached the L-L League wrestling finals in the 145-pound class last winter, settling for silver. He went on to finish third in the District Three finals and sixth in the super-regionals on the mat, missing out on a trip to Hershey by two slots.

In the spring, Trainor is a sprinter, and he competes in the long jump for Octorara’s track and field team. He also grew up playing baseball. All of those sports and all of that working out comes back to Trainor’s drive and determination to be the best at whatever he does.

“It’s absurd, his work ethic,” King said, chuckling. “He puts in that kind of work. You put him in the weight room, and he’s just as strong as our biggest guys, and he’s 165 pounds. There’s never a letdown in his effort. He’s so passionate and he’s amped up all the time. He’s just an awesome kid, and I’m lucky I get to coach him.”

Trainor has carved out quite the career for Octorara. On the football field he’s amassed 1,619 rushing yards — including an 817-yard season last fall, when the Braves won a program-record six games — with a dozen TD runs, plus 141 tackles, a pair of fumble recoveries and an interception from his trusty strong safety spot.

“He’s a hunt and seek kind of a defensive player,” King noted. “He plays with so much intensity.”

Since the first day he trotted out on a football field.

“I remember when he used to come to our Octorara football camps when he was like 8,” King said. “He was a little guy, but even when he was little, he did every drill as hard as he could.

“Now, he’s been the glue for a lot of things on our team. As a leader he expects the other guys to do the right things. He encourages guys. He gets on guys when they’re not doing things the right way. Just the way he carries himself, they know that he’s the guy. We’re lucky to have a guy like Mike that steps up and leads.”

“You know,” King added, “he’s been waiting for this his whole life.”

From football camp as an 8-year-old, to ball boy, to starting in his freshman season for the varsity, to becoming a league all-star, to being recruited to play at the next level. It’s been a whirlwind for Mike Trainor. But he’s loved every single second of it.

There are a combined 20 games on tap for Lancaster-Lebanon League teams in Week Two of high school football. Three are on Thursday. Sixteen ar…

YORK — Octorara wanted to dominate up front, establish its rushing attack and play a clean game Saturday, when the Braves gassed up the bus an…

ATGLEN — Octorara has more than it has ever had, football-wise. But the Braves are far from content.

DILLSBURG — Octorara came up a yard short on Friday night in its District Three Class 4A first-round playoff game against Northern York.